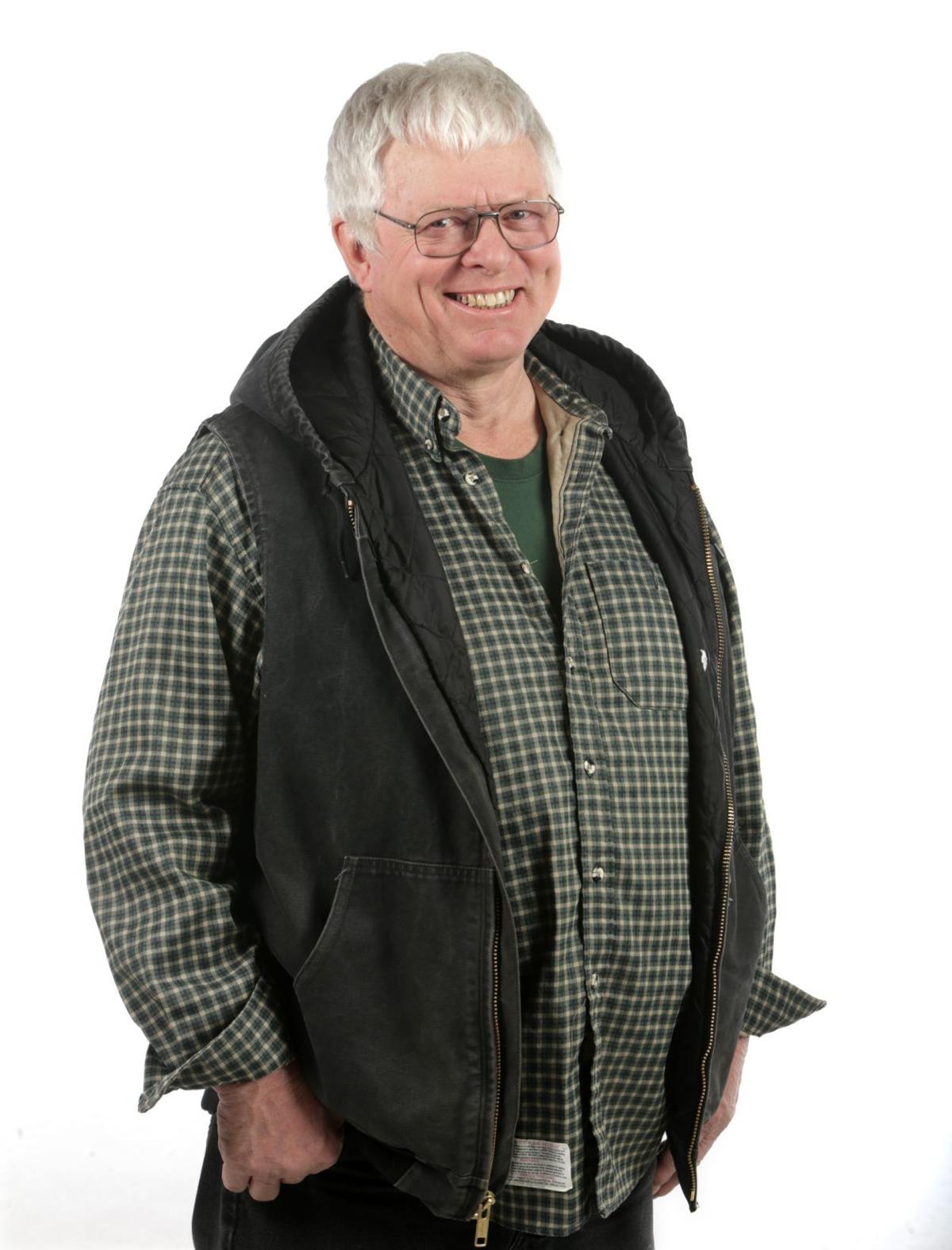 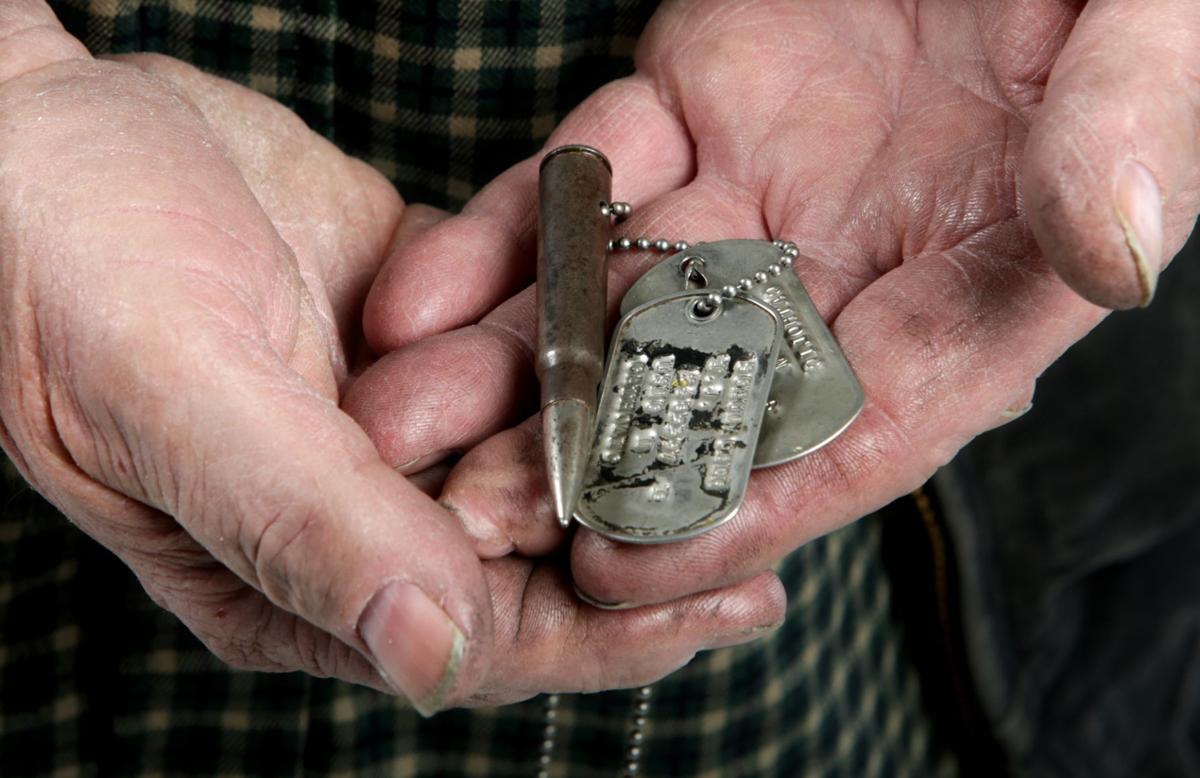 Vietnam veteran Tom Schumacher holds his dog tags and a bullet on a chain.

Tom Schumacher served in the U.S. Marines from 1968 to 1970. He was born and raised in Minnesota. This is part of his Vietnam story. For the complete interview, please go to billingsgazette.com/Vietnam

Gazette: In 1968, there's the Tet Offensive, and Vietnam is really on the public radar. Was it for you?

Schumacher: "No. If I was ever going to go in, the Marines were where I was going to go. I don't know why. Tet ’68 didn't mean anything to me until I got there, I guess."

Gazette: Then it was too late to do anything about it then?

Schumacher: "There were guys in my unit that had been in Hue City. I was with the Second Battalion Fifth Marines. They'd been there in Hue City in ’68."

Schumacher: "It was short. It had been cut down because they needed warm bodies. I wanted to say 12 weeks. It was a go, go, go thing. There was never time to mess around."

He went to Camp Pendleton, Calif., for advanced training in infantry, tactics. He was trained to be a truck driver, motor transport.

Gazette: Where did you land in Vietnam?

Schumacher: "We came in Da Nang Harbor. We knew we were going to get there overnight or the next day. The morning that we went out on deck, we were there and we could see the land. The first impression I had was that the country stunk."

Schumacher: "They got us off and got us on a little landing craft. They got us into Da Nang and remember going into Da Nang airstrip, dispersing or whatever it was called. I got orders from there to go Second Battalion Fifth Marines out at An Hoa (Combat Base). That was the first place I ever got rocketed — in Da Nang. They walked in — I don't know — a half a dozen right down the airstrip."

Gazette: It's one thing to train, but it's another thing to see it really happening.

Schumacher: "At first, you didn't realize what was going on. You have no choice in it ... At that time, there was nowhere to go. We were in the barracks and no one said anything and we were just there."

Schumacher: "They were supposed to get us down to 11th Motor (Division). We were supposed to convoy up to An Hoa, but that changed. They said the road was closed. That kind of rattled me a little. Ooh, this is not good. They put us on a helicopter and helicoptered us out there. We went down where the Second Battalion Fifth Marines was and got hooked up with the motor pool, and that was the second time I was rocketed, that afternoon."

Gazette: You'd been in country how long then?

Schumacher: "A couple of days ... There were bunkers to go to there ... I remember being in the bunker."

The base was six miles from the Cambodian border.

Schumacher: "I was never frontally attacked where I was at. I know the grunt companies were out in the bush and it was no picnic out there, I can tell you that. My job — most of the time — was to sit at the landing zone and the grunt companies would send in orders for food and ammo and whatever they needed out there.

"We'd go around to the ammo dump and pick up the ammo and pick up the C-rations, put them in nets, and the choppers would come in and hook on to that, and the (companies) would send back what they didn't use. That was my job for most of the time I was there.

"It was hot and dusty, terribly dusty. And when it rained, it turned to six inches of mud instantaneously, slimy. It would dry out overnight and it was weird. Then, it would be dusty again.

Gazette: What's that like being awakened in the middle of the night to move stuff?

Schumacher: "There's nothing else to do."

Gazette: They needed what things?

Schumacher: "In the middle of the night, there's no food run."

Gazette: So you were hauling troops, supplies, preparing them always? They were always in the field?

Schumacher: "There was always somebody out there. There was a time where the companies would be choppered in once in awhile. They'd want a ride back. The one time I remember...they crawled on a truck. There was room for 20 guys. There were 50 guys on it because they wanted a ride back...They were talking. They were bad-ass. They were scrounge. They'd been in bush longer than I had been in country which just amazed me."

Gazette: They were tough from being out there that long?

Gazette: When you're at base, do you become a target?

Gazette: When did that happen?

Schumacher: "Anytime they wanted to. Morning, noon, afternoon, night. There wasn't a time I wasn't rocketed."

Gazette: How do you learn to live with that?

Gazette: Then you ran to the bunker?

Schumacher: "Yes, and you always took your gun and ammo because you didn't know what was coming after it."

Gazette: So you're pulling guard duty or getting awakened or getting shelled, can you get any sleep in Vietnam?

Schumacher: "I slept through a rocket attack one time. I just slept through it ... After it was over and the all-clear was given, my (sergeant) came and woke me up."

Gazette: What did he say?

Schumacher: "We were about a half a mile, maybe a mile, away from main side, as I recall. They finally built a chow hall ... It was open 24 hours, pretty much, at least the lights were on. I remember the first meal we had there. It was spaghetti and some sort of vegetable and peaches. They had no plates or anything yet, so we had to bring your own container to put your food on.

"Remember those two-quart, plastic Kool-Aid pitchers with the handle on it? That's the only thing I had. I remember starting out there and they'd put the spaghetti and the meat sauce, the stuff on top of it. Then, the corn or peas or whatever the veggie was on that, and then we got down to the end of the dessert, which was peaches, and they scooped a big old gob of peaches on top of that and I thought it was great.

Gazette: What did you miss most about home?

Schumacher: "I want to say it was milk. When I got home, I used to go and sit on the steps there in front of the store in the little town of Dayton where my folks lived at the time and I'd go in and buy a quart of milk and sit there and drink that. I can remember chasing a convoy that came in from Da Nang. I was sitting to go somewhere. There looked like there was milk dribbling off the back of that, and I followed the truck and I got — scrounged — one of those boxes of milk from a milk cooler and took that back to the motor pool, and I was a hero."

Gazette: When you got back to the "world" what were you going to do?

Schumacher: "Probably buy a ’69 Dodge Charger with a 440, 4-speed and just have a good time. We used to sit around and do that a lot. We were going to do this or do that ... Cars, cruising Lake Street ... wine, women and song."

Gazette: Speaking of song, what did you listen to?

Schumacher: "Jimi Hendrix. I was a big Jimi Hendrix fan. Steppenwolf, the Doors."

Gazette: Are there any particular songs that take you back?

Schumacher: "The song that will put me back there in two notes, before I even recognize the song is (The Zombies) 'Time of the Season.' I'm there before I even know it."

Gazette: Are there any sights or sounds or smells that put you back?

" ... I had a brother that drowned, 10, 15 days after I was med-evaced out of ’Nam. I came back from the hospital for that. My dad and next two oldest brothers were standing out in front of the house. The Mississippi runs about a block away. I heard a gun shot. I was face down in the street before I knew it. I remember looking up and my dad is looking down. And he says, 'What's up?' And I said, 'There were gun shots over there.' And they said, 'No, we didn't hear anything.' But there was. I heard it."

Gazette: How did you get injured?

Schumacher: "Me and another guy took the officers down to the main side that night (May 1, 1969) what we called 'The Lifer Meeting' — the officers meeting. We were coming back. There was a place kitty corner across from us called 'Checkpoint Charlie' just a bunch of concertina wire and I forget, there was a bunch of Marines in there. I don't remember who, what, where, when and how about them. We were over by 'Liberty bridge' and I am sure they were there to keep the bridge from being blown.

"That night, Charlie was going to overrun them or they thought they were. They poured in a bunch of 'Willie Peter' — white sulfur rounds on them. We were getting some stray ricochets. We were heading back and it broke loose. I don't know.

"I reached outside the Jeep for a minute or the truck. I brought my hand back inside as we were driving along and I felt something and looked down and my hand was kind of mangled. That's about all I know about. It was within 18 inches of my head. I can't say I heard anything."

Gazette: Just driving along and you didn't even feel it?

Schumacher: "I don't remember it being painful. I guess I was in shock. I said to the guy driving, 'Hey, we better stop at the corpsman place and get this fixed.'"

Vietnam veteran Tom Schumacher holds his dog tags and a bullet on a chain.