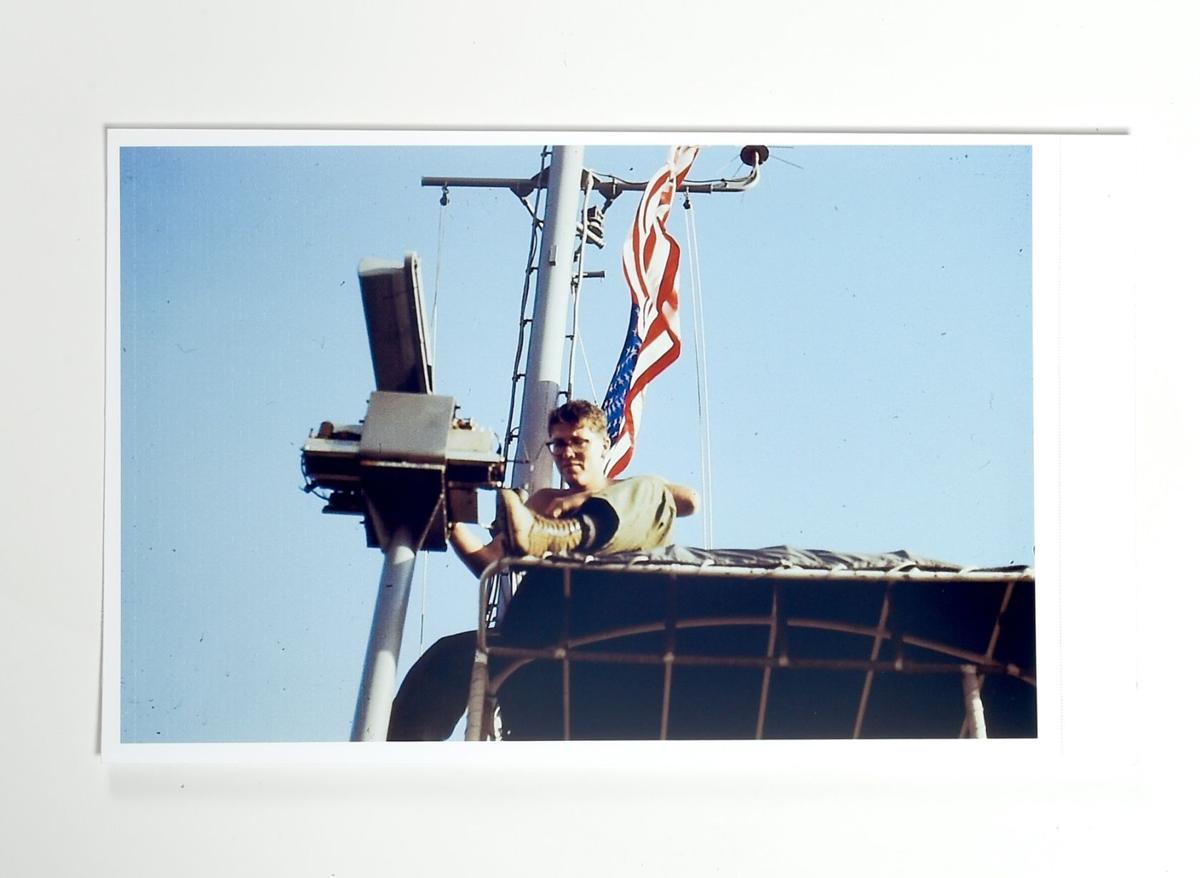 Vietnam veteran Wayne Bucher is pictured on top of a ship's mast. 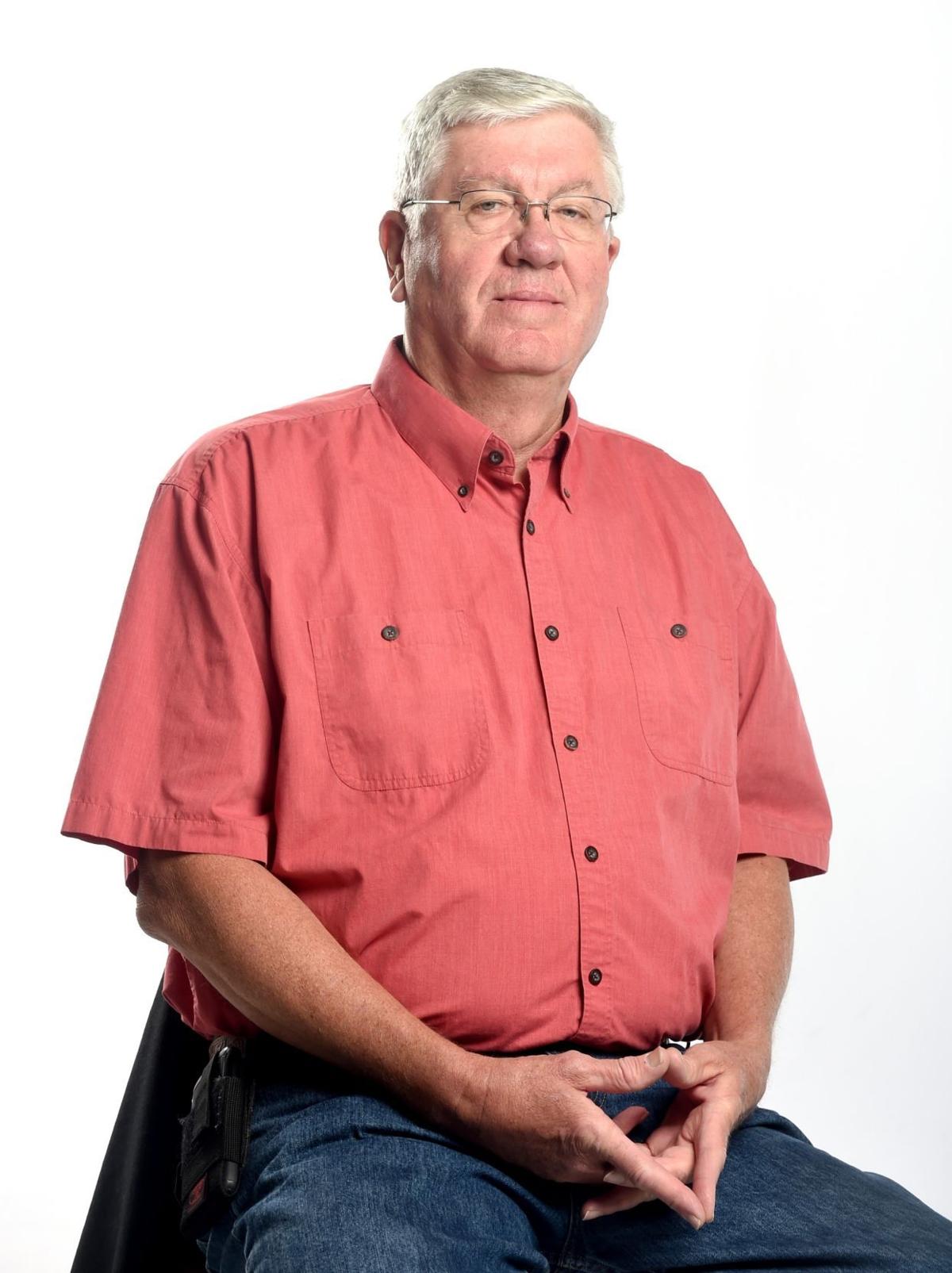 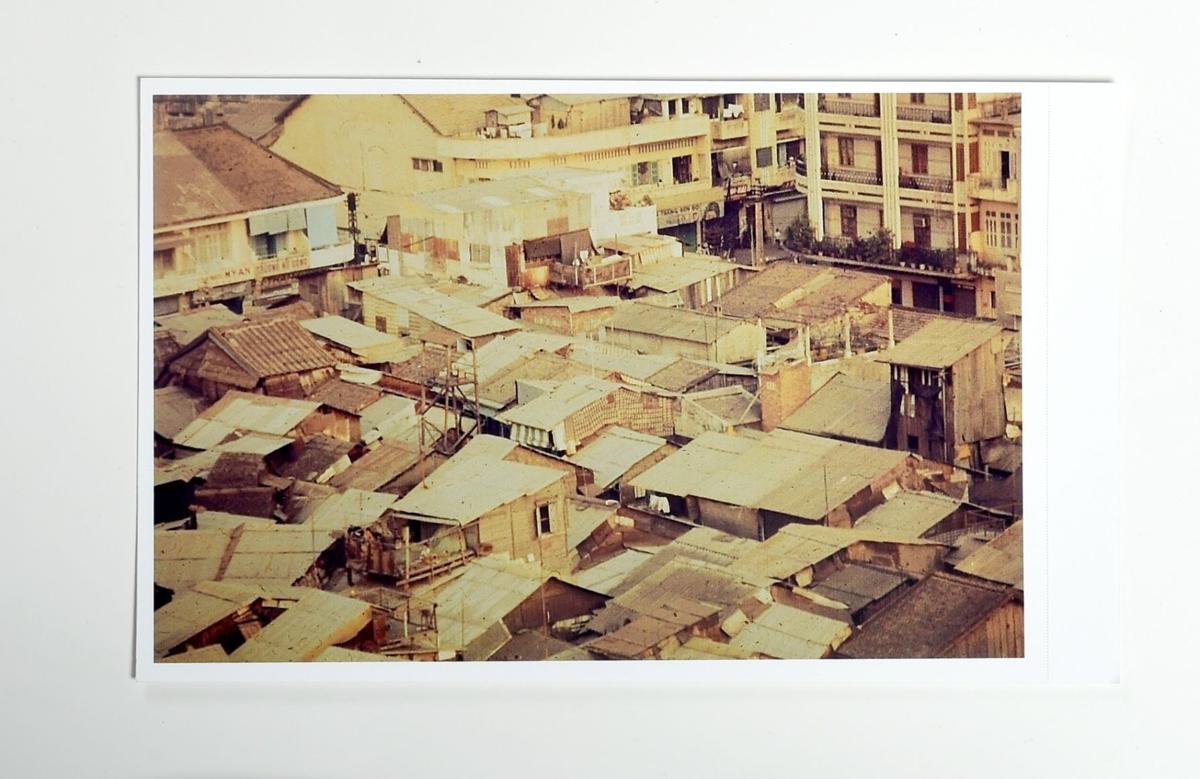 A photo kept by Wayne Bucher shows a view of a city in Vietnam. 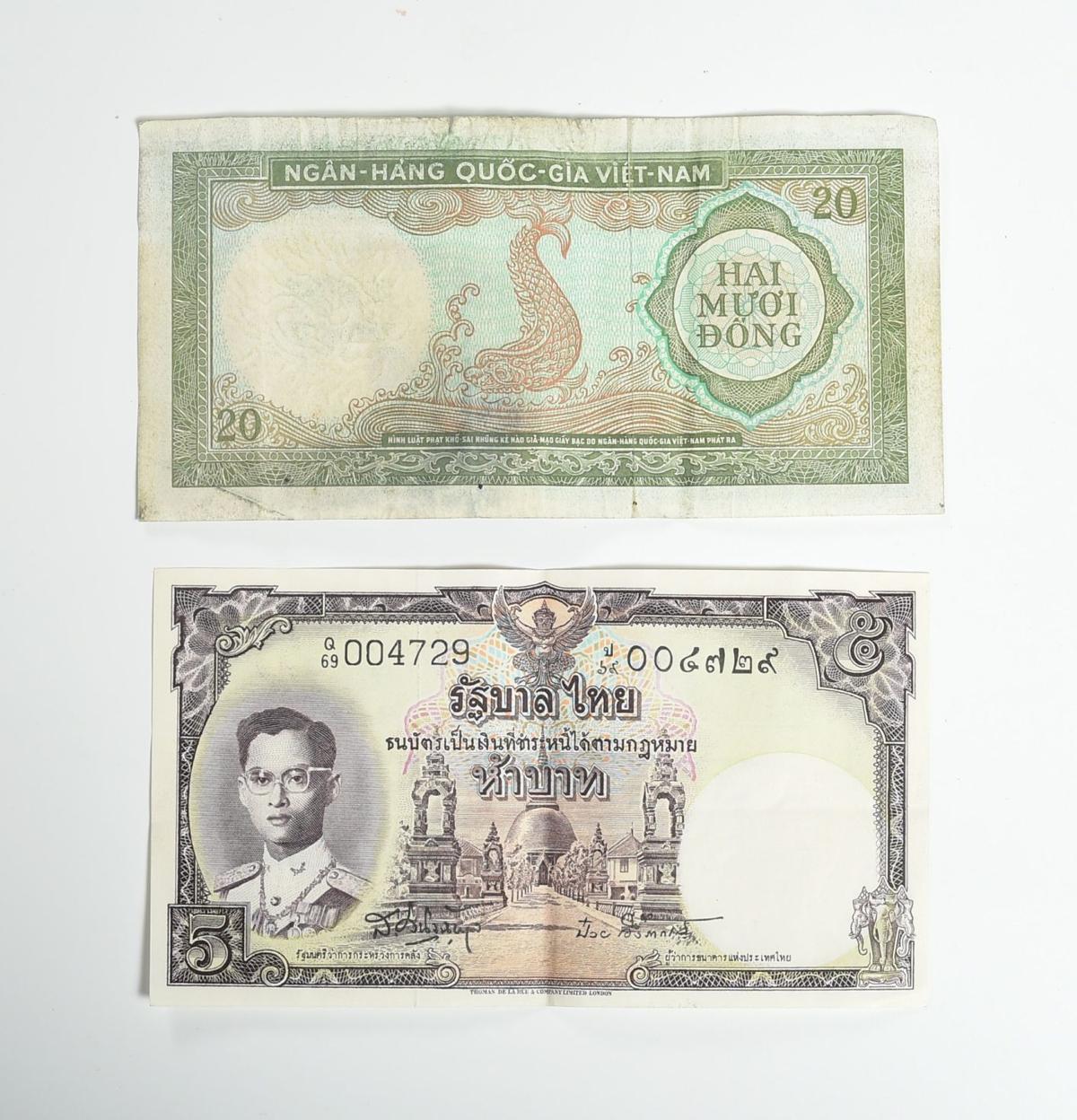 Veteran Wayne Bucher kept some money from the time he was in Vietnam. 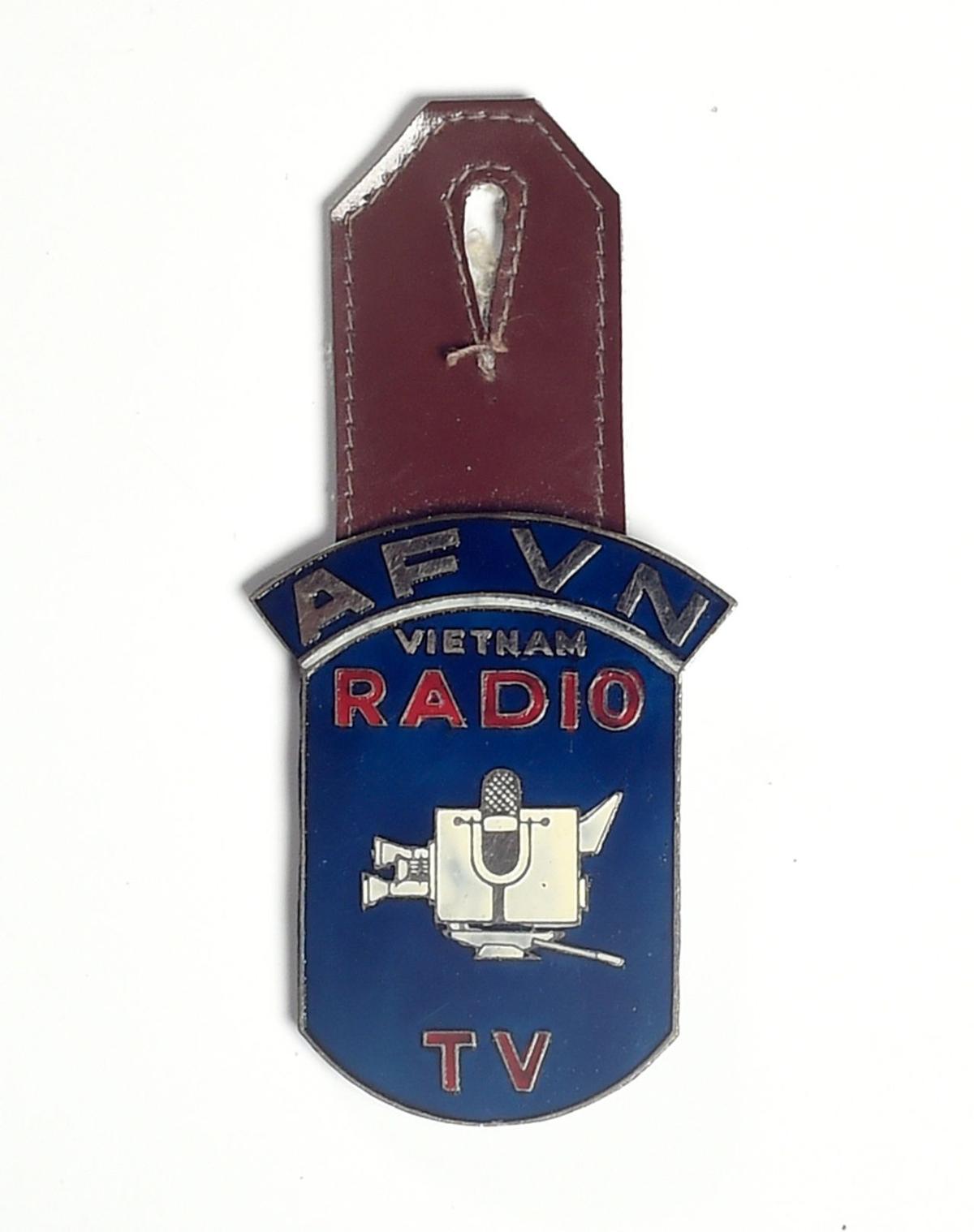 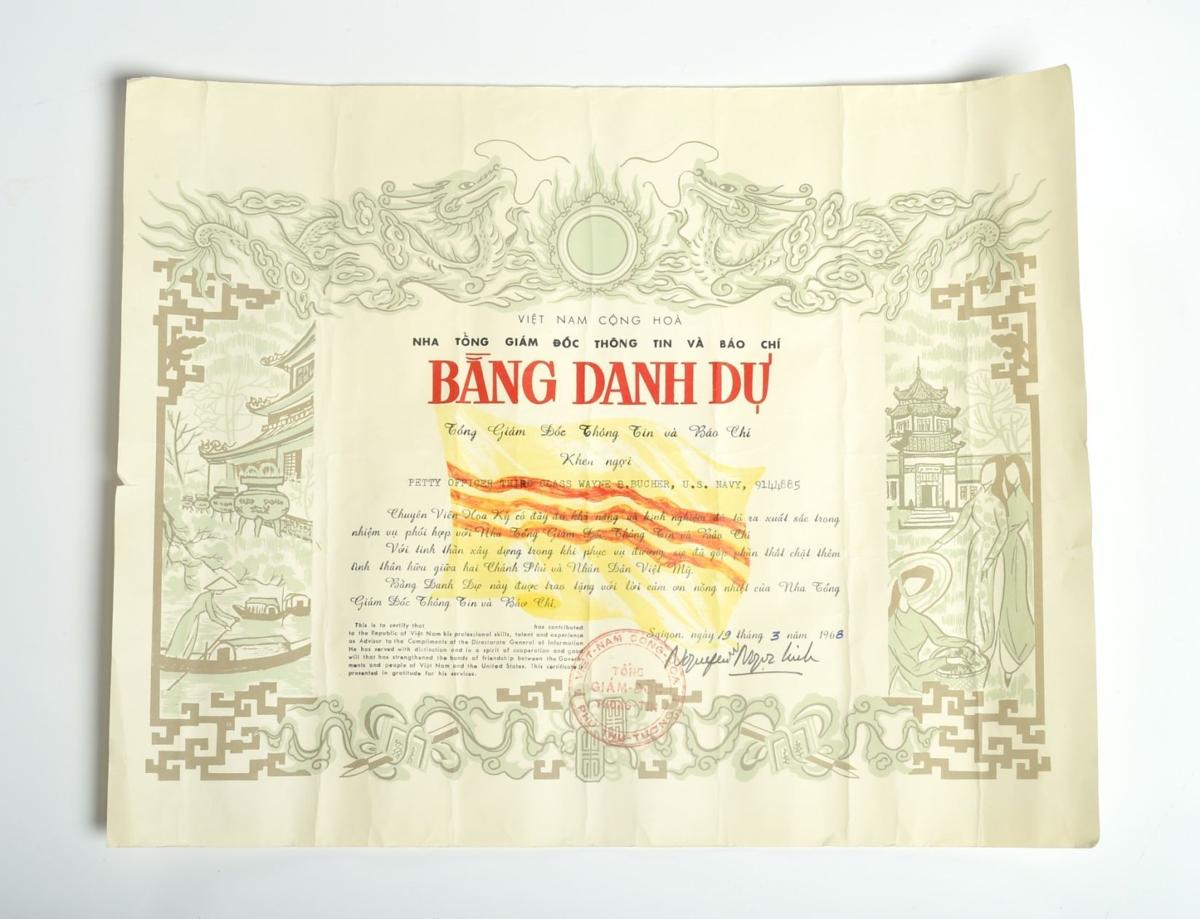 Wayne Bucher was in the U.S. Navy from 1964 to 1968. He was born and raised in Winchester, Va. This is part of his Vietnam story. For the complete interview, please go to billingsgazette.com/Vietnam.

Gazette: Did you know about Vietnam when you enlisted?

Bucher: "Yeah, it was out there. We knew about it. We weren't too far from our nation's capital. But it didn't appear to be anything, and it wasn't a concern. Everybody was still getting over the second World War and Korea. I was born at the end of the second World War and we had all the segregation stuff going on and being in the South, which Virginia is in the South, there was more emphasis there than someplace across the seas."

Bucher did basic training at Great Lakes Naval Training Center. He went to Memphis, Tenn., stationed at a base working a clerical job, working with the Navy's bureau of personnel in Washington, D.C.

Bucher: "About a year into it, (a colleague in the bureau) says, 'Wayne, I have bad news for you.' I said, 'OK, where am I going?' And he said, 'Vietnam.' I said, 'Where?' He said, 'Da Nang, Naval support.' So when I got done with him, I talked with the chief and the lieutenant and I don't think the words were out of my mouth when they were back on the phone to (the Bureau of Personnel) trying to get that changed. We were family (in Memphis). There was nothing they can do. They tried.

"... I get my orders to Blue Creek, Va., for three weeks of training. We fired every weapon we had. We got to use a rocket launcher. ... The first two weeks were training, and we learned customs and we learned about booby traps. It was a hodge-podge of stuff that doesn't hurt to have for the city boys and country boys. It was good training."

Bucher: "It was hot, humid and stinks to high heaven. ... It was hard to breathe. ... It was just the smell of the country. I can walk by a Thai restaurant and don't go in it, because it's all the same in my mind. It smells like boiled rice and bad sneakers, I don't know. It's just not a positive thought. ... Smell, taste and sensing are the high-end things we remember."

Gazette: Are there sounds or sights that put you back in Vietnam?

Gazette: I've heard a lot about those.

Bucher: "I used to talk with the (underwater demolition specialists) that I had run into and he was talking about snakes and he used to say that there were 99 varieties of snakes over there and 98 of them were poisonous and the other one would eat you alive. Exaggeration, but the point was taken."

Gazette: Did you see a lot of snakes when you were over there?

Bucher: "No. I hated snakes. ... You checked your boots daily in the morning before you put them on."

Bucher: "We mostly hitchhiked. It was the fastest way to get around ... Mostly with other government vehicles. We didn't get on anything that had a Vietnamese driving, trust me — in more ways than one. They weren't safe drivers."

Gazette: You had said that you didn't know what you were doing. Was it on-the-job training?

Bucher: "Oh yeah. Big time. Needless to say, I wasn't thought of very well. I didn't ask to come here, people. I didn't ask to be passed to get my E4 stripes. Their thinking is — and I understand in retrospect — what the hell are they doing sending this stupid person that we had to train to do a job here? I mean: I can understand that. So, in retrospect. But, at the time, it was hard — very hard.

Gazette: If a radar breaks down, you have to figure out what's wrong?

Bucher: "The radar units were on top of the mast, 50 or 60 feet in the air. The (new guy) got the safety belt. There was one. There are no ladders or steps to the top of the mast. You took a couple of tools that you'd thought you need.

"... We weren't designing these things, we were repairing them in place, and they were always breaking. ... The new guy gets the belt and up the side of these steel masts were clips every two inches that support the cables that run up the mast that feed the radio, antenna and the lights. You strap the belt around the poll and you use those clips for your boots and you wear out your boots in a hurry.

"You go up the mast. If you're going without the belt, you just take your arms around the poll, like you would at the school playground if you wanted to climb up it. Now, when you got up there you had to use both hands. If you had the belt, you could lock your foot into those clips and lean back, and you're good as gold. The other guy, he's got to wrap a leg around yard arm that's up there and he sits on that and locks into that so that he's got his hands free and we bring a rope up so if we need something on the ground, the other guy can ferry it up. You only want to go up and down one time to make this thing work. ... The boat moves a little with the movement of the water. On the deck of the boat, it's not too bad. Up at the top end of the mast, it's more of a snap, snap, snap."

Gazette: Are you worried you're going to become target practice?

Bucher: "No and yes. Not target practice. But, the Marines in their helicopters sure had fun with us."

Gazette: I am sure they did, especially since you're Navy.

Bucher: "They wanted to see how close they could get. Everybody wears fatigues. If they're wearing buttons, stripes or pins with their rank, everybody looks alike, but they figure, we're on a Navy ship and so we're probably Navy, and they like to see how fast, how close they can get with their choppers sometimes."

Gazette: How close could they get?

Bucher: "Very close, yeah. You couldn't quite touch them, because they knew they'd be in trouble if they got that close. It was all in a day's work, you know?"

Bucher also spent time helping to construct a television station to be used for the South Vietnamese government. He began working on the station in late 1967. It was being built in Saigon.

Bucher: "Saigon was a beautiful city. ... We were working along with our construction job and so forth, and all of a sudden, there was something changed. Something happened."

Bucher: "Pretty close. Yes ... if you imagine a city of four million people, people on the street, camps, motorcycles with a whole family on it. Literally, there'd be a motorcycle with five people streaming down the street, in town. This is a normal day. There are people everywhere, just like there is in Billings, but more so. But the whole city was alive and then, overnight, nobody on the streets. Nobody. You see some government vehicles running around a little bit, but everybody went in and stayed in and shut the doors. And, I think they turned off the lights. I mean, it was spooky."

Gazette: And you're not receiving any information about what was happening?

Bucher: "No. I hadn't received any mail from home. Because if you wanted to find out what was going on in Vietnam, I had to wait until my folks told me what was in the news. Of course, some of the things that were going on in Vietnam that I was privy to, they never heard about."

Gazette: Then what happened?

Bucher: "After about a day or so being in our hotel with no food and no weapons and an Army guy down in the lobby that had two clips — I'll say he had two clips, I don't know, but he didn't have a lot. None of the guys I worked with had the same billet, he had a .45 and we did kind of get together one day and we said, 'We have to get out of here.' So we walked four blocks over to where the food was."

Gazette: Were the streets still deserted?

Bucher: "Totally. Then we ran into an Army patrol and they said, 'What the hell are you guys doing here?' We said, 'We're getting hungry.' He asked where we were coming from and we told him and he said, 'Stay close to the buildings.' Trust me, we couldn't have gotten much closer unless if we would have been a coat of paint on the side of the building.

"... I know some point in the timeline, that one night they actually gave us weapons and we were standing watch on the roof of our billet. The enemy does not have air control. Why are we up here? There's nothing that's going to happen up here except that we're sitting targets. ... It was dark and there were the gutters keeping us up there and we were leaning against the roof. That's kind of spooky, too. But, we were young and stupid.

"(We were) watching the helicopter flying and he was firing into the ground into a park area, I think, because it was dark. It was a solid stream of red light coming out of that chopper that never quit. He had seen whatever. It was impressive. You could see looking around, a lot. There was another time in that period that this was going on that I was downstairs, talking to the Army guy out front. I was standing there, but there was a Vietnamese person of interest across the street limping. I still possibly think that he wasn't of South Vietnamese military type. My guess is that he was from the other side, but he had been wounded apparently but he wasn't a threat to us and we weren't bothering him."

Vietnam veteran Wayne Bucher is pictured on top of a ship's mast.

A photo kept by Wayne Bucher shows a view of a city in Vietnam.

Veteran Wayne Bucher kept some money from the time he was in Vietnam.