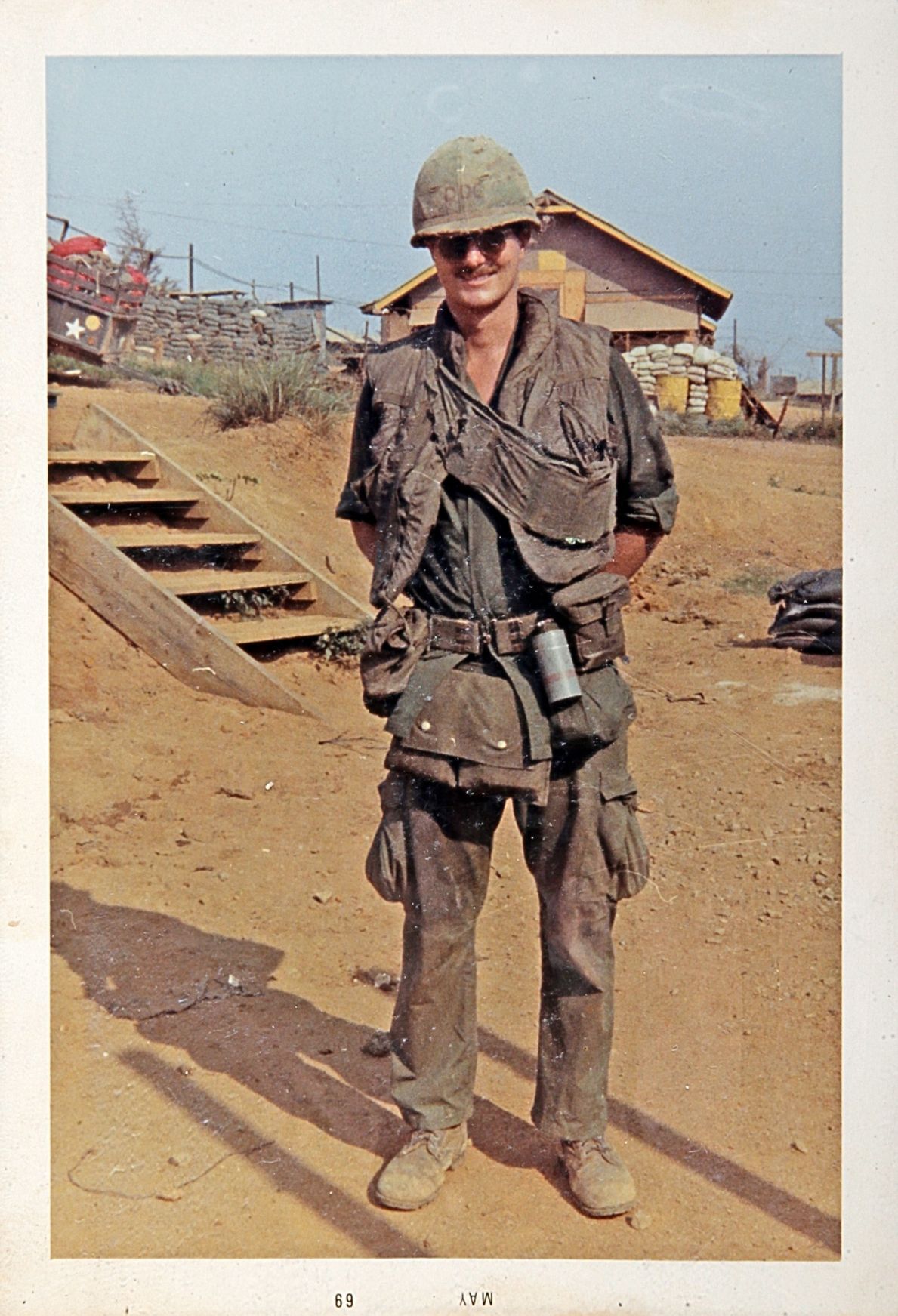 Veteran Clint Whitmer is pictured in his gear in Vietnam. 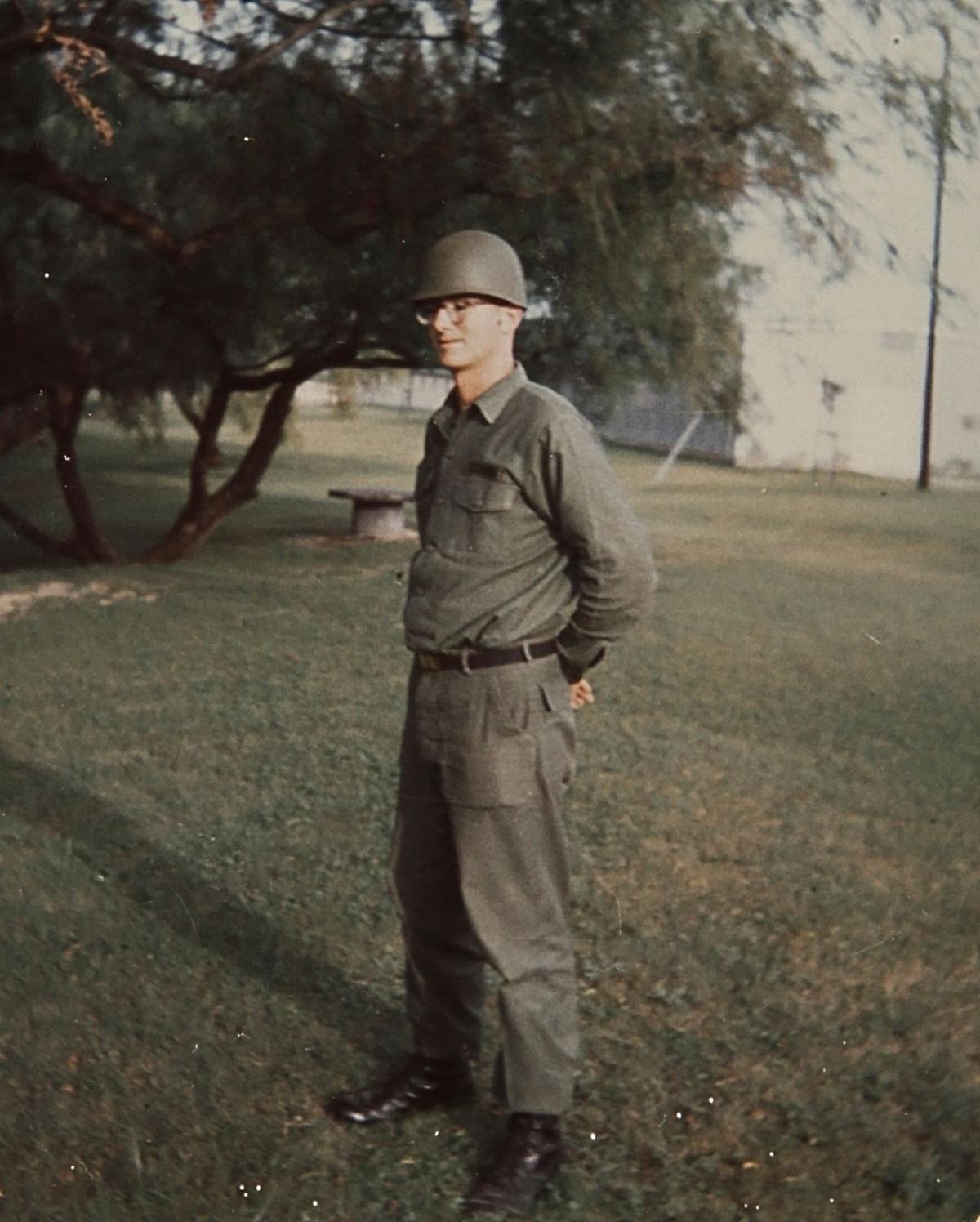 Veteran Clint Whitmer poses for a picture in his Army uniform. 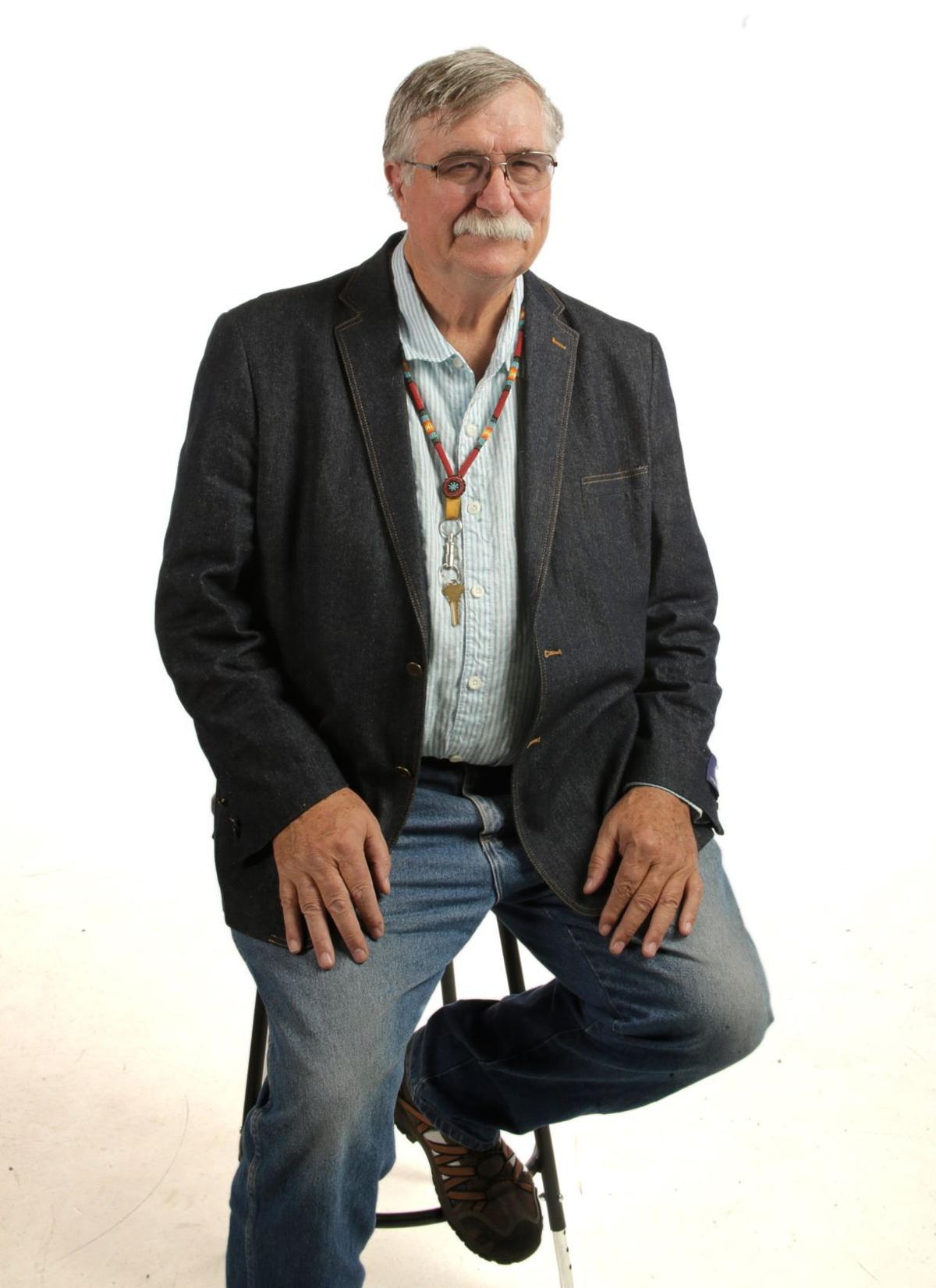 Vietnam veteran Clint Whitmer was drafted into the Army in 1968. 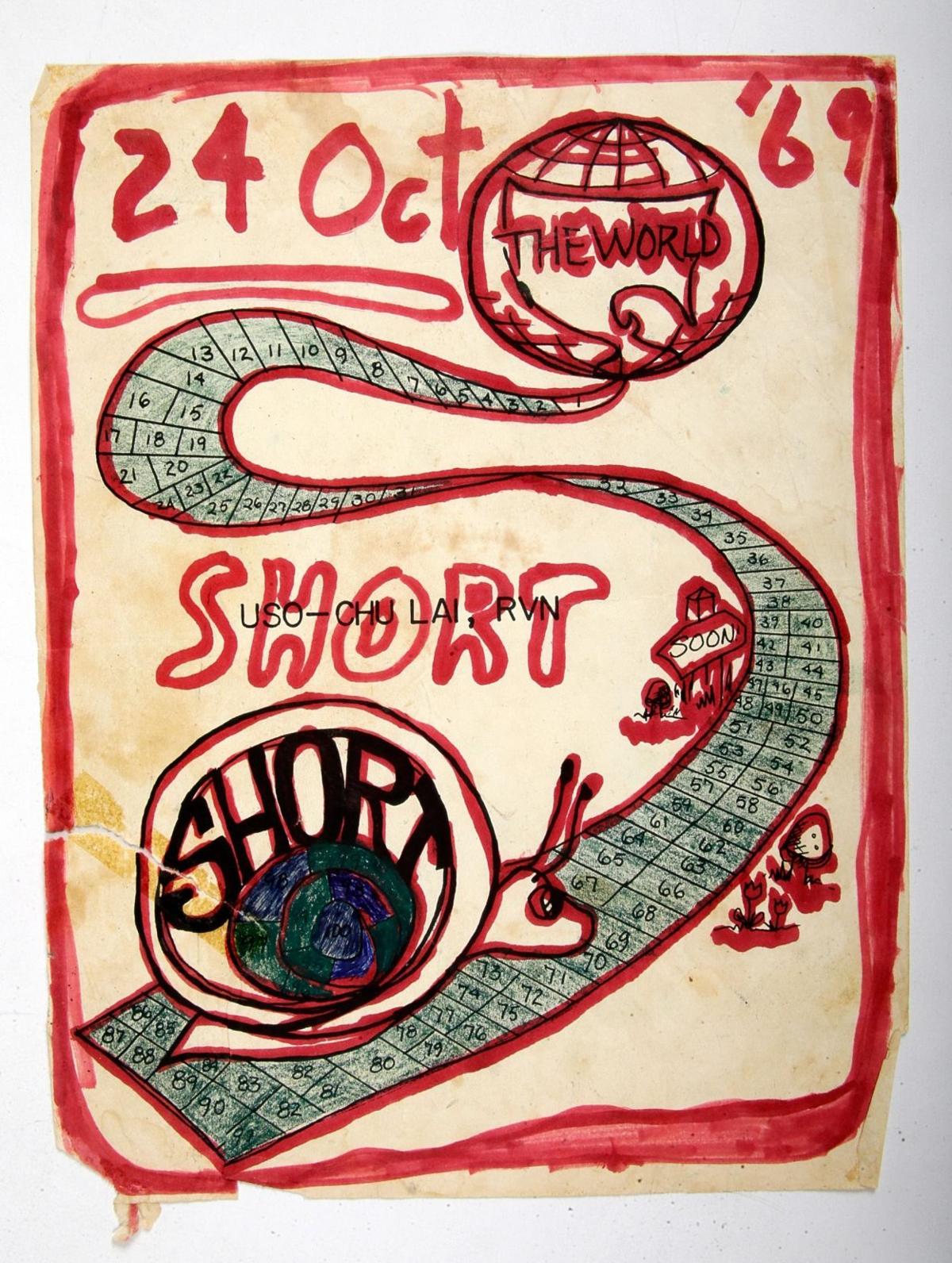 Clint Whitmer’s Vietnam calendar is pictured. Many soldiers made a calendar, checking off the days until they could return back to the United States, or “the world.” Oct. 24, 1969, was his “DEROS” date — date expected from return overseas. As soldiers drew closer to that date, they became “short” — itself a shortened way of saying “short timer.” 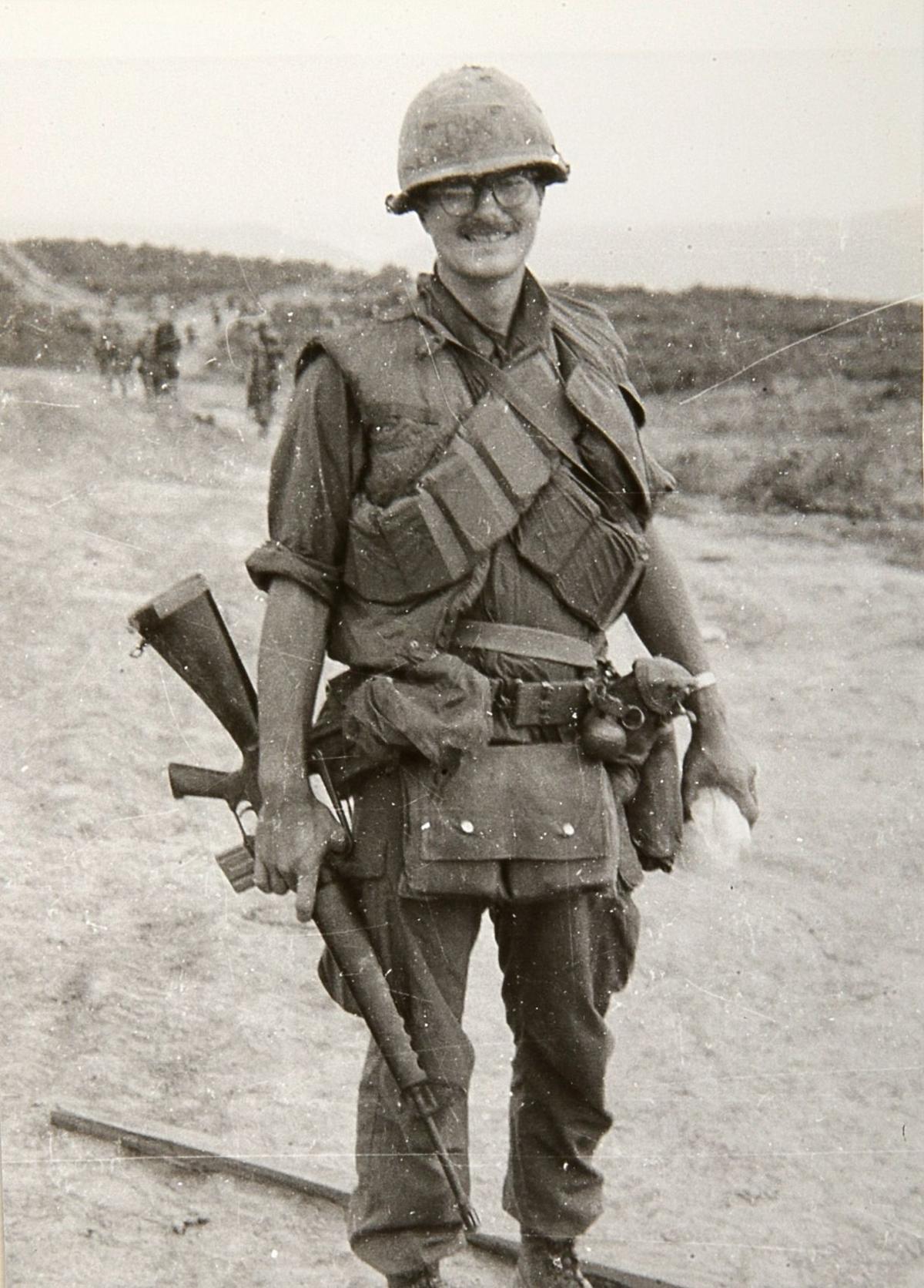 Clint Whitmer served in the U.S. Army from 1968 to 1969. He was born in Glendive and now teaches high school in Frazer. He was drafted after college.

Whitmer: “My father had had a heart attack, and I was the oldest of nine. I was actively engaged in drilling water wells and helping my father run his farm. ... I told them I wanted a hardship deferment to help my father and they said, ‘Well, your younger brother turned 18 and if he doesn’t do something, we’re going to draft him too. So, you are gone.’ I had to submit to the draft.”

Whitmer: “Yes, but at the same time, my father had served and my uncles had served, so there was no doubt that I was going to have to serve. That was just the reality of my family.”

He went to medic’s training at Fort Sam Houston. Then he flew into Pleiku.

Whitmer: “The back door (of the plane) was opening, and it was just so green that I had never seen anything like that. The pilot had said, ‘If the red light comes on, put your head between your knees.’ We took off again and landed at An Khe and ... it was home to 173rd Airborne.

“There was a platoon that was sleeping there on the red earth, just very tired. Obviously, they’d been out on an operation, and we dropped off some new boots there and then we flew to Chu Lai. ... We were landing there, and I got out of the C130, and I got out and looked up, and here was plane coming in. ... He was coming down and coming down, and he didn’t have any landing gear on his left side. I went, ‘Wow, he can’t land.’ And so the control tower told him he didn’t have any gear on his left side, so kicked in those afterburners and flew out over the South China Sea, and so I’ll never know what happened to him.”

Whitmer was assigned to the Americal division.

Whitmer: “I was assigned into what they called a ‘pacified area.’ You’re supposed to keep the enemy from firing rockets into the Americal headquarters in Chu Lai. ... We were supposed to interdict those people trying to send rockets in.”

Chu Lai had both Viet Cong and North Vietnamese Army soldiers active near it.

Gazette: If there’s some apathy among soldiers, why is that?

Whitmer: “The thing about it is: When we’re in Fort Sam Houston, they said, ‘You have to go over there and kill all those mother-rapers and baby rapers.’ You get over there and find out that Ho Chi Minh is father of his country, that he went to college in Paris. You realized that Vietnam had never had home rule. It had always been ruled by China or Cambodia or a neighboring country. ... So you find these things out and that Ho Chi Minh is Vietnam for the Vietnamese. ... The American political thought is that communists are bad, communists are whatever.

“... In the end, it was just going to be (the North Vietnamese). They knew that. And then, 10 years later, that is what happened.”

Gazette: Are you thinking about the politics of the war as a soldier?

Whitmer: “You were there as a soldier. You have a duty and an obligation to see that all the fighting soldiers you are responsible for go home after one year. That is what you’re responsible for. Politics doesn’t enter into that. Nothing enters into that. It’s just keep each other alive for one year.”

Gazette: What’s an average day like? About 50 miles south of the border?

Whitmer: “We were against the coast. Highway 1 was between the ocean, the South China Sea, and the mountains in the background. ... We had rice paddies. Then, against the mountains, we had dense jungle. On the coast you had sandy beaches and I remember thinking, ‘Man, I could just see a 20-story hotel here.’ The beaches were so nice. I body surfed in the South China Sea, and it was just wonderful.

“Our modus operandii became setting booby traps. In the day ... we’d cook some C-rations. The helicopter would come and it would have hot chow and water. ... In the evening, the command chopper would come and they’d drop the overlay, which was the evening’s directions. (The directions) would be in a spent canister for a hand grenade. You would pull it apart and the directions for that evening’s operations would be in there. Our platoon leader would read that and say, ‘OK men, we’re ready to go.’

“We usually went 10 clicks at night. We would have radio watch. We’d have two or three places we’d have to set up during the night. In the morning, we’d have to walk 10 kilometers again to walk to a different area to receive instructions for a different place. Then, every once in a while, they’d send you for a stand-down and you’d get a steak.

“As a medic, you have to upgrade the shot cards. I would have to give shots. We’d always have two or three guys who would say, ‘You ain’t giving me those shots.’ ‘Well, you get a steak.’ ‘I don’t care.’ They would sit outside and drink water. They would not go and get their shot card updated and get a steak.

“... I had the power of life and death over those GIs, because if they came to me and they were complaining about something, I said, ‘No, you have to stay in the field.’ That means they had to stay in the field and get shot at. I never abused that. I was always fair and honest and always: If that’s what it is, that’s what it is. It came down to being a responsibility that you had to acknowledge and you had to do the best you could with it.

“... When you’re in a jungle, setting ambushes, that’s your home. You live in a jungle. The only time you get out of that is when you can catch the extraction bird and maybe you go in overnight and catch the next bird out or something like that. For those six months, the air mattress in the jungle is your home.”

Gazette: Is it miserable?

Whitmer: “I never thought of it as that. One day, the other platoons were going in for a stand-down. Our helicopter just kept getting higher and higher and said, “Sergeant, what’s going on? We’re not going in for a steak.’ He said, ‘Oh, we’ve got different orders.’ ‘What kind of orders?’ ‘Well, we got to go down south. The French have mined this area and they’re telling us that we have to be careful of any unexploded ordnance. ... We don’t have much recon and much radio because they don’t work out there.’

Pretty soon we land, and it’s like 20 miles south of any place we’ve ever been before. And we look around. Oh man, because it’s scrub jungle — small trees, pines and bamboo. That first day we’re walking towards a stream, and we look and we can see a path in the bottom of the stream. Is it going our way? Yeah. Well then let’s take it. We just dive into the stream, and it’s floating our backpacks so that’s kind of cool. We’re walking down the stream.

“I’m in the middle of it, and I hear this rustling in the bamboo and I looked up and it comes down and splash! What the heck? The next thing I know everyone behind me is out of the water. The next thing I know, I turn around, there’s this python snake crawling over this black soldier’s leg, and he’s the M60 machine gunner. He dives back into the stream with his rifle. He comes up coughing, pouring water out of his M60 machine gun. The snake is going off into the jungle. Those guys behind us would not get back into the water.They hacked their way down where we had to go.

“We never laughed in Vietnam, but that was one day that was pretty close.”

Vietnam veterans talk about their experiences in the Billings Gazette studio.

Veteran Clint Whitmer is pictured in his gear in Vietnam.

Veteran Clint Whitmer poses for a picture in his Army uniform.

Vietnam veteran Clint Whitmer was drafted into the Army in 1968.

Clint Whitmer’s Vietnam calendar is pictured. Many soldiers made a calendar, checking off the days until they could return back to the United States, or “the world.” Oct. 24, 1969, was his “DEROS” date — date expected from return overseas. As soldiers drew closer to that date, they became “short” — itself a shortened way of saying “short timer.”