Bryan Knicely, executive director of the Yellowstone Art Museum, has resigned. His departure will be in September, according to a press release sent out on Monday.

During his three-year tenure at the YAM, Knicely oversaw the popular art auction fundraiser, which drew the works regional artists and big names in the art world, including Renoir, Dali, and Picasso, as well as regional stars Kevin Red Star, Ted Waddell, Josh DeWeese, and others.

Knicely's long-range planning brought changes to the museum mission statement and set out organizational goals to increase access, engage the community, achieve sustainability, and preserve assets, approved by the board in November 2019. 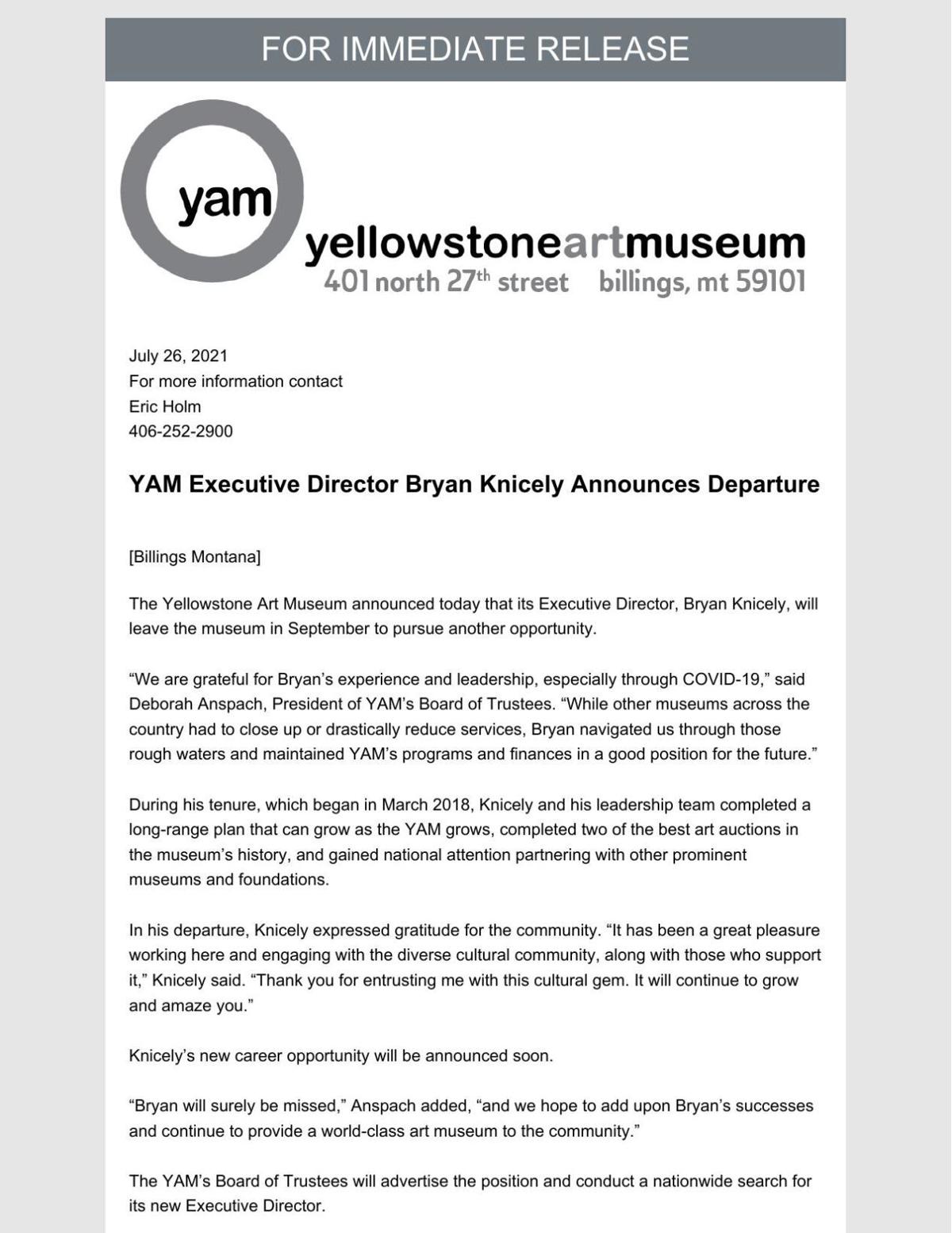 Under Knicely's direction, the museum broadened its focus beyond Montana and the surrounding region, bringing in artists for major solo exhibitions from the U.S. and Canada, including Michel Desroches, Clyde Butcher, and Jill Krutick. Major exhibitions of works by the late Montana modernist Bill Stockton and Wyoming's Neltje — the last major show the artist would have before her death in April — were also presented.

The museum also saw a refresh of the main floor exhibitions, including the Will James room, and changes in venue to the annual Summerfair fundraiser.

COVID-19 provided challenges for arts organizations across the country, and the YAM was not immune. In 2020, the museum made cuts to staff in the executive and finance departments. During the pandemic, the museum was closed to visitation, and responded to the challenges by investing in equipment to create 3-D tours of the museum and shifting educational classes to a virtual format.

The executive director position will be advertised and the YAM’s board of trustees will conduct a nationwide search for Knicely’s replacement, according to the press release. Calls to Knicely were not returned as of press time.

Even with changes, YAM's fundraising auction remains a tricky business

Tracy Linder has been listening to the voice of Montana’s prairies since she was young. On Nov. 12, she unveils a retrospective of her work at…

Frank Ferguson’s final piece of public art debuted shortly after his death. The Billings artist, wearing his western finery, and a smirk, is c…

Peggy R. Kelley was restless. She rarely lived in one place more than five years, and at age 80 landed in Billings where she would spend her f…

Big Horn County Attorney Jay Harris did not complete his annual Montana Continuing Legal Education requirements before the deadline, causing the State Bar of Montana to put him on inactive status.