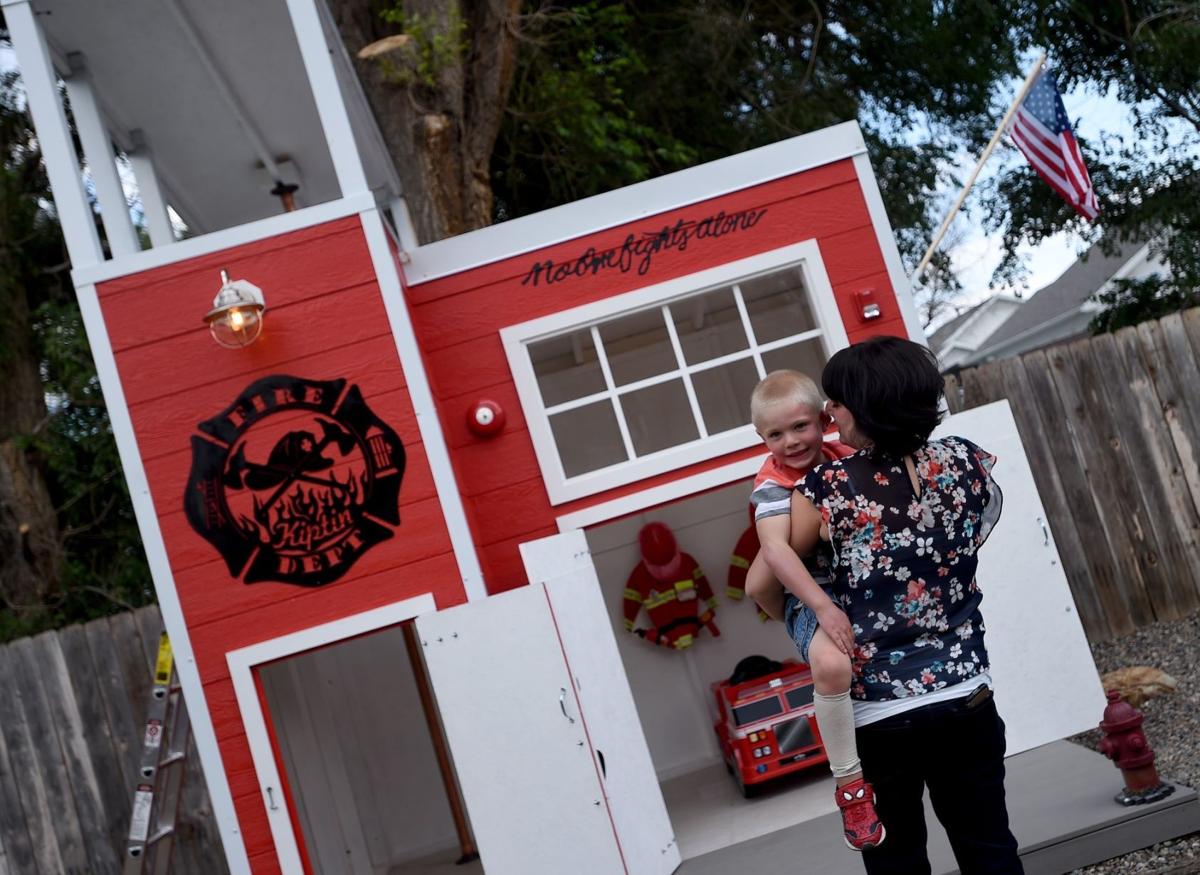 Shanteal Boeckel holds her son, Kiptin Boeckel, 4, as they look at his brand new donated fire station playhouse Thursday in the Heights. Kiptin was burned in a fire at his home on May 8 and spent four weeks at a burn unit in Salt Lake City. 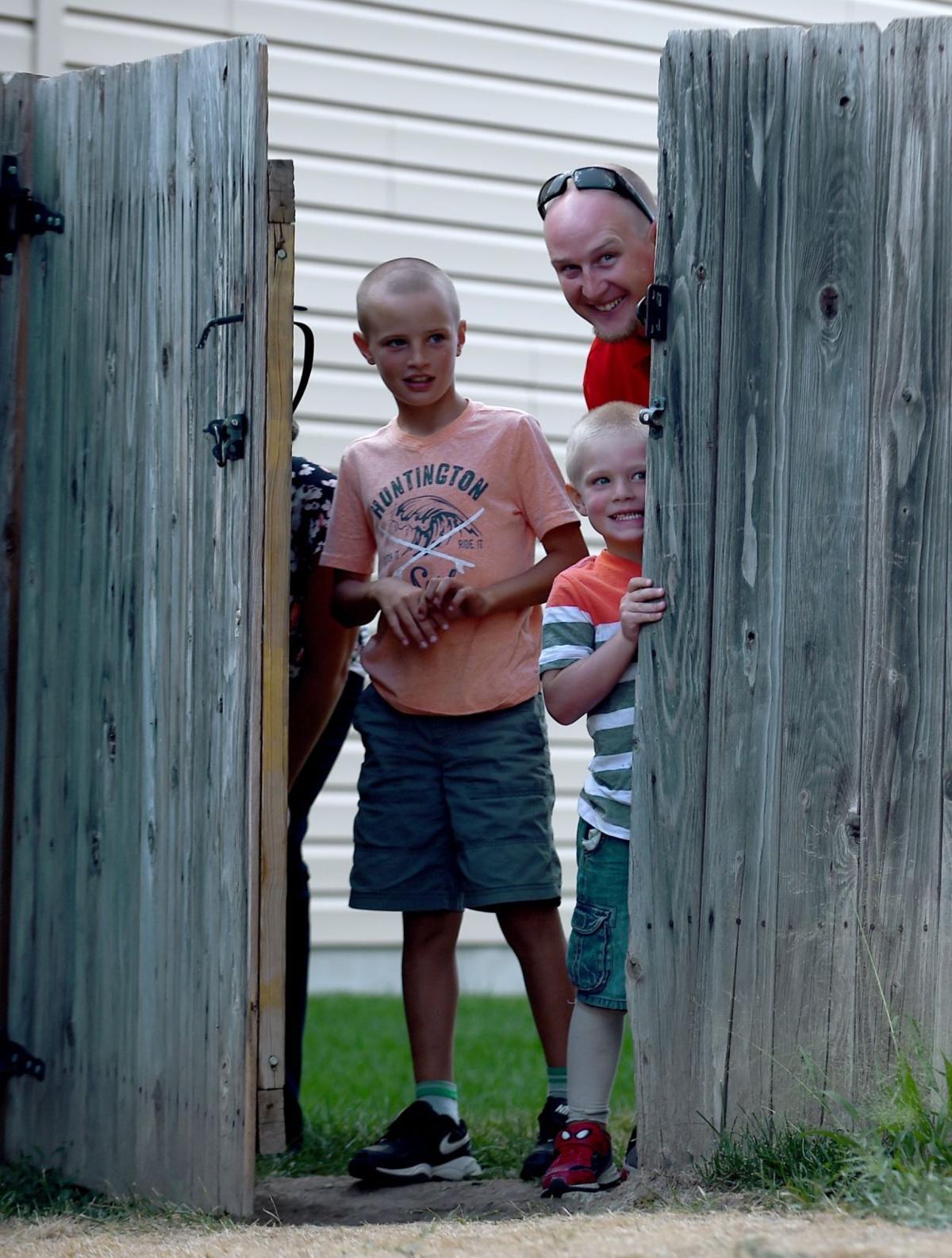 Kiptin, his older brother, Tayvin, 9, and father, Kelly, peek into their backyard to see the brand new fire station playhouse on Thursday. 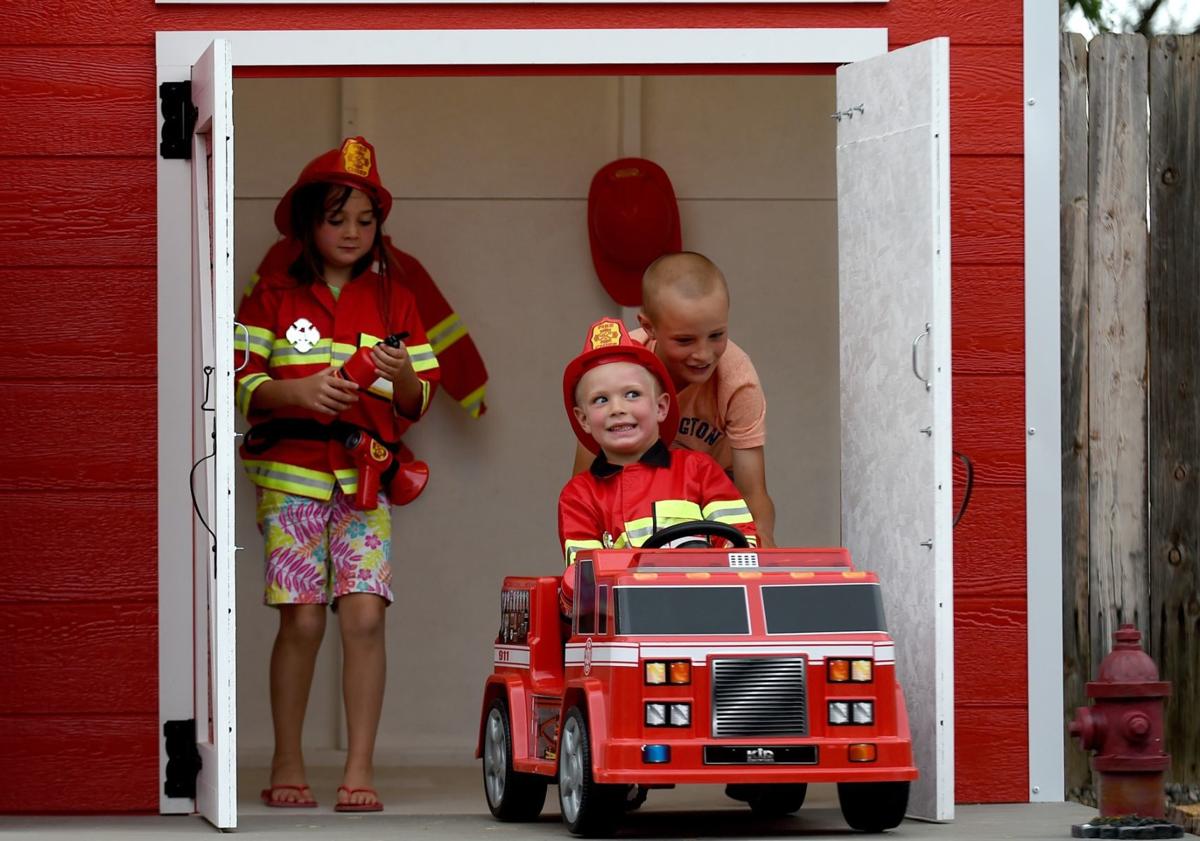 Tayvin pushes Kiptin in his new firetruck. The truck and playhouse were donated by Eggart Engineering and Construction. 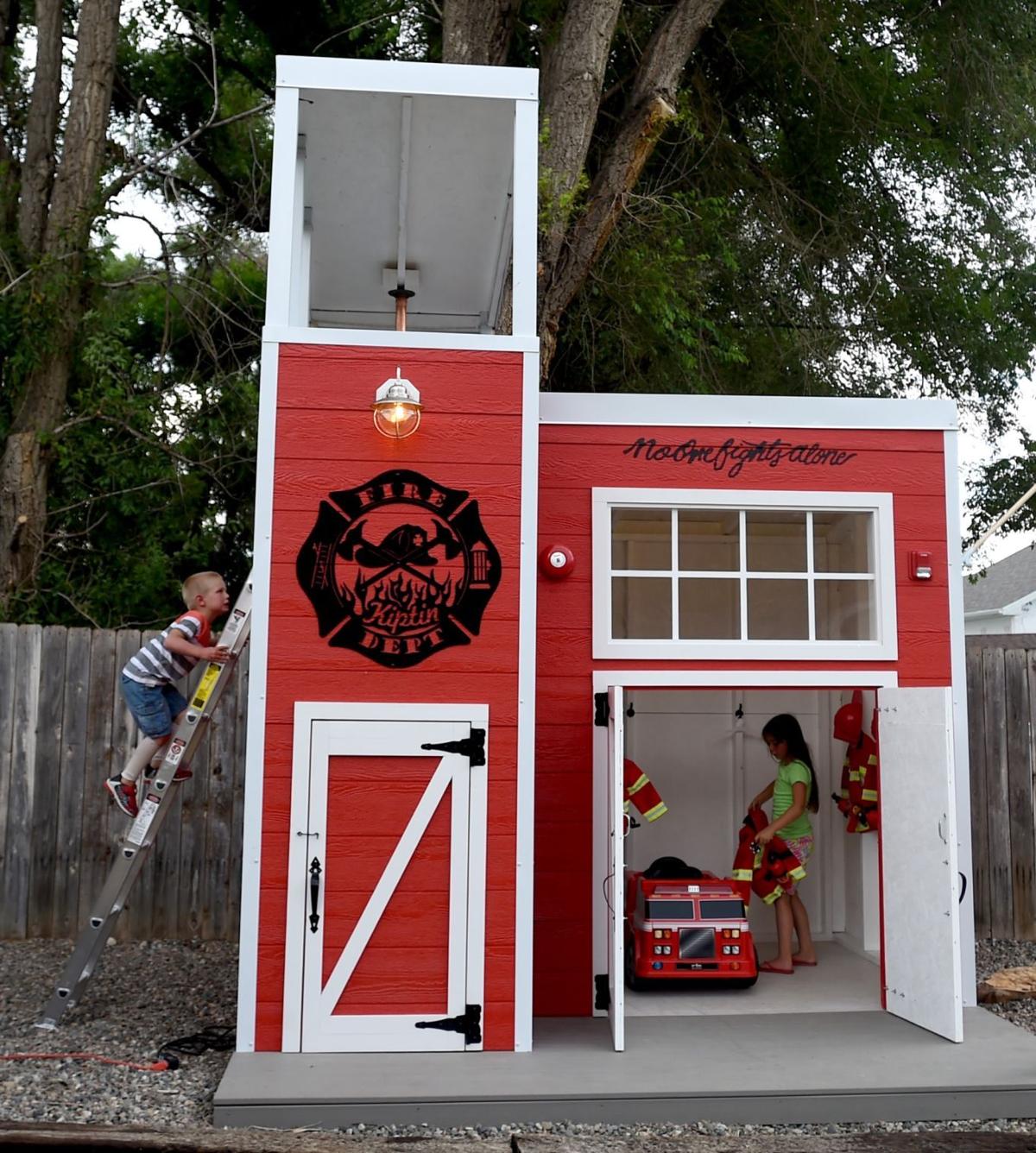 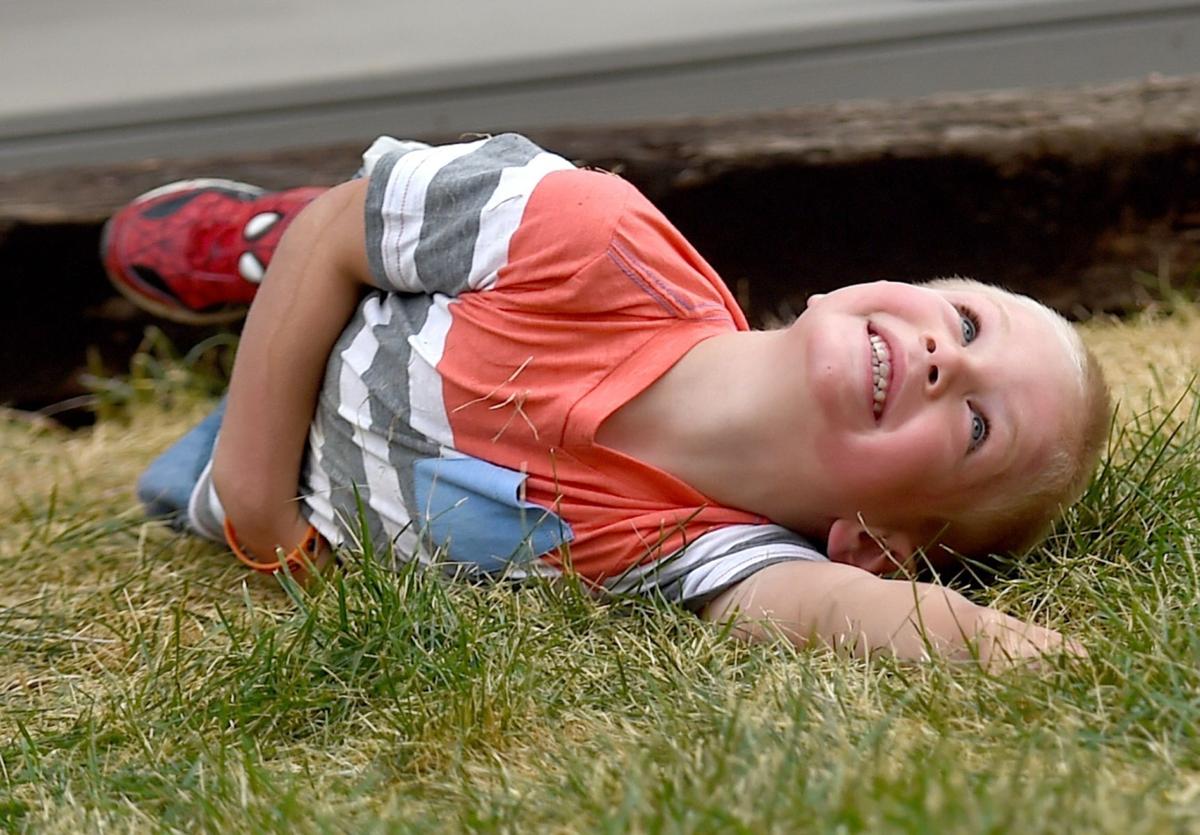 Kiptin Boeckel, 4, laughs in the grass Thursday at his family’s home in the Heights.

Four-year-old Kiptin Boeckel peeked around a fence into his backyard Thursday, a mix of confusion and delight on his face.

Next to his house on Jacque Lane, still a patchwork of plywood and green construction wrap, stood a new playhouse that he fell in love with only hours before a fire ravaged his home and sent him to a burn unit in Salt Lake City for four weeks.

Inside the playhouse Thursday, Kiptin gleefully slid down a fire pole, the wraps on his still-recovering legs not hindering him a bit. He and his brother, 9-year-old Tayvin, darted in and out of doors.

When Kiptin first saw the playhouse on May 8, it was displayed inside the Rimrock Mall as part of the Playhouse Parade, a fundraiser where local builders construct playhouses that are raffled off for charity.

Kiptin, then 3, was smitten by a firehouse model.

“When it was time to go, he freaked,” said his dad, Kelly Boeckel. “He was not happy.”

Kelly also received serious burns in the fire. He still has a wrap on his hand.

An explosion blew out the garage door and back window, flooding the rest of the house with smoke. Kiptin and his dad were sent to Salt Lake City for expert treatment.

“It was the hardest thing I’ve ever experienced,” said Kiptin’s mom, Shanteal Boeckel. “But it’s also the most amazing thing at the same time.”

Kiptin far exceeded doctor’s expectations. After receiving skin grafts on his back and calves, he recovered enough by the end of June to head home. He’s already taking swimming lessons.

Meanwhile, word had spread about Kiptin’s injuries and his firehouse fascination. Friends and well-wishers purchased tickets in Kiptin’s name. Workers from Eggart Engineering and Construction, the firm that built the playhouse, used money from recycling scrap materials to stuff the raffle box.

“Unfortunately, he didn’t win it,” said Darwin George, who organizes the Playhouse Parade.

Kiptin’s parents reached out to ask for the designs for the playhouse so they could build a version themselves. Instead, Quentin Eggart, who runs the company, stepped up.

Crews were working right up until Kiptin arrived at about 5 p.m. Thursday. Parts of the playhouse were pre-fabricated earlier this week, but some construction had to be done on site.

“We’re just kind of buttoning it together,” said Eggart.

The fire pole was secured only minutes before Kiptin arrived.

“This is exactly like a TV show,” joked George.

When Kiptin arrived, he was delighted to see the house but feeling shy in a yard packed with strangers. Inside the firehouse walls, any reservations fell away. He flipped on an alarm loud enough that he clapped his hands over his ears. He and his brother scrambled up a ladder to the second story.

Putting the family’s real house back together is taking much longer. Repairs are about halfway done, and the family is living in a condo for now.

“They don’t call it home; (the boys) call it the condo,” Shanteal said. “They enjoy coming up and seeing the progress on the house.”

Kiptin will still need to wear wraps on his legs for the next two years, and some scarring will remain. But young burn victims can make exceptional strides, and he’s already improved leaps and bounds. Burns on his face now just appear as a rosy complexion.

“He’s adjusted better than any of us,” his mom said.

He used to sport long, blond hair, but it was burned and shaved off after the fire. He’s keeping it short for now.

“He loves looking like his dad and his brother,” Shanteal said.

Kelly’s hand has recovered enough to nimbly adjust the strap on Kiptin’s plastic firefighter’s helmet. He ducked into the playhouse at Kiptin’s insistance, crouching over to avoid hitting his head.

“Our community and our support is huge,” he said.

But probably not as huge as Kiptin’s smile.

Inspiring stories from Billings and Montana

A 41-year-old Billings man has been arrested on rape charges.

Two women were hospitalized early Saturday morning after being stabbed during an altercation on the Rims.

The 21-year-old Billings man shot Monday night in the Heights has died in an apparent homicide, according to the Billings Police Department.

Man in critical condition after shooting in Billings' Heights

A Heights shooting late Monday sent one man to the hospital in critical condition, Billings police said on social media.

At least 43 of the 55 residents of Canyon Creek Memory Care Community in Billings, along with 15 staff members, have tested positive for COVID-19.

The COVID-19 outbreak at Canyon Creek Memory Care in Billings has led to three deaths since Monday, according to the Yellowstone County Health…

See who got money in our state from the Paycheck Protection Program meant to keep Americans employed during the pandemic. The program has been popular but also controversial.

Shanteal Boeckel holds her son, Kiptin Boeckel, 4, as they look at his brand new donated fire station playhouse Thursday in the Heights. Kiptin was burned in a fire at his home on May 8 and spent four weeks at a burn unit in Salt Lake City.

Kiptin, his older brother, Tayvin, 9, and father, Kelly, peek into their backyard to see the brand new fire station playhouse on Thursday.

Tayvin pushes Kiptin in his new firetruck. The truck and playhouse were donated by Eggart Engineering and Construction.

Kiptin Boeckel, 4, laughs in the grass Thursday at his family’s home in the Heights.