Thirteenth Judicial District Judge Gregory Todd said in a written retirement announcement, he reached the decision after discussions with family and doctors. His last day on the bench will be Dec. 31, 2021.

“When I started this job, I told my friends that I would not overstay my welcome,” Todd wrote. “That time has come.”

Todd has served as a judge in the county for nearly 21 years. In 2000, he was appointed by Republican Gov. Marc Racicot to replace then-retiring Judge Maurice Colbert. He left a three-year job as a deputy county attorney in Bozeman, and has held the bench ever since. Before Bozeman he was a private practice attorney in Billings for 20 years. He earned his J.D. from the University of Montana in 1977.

“It has been a privilege to serve as a District Court Judge in my hometown for 21 years,” Todd said. “My approach did not favor the state or defendant in criminal cases or the plaintiff or respondent in civil cases. It was just to dispense justice as fairly as possible.” 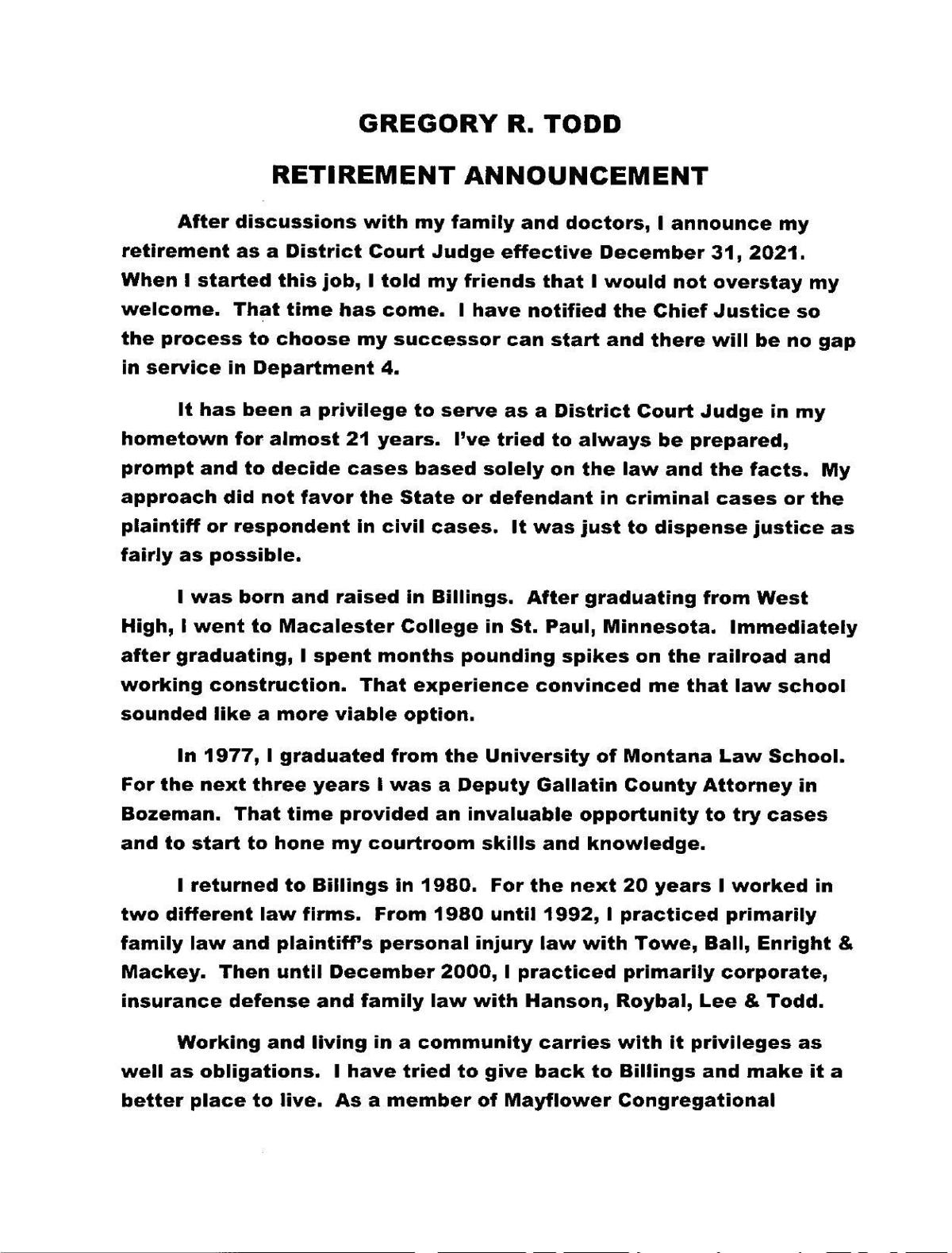 While on the bench Todd has ruled over the Family Recovery Treatment Court, which serves parents whose children have been removed due to substance abuse issues.

“That opportunity opened my eyes to a whole new approach to judicial problem solving and assistance,” he wrote about serving in the recovery court. “In my job, learning never stops. Although it has been the hardest part of my career, it has also been the most rewarding.”

He has also served as president of the Montana Judges Association over the last few years. That time included a battle between the judiciary and the legislature over access to judiciary records. That battle stemmed in part from a poll requested by Todd and the association seeking input from judges on SB140, which allowed the governor to appoint judges without the oversight of a review board.

“Many institutions in Montana and across the country are being seriously challenged,” Todd wrote. “A prime target is the judiciary. It is my hope and prayer that all citizens understand the ramifications of these attacks … the viability of our judicial system may be seriously wounded or even irreparably harmed.”

Judges Rod Souza and Gregory Todd, who both filed in January, had no opponents for their seats when candidate filing closed Monday at 5 p.m.

Yellowstone County District Judge Gregory Todd is objecting to Judge Ashley Harada being censured for misconduct, saying she should instead be suspended.