Zinke, Juneau spar in Billings debate
Share this
1 of 6 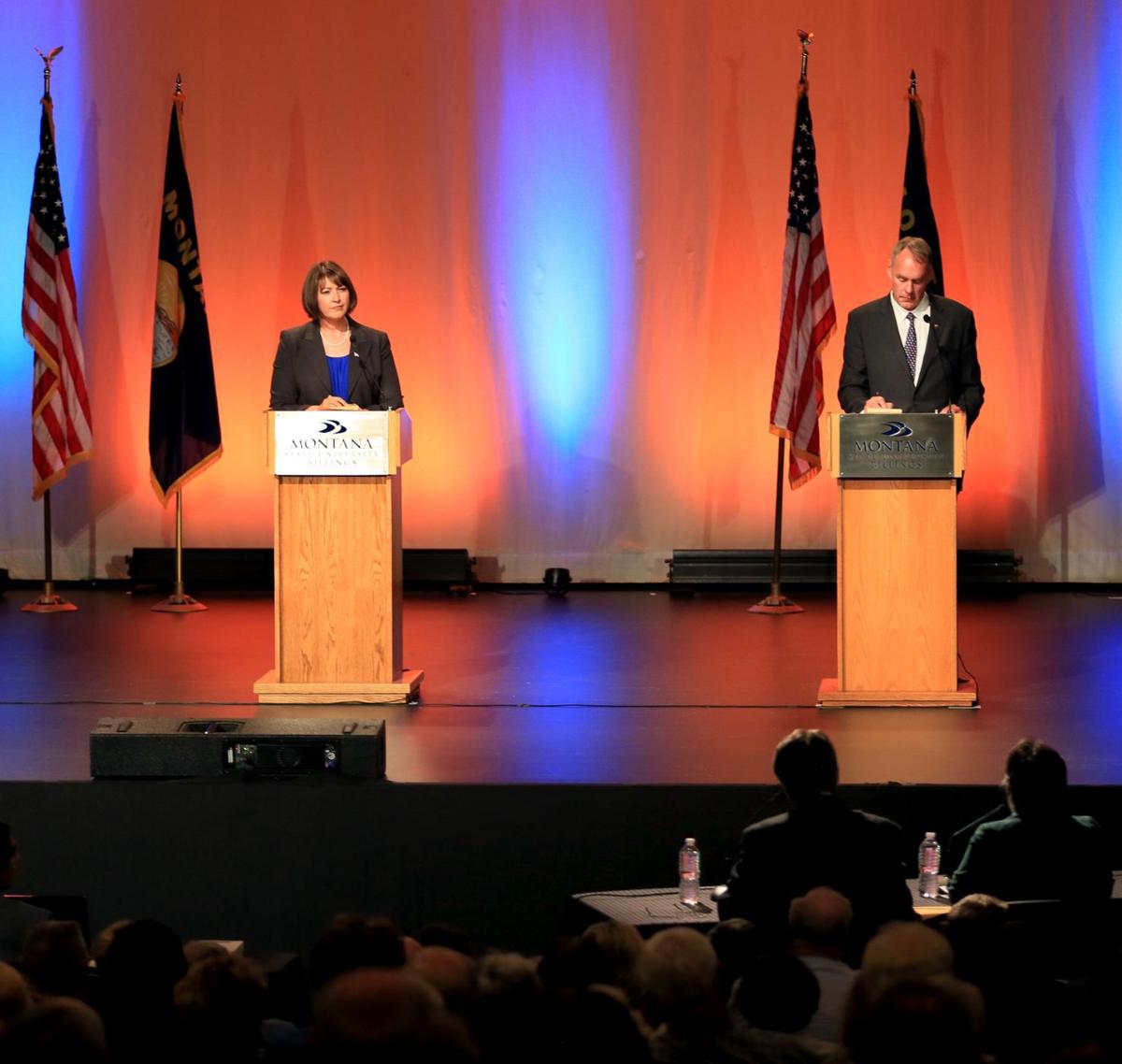 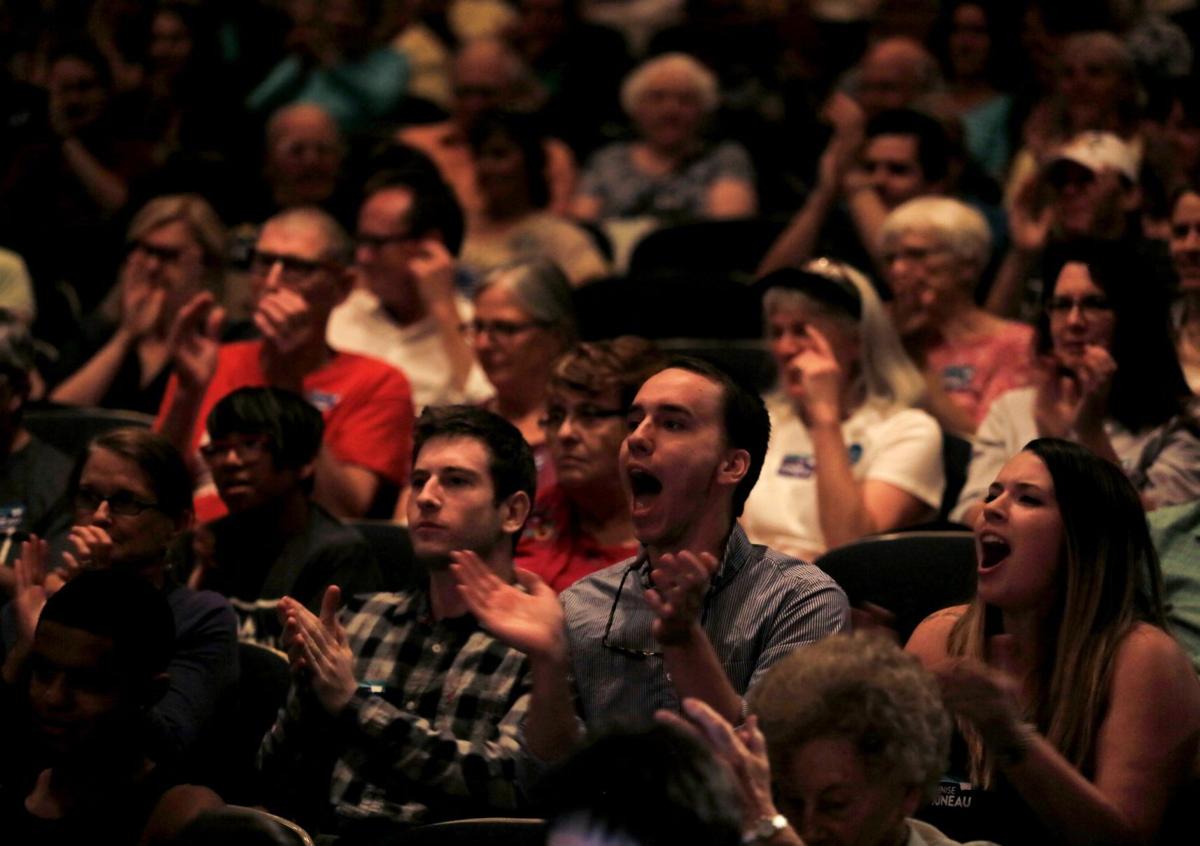 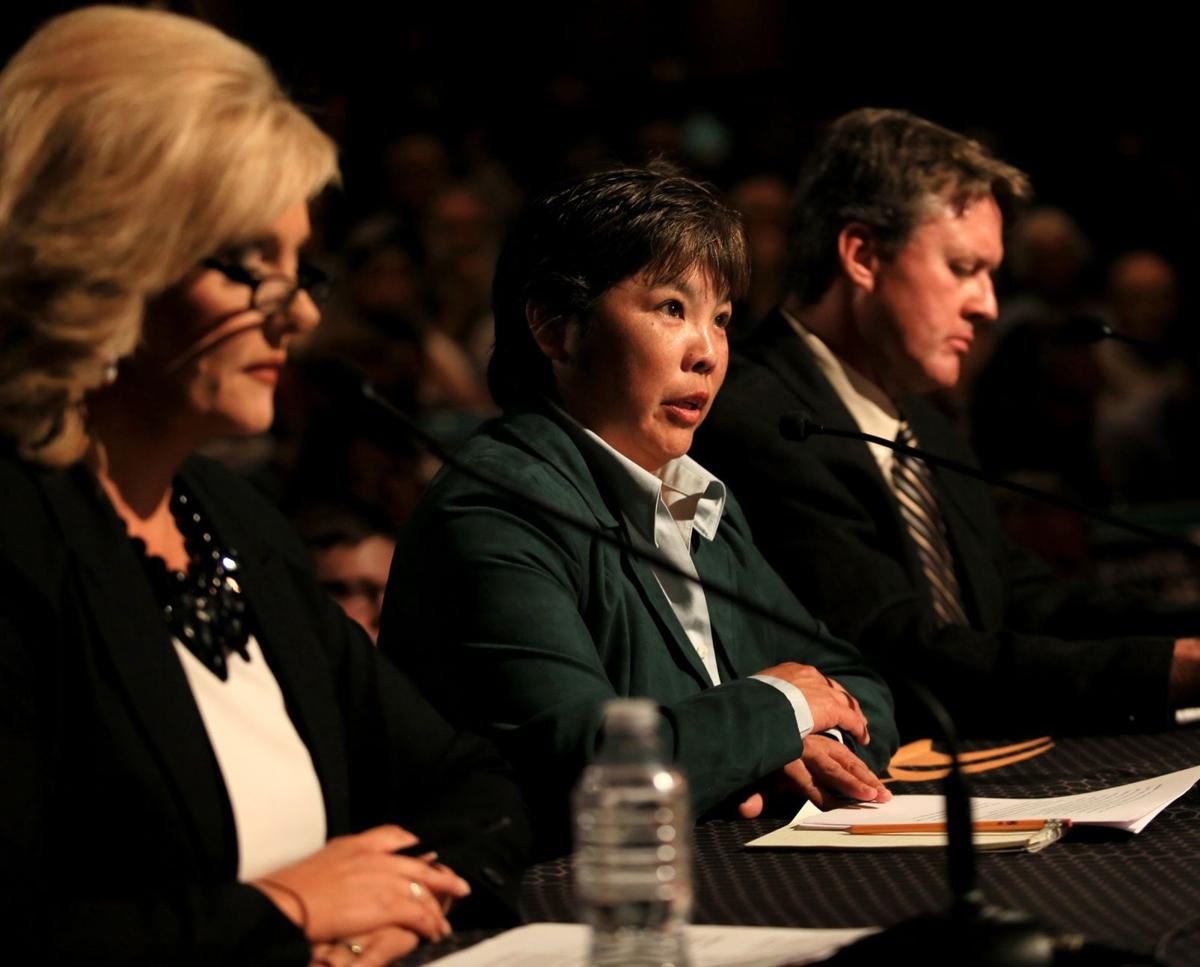 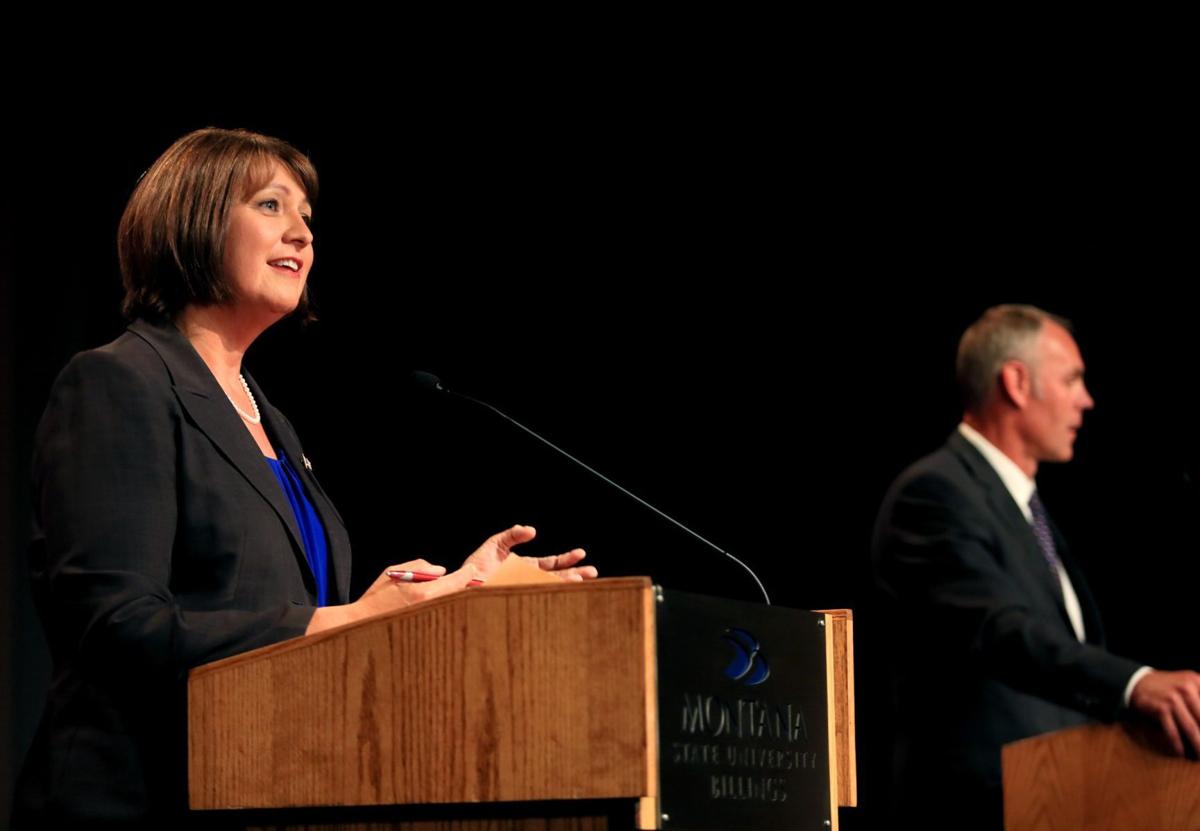 Democrat Denise Juneau speaks about her involvement with the Land Board during a U.S. House debate in Petro Hall at MSUB on Thursday. 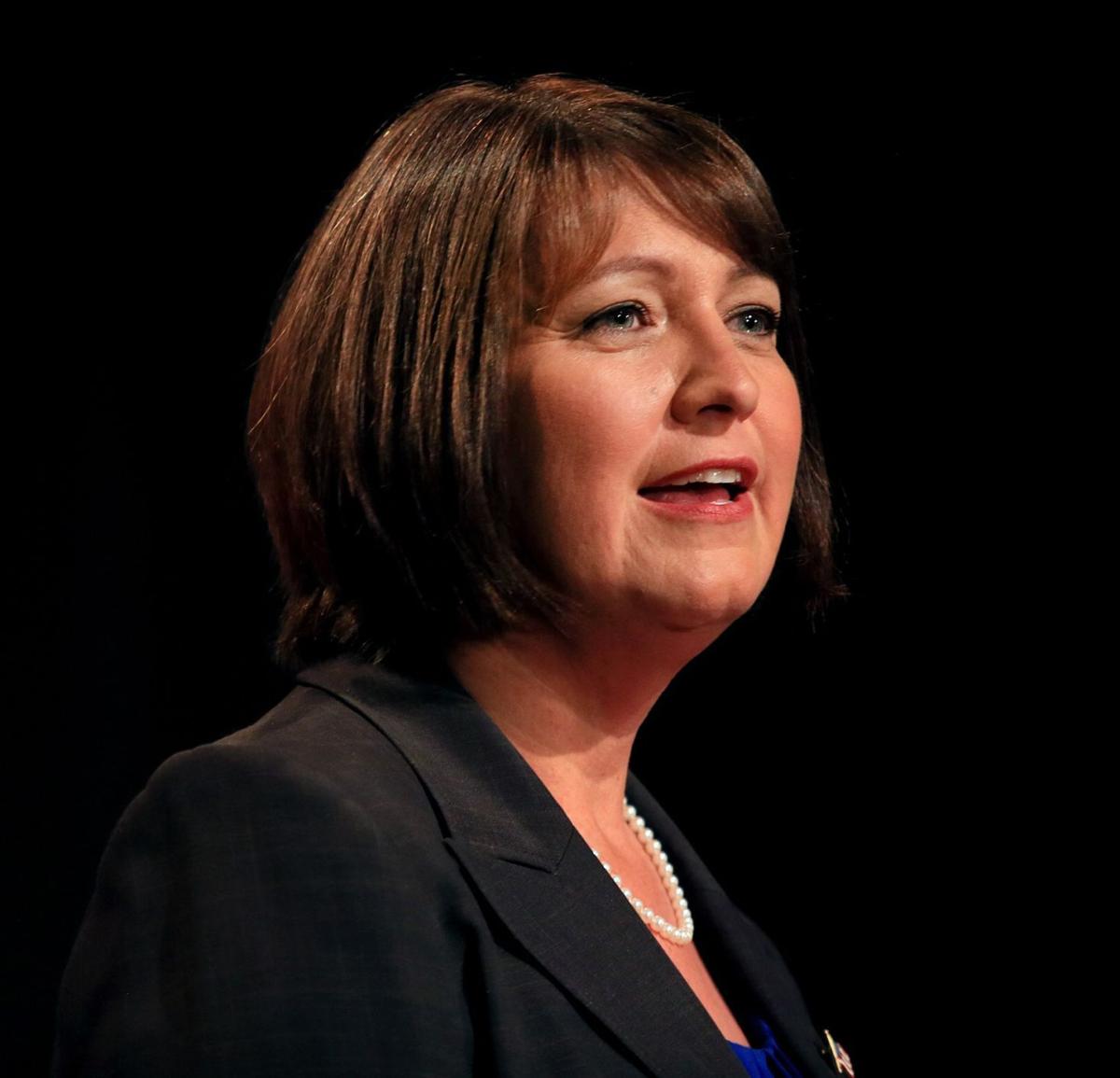 Democrat Denise Juneau discusses her support for tribes and communities during a U.S. House debate in Petro Hall at MSUB on Thursday. 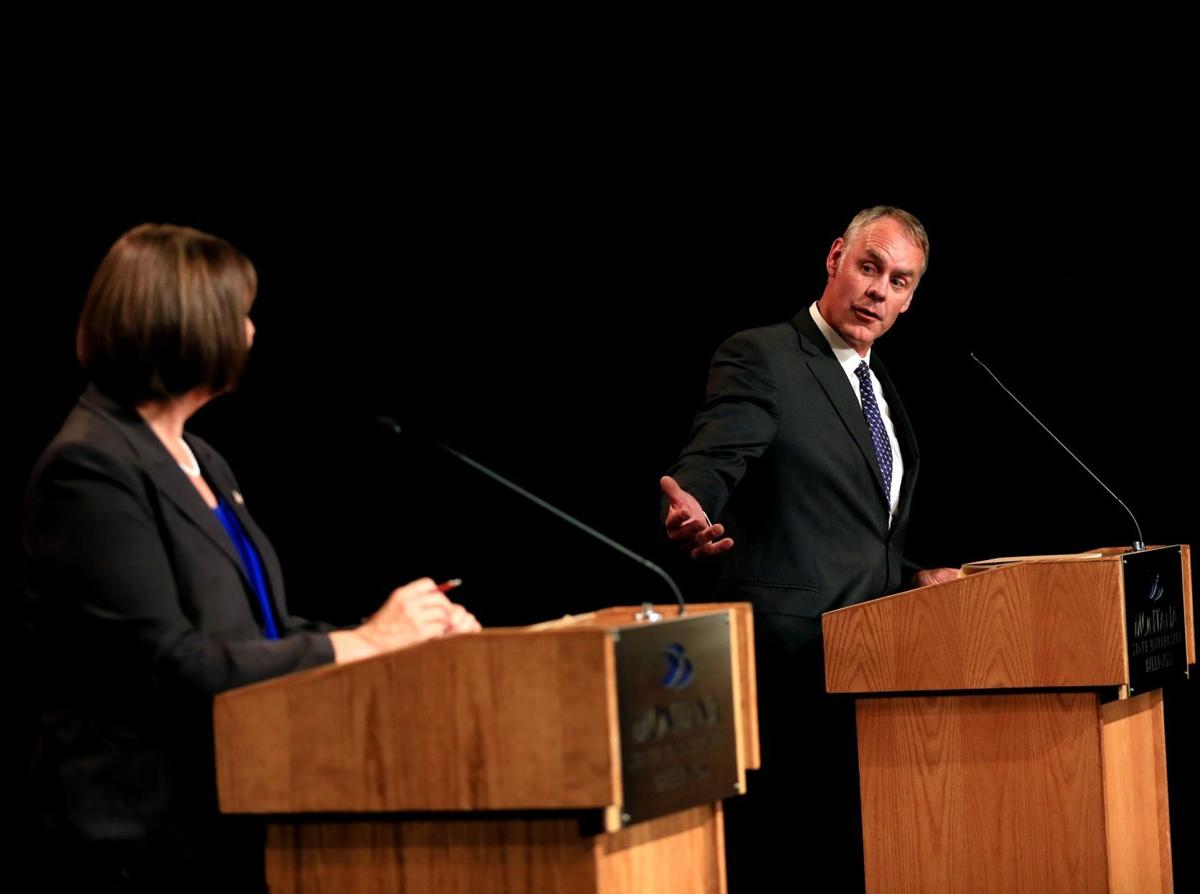 Republican U.S. Rep. Ryan Zinke requests an apology from Democrat Denise Juneau after an accusation about a super PAC during a U.S. House debate in Petro Hall at MSUB on Thursday, September 1, 2016.

U.S. Rep. Ryan Zinke and Superintendent Denise Juneau made fewer mentions of their party’s presidential candidates in their second debate Thursday night and instead reserved their critiques for each other as they played to a rambunctious crowd.

The debate between candidates for the state's sole U.S. House seat at Petro Theater on the MSU-Billings campus drew a near-capacity crowd of about 400. Campaign organizers divided the seats by placing yard signs in each: Juneau supporters to stage right and Zinke supporters to stage left. Throughout the debate, each half tried to cheer and boo over the other, particularly as the candidates ignored event rules to make rebuttals. At one point, the debate moderator directed the candidates to focus on the questions being asked and to not “hijack” the debate.

Libertarian candidate Mike Fellows was unable to make the event on short notice due to personal illness.

Repeating some themes from the first debate Monday night in Frazer, Juneau sought to cast Zinke as more interested in his career than Montana.

“I’m proud of the record in my tenure as Superintendent (of Public Instruction),” she said. “In Congressman Zinke, you have someone who has not done the job for Montana. You have someone more interested in getting on the 24-hour news.”

Zinke defended himself, noting that while he might not agree with all his constituents he will listen and give their thoughts fair consideration.

“I represent all Montana,” he said. “For a reason. I have a plaque on my door that says my office belongs to the citizens of Montana. I tell you my office and my vote is not mine, it’s yours."

Several moderator questions focused on natural resource development and land management, from coal and Colstrip to the Keystone Pipeline and forest management. Other questions covered campaign finance transparency, relations with Russia and Iran, the resettlement of Syrian refugees, the Land and Water Conservation Fund, and how to reform the VA.

An early question to Juneau asked if she supports coal mining on the Crow Reservation and focused on a $1,950 donation from the Lummi Nation in Washington state. In denying a permit for the Gateway Pacific Terminal on the Washington coast, the U.S. Army Corps of Engineers cited the Lummis' treaty rights to fish the shore where the terminal would have been located. The port could have received coal mined on the Crow Reservation.

Juneau responded by saying she “stands on the side of Crow coal” and that she’d met with Crow Tribal Chairman Darrin Old Coyote earlier Thursday. Zinke called the donation “blood money” and noted that Juneau had voted against the Otter Creek coal development in 2010 as a member of the state Land Board.

In a question about whether that vote would indicate her future opinions on coal leases, she said the lease was not in the best long-term interest of the state. The board voted 3-2 to lease the tracts to Arch Coal. The project died when Arch Coal declared bankruptcy this year.

“I spoke with landowners in the area who were opposed to it,” she said. “The tribe (Northern Cheyenne) was opposed to it.” She pointed out later votes she called pro-coal, including a vote to expand the Signal Peak coal mine in 2014.

“I’ve taken votes on the state Land Board that are pro-coal, pro-oil, pro all-of-the-above. And I stand by that record.”

Zinke used the question as an opportunity again bring up money donated from the Lummi and called on Juneau to return it.

“If she’s so pro-coal, I’d ask that she give the money back,” Zinke said, leaning over the lectern.

Juneau fired back by suggesting Zinke did not have Montana’s interests at heart. She noted that 80 percent of contributions to his campaign have come from out of state and that it is impossible to tell which special interests donated because their money is funneled through one of two political action committees that support of him.

“First of all Miss Juneau,” Zinke said, looking at her sideways. “I take offense that you say special interests are lining my pocket. I did not take a donation from the Lummi tribe.”

He defended his record of support for tribal nations, saying “sovereignty should mean something,” before asking for an apology and calling for civility. He said the out-of-state contributions to his campaign came from “thousands of low-dollar donors that believe in the same things we do” and said they were a necessity to have a big enough voice as the state’s lone congressman.

In the final question of the night, the candidates were asked if they supported the Keystone XL pipeline, denied by the Obama administration in 2015, which would have run through the northeastern corner of the state.

Juneau again cited her record on the land board, saying she voted for an on-ramp that would been built if the project went forward. She added oil companies need to be held accountable for safety and spills.

“We know what happens when pipelines leak,” she told a crowd familiar with pipeline spills in the Yellowstone River in 2011 and 2015.

“Let me show you a little leadership. The answer is yes,” he said. “The Keystone pipeline was the most greatest, smartest engineered product in the history of the nation. It was safe. Even the EPA said it was safe.”

Colstrip, which lies east of Billings, played a large role in the night’s questions. A moderator asked why not leave the future of the coal-fired power plant in the hands of the market, namely low natural gas prices that make it cheaper to produce electricity in natural gas-fired plants.

Zinke said federal over-regulation is more harmful to Colstrip than market forces. He said the loss of Colstrip would bring up the cost of electricity to major manufacturers in Montana, including the refinery in Billings. “Colstrip is the heartbeat of it.”

Juneau was more acknowledging of outside factors determining the future of Colstrip, saying she would focus on providing leadership to help the town and those who lose jobs find a way forward.

In general, Zinke sought to cast Juneau as a liar and to highlight his conservatism. Juneau often took pragmatic ground on some questions and did not provide much detail on others.

This was clear, for instance, when the candidates were asked how they would handle increased tensions with Russia and the country’s growing ties with Iran.

Zinke generally criticized the president for not taking strong stances on diplomacy matters. He went on to detail the complications of having Russia in the same airspace as America while they had competing goals for the region and said he had serious concerns about Iran’s intentions with regard to Israel.

Juneau did not mention Russia, Iran or any country in her response.

“When looking at any of these issues, American safety has to come first,” she said. “Sometimes we have to work with people we don’t like to get the job done.”

In a similar question to what the candidates fielded Monday night, a moderator asked if the candidates felt an accelerated screening process for Syrian refugees left America open to security threats.

“We need to put American safety first and foremost, but we need to remember we have a moral center as Americans,” Juneau said, using the question to criticize an amendment Zinke sponsored in 2015 to defund the Department of Homeland Security.

Zinke referenced an amendment he co-sponsored that would have prevented money from being used to carry out any executive actions that would have granted amnesty to immigrants in the country illegally. He also said women and children can be a threat and carry out terrorist attacks and that the country needs a better vetting process.

Zinke was asked to clarify how he would reform the Land and Water Conservation Fund, a federal program that gives grants to states and tribes to buy public parks

Zinke said three changes are needed -- a broader revenue source, a streamlined process and ways to incentivize collaboration between local, state and federal governments. The current funding -- which comes from fees paid by offshore drilling companies -- is too risky, he said.

Juneau suggested that the program was not necessarily broken, just underfunded and that it needed long term authorization rather than constant uncertainty. “The money’s there,” she said. “What we need is leadership.”

On questions about the Veterans Administration, Zinke highlighted his expertise while taking a swing at the too-big bureaucracy that he said ballooned under President Barack Obama’s leadership.

“To improve (the Choice Act), we’ve got to push more authority to the state in Helena,” he said. “Let them make the decision rather than some bureaucrat in Washington, DC.”

Juneau, as she did Monday, said “the Veterans First Act is a good start,” highlighting that it made funding more flexible. Zinke has said he opposes the bill.

Zinke also was asked about statements he made in Billings telling veterans they should work toward getting jobs and calling reliance on government services "economic slavery."

“We have to wean them off the dangerous cycle of economic dependency on the government,” Zinke said. “Don’t be a victim. Be a value-added part of society.”

Juneau said the government needs to keep promises it makes to veterans on providing support in terms of job training, housing and health care after their service is over.

“When they are out there doing their job and they come home, we need to fulfill their obligations,” she said.

The next debate between Zinke and Juneau is set for Oct. 5 at Heritage Hall at Great Falls College Montana State University. The candidates squared off for the first time in Frazer on Monday. The candidates said previously they would like to hold a debate on the Crow Reservation but a date has not been set.

Images from a U.S. House debate between Democrat Denise Juneau and Republican U.S. Rep. Ryan Zinke in Petro Hall at MSUB on Thursday.

HELENA — U.S. Rep. Ryan Zinke has wrongly stated in two debates this week that 80 percent of terrorist attacks in a central African conflict a…

There was a certain irony at the Sept. 1 debate for Montana’s sole seat in the U.S. House.

Democrat Denise Juneau speaks about her involvement with the Land Board during a U.S. House debate in Petro Hall at MSUB on Thursday.

Democrat Denise Juneau discusses her support for tribes and communities during a U.S. House debate in Petro Hall at MSUB on Thursday.

Republican U.S. Rep. Ryan Zinke requests an apology from Democrat Denise Juneau after an accusation about a super PAC during a U.S. House debate in Petro Hall at MSUB on Thursday, September 1, 2016. 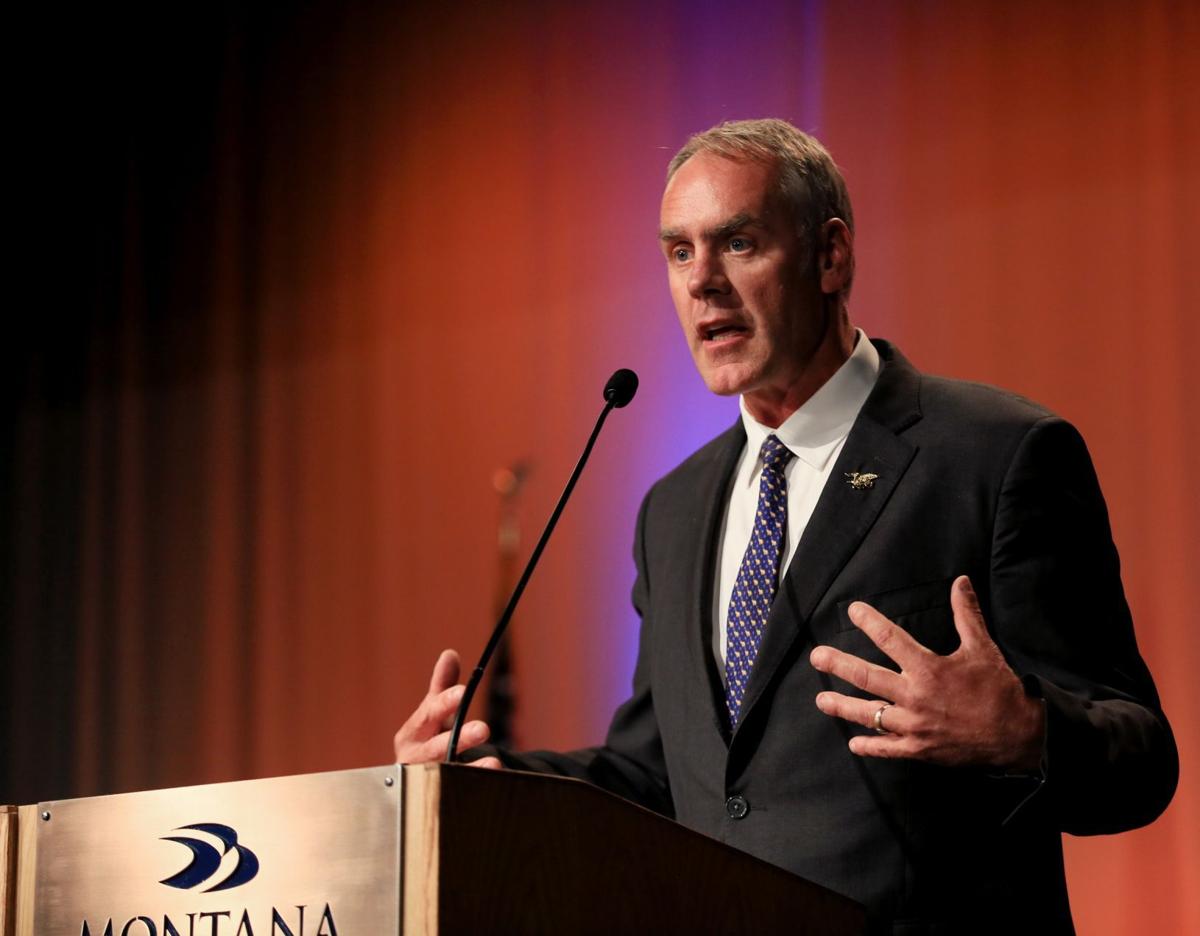