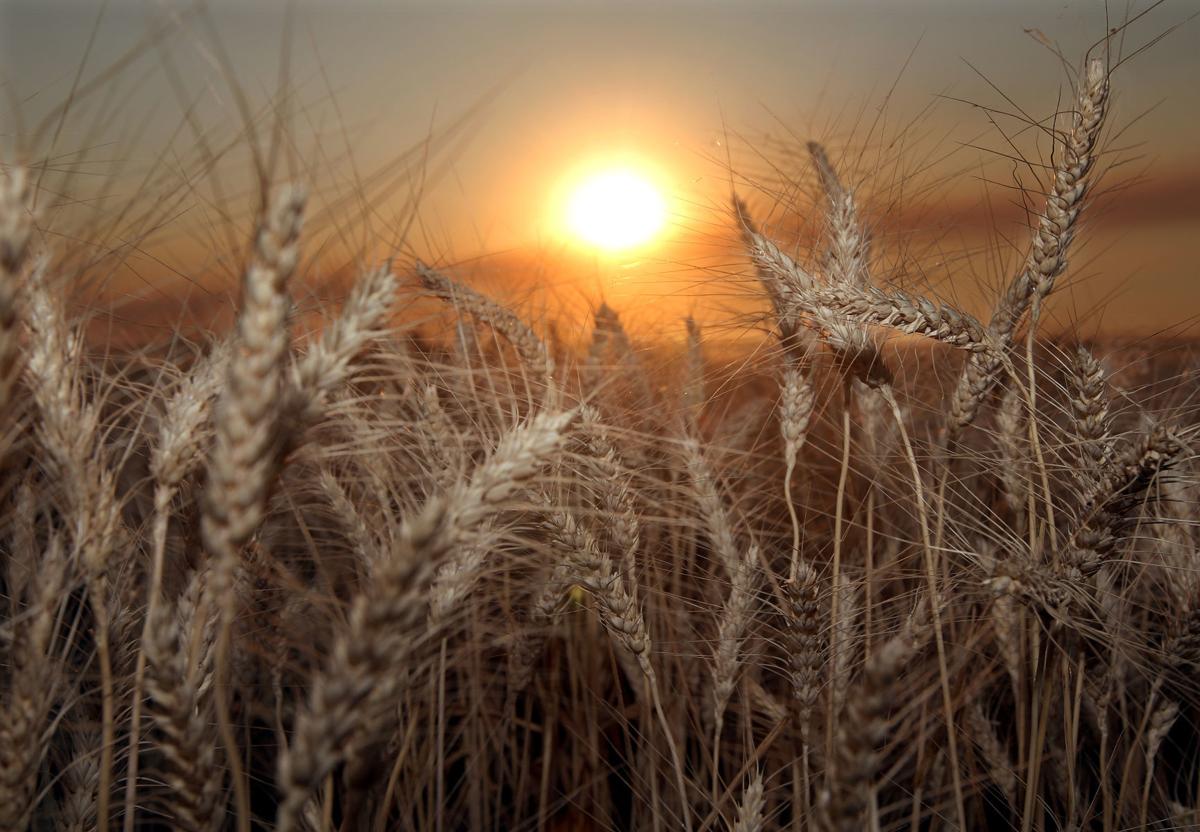 Winter wheat is ready for harvest as the sun sets on Nessan Farms near St. Xavier. Recent import and export tariffs announced by the U.S. and China have Montana farmers worried that President Trump's "trade war" could wreak havoc with commodity prices. 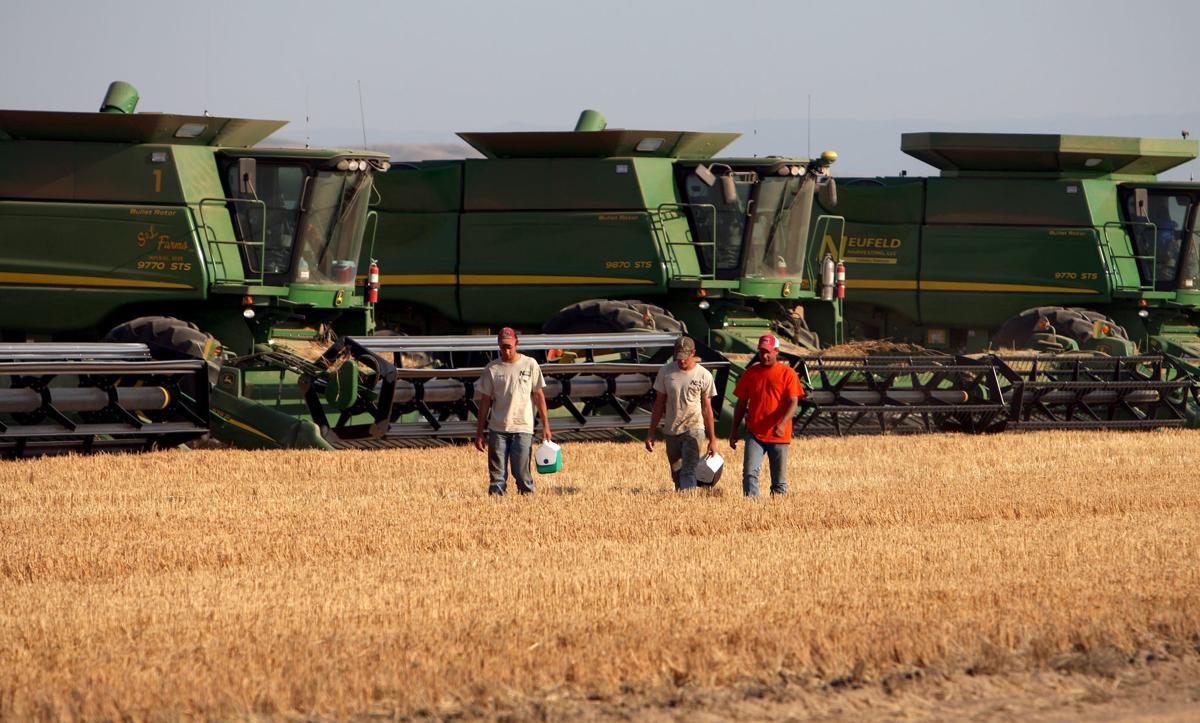 Combine drivers from Neufeld Harvesting and S&L Farms walk across a field of wheat stubble at Nessan Farms near St. Xavier in 2008. Recent import and export tariffs announced by the U.S. and China have Montana farmers worried that President Trump's "trade war" could wreak havoc with commodity prices.

Montana farmers are worried about becoming a casualty of President Donald Trump’s trade war with China.

First, tariffs will increase the price Chinese buyers pay for Montana wheat, observers said. Second, U.S. prices are likely to dip as corn and soybeans take a hit. Prices for the three commodities are closely linked.

“Ag is the United States' number one export. So, what’s China going to do? They’re going to retaliate against our number one export,” said Gordon Stoner, Montana farmer and past president of the National Association of Wheat Growers.

In 2017, China bought $19.6 billion worth of U.S. farm products, according to U.S. Department of Agriculture Foreign Agricultural Service. Sales to China have increased 136 percent over 10 years. Soybeans are the big ticket item at $14 billion in sales. Corn sales were about $160 million. Wheat sales were $391 million.

Just last year, China lifted a 14-year ban on U.S. beef. Sales are just beginning to take off, amounting to 1 percent of Chinese imports and $30 million in sales last year.

Stoner, who farms in the far northeast corner of the state near Outlook, was spraying fields Friday and hoping for a little rain. He raises wheat, peas and lentils, all of which are exported. The grain ships to Asian Pacific buyers, while the pulse crops go to India.

In Stoner’s corner of Montana, farmers raise durum and hard red spring wheat varieties. The latter is a big seller in China.

China buys about $26 million worth of hard red spring wheat shipped from U.S. Pacific Northwest ports. Half of that grain comes from Montana, the other half from North Dakota, according U.S. Wheat Associates, which markets American wheat. Sales to China are an eight-figure contribution to Montana’s annual wheat sales, which for several years have averaged about $1 billion.

“They’ve been a fairly significant buyer of spring wheat the last two years. So, that would be a problem for wheat growers,” said Collin Watters, Montana Wheat and Barley Committee bureau chief.

Watters sees a China trade war causing problems in several different ways, lost sales being the first. Indirectly, wheat is likely to see a price drop as U.S. soybeans raised with China in mind have to find a new buyer.

The soybeans are used for animal feed. If that feed commodity is stranded at home, it will decline in price, while also dragging down the value of other sources of animal feed like corn and wheat.

If feed wheat prices decline, then so do prices for the higher quality wheat varieties used for making for bread and pasta. It’s the high quality market that’s a Montana specialty.

Looking into the future, Watters is concerned about a day when trade war-suppressed prices for soybeans and corn might compel farmers of those crops to begin planting wheat instead. If that happens, the increased grain supply would likely drive wheat prices down further.

Ranchers could lose potential sales in a trade war with China, but there aren't many actual sales to be undone, Smith said. Montana ranchers, for example, have been working toward a $200 million beef sale to an online Chinese grocer, but the sale hasn't been realized.

A bigger threat in the long term would be a continued ratcheting up of U.S tariffs against foreign goods, Smith said, which hurt manufacturers who rely on imported materials, while provoking retaliatory tariffs against U.S. products.

There are other challenges on the horizon for agriculture, namely from the uncertainty of Trump’s renegotiation of the North American Free Trade Agreement and the fallout from the United States exiting the 11-nation Trans Pacific Partnership.

In NAFTA, U.S. wheat has a reliable wheat buyer in Mexico. In TPP, Japan is poised to offer more favorable terms to wheat growing nations than the United States currently has.

The government announced a $12 billion plan Tuesday to assist farmers who have been hurt by President Donald Trump's trade disputes with China and other trading partners.

Vice President Mike Pence roused a crowd of 400 people to vote Matt Rosendale into the U.S. Senate and stay the course with Donald Trump durin…

Montana’s pea and lentil farmers have been all but shut out of India by tariffs of up to 60 percent. The state leads the nation in pulse crops, producing more than 700,000 tons of peas and lentils annually.

Former U.S. Sen. Max Baucus is lending a hand in getting Congressional approval for a new free trade agreement with Canada and Mexico.

Winter wheat is ready for harvest as the sun sets on Nessan Farms near St. Xavier. Recent import and export tariffs announced by the U.S. and China have Montana farmers worried that President Trump's "trade war" could wreak havoc with commodity prices.

Combine drivers from Neufeld Harvesting and S&L Farms walk across a field of wheat stubble at Nessan Farms near St. Xavier in 2008. Recent import and export tariffs announced by the U.S. and China have Montana farmers worried that President Trump's "trade war" could wreak havoc with commodity prices.