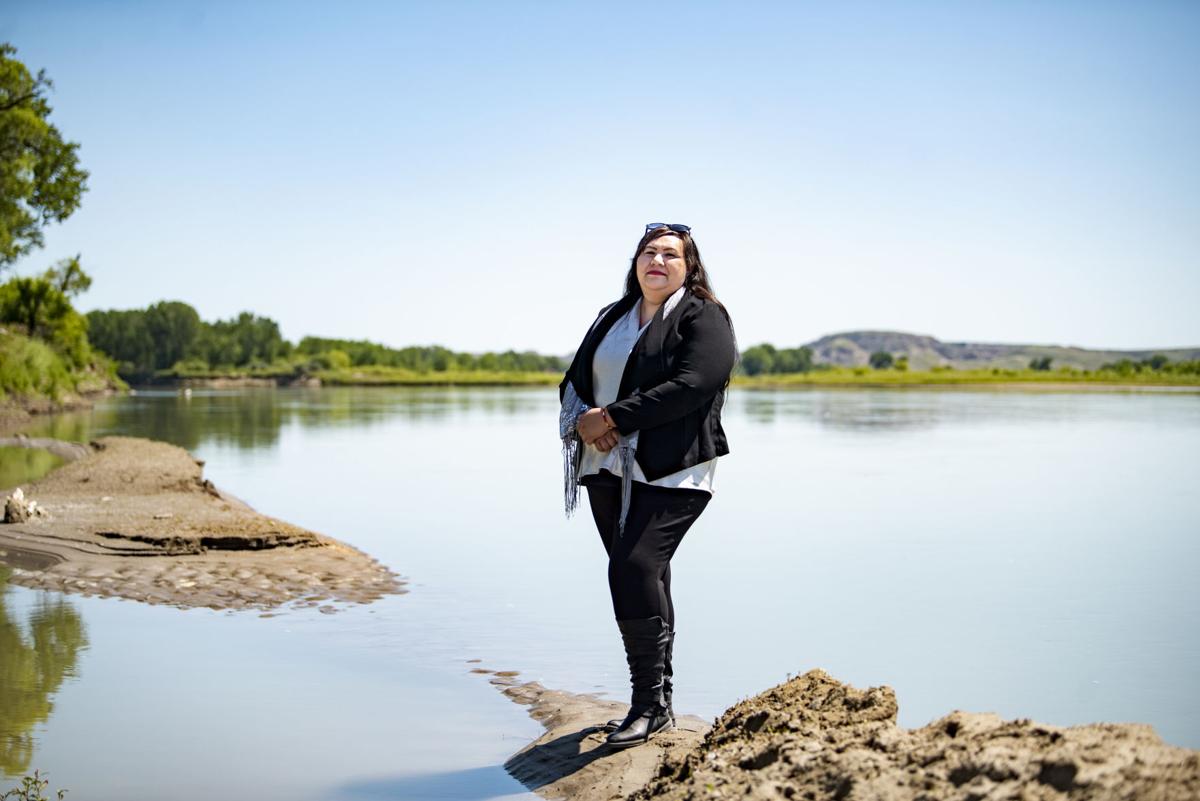 Angeline Cheek of the Montana ACLU stands on the bank of the Missouri River at the New Bridge Fishing Area south of Brockton, Montana, on Thursday. Cheek is concerned about the potential environmental impacts the Dakota Access Pipeline may have on natural resources such as rivers. 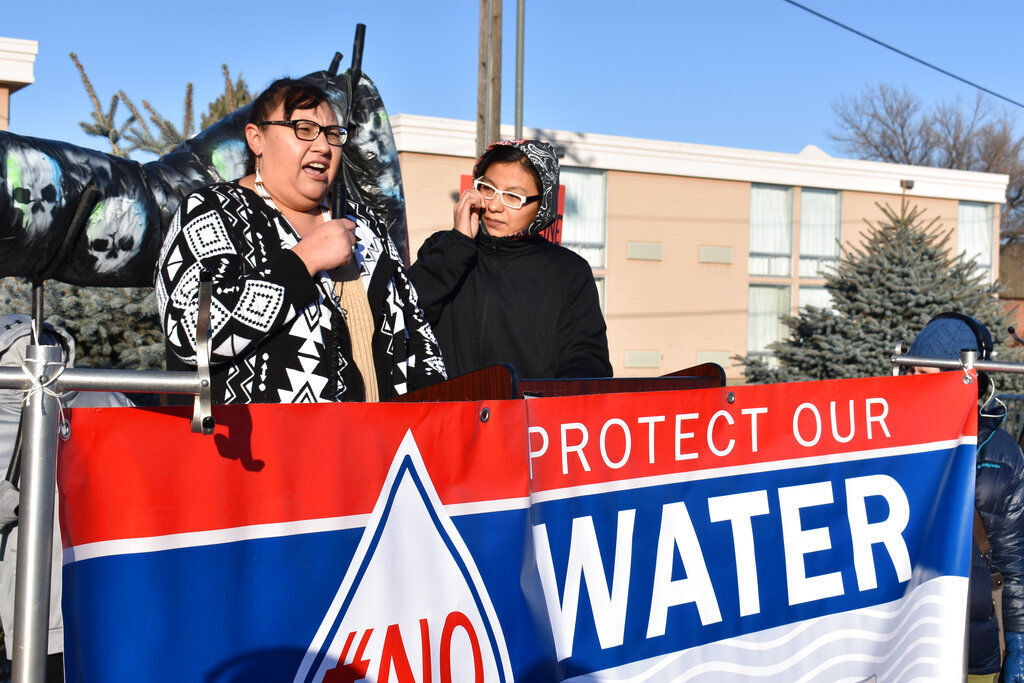 In this Oct. 29, 2019, file photo, Angeline Cheek, left, a community organizer from the Fort Peck Indian Reservation, speaks about the potential environmental damage from the Keystone XL oil pipeline from Canada during a demonstration in Billings.

It’s an hour-long drive to the Keystone XL pipeline construction site from Angeline Cheek’s home in Brockton, Montana. The vastness of the northeast Montana landscape unfolds without interruption all the way to the horizon.

Protesting here is no march down Main Street, no rally on the courthouse lawn. A scream into a megaphone can be swallowed by wind without even pricking up the ears of a jackrabbit.

So it was this spring when Cheek, a Hunkpapa Lakota and Oglala Sioux, led a caravan of Fort Peck Assiniboine Sioux north almost to the U.S.-Canada border for a prayer ceremony against Keystone XL’s progress. They passed private security guards parked at turns along the gravel road to the route, before encountering U.S. Customs and Border Protection Agents and pipeline developer TC Energy’s “tribal liaison officer,” a Fort Peck Reservation resident named Eric.

“I told everybody, ‘you guys all count coup on Eric.’ So, we all did. We just laughed at him because he’s a traitor, basically,” Cheek said. The group of eight to 10 protesters were mostly elderly Indigenous women. “To count coup, you touch the enemy. He didn’t take it too lightly, but we did it anyway.”

The Keystone XL pipeline route skirts the western edge of Fort Peck Reservation, but that hasn’t put the pipeline beyond the reach of concerned Assiniboine and Sioux tribal members, who have treaty rights extending beyond the 110-mile long, 40-mile-wide reservation established in 1888.

Montana has the longest pipeline segment of any state along Keystone XL's 1,200-mile route from Alberta to Gulf Coast refineries. The pipeline is intended to transport up to 830,000 barrels of crude daily.

The circumstances for indigenous pipeline opponents along Montana’s Hi-Line are similar to those of the Standing Rock Sioux Tribe in its 2016 objection to the construction of Dakota Access Pipeline. In both cases, the pipelines avoid tribal land, but intersect with the tribes’ drinking water source. There are concerns about culturally important sites and whether the tribes were adequately consulted. Treaty rights pertaining to the Assiniboine and Sioux tribes’ cultural relationship with the Missouri River, as well as a guarantee to Missouri River water supporting the reservation are key concerns in a Fort Peck lawsuit against the federal government. 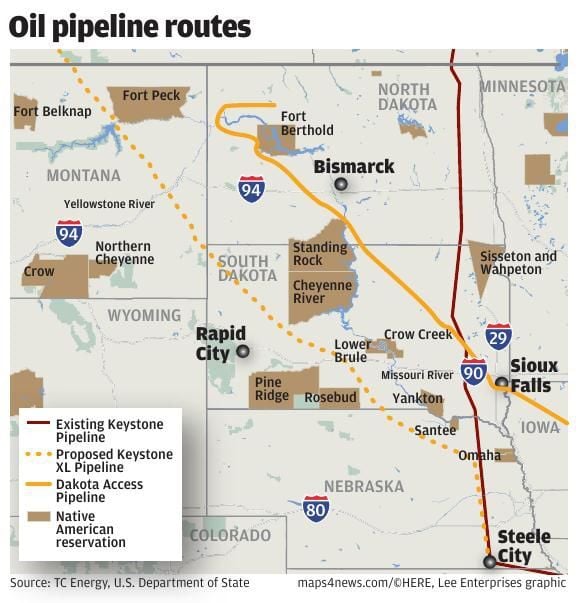 Standing Rock erupted into a months-long protest, as construction began and conflicts arose between the protesters and private security guards. Eventually, North Dakota responded by deploying the National Guard, complete with military vehicles to back up law enforcement. The experience raised concerns in Montana that federal and state governments were preparing for a combative response to Indigenous protesters, rather than protecting tribal members’ civil right to protest peacefully.

When the state of Montana and the federal government refused to disclose what their preparations were, the ACLU Montana sued. Cheek is the ACLU Montana person on the ground at Fort Peck Reservation. The lawsuits revealed Montana is training its Fish Wildlife and Parks game wardens to police protests if called upon. In an April 30, 2018 email, FWP officials state that “although man-camps bring a certain degree of law enforcement challenges, the primary enforcement focus is protest activity.”

Also, documents obtained through a lawsuit against the federal government revealed training seminars in Montana to prepare for protests. Federal agencies had argued their discussions didn't constitute a plan against protests, but the court disagreed. The lawsuit against Montana's government is ongoing.

The emphasis on protest over man camps struck a nerve with Cheek, given the crisis of missing and murdered Indigenous people and sexual assault, something Fort Peck tribal members worry the man camps will make worse. Peaceful protests, on the other hand, are a First Amendment right.

“DAPL has influenced KXL because all our Indigenous people are tired of continuous injustices, broken treaties, poor health care, hate crimes, inadequate funding, broken education system, broken housing systems, and oppression,” Cheek said in an email last week. “All Indigenous people from all tribes are experiencing these same issues because water is one of the last resources that we have to depend on for future generations of our people.”

Good drinking water is hard to come by here. The hard water from most wells in this country will ruin a dishwasher in a couple years. The ground water minerals aren’t very good for people, ether.

There is a water compact between the federal government, the state and the tribes granting the Assiniboine and Sioux one million acre feet of diversions annually. And defending the quality of that water, making sure the federal government honors its treaty agreements, has become an important part of the protest said Bill Whitehead, chairman of the Assiniboine & Sioux Rural Water Supply System.

A life-long community organizer, Whitehead participates in both the Indigenous response to Keystone XL and the environmental movement which includes groups like the Northern Plains Resource Council.

Montana has had two significant oil pipeline ruptures beneath the Yellowstone River in the last decade, Whitehead pointed out. In both cases, the pipelines were assumed to be safely buried. The tribe takes no comfort in Keystone being buried deeper than previous pipelines.

“Just so much responsibility we have, it’s not just a matter of working for water. We’re working for the survival of not only Fort Peck, but all tribal nations, 500 and some tribes,” Whitehead said. “We always have to understand when we take actions how we affect other tribes.”

A man stands among veterans

The Billings Gazette and other Lee Enterprises newspapers in Montana and North Dakota teamed up to examine the implications of recent court rulings on major oil pipelines. This is the final installment in a three-part series.

A Canadian company has built the first piece of the disputed Keystone XL oil sands pipeline across the U.S. border and started work on labor camps in Montana and South Dakota.

Civil liberties advocates are taking Montana officials to court to force the public release of documents detailing the government's planned response to anticipated protests against the Keystone XL oil pipeline.

BISMARCK, N.D. — Attorneys for oil pipeline opponents are fighting a South Dakota sheriff's attempt to be dismissed as a defendant in a lawsui…

BISMARCK, N.D. — North Dakota's Republican-led Legislature on Monday increased the legal penalties for people who tamper with pipelines and gr…

There have been five Colorado tick fever cases reported in Wyoming so far in 2020, four of which are in Sublette County. Typically, the state reports two cases a year, if that many.

It's like sitting "on pins and needles" watching the legal drama unfold over the shutdown of the Dakota Access Pipeline, says former Standing Rock Chairman Dave Archambault.

The state of North Dakota at a court hearing Tuesday continued its effort to recoup $38 million in expenses it incurred policing the Dakota Access Pipeline protests.

The Northern Cheyenne People’s Camp has transitioned from staffing an emergency response to the outbreak of COVID-19 to providing law enforcement on the reservation.

What happened to 2M doses of hydroxychloroquine US sent Brazil

What happened to 2M doses of hydroxychloroquine US sent Brazil

Angeline Cheek of the Montana ACLU stands on the bank of the Missouri River at the New Bridge Fishing Area south of Brockton, Montana, on Thursday. Cheek is concerned about the potential environmental impacts the Dakota Access Pipeline may have on natural resources such as rivers.

In this Oct. 29, 2019, file photo, Angeline Cheek, left, a community organizer from the Fort Peck Indian Reservation, speaks about the potential environmental damage from the Keystone XL oil pipeline from Canada during a demonstration in Billings. 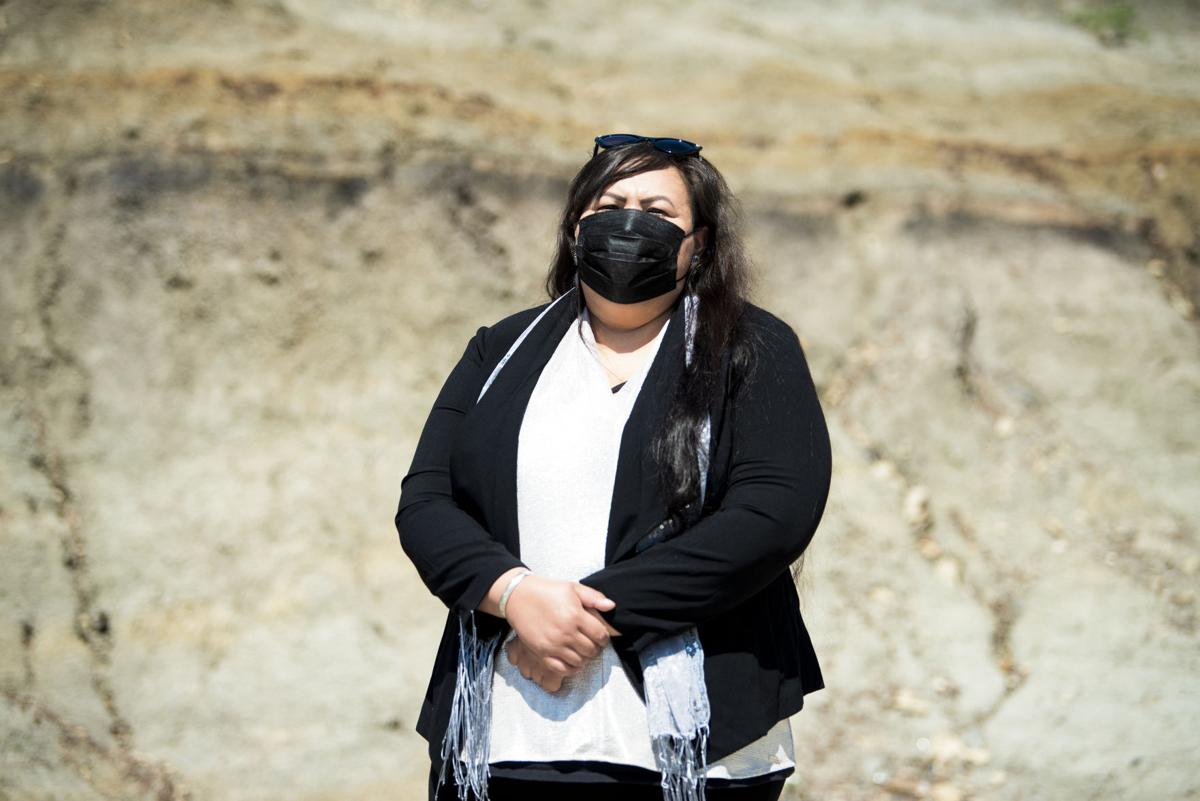 Angeline Cheek of the Montana ACLU stands in the badlands north of Brockton, Mont. on Thursday. Cheek is concerned about the potential environmental impacts of the Dakota Access Pipeline as well as the spread of COVID-19.