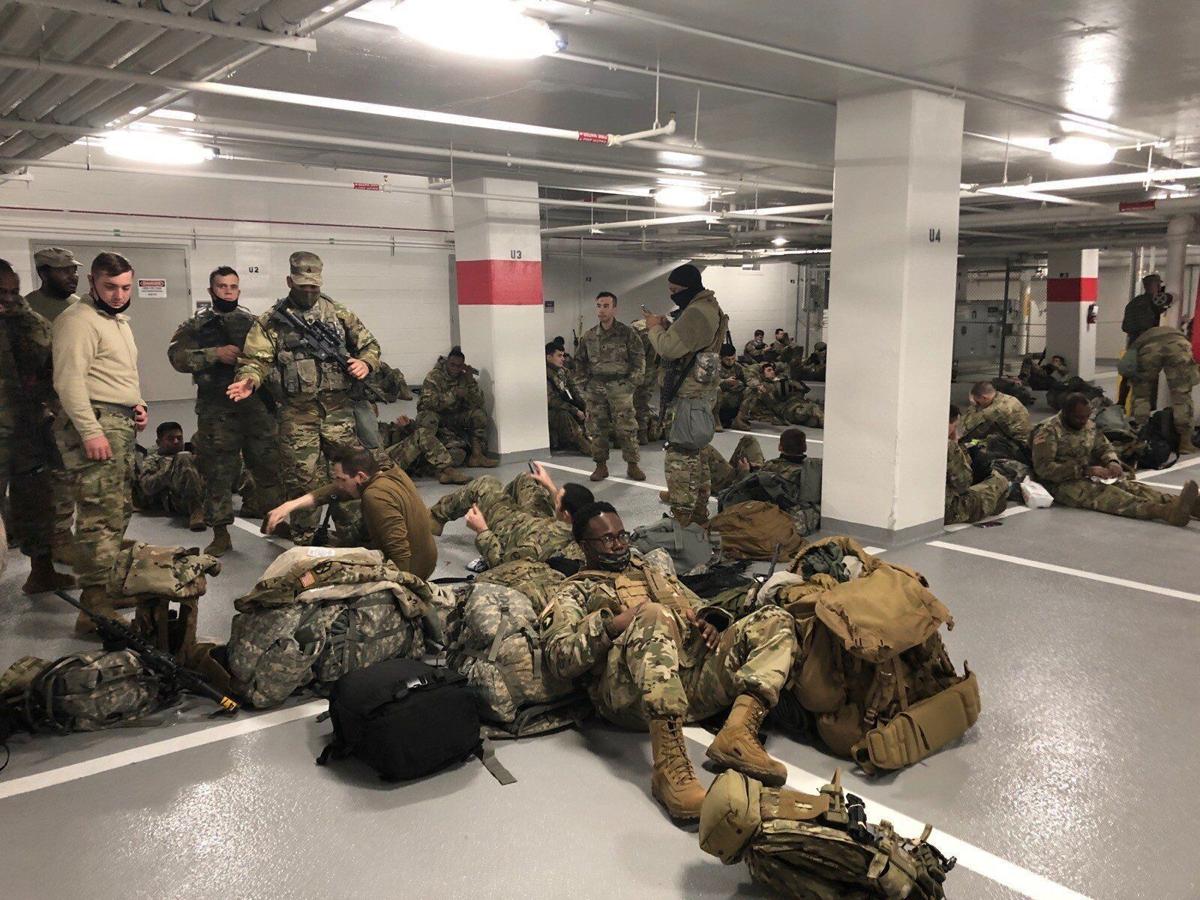 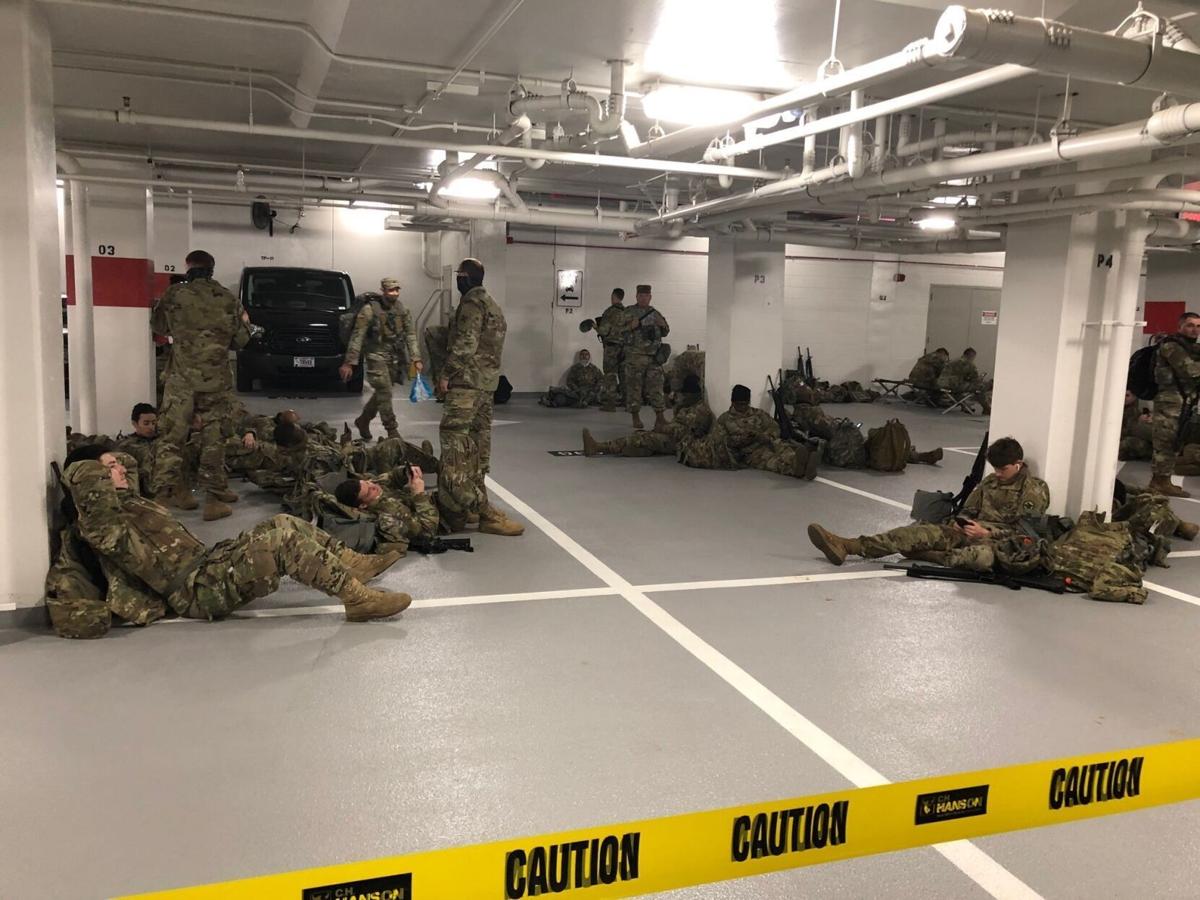 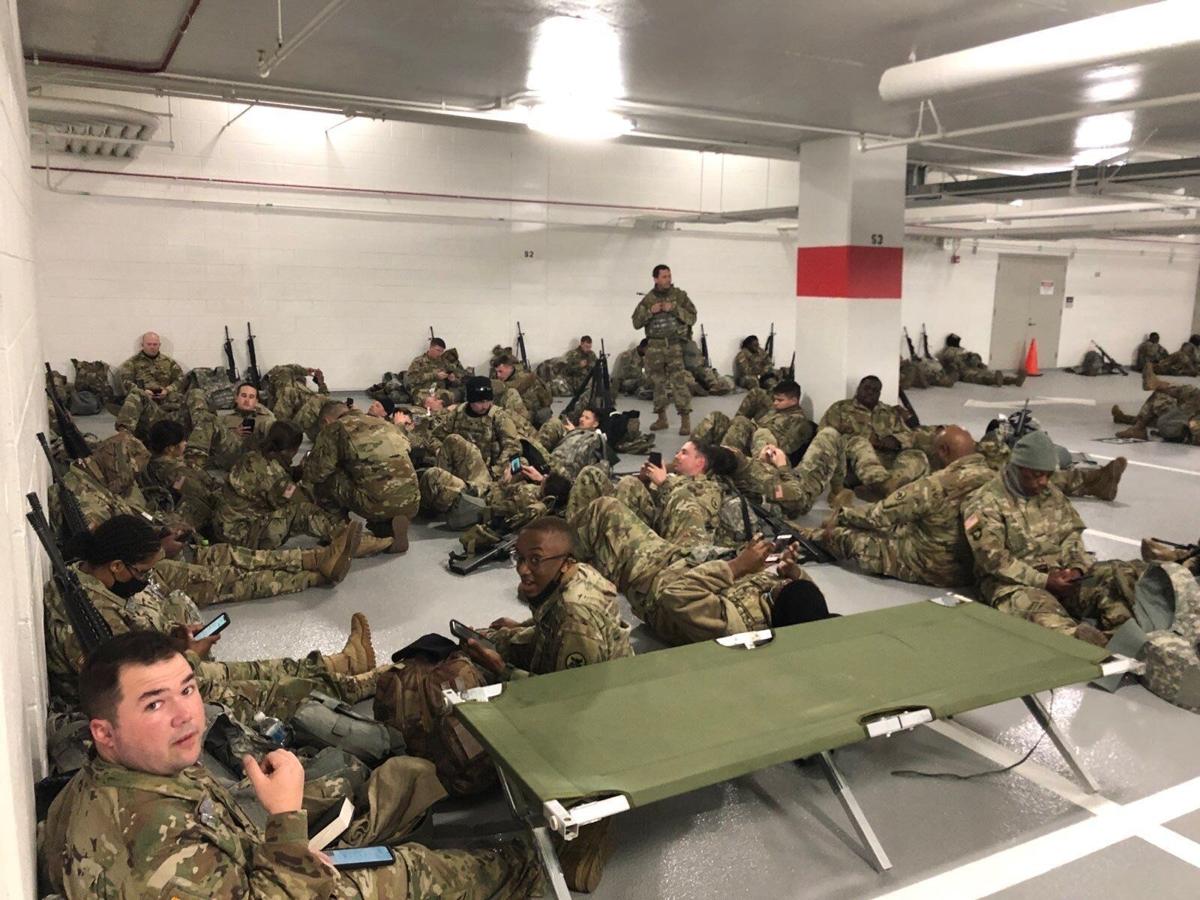 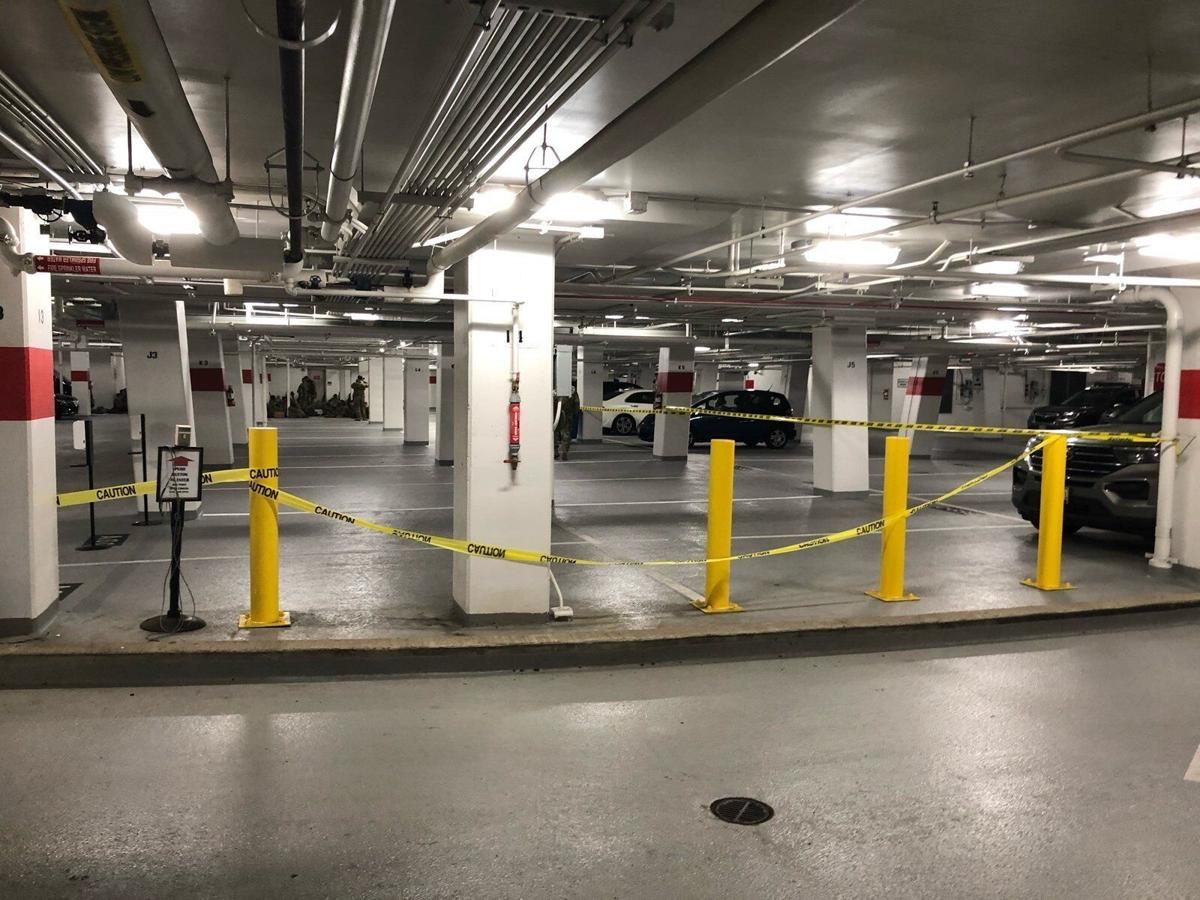 Members of the National Guard have been allowed back into the Capitol Complex after a slate of lawmakers voiced their outrage at guardsmen being banished to a parking garage as a rest area, a guardsman told CNN.

The Guard will now be allowed to rest in the US Capitol Visitor Center, the guardsman said.

The change comes after thousands of National Guardsmen were moved to a parking garage after they were told they could no longer use space within the US Capitol Complex, including areas like the cafeteria of a Senate office building, as a rest area, multiple Guardsmen told CNN.

Prior to Thursday morning, several areas throughout the Capitol Complex were designated as authorized rest areas where members of the Guard could take breaks from their shifts protecting Capitol. By Thursday morning, all those areas had been cleared out and their designations removed, the Guardsmen said.

"We honestly just feel betrayed," one guardsman told CNN earlier Thursday, noting that a day before, congressmen had come by for photos with the different National Guards units that came to Washington to support security around the inauguration. "After everything went seamlessly, we were deemed useless and banished to a corner of a parking garage."

News of the guardsmen's situation, which was first reported by Politico, drew swift outrage from lawmakers who tweeted their concern over the situation.

Sen. Mike Lee, a Utah Republican, wrote, "Very upset by this story but I have been in touch with the Utah National Guard and they are taken care of. My staff and I are investigating what happened here and will continue working to fix this situation."

Unreal. I can’t believe that the same brave servicemembers we’ve been asking to protect our Capitol and our Constitution these last two weeks would be unceremoniously ordered to vacate the building. I am demanding answers ASAP. They can use my office. https://t.co/GlSSx9nqXo

Sen. Tammy Duckworth, an Illinois Democrat, tweeted, "Just made a number of calls and have been informed Capitol Police have apologized to the Guardsmen and they will be allowed back into the complex tonight. I'll keep checking to make sure they are."

And Sen. Kyrsten Sinema, a Democrat from Arizona, tweeted, "This is outrageous, shameful, and incredibly disrespectful to the men and women keeping the U.S. Capitol safe and secure. We need it fixed and we need answers on how it happened."

Pictures provided to CNN showed guardsmen sitting or lying down in areas cordoned off with caution tape. Some appeared to be sleeping by resting against concrete pillars in the garage, just a few feet away from parked cars. There was one electrical outlet and one bathroom with two stalls for 5,000 troops, one guardsman told CNN. Though many of the troops in the pictures are wearing masks, some are not, which the guardsman said was against guidance and a serious Covid risk, calling it "totally unacceptable."

"Our guidance is if you're not eating or drinking, you need to be wearing a mask. We've already had just some in my unit alone test positive for Covid, and they're just keeping us packed together with caution tape in small areas," said that guardsman. "And that's the only authorized rest area."

The House Acting Sergeant at Arms, Tim Blodgett, said in a statement Thursday evening he will continue to "monitor the working and living condition of the Guard."

Approximately 25,000 National Guard troops were called up from all 50 states, three territories and the District of Columbia because of heightened security concerns around the inauguration of President Joe Biden. Many used the café of the Dirksen Senate Office Building, just northwest of the Capitol, as a rest area to relax, charge phones and get wireless internet. But on Thursday afternoon, the guardsmen who spoke with CNN said they could no longer use the cafeteria and could only rest in the parking garage of the nearby Thurgood Marshall Judicial Center.

The National Guard Bureau said earlier Thursday the troop relocation was temporary because Congress is in session.

"The National Guard continues to assist and support the U.S. Capitol Police. As Congress is in session and increased foot traffic and business is being conducted, Capitol Police asked the troops to move their rest area. They were temporarily relocated to the Thurgood Marshall Judicial Center garage with heat and restroom facilities. We remain an agile and flexible force to provide for the safety and security of the Capitol and its surrounding areas," the National Guard Bureau said in a statement.

US Capitol Police did not directly address the guardsmen's situation in a statement Thursday evening but instead detailed their understanding of how much "off-campus rest time" guardsmen are given.

"Recently, the Department requested that the troops' schedules be changed so they work no more than 8-hour shifts to allow for more off-campus rest time post-Inauguration," the statement said. "The Guard is reviewing the request so that logistics and schedules can be adjusted."

One week earlier, pictures of National Guard troops resting in the Capitol rotunda also caused an uproar. A spokesperson for the Guard made clear that the troops were not sleeping on duty but were resting between shifts.

"To be clear, this is not where they are lodging when off-duty. Being present is the first step in ensuring the safety of our citizens and our Nation's Capitol. Our security personnel work in shifts and rest when they can as others stand watch," a Guard spokesperson said.

Most of the 25,000 National Guardsmen who were brought to Washington to help secure the city through the inauguration will be sent home within five to 10 days, the Bureau said earlier Thursday. Approximately 15,000 troops will return home "as soon as possible," though the planning and process to begin moving them may take a few days.

There are some agencies requesting ongoing support, the National Guard Bureau said, and approximately 7,000 guardsmen are expected to stay through the end of the month.

A former U.S. Olympics gymnastics coach with ties to Larry Nassar died by suicide Thursday after being charged with two dozen crimes, including forms of human trafficking.

Tiger Woods was seriously injured Tuesday when his SUV rolled over and ended up on its side. The golf superstar had to be extricated, and his agent said he was undergoing leg surgery.

The House approved a $1.9 trillion pandemic relief bill early Saturday that includes $1,400 direct payments to Americans and a minimum wage hike. It now moves to the Senate.

Here's what comes next for Biden's $1.9T virus relief package

What's next for the bill? When can Americans expect to see their $1,400 direct payments? Is there a deadline for final passage? Get the details here.

A man who identified himself only as “COVID Bandit” hit employees at a Denver restaurant with something unexpected — an extremely generous tip.

Agony of post-COVID-19 loss of smell can run deep for some. Get today's virus developments.

What happens when COVID-19 causes a person to lose their sense of smell? Food tastes like cardboard. Depression and cognitive issues can result. The latest developments.

Mother who lost her 3 children, mom in fire during Texas power outages reflects on tragic night

As Texas recovers from the winter storm, one mother is trying to come to terms with a heart-wrenching and unfathomable personal tragedy.

Amid pandemic, flu has virtually disappeared in the US; Pfizer studying 3rd dose to fight variants

Virus update: A mass test of Pfizer’s COVID-19 vaccine in more than half a million people confirms that it’s very effective at preventing serious illness or death, even after one dose. Here's the latest.