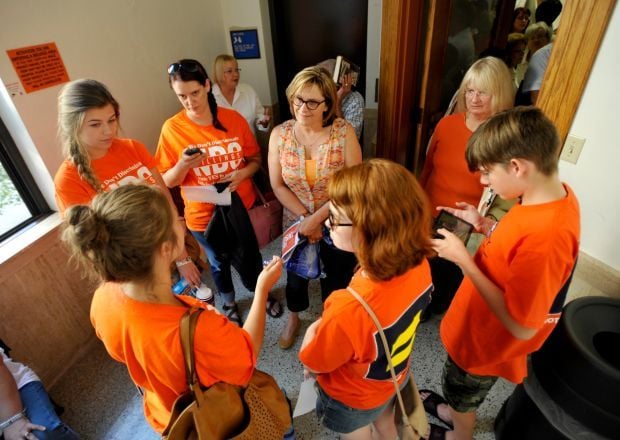 A group of NDO supporters chat before entering the Billings City Council meeting to vote on the proposed Non-Discrimination Ordinance on Monday. 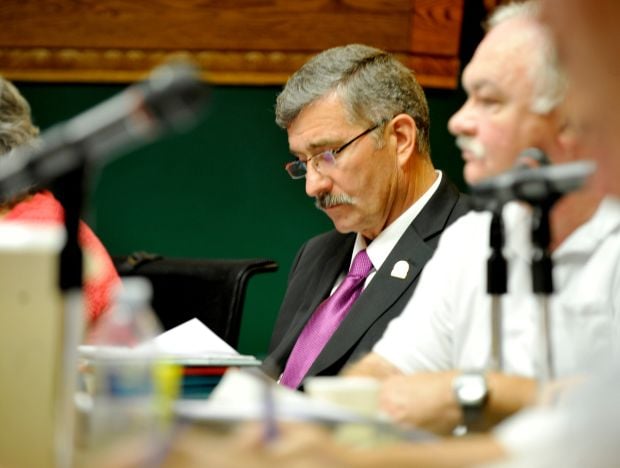 Mayor Tom Hanel looks over information during the Billings City Council meeting on the proposed nondiscrimination ordinance on July 7.

In the very early hours of Tuesday, the city of Billings made history.

Unfortunately, it will likely be remembered that we have chosen to be on the wrong side of history. At least for now.

The Billings City Council defeated the much-discussed nondiscrimination ordinance that would have made it illegal to discriminate against someone based on sexual identity. Billings Mayor Tom Hanel cast the deciding vote, in the process implicating a civic organization that does much good.

What the council did on Tuesday morning was clear and unmistakable. It sent the message that it's OK not to hire because someone is gay. It's OK to choose an inferior job candidate because someone is lesbian. Don't rent to gays. Be hostile to those who may be different -- what can they do?

The council says -- as far as Billings goes -- there's nothing to be done. It's not the city's place to protect its residents from discrimination.

Simply put, the city has failed to protect its own citizens -- people who are already here, born here, contributing here. At many public hearings gay, lesbians, and transgendered residents and their supporters came and spoke up, sharing stories of discrimination. Ultimately, the council failed to believe them, and failed to give them a minimum modicum of protection. Those in power decided to not use theirs to help those who don't have any.

Mayor Hanel applied Rotary's "Four Way Test," which includes questions: Is it fair to all concerned; is it the truth; will it build goodwill and better friendships; and will it be beneficial to all concerned?

How he could weigh those questions in light of the NDO and not have it pass is simply baffling, bordering on insincere. This entire effort to create a nondiscrimination ordinance is simply about fairness. The truth is that Hanel and the other council members didn't have to search for stories of discrimination -- they came right to them in the form of gay, lesbian and transgendered folks who shared their stories at the public hearings. This ordinance couldn't have helped but build a better, more inclusive community (read: goodwill). And, it would have been beneficial as Billings would continue to be known for its tolerance, openness and fair treatment of all citizens. That reputation would have been good for the entire community.

We can't help but think that Hanel, by invoking Rotary, was trying to side-step responsibility for his own vote -- as if Rotary had something to do with it. In the end, Hanel cast the deciding vote, but his vote wouldn't have mattered if five other council members wouldn't have joined him. And, Hanel's vote should be his and his alone, not the byproduct of service club.

We were put on the right side of history by our reaction to bigotry against the Jewish community 20 years ago. Sadly "Not In Our Town" now takes a slightly different shade after Tuesday's vote.

What kind of message does that send to our youth about leadership? Hanel and others admitted the NDO cause might be just, but the timing was wrong. So it's OK not to do the right thing if the timing is wrong? Leadership is about doing what's right regardless of timing.

And so Hanel and the other five (Shaun Brown, Rich McFadden, Denis Pitman, Angela Cimmino and Mike Yakawich) have failed on this issue and missed the opportunity to demonstrate true leadership.

The City Council should also understand that actions have consequences.

Some folks who spoke at the meeting, which began Monday evening, pointed out that events and gatherings may not happen here because gay and lesbian folks may be denied services. Businesses may opt to locate somewhere else because this may not be a comfortable environment for all their employees. Businesses don't want the hassle of having employees who are miserable because of shoddy treatment from the community. And since there are other towns with similar ordinances, this might be just enough for those businesses to say, "Not in that town," when it comes to Billings.

The timing of the vote couldn't be more ironic. The vote against the nondiscrimination ordinance --something that would have helped an entire segment of Billings be safer — happens just as the city ramps up its efforts for a public safety mill levy. The city will ask residents to support a hefty tax increase in order to keep Billings more safe as it grows. And yet, with its vote Tuesday, it has willfully chosen to make Billings less safe for others.

How the Omicron variant got its name

How the Omicron variant got its name

The NDO acronym could take on a new form. Call it the “never dies ordinance.”

Same-sex marriage, a new library and a Senate seat that flipped for the first time in more than a century make The Billings Gazette's Top 10 s…

Supporters and detractors of the NDO wait before the Billings City Council meeting to vote on the proposed Non-Discrimination Ordinance on Monday.

Your feedback: Billings weighs in on NDO vote

The Billings Gazette asked about the Billings City Council's decision on the non-discrimination ordinance. Here's a selection of responses.

City staff is recommending the Billings City Council approve the nondiscrimination ordinance during its Aug. 11 meeting — but delay its enforcement.

Once more, into the fray that has become the extended and often heated public debate over the proposed nondiscrimination ordinance, dozens of …

Nondiscrimination ordinances can be as good for business as they are for the people whose civil rights they protect.

Once again Monday, the Billings City Council heard from a long line of residents commenting on a baker’s dozen of proposed changes to the city…

The Billings City Council wrapped up at 12:07 a.m. on Tuesday after hearing from a long line of residents commenting on 13 proposed changes to…

Leaders of original Not In Our Town movement give panel discussion

When a brick was thrown through a 5-year-old Jewish boy’s bedroom window in 1993 because it was decorated with a colorful menorah, Margie MacD…

The Billings City Council began working on the finer points of a nondiscrimination ordinance Monday, but struggled to progress and even consid…

One week after an all-night session with the nondiscrimination ordinance, the Billings City Council will wade into the topic again during Mond…

Now that Billings' longest night is over, the real work begins

On Monday and into Tuesday morning, 143 people offered up to three minutes of testimony on Billings’ proposed nondiscrimination ordinance.

A group of NDO supporters chat before entering the Billings City Council meeting to vote on the proposed Non-Discrimination Ordinance on Monday.

Mayor Tom Hanel looks over information during the Billings City Council meeting on the proposed nondiscrimination ordinance on July 7.