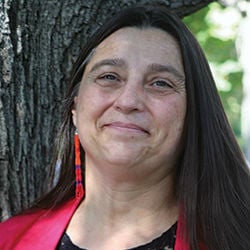 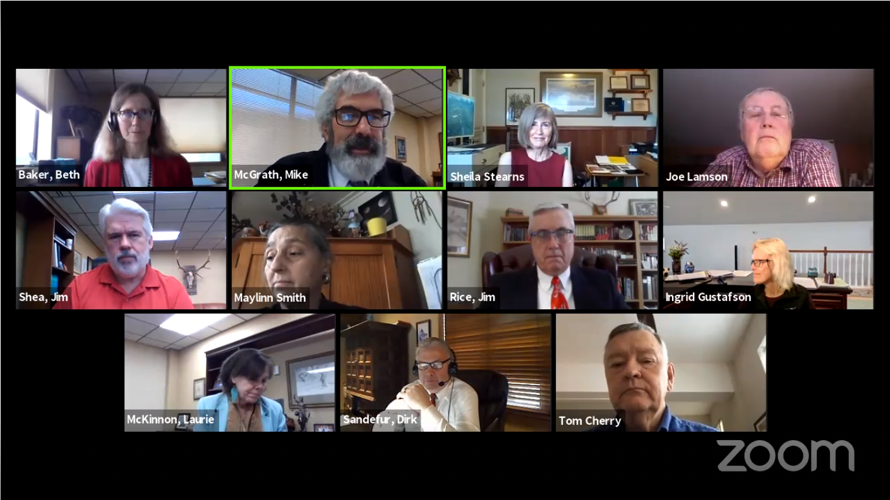 The Montana Supreme Court appointed Maylinn Smith chairman of the state Districting and Apportionment Committee during a video conference in December 2020. She replaced Sheila Stearns, who resigned the position for health reasons.

Montana tribal attorney Maylinn Smith was selected as chair of the state political Districting and Apportionment Committee on Wednesday by Montana’s Supreme Court.

Smith is an associate professor at the University of Montana Law School, and the civil prosecutor for the Confederated Salish and Kootenai Tribes. She replaces Sheila Stearns, who resigned from the committee because of health issues.

It’s the five-member Districting and Apportionment Committee that draws Montana’s legislative districts for the coming decade based on population estimates from the latest U.S. Census. Legislative leaders appoint two Democrats and two Republicans to the committee. The chairman then serves as the tie breaker. Because of this deciding role, the chairman selection is scrutinized.

Smith was appointed unanimously by the Montana Supreme Court and said her goal was to avoid breaking ties by building consensus among the four partisan members.

“I view this as someone who can facilitate a good process and recognize the strengths of each of the committee members, and appreciate the differences in viewpoint,” Smith said. “Because to me, that’s how you reach fair resolution, to be able to listen to both sides. I can do that. I’ve done that my entire life.”

There were objections by Republican members of the committee, Dan Stusek and Jeff Essmann, about the limited search for a new chairman by the Supreme Court. Public notice was limited to the Supreme Court docket, read mostly by attorneys and no one else, Essmann said. The two Republicans asked the Court to delay the decision and advertise the chairmanship more broadly.

"From my perspective, it's a decision that affects every voter of Montana. And there's a requirement in the Montana Constitution that to me seems to require public input before a final decision is made," Essmann said, "an opportunity to be heard."

The U.S. Census population count has been delayed by the pandemic, which means there should be more time to select a chairman. In non-pandemic times, the U.S. Census would be delivered for certification Dec. 31, giving states an early look at population figures and whether changes to U.S. House representation were likely.

Clobbered by COVID-19 challenges, including travel restrictions, the U.S. Census Bureau revealed in November that it wouldn’t have the results ready by year’s end. The bureau estimated that results would come sometime after Jan. 26, or a week into the Biden presidency.

Recently, Montana’s Political Districting and Apportionment Committee was advised that certification was still on track for late January, possibly February. The earliest that states would be informed by Congress about House district changes would be late April, with some states not being notified until midyear.

“I wouldn’t say we’re totally in the dark. The Census Bureau today did come out with very vague population estimates for the United States as a whole,” Stusek said. “We’re hoping to have more information on Dec. 31, with regard to state-by-state population estimates. But, even then we don’t expect them to have finalized apportionment numbers.”

Apportionment numbers use a specific formula. Those numbers won’t be available until Jan. 20 at the earliest, Stusek estimated. He gives Montana a 65% chance at being awarded a second House district.

There have been signs that Montana’s population has increased enough to warrant a second House district. The state’s population before the Census was estimated to be larger than Rhode Island’s, which has the two House districts with the smallest population. Montana’s at-large district is the most populated district in the nation. But, if that district was divided in half, its portions would have to be larger than Rhode Island’s. There are only 435 House districts, which means for Montana to pick up a second district another state will have to lose a district.

Joe Lamson, a committee member appointed by the Democratic leadership in the Montana Legislature, was eyeing Montana’s record voter turnout in the general election. He was thinking participation supported Montana’s argument for a second district.

By the end of the month, the population projections report from the American Community Survey should provide a fresh look at how Montana’s population compares to other states, Lamson said. The ACS is an annual survey providing detailed population and housing information.

"The Census Bureau has now told us, in a call to commissioners and legislators about a week ago, that the earliest it was physically possible to get a count for state apportionment was going to be Jan. 22," Lamson said.

That late January delivery of the count means it will be President Joe Biden who receives the numbers just two days after inauguration. It shouldn't matter for Montana chances at a second House seat whether President Trump or Biden receives the count, Lamson said.

Lamson, who was state director for former U.S. Rep. Pat Williams when the Democrat represented Montana's western district, gives Montana a 50-50 chance of gaining a House district, though he would welcome the addition. Williams is the only Democrat to win Montana's at-large district, last doing so in 1994.

The Trump administration had expected to exclude undocumented immigrants from the results before delivering the population count to Congress. The exclusion would be a break from the normal "whole count of persons in each state," which the Census usually includes. Not having a whole county would hurt states like California and Texas but undercounting the population. Aside from determining Congressional districts, the population count influences how more than $1 trillion in federal funding is appropriated annually.

Montana would be the first state to regain a House seat after being designated an at-large district.

We write in our capacity as members of the Montana Public Defender Commission. We are an all-volunteer commission, formed pursuant to the 2005…

MISSOULA — The Assiniboine and Sioux people survived the 19th century despite Westward expansion, and the bison survived as well, but only now…

Racism and sexism work in pernicious ways. Although there are still open racists and sexists everywhere, thanks to the civil and women’s right…

Montana should know by April’s end if it’s getting a second U.S. House district, but the detailed numbers needed to draw the would-be district…

The Montana Supreme Court appointed Maylinn Smith chairman of the state Districting and Apportionment Committee during a video conference in December 2020. She replaced Sheila Stearns, who resigned the position for health reasons.