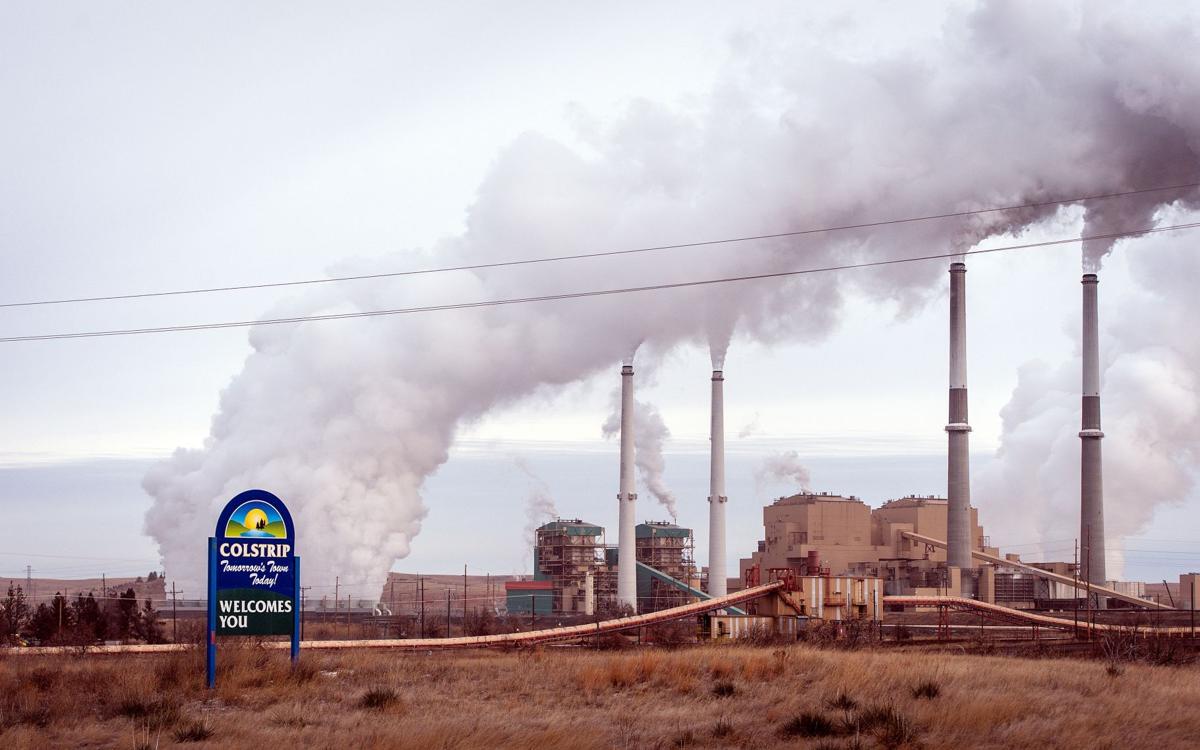 The Colstrip power plant is shown in January 2019. 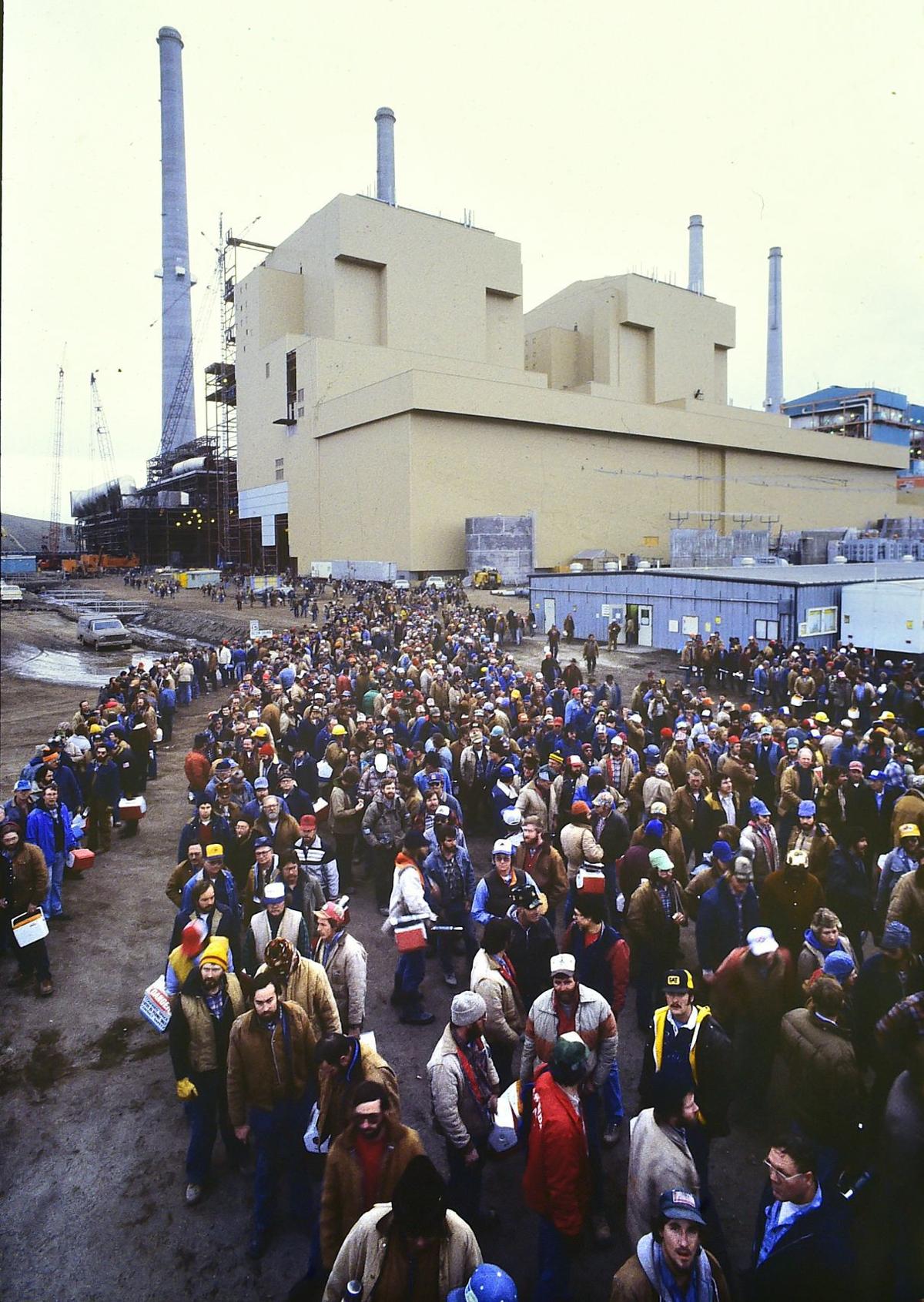 Workers file in and out during shift change at the Colstrip unit 4 construction in 1983. 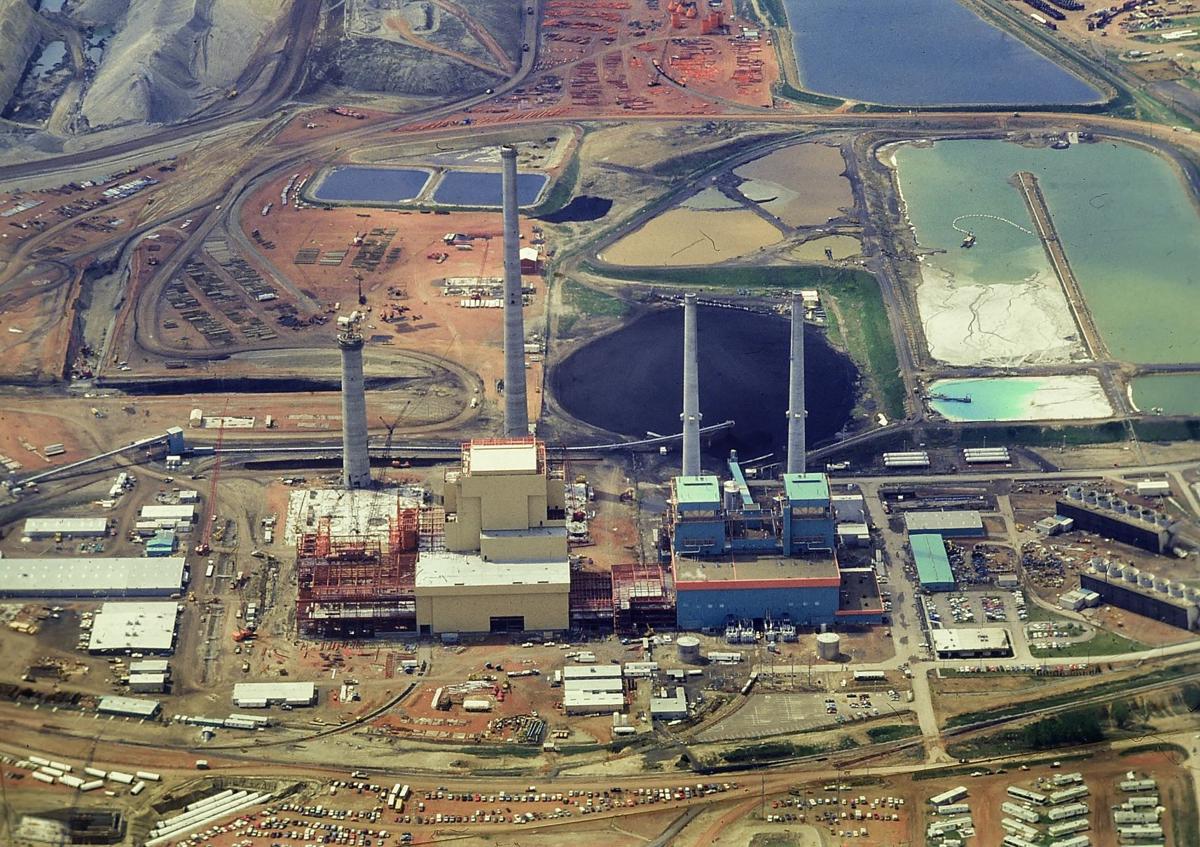 An aerial view shows the Colstrip power plants with unit 4 (left) under construction in 1981.

Colstrip Unit 1 is no longer operating. Unit 2 is expected to shut down Saturday, according to Puget Sound Energy, which splits ownership of the units with Talen Energy. The two companies announced last June that the two units, which have operated since the mid-1970s, were uneconomical due to rising coal costs and competition from natural-gas-fired power plants and renewable energy sources.

"Unit 1 shut down today and we understand that Unit 2 is closing Saturday, that it's burning through what (coal) is stockpiled," Christina Donegan, Puget Sound Energy communications director, said Thursday.

Puget will be replacing the Colstrip power with market purchases and new generation from third parties that have submitted bids to supply power to the Bellevue, Washington-based company, which has 1.1 million electric customers. The company requested bids last year for 299 megawatts of new generation, just slightly less than its capacity share from the Colstrip units shutting down this week.

Rumors about Units 1 and 2 closing were swirling Thursday around the state. By noon, the Republican Montana Senate Majority had issued a statement from Sen. Duane Ankney, R-Colstrip, stating that Saturday "Colstrip Units 1 and 2 will be closed — with the doors dismantled and welded shut."

U.S. Sen. Steve Daines, R-Mont., said on Twitter Thursday "This is a sad week for the Colstrip community, Montana families and our energy security. This outcome is a result of fringe litigation and anti-energy regulations. These attacks on our (Montana)-made energy must stop."

Units 1 and 2, with a combined capacity of 614 megawatts, employ roughly 100 workers. Units 3 and 4, each with a 734 megawatts of capacity, continue to operate, though four of the power plant's utility owners are planning to exit as early as 2025. Puget has offered to sell its 25% share of Unit 4 to South-Dakota-based NorthWestern Energy, which is Montana’s largest monopoly utility. Another 200 workers tend to Units 3 and 4. Along with Rosebud Coal Mine’s 372 employees, the power complex anchors the economy of its namesake community of 2,300 people, as well as southeast Montana.

"Because of market considerations, we generally do not comment on whether our units are operating. However at this time, the formal retirement date for both Units 1 and 2 is expected to be Jan. 5. The units will stop operating on or before that date when they run out of coal," said Taryn Williams, Talen spokeswoman, in an email to The Gazette. "After Units 1 and 2 cease operating, they will be put in a cold, dark, dry and safe condition. We expect this work to take several months.”

“As previously stated,” Williams continued. “Talen Montana aims to avoid a significant layoff of Colstrip employees and is committed to doing what is right by our employees. Because our employee transition plan is still being finalized, we are not able to provide further information at this time."

The shutdown has been expected since 2016 when the owners of Colstrip Power Plant settled an air pollution lawsuit filed against all four units by agreeing to close Units 1 and 2 no later than 2022. Plans to pull the plug on Colstrip’s oldest units accelerated as coal prices increased.

In July, Talen Montana President Dale Lebsack told Montana legislators that his company continues to lose money on Colstrip Units 1 and 2 and the units would have to close. The decision was made before Colstrip owners agreed to a new contract for coal with Westmoreland Mining LLC, the parent company of Rosebud Mine. Westmoreland went bankrupt in 2019 as the coal industry continued a yearslong loss of energy market share to natural gas.

In regulatory filings, Colstrip Power Plant owners state that the rising cost of coal will further increase customers’ power prices. In Montana, Colstrip power owned by NorthWestern Energy is already the most expensive power in the company’s portfolio, according to the Montana Consumer Counsel. MCC put the 2017 customer price of power from Colstrip Unit 4 at $73.85 per megawatt hour, with spot market power and Judith Gap Wind farm anchoring the low end at $31 or less.

Additionally, the Colstrip complex remains challenged by climate change laws passed in Washington and Oregon. Units 3 and 4 face a 2025 coal power ban in Washington, where power plant owners Puget Sound Energy and Avista Corp. are based and PacifCorp, another Colstrip owner, does business. Oregon coal power bans begin in 2030 and will affect PacifiCorp and Portland General Electric, another Colstrip owner. Between the two Pacific Northwest states there are 3.1 million Colstrip customers going offline. Those utilities are making plans for new, non-coal generation, including a large investment in renewable energy by PacifiCorp.

NorthWestern Energy, with its 374,000 electric customers in Montana, is the only utility showing interest in keeping Colstrip operational for more than a decade.

Talen's share of Colstrip Units 1 and 2 was a prime source for large customers buying power on the open market. That's because Talen isn't a regulated utility with captive customers. School districts, grain companies, oil refineries and other large industrial customers bought power from Colstrip Units 1 and 2. The latest energy contract data for the region listed just one company specifically drawing power from the units in December, ExxonMobil.

Thinking of my friends and family in Colstrip today as they shut down Units 1 and 2.#specialplace#specialpeople#greatmemories #colstrippride pic.twitter.com/UnDidNCrYA

Gazette opinion: Colstrip workers must not be forgotten

Last week was tough for Colstrip and the surrounding communities because the two oldest coal-fired power units, accounting for 614 megawatts o…

Though the new owner of Spring Creek coal mine and Montana regulators reached a temporary agreement to return miners to work in October, the mining license expires Wednesday and a new agreement has yet to be reached.

A Department of Energy report on adding carbon sequestration technology to the Colstrip Power Plant puts the cost at $1.33 billion and advises…

The Colstrip power plant is shown in January 2019.

Workers file in and out during shift change at the Colstrip unit 4 construction in 1983.

An aerial view shows the Colstrip power plants with unit 4 (left) under construction in 1981.