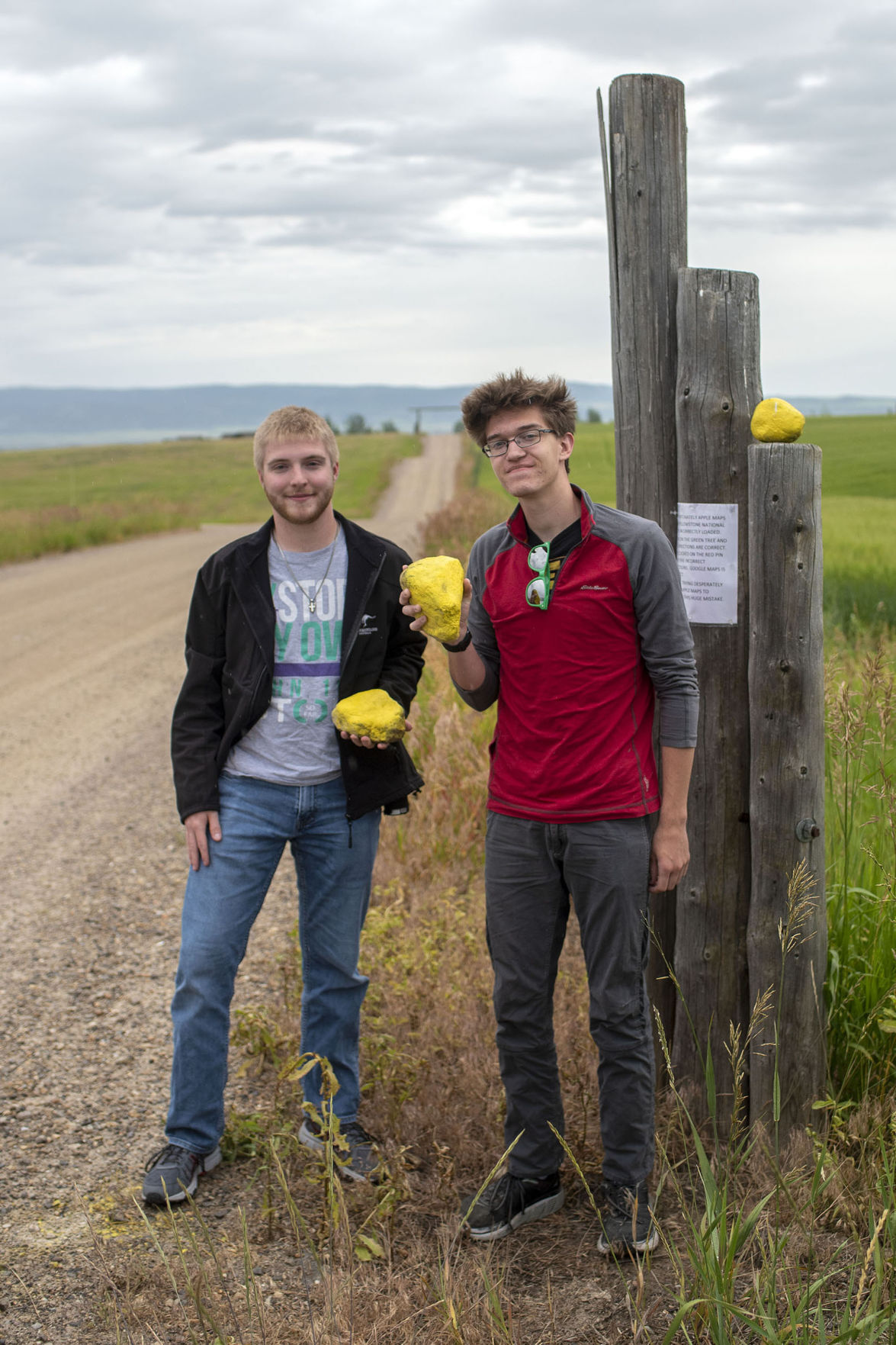 Dozens of tourists have been arriving at a small, rural subdivision about three miles north of Alta, Wyo., every day after punching "Yellowstone National Park" into the Maps app on their iPhones, including Matt Britsch and Jack Thornby of Devils Lake, North Dakota, who arrived there on July 28. The yellow stones were placed at the entrance by some of the subdivision's residents, along with a sign outlining how they've been misled by their Apple mobile devices. Apple later fixed the mistake. 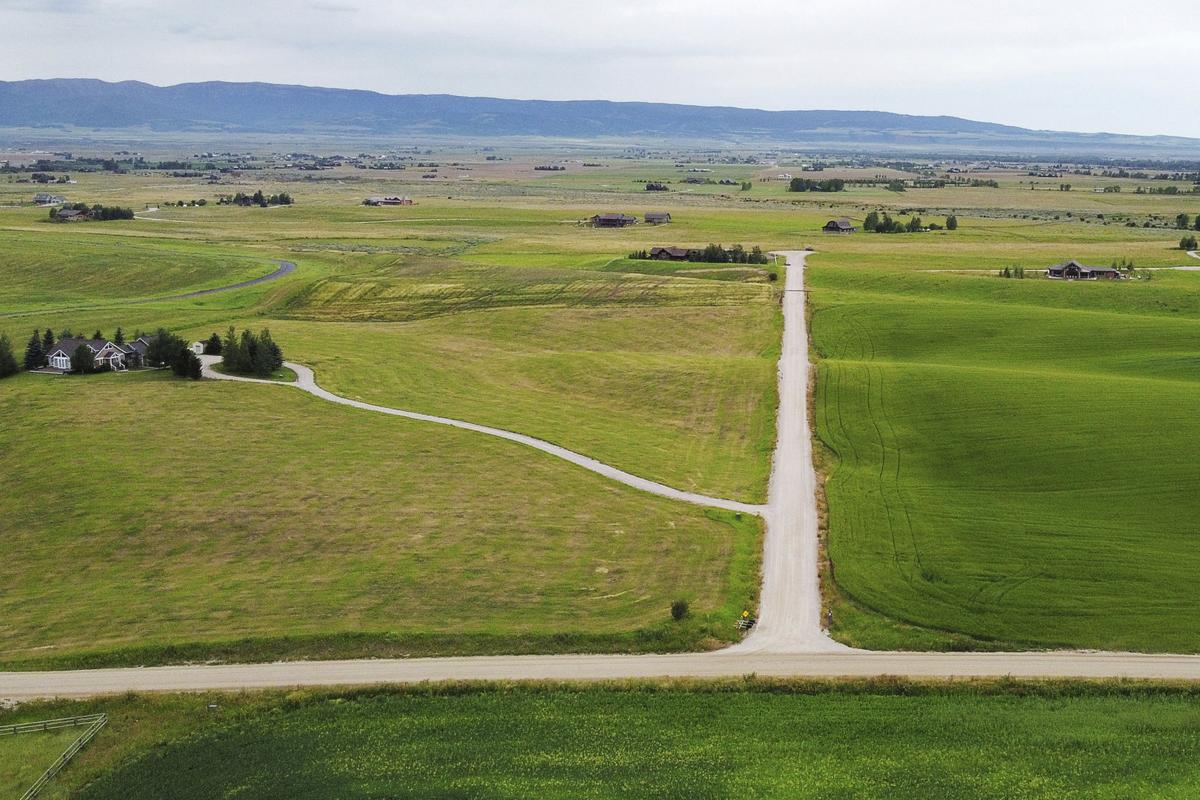 The top search result when typing "Yellowstone National Park" into the Maps app on Apple devices directs users to the small, rural Indian Ridge subdivision on the Idaho and Wyoming border about three miles north of Alta, Wyo. Apple later fixed the mistake.

Eugenio Bautista uttered that all-too-common realization after rolling to a stop along Stateline Road recently.

En route with his family from Yosemite National Park, the roadtripper from Chicago had slept in Idaho Falls. Awakening, he punched "Yellowstone National Park" into his Apple Maps app, tapped the first result that appeared and hit the road. Shortly thereafter, he ended up outside Driggs, Idaho, instead. With bison and geysers nowhere in sight, even some remarkable west-slope Teton views didn't ease the disappointment.

"I'm frustrated," Bautista said. "We got up early this morning so we could get in there early, and now we've wasted like two hours."

Devils Lake, North Dakota, residents Matt Britsch and Jack Thornby were at the same place at the same time, also drawn to residential Teton County, Idaho, by technology. They had been even more inconvenienced by Apple's error. It was one of the recent high school graduates' designated "Yellowstone days," and they'd laid their heads at the KOA Campground in Dubois. But while back on the road, their friend Siri told them to keep on rolling down the highway rather than turning off at Moran. Some 70 miles and a trip over Teton Pass later, they were under rainy skies along Stateline Road — with another 90 miles to go to West Yellowstone.

"What the heck?" Thornby said.

Britsch, his University of North Dakota-bound buddy, had some choice words for the tech giant whose faulty mapping service had stolen several hours of their day, the Jackson Hole News & Guide reported.

"This is how you treat customers who depend on (Apple) maps for getting to one of the largest and most visited national parks?" he said. "Yikes. That's bad."

Local residents got word Monday that Apple fixed the problem, to their relief. Up to that point, Bautista, Britsch and Thornby's saga played out every day — repeatedly.

About 20 vehicles per day, her neighbors guess, ended up diverted to the sprawled-out residential area along the Wyoming-Idaho border.

"We really want to get the word out," Arden said. "Yellowstone is not in Driggs."

"Hundreds of people are going to Yellowstone," she said, "and finding out it's a mailbox."

Al Bregy, her neighbor, explained how the error kept happening. People input Yellowstone National Park into the Apple Maps and up came two emblems: a green pine tree that went to the promised land of the world's first national park and a misleading red pin. Confusingly, the text of the park's address said Yellowstone was in Alta.

"What people do, because of every other situation, is they go to the red pin," Bregy said. "Have you tried it? It'll blow you away."

More sympathetic than annoyed with the uninvited guests, residents tried to make the best of it. Carol Gregory, Bregy's wife, playfully painted some rocks at their street entrance yellow. A printout posted up helped hapless tourists come to terms with their mishap.

"Google maps is correct," the sign read. "We are trying desperately to get Apple Maps to correct this huge mistake."

Gregory began troubleshooting the error with Apple to save hundreds of people hours of time and needless consumption of gas. Gregory recently was on the phone with an Apple customer service rep named Vivian while journalists were within earshot.

"I just hope this doesn't take all summer long," Gregory told the customer service rep. "I really want them to jump on this. If they know it's a problem, why can't they just put in the keystrokes to change it?"

"I completely get where you're coming from," she said. "That's something I definitely would want to get taken care of.

"I looked it up myself. If I was going to Yellowstone, I wouldn't want to show up at your doorstep. I would want to get to Yellowstone."

But it was Driggs, not Yellowstone, that greeted Kanab, Utah, residents Carol and Dan Trimble. They'd spent the night in Jackson on Monday, an hour or so drive from the South Gate, before clicking on the misguided red pin.

It wasn't their first go with Apple Map's trusty imprecision.

"We used to live in the Middle East in Abu Dhabi — same phones, same app — and we were going to a desert hotel," Dan Trimble said. "The same app sent us to this dirt road into the middle of the, you know, Arabian Desert. The farther you got the worse it got, and we hit other people who were stuck in the sand."

Comparatively, the unneeded drive over Teton Pass and up Teton Valley was not bad.

"They're both beautiful," Carol Trimble said of Driggs and Yellowstone. "This is really pretty."

Still, Dan Trimble jokingly wanted a carrot or two from Cupertino, California's $1.6 trillion homegrown business to make up for the trouble.

"They owe us for gas, time and two bottles of red," he said.

Can with mineral deposit buildup

Hayden Valley is a gorgeous expanse of grassland and meadows located right in the center of Yellowstone National Park.  It is a haven for wildlife and a popular spot for viewing some of Yellowstone’s most iconic animals.  But why does this meadow exist in the midst of what is otherwise a high-altitude forest of lodgepole pine trees?  The area’s geology holds the key.

Replacement of the Hawks Rest Pack Bridge has begun in the Bridger-Teton National Forest, and due to the nature of the work a helicopter is be…

With fire danger rated high, Yellowstone National Park had its first two wildland fires of the season this week.

Thermal features are dangerous, and not all have been photographed diligently throughout the decades. Scientists have developed a kind of 3D photography to accurately capture the features.

The fire danger in Yellowstone National Park has been raised to very high, even though there are no active wildland fires in the park.

Visitation to Yellowstone up in July over last year, despite COVID-19

The pandemic hasn’t dampened tourists’ desire to visit Yellowstone National Park. Despite the hassles of traveling with hand sanitizer, masks …

Dozens of tourists have been arriving at a small, rural subdivision about three miles north of Alta, Wyo., every day after punching "Yellowstone National Park" into the Maps app on their iPhones, including Matt Britsch and Jack Thornby of Devils Lake, North Dakota, who arrived there on July 28. The yellow stones were placed at the entrance by some of the subdivision's residents, along with a sign outlining how they've been misled by their Apple mobile devices. Apple later fixed the mistake.

The top search result when typing "Yellowstone National Park" into the Maps app on Apple devices directs users to the small, rural Indian Ridge subdivision on the Idaho and Wyoming border about three miles north of Alta, Wyo. Apple later fixed the mistake.