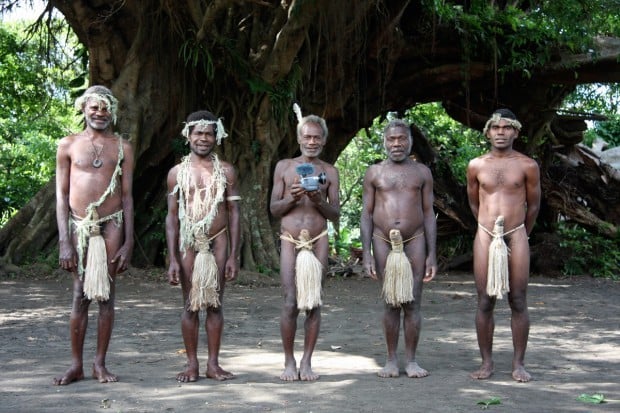 The group of Tanna islanders who stayed for a week at the Beartooth River Ranch near Belfry included a medicine man, subordinate chief, traditional dancer, translator and “a happy man.” (Courtesy photo) 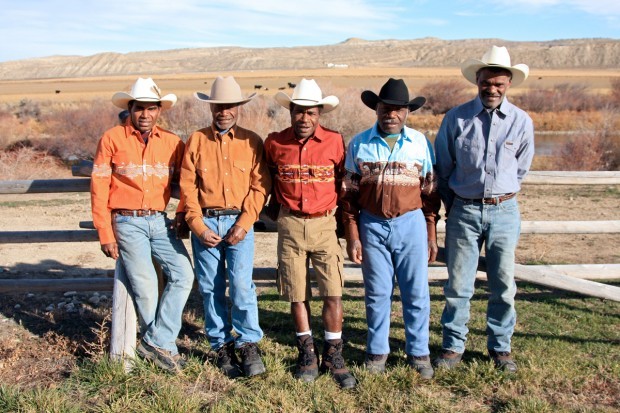 Five tribesmen from the South Pacific island of Tanna spent a week on a working guest ranch at Belfry last fall trailed by a camera crew from the Travel Channel. The episode of “Meet the Natives: USA” premieres Sunday at 7 p.m.
DONNA HEALY Of The Gazette Staff

Five tribesmen from a South Pacific island shed their native dress for snap shirts during a week on a Montana cattle ranch at Belfry last fall.

On Sunday, their exploits in the West show up in the premiere episode of the Travel Channel’s “Meet the Natives: USA.”

While the TV show sounds like a politically incorrect joke, the Travel Channel’s Web site expects the tribesmen to “dance their way into America’s hearts.”

The group hails from the island of Tanna, part of the republic of Vanautu, a chain of 13 major volcanic islands and dozens of tiny islands in the South Pacific, east of Australia.

The islands, which were formerly called the New Hebrides, gained their independence in 1980.

Although the five islanders were aware of the outside world, they maintain traditional tribal customs. The five had never left Vanautu before coming to America, where they were trailed by the Travel Channel’s camera crew.

Their first stop in the United States last fall was the Beartooth River Ranch at Belfry, a working guest ranch owned by Tanya and Michael Pelican.

The islanders, accustomed to wearing loincloth-like grass sheaths, were outfitted in Western clothes and fur-lined bombardier caps for their ranch stay.

Two of the men rode horses. They tagged along on a hunting trip, ate venison and slept in sleeping bags in the bunkhouse with their clothes on, said Connie Pelican, Michael’s mother.

The group also made short forays off the ranch to sample cowboy culture.

At Cassie’s Steak House in Cody, Wyo., they learned the cowboy two-step.

“The band made an announcement that they had special quests. The women just came up and were grabbing ’em and taking ’em out to dance and having a good time,” she said.

At Miller’s Horse Palace, east of Laurel, they watched a rodeo.

“W e introduced them to the crowd, and everybody was just happy as heck to meet them and try to talk to them,” Connie Pelican said.

At Cooke City, the islanders touched their first snow. After getting drawn into a snowball fight, they asked if they could take some snow home.

Although they never got to participate in a branding, they tagged along on other ranch chores.

“We doctored cows, and the medicine man was interested in that,” Tanya Pelican said.

The group of five included the medicine man, a subordinate chief, a traditional dancer, a translator and a “happy man.” The Pelicans were never clear on the exact role of the happy man.

“He just made everybody happy,” Connie Pelican said. “He was good at it. They were always smiling and laughing. They just absolutely thoroughly enjoyed themselves.”

“I don’t care what you put in front of them, they’d eat it and clean their plates,” she said.

They mixed their food all together, piling and stacking salad on their mashed potatoes.

For the television show, the five Tanna islanders also traveled with the camera crew to New York City, where they rang the bell of the New York Stock Exchange, and to Southern California, where they took in the mud baths and roller coasters of Orange County. Other episodes show them in Illinois and Georgia.

The program premieres at 7 p.m. Sunday on the Travel Channel.

The group of Tanna islanders who stayed for a week at the Beartooth River Ranch near Belfry included a medicine man, subordinate chief, traditional dancer, translator and “a happy man.” (Courtesy photo)

Five tribesmen from the South Pacific island of Tanna spent a week on a working guest ranch at Belfry last fall trailed by a camera crew from the Travel Channel. The episode of “Meet the Natives: USA” premieres Sunday at 7 p.m.
© Copyright 2021 Billings Gazette, 401 N Broadway Billings, MT | Terms of Use | Privacy Policy
Powered by BLOX Content Management System from TownNews.com.
You don't have any notifications.