The third convicted Montana Freemen is living in Billings after spending the majority of the last 25 years of his life in prison.

Now 78, Daniel Petersen maintains the same ire against the federal government that he had in 1996, when an undercover FBI operation placed him and two other Freemen in custody, sparking a standoff in Garfield County that spanned months.

“I make no apologies,” Petersen told the Gazette. A white hat covered his head reading “#3 Montana Freemen/Where We Failed Trump Will Succeed.”

He spoke while sitting at a table next to fellow Freemen Rodney Skurdal, who thumbed through legal tomes that he’d annotated and filled with sticky notes for reference.

The two met at a time when both were in dire financial straits. Skurdal, who purchased his property in the Bull Mountains with settlement money from a work injury, was losing his log home and 20 acres to the Internal Revenue Service. Prior to that, he butted heads with the Musselshell County Sheriff’s Office over his refusal to pay for speeding tickets or register his vehicle. It was after his declaration of war against what he calls “the democracy of the United States of America” appearing in the local paper that he came to the attention of Petersen.

The Freemen bonded over their self-proclaimed status as sovereign citizens, above taxation or any kind of federal regulation. Their justification came from a tapestry woven of legal codes, documents from the nation’s foundation and Bible quotations. That ideology, passed along during seminars hosted occasionally in Skurdal’s home, resulted in what charging documents reported to be about $1.8 million in fraudulent funds.

“There isn’t a Freemen group. It’s not a membership, it’s a set of beliefs,” said Ken Toole, who served as the co-director of the Montana Human Rights Network when the 1996 standoff occurred.

The MHRN was one of the first organizations to begin publishing warnings of militias and far-right extremists who emerged in the 1990s. Their contact with the press spiked following the Oklahoma City bombing in 1995. Toole, who helped launch the non-profit, encountered those calling themselves Freemen as early as the late 1980s. During public meetings, they attempted to stir debates on topics that included taxes and the Magna Carta.

“Often the community response was they were a little nutty until something dramatic happened,” Toole said.

The appeal of the seminars stemmed from a financial crisis that gouged Midwestern farmers through the 1980s. Those who bought into farms in the early part of the decade found themselves in an overinflated market combined with high interest rates, and unable to avoid going into bankruptcy. Petersen, along with LeRoy Schweitzer, offered them a way to pay off their debt and put food on their tables through bogus money orders to banks and credit card companies.

The message appealed to landowners like the Clarks, who received a Farmers Home Administration loan for several hundred acres of land outside of Jordan in 1979. Steven Shay, a Laurel native and professor at Oregon State University, earned his doctorate with a dissertation on the Montana Freemen movement. He traced the path the Clarks took from their Garfield County farm to the Freemen seminars hosted by Schweitzer and Petersen.

“With so many farms under the threat of foreclosure, the Reagan administration did very little to address the issue … A moratorium was enacted on farm foreclosures, but families like the Clarks spent the next few years between 1984 and 1991 wondering how to get out of debt. When the foreclosures started up again, that’s when the Clarks were looking for answers, looking for help,” Shay said.

Shay told the Gazette that the Freemen’s activities in Roundup did not go unnoticed. He said scrutiny from local authorities increased after Timothy McVeigh ignited a truck bomb outside of the Alfred P. Murrah Federal Building in Oklahoma City, killing 168 people.

“The local sheriff was really trying to get larger agencies to focus on this, and that didn't happen until the Oklahoma City bombing. They were no longer seen as crazed wackos that drive around without license plates,” Shay said.

Schweitzer, Skurdal and other Freemen left Musselshell County for the Clarks’ foreclosed ranch in September 1995. They made the trip while under surveillance of local and federal authorities, who did nothing to stop them from finishing the trip and turning the ranch into the “Justus Township.”

It was while acting as constable for the township that Daniel Petersen and others robbed an ABC News crew of their equipment a month later, according to a timeline previously published by the Gazette. In February of the next year, Freemen attacked and detained a reporter and photographer with the Associated Press. With the arrest of Petersen and Schweitzer in March 1996, the FBI surrounded the Clarks’ property and settled in for negotiations. The bloody conclusions of Ruby Ridge and the Waco siege were still fresh wounds for both the bureau and the rest of the country, who watched through the lenses of a legion of journalists who descended on Jordan.

The FBI’s strategy of finding a peaceful solution included allowing one member of the Clark family to leave the property to speak with Schweitzer imprisoned in Billings. The standoff ended in June with the Freemen’s surrender. Twelve people faced nearly 500 charges in the subsequent trial.

“I think one of the reasons that it is a really underreported, underrepresented case is that it ended quietly. There was no death toll, there was no gunfire, but the threat was always there,” he said.

Travis McAdam, the current director for combating white nationalism and defending democracy at MHRN said the massive paper trail created by the Freemen’s campaign of fraud and terror more than likely assisted prosecutors in the case. It was a trail, he said, that does not exist in the digital age. Those like Ammon Bundy, who has participated in two standoffs with federal authorities, have used the COVID-19 pandemic to encourage the flouting of public health orders and the harassment of officials during the past year. Bundy has said several times that the states of emergency announced by governors were a form of dictatorship.

“He’s imparting this dangerous ideology, but then it’s basically up to you all to go out and do the work. … Now, anybody can put their idea out there on YouTube or wherever with a link to a crowd funding source.

“Ammon Bundy’s People’s Rights network has been active mostly in Washington and Idaho, but they are one of the organizations that have used the pandemic to their advantage. It’s one of the groups that looked out there and saw a division that was happening,” he said.

When residents of Montana first started testing positive for COVID-19 in the spring of the 2020, the Flathead Beacon reported that a member of Flathead County's own board of health questioned the threat of the virus. Along with protesting what she saw as an intrusion into individual rights by the government, Dr. Annie Bukacek also claimed that the Centers for Disease Control and Prevention could be inflating the death toll of COVID-19.

Like the Freemen opening their doors to desperate farmers, McAdam said Bundy and others have formed an entire network through a fear of government overreach. That fear came to a crescendo Jan. 6, when thousands filled the Capitol building in an attempted insurrection fueled by the conspiracy of the election being stolen from former President Donald Trump. At least six Montana residents have been arrested for participating in the Capitol riots that left four people dead.

Toole, who said he watched the brush fire of the Freemen burn until it was under the feet of county, state and federal authorities, saw the same philosophies and conspiracies echoed 25 years later.

“All of this stuff is conspiracy-based. If you have a base people holding that kind of mentality where anything going against their conviction is a lie, somebody somewhere is going to light the fuse. …When facts go out the window, all you’ve got are beliefs, fear and anger,” Toole said.

"No Trespassing" signs at Justus Township

Twenty-five years ago this week, the tiny town of Jordan, Montana, was overrun. 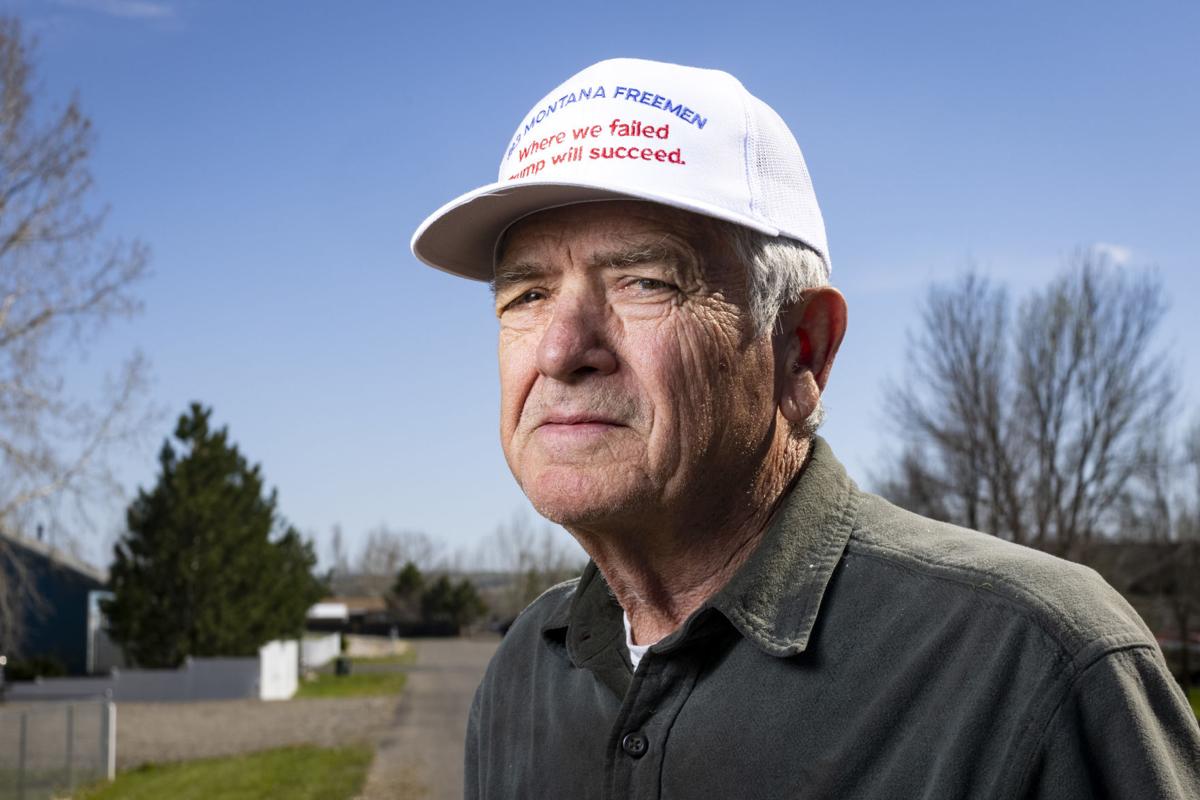 Daniel Petersen poses for a portrait on Thursday, May 6, 2021. 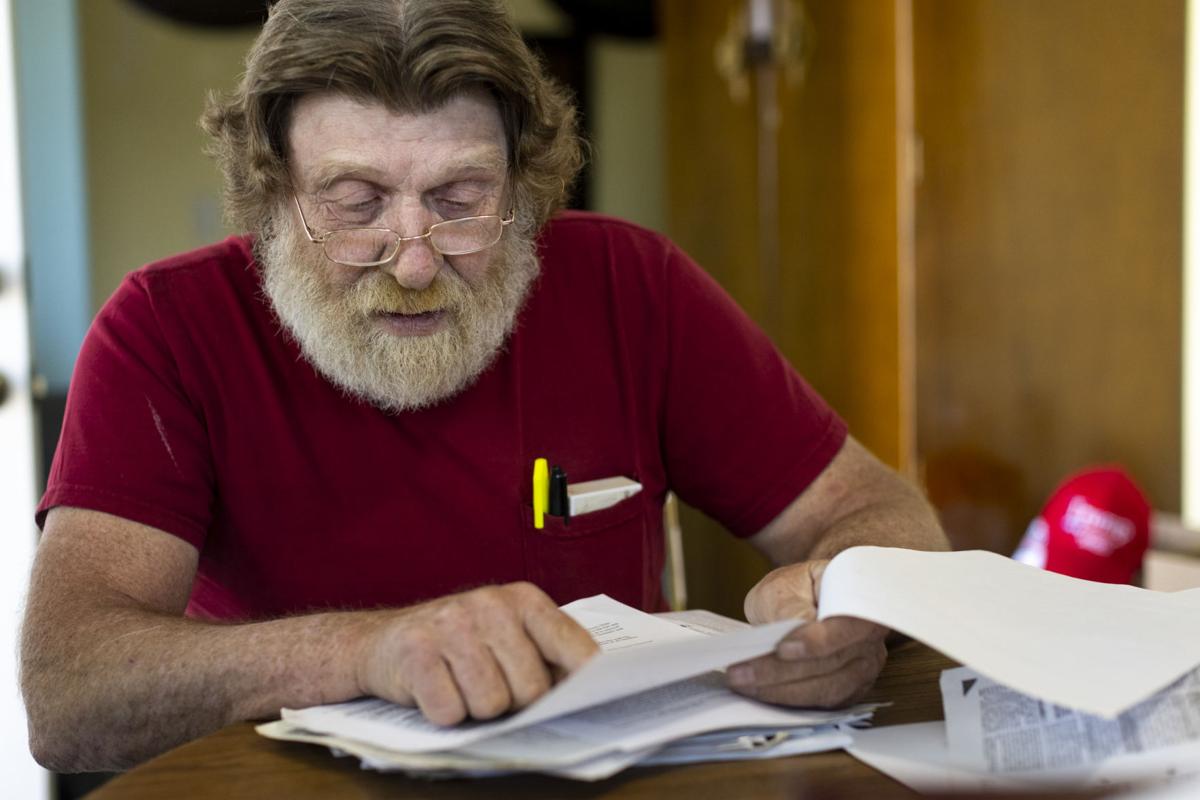 Rodney Skurdal reads documents which he says support his claims as he and Daniel Petersen are interviewed by the Billings Gazette on Thursday, May 6, 2021. 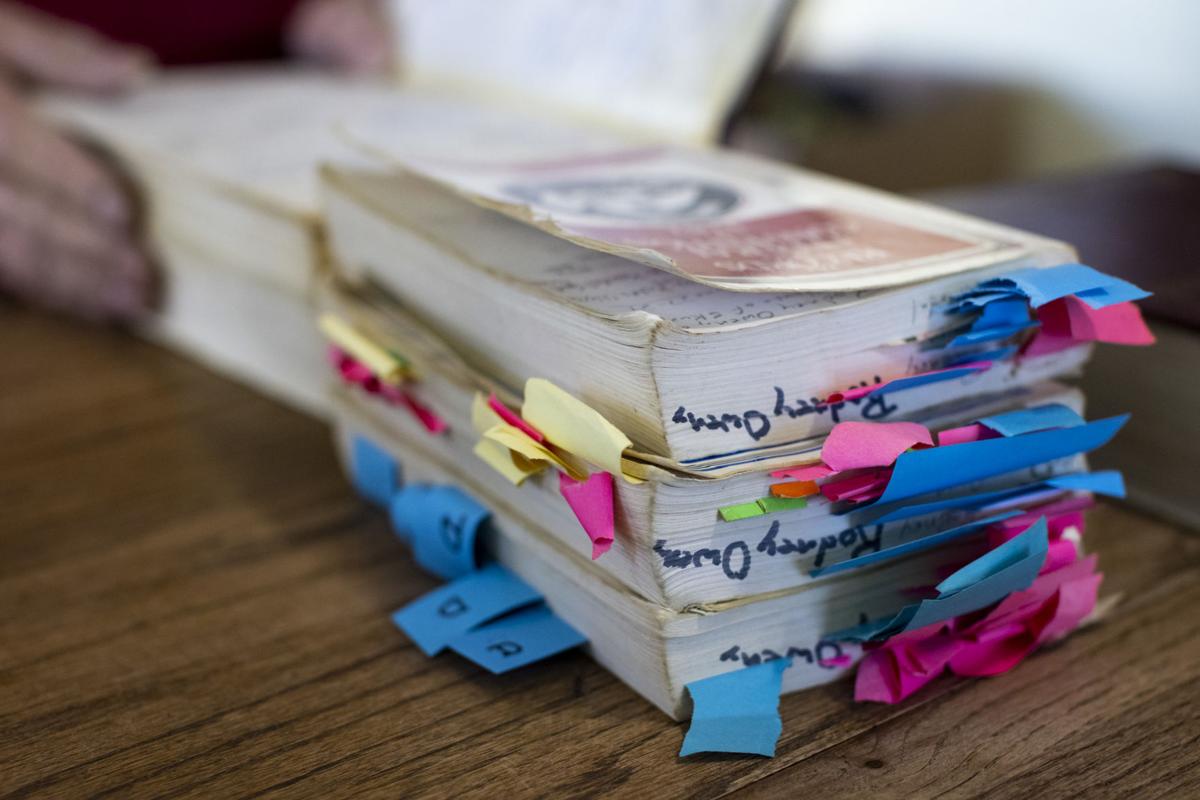 Heavily bookmarked volumes of “The Records of the Federal Convention of 1787” as Daniel Petersen and Rodney Skurdal are interviewed by the Billings Gazette on Thursday, May 6, 2021. 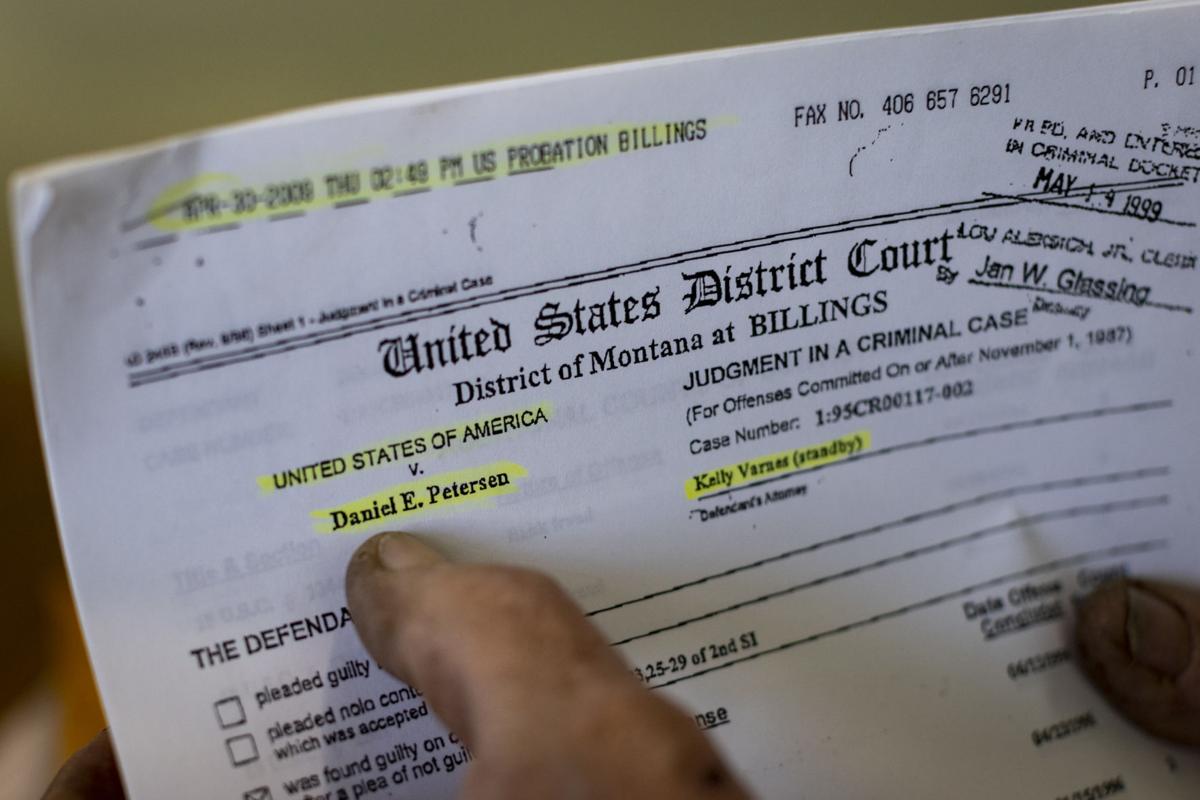 Daniel Petersen shows court documents from his case as he and Rodney Skurdal are interviewed by the Billings Gazette on Thursday, May 6, 2021. 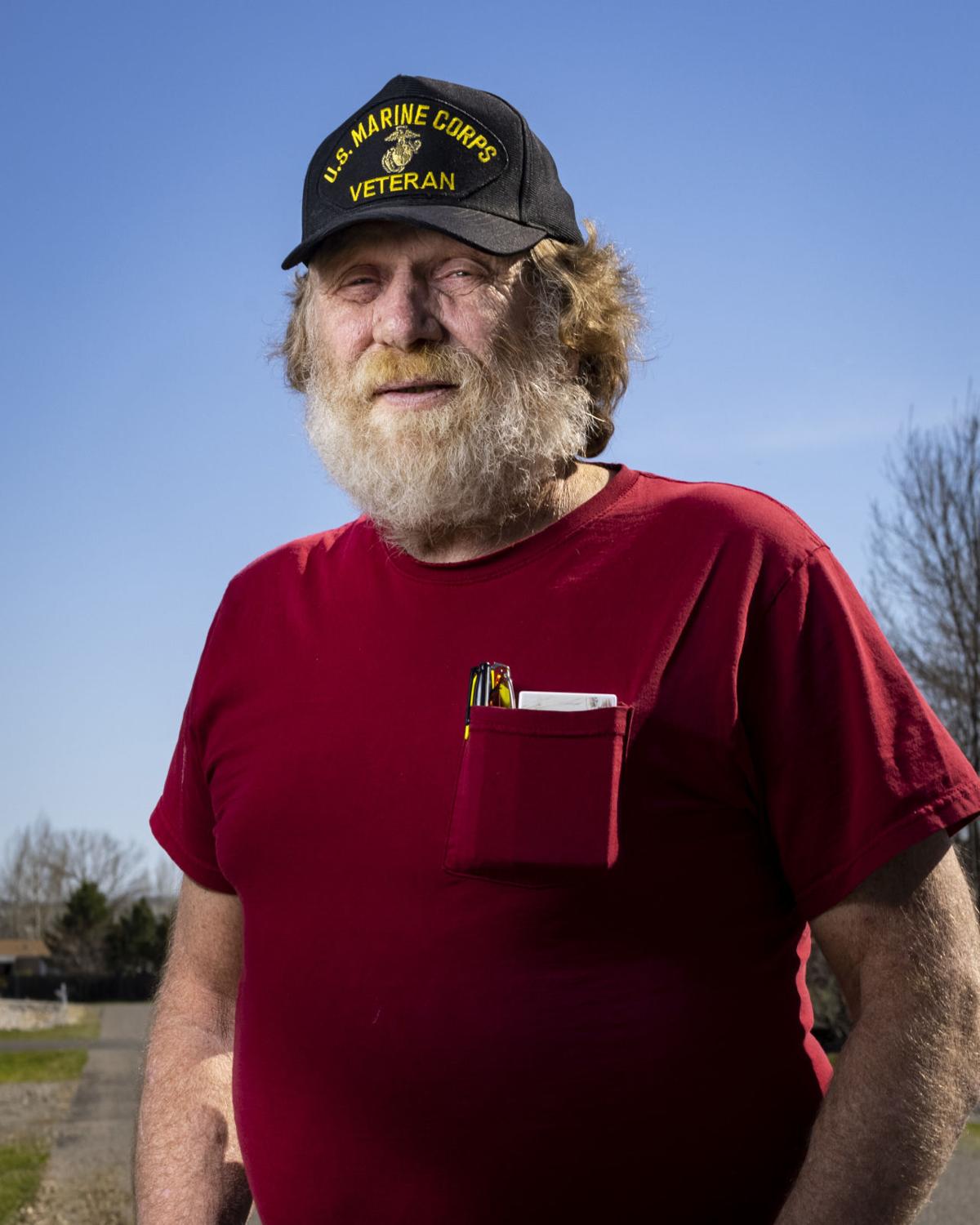 Rodney Skurdal poses for a portrait on Thursday, May 6, 2021. 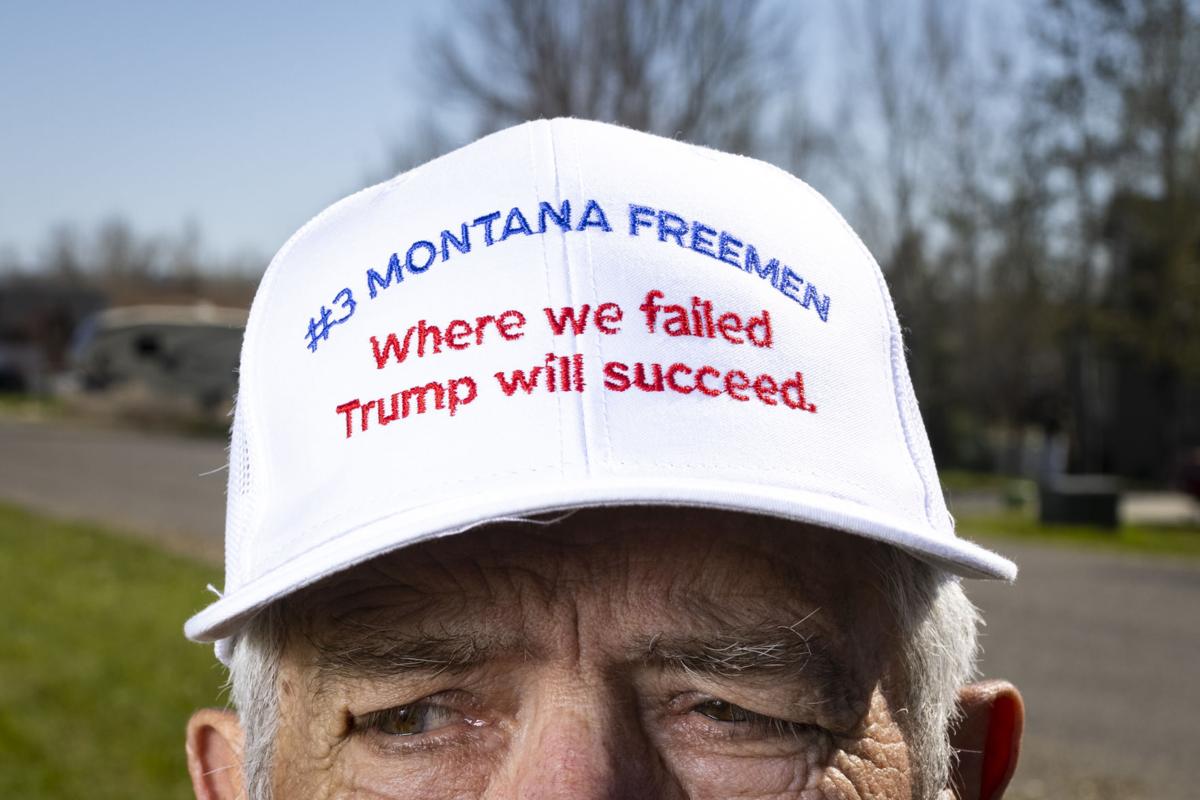 Daniel Petersen wears a hat supporting Donald Trump as he poses for a portrait on Thursday, May 6, 2021.