As his horse lost its footing on the edge of a steep drop-off above the South Fork of the Shoshone River, Vern Streeter attempted to hop off.

“I decided I should bail, but just then he got purchase and popped up,” Streeter said.

That’s when his foot got stuck in the stirrup. Dangling off the side of his horse, hands scrambling on the rocky ground, Streeter struggled to get free.

“It couldn’t have happened in a worse spot,” said Austin Stoltzfus, who was wrangling for Streeter and the four other riders and 10 horses making the trip.

“It was 8 to 10 feet of sloped ground and then 300 feet straight down into the Shoshone River.”

The crew was only three miles into a 60-mile horsepacking trip into Wyoming’s Teton Wilderness, just south of Yellowstone National Park and the most remote area in the Lower 48 states.

Luckily, Streeter’s boot popped loose and he fell to the trail, not off the cliff. Although ashen in complexion, he was unharmed. His boot, however, had flown down the cliff when his foot popped loose. Luckily it was retrievable.

“My horse was looking at me like, ‘What’s the big deal?’” Streeter said.

Shaken, he decided to walk his horse in tight spots on the trail from then on.

The five-day expedition that began Aug. 10 was Streeter’s idea to highlight a fundraising campaign to build a worship center for Billings’ Harvest Church, where he is lead pastor. He got the notion from the prophet Ezekiel who, in the Bible, talks about a river flowing from a temple that nourishes trees, fish and wildlife along its banks.

“We would like to be a part of that kind of healing and flourishing for our community,” Streeter said.

From that passage sprung the idea of trekking to the headwaters of the Yellowstone River to film a sermon atop Younts Peak that would be presented to the congregation and the public to help bolster the fundraising efforts. After all, the Yellowstone flows right through Billings nourishing people, fish, animals and farms along its nearly 700-mile route.

At first Streeter was going to backpack into the 12,156-foot tall mountain, whose snowmelt drains into the south and north forks of the Yellowstone River. But after looking at maps and seeing the difficulty of the terrain he approached Stoltzfus, “a pure cowboy,” to help lead the horsepacking trip.

“It’s always fun to help someone accomplish a goal,” Stoltzfus said, although he added that Streeter has some crazy ideas.

In the past, Streeter made a similar trip by hiking to the summit of Granite Peak, Montana’s highest mountain, to film a sermon. So the idea of trekking to Younts Peak wasn’t out of character for the active hunter, backpacker and paraglider. The notion of taking a film crew along, though, necessitated horses which required a wrangler like Stoltzfus. All together the crew included two wranglers, two camera operators, one sound technician and Streeter. Unfortunately, they couldn’t find much detailed information on the best route to reach the top of the mountain.

From a base camp at Marston Creek — about 24 miles deep into the wilderness — the crew awoke at dawn on the third day to make a push to the peak, traveling 12 hours roundtrip. Riding as far as possible the group tied the horses up to the mountain’s last trees before climbing about 2,200 feet in elevation to the summit from the north.

“The Tetons (mountains) looked like they were right next door,” Streeter said of the vast views. “You could see into Montana. It was a perfect day.”

“When we got to the top of Younts I swear we could see the Crazies (mountains in Montana),” Stoltzfus said. “I’ve never seen more country.”

With cameras rolling Streeter’s message was filmed in one take, a euphoric moment, he said. Then it was all over — all of the planning, worrying and trekking, except for the return trip, was at an end.

From the top of the peak he had cellphone service that enabled him to call his wife to announce the team’s success. She was vacationing in New York City.

“She’s in New York City, the most densely populated place in the Lower 48, and I’m in the most remote place. We were both so happy.”

Parishioner Cody Linde was the main cameraman. Streeter said it was Linde, a former graduate of Montana State University’s film school, who talked him into making a documentary of the entire trip — telling the whole story, including why the trip came to life in the first place.

“It was kind of a disparate group of people with the goal of getting Vern on the summit,” Streeter said. “It was cool to see everybody rally around.”

The film will be shown on Oct. 20 at Harvest Church.

A 38.18-pound channel catfish that Colstrip angler John Smith reeled in on July 7 has been certified as a new Montana record.

After 4 years of renovations, Mammoth Hotel in Yellowstone reopens for visitors

At 10,289 feet in elevation, Ramshorn Peak doesn’t claim lofty status in Montana, but the view from the peak in the Gallatin Range is undeniab…

A closure on Mount Washburn will be in effect from Sept. 9-13 as crews work to improve the trail surface.

The public is invited to celebrate the spectacle of raptor (bird of prey) migration on Saturday, Sept. 21, in Yellowstone National Park’s Hayd…

From swamped to glass: Canoeing 37 miles on Yellowstone Lake

YELLOWSTONE LAKE — Swamping the canoe within the first two hours of a six day trip was not a good omen.

The Yellowstone River's important contribution to Montana's agriculture, wildlife and recreation and the challenges it faces will be the topic…

Born and raised in southeastern Montana, Dawson Dunning has carved out a niche as a cameraman in the competitive world of conservation filmmaking. 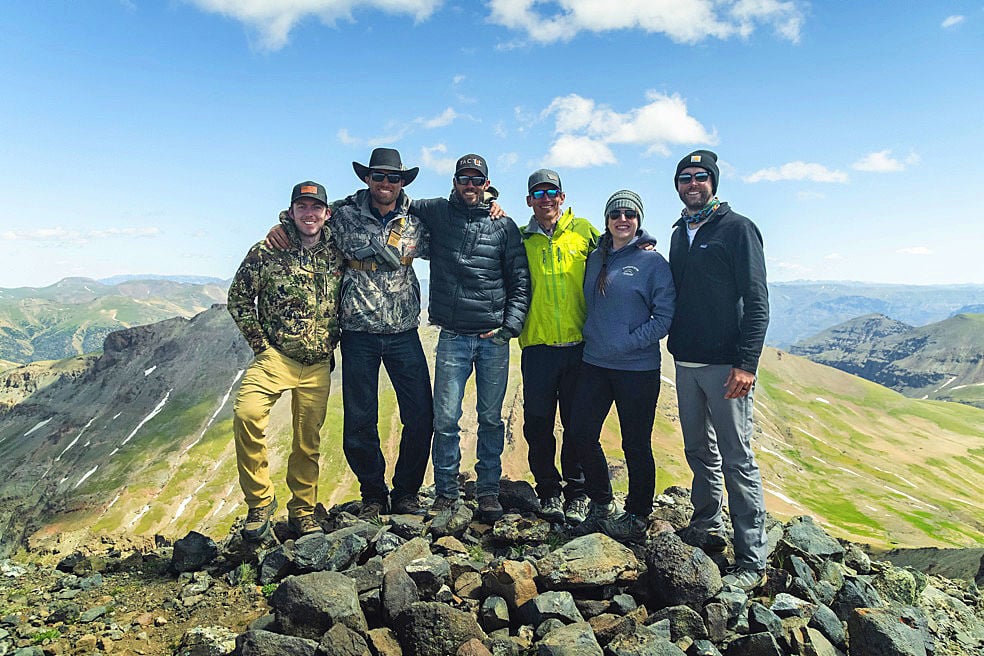 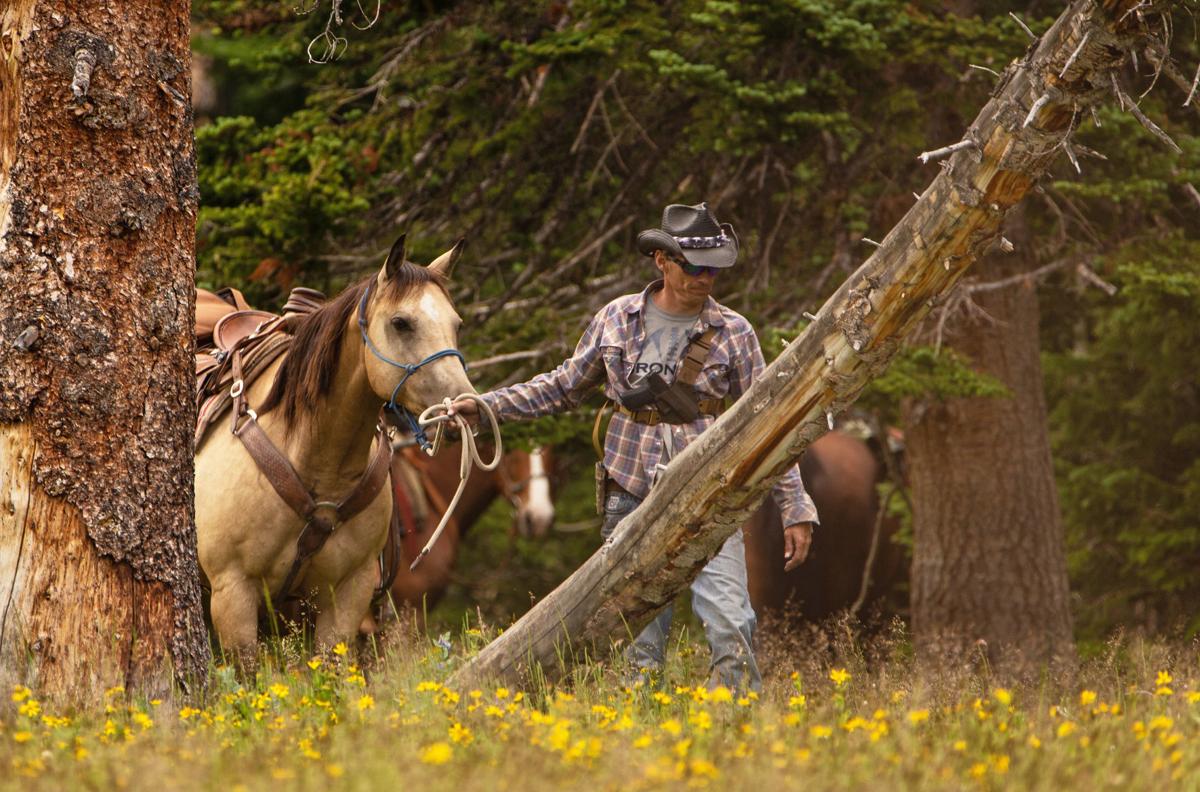 Packing a pistol and bear spray because of an unnatural fear of grizzly bears, Vern Streeter leads his horse. During the entire trip through the grizzly stronghold the crew never saw a single bear. 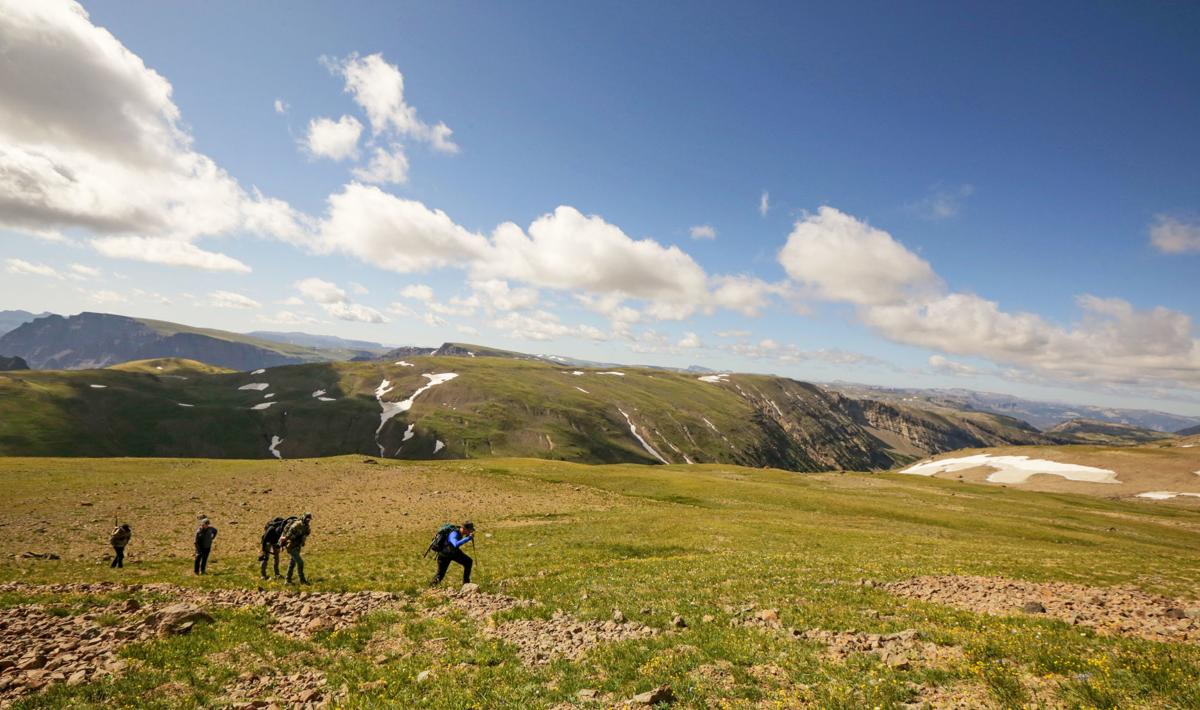 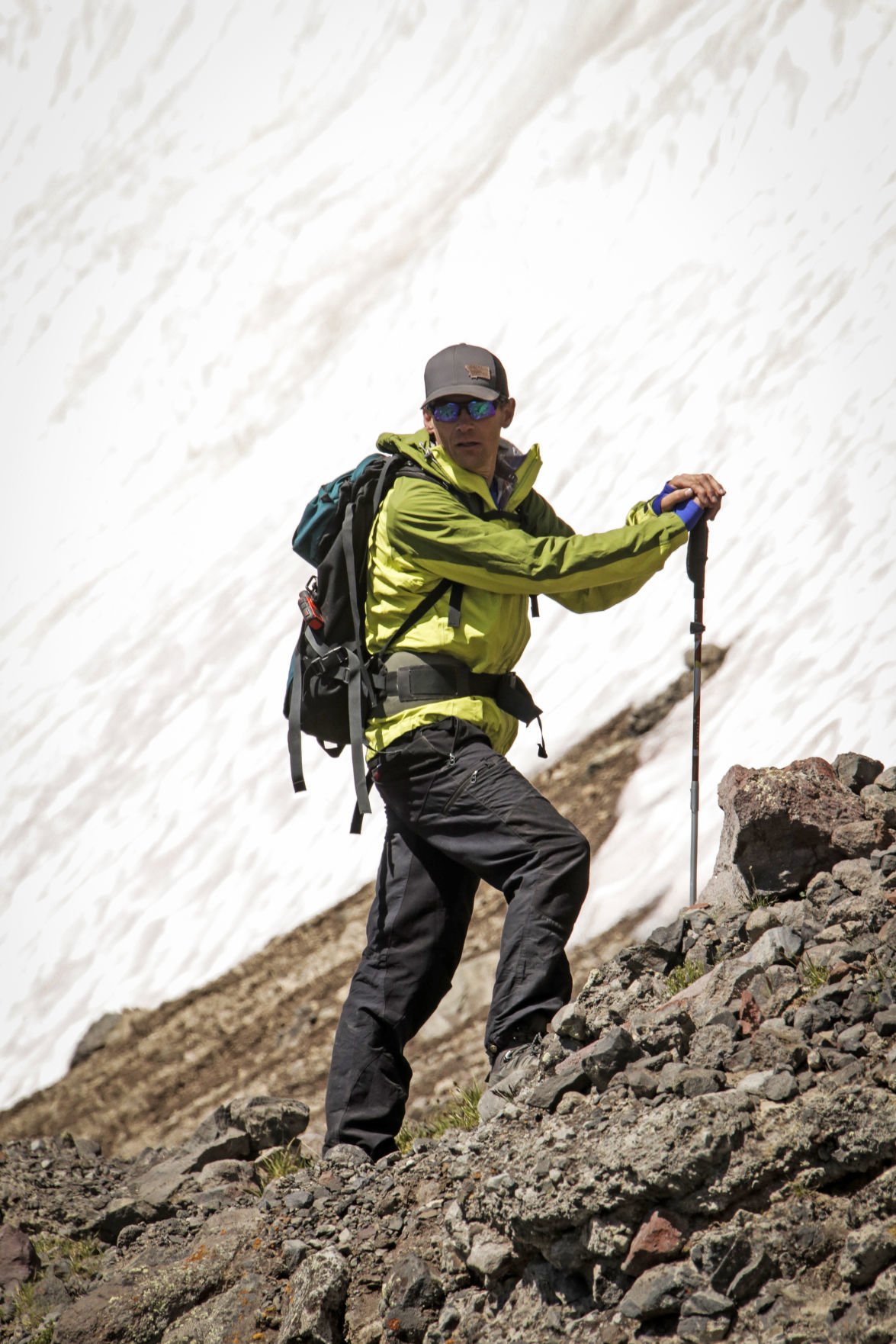 Vern Streeter takes a breather while climbing up a flank of Younts Peak. 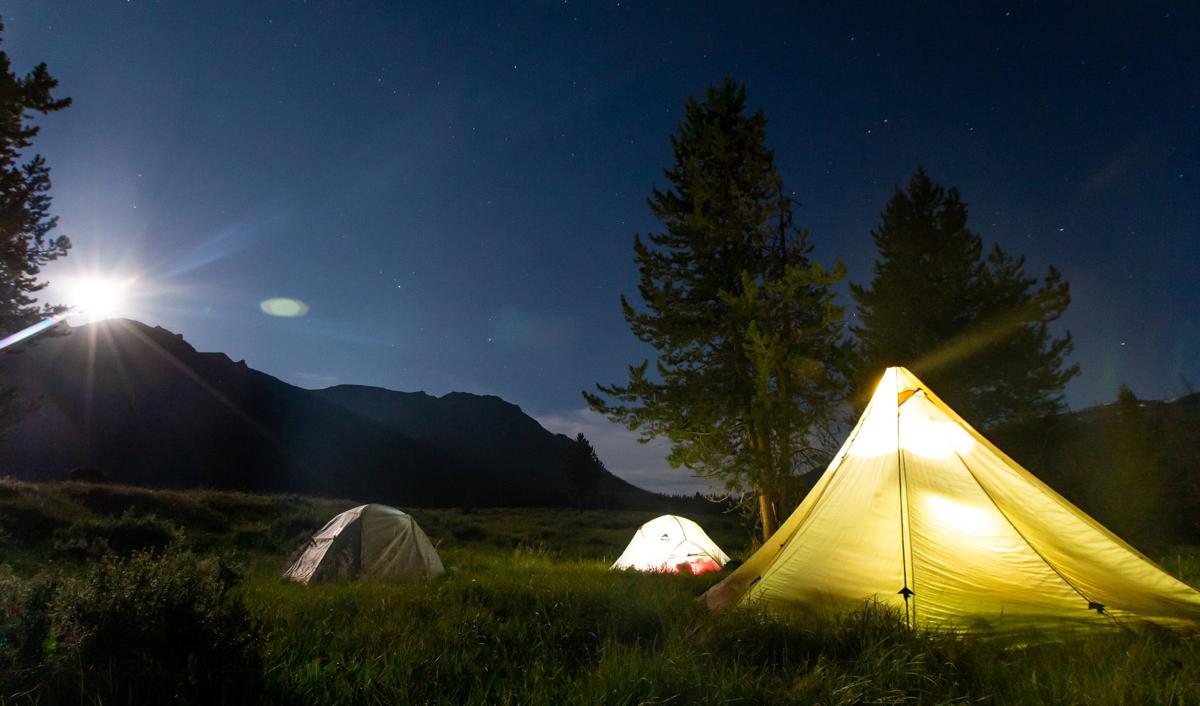 Camped below the peaks of the Teton Wilderness, the crew took five days to complete their round trip journey. 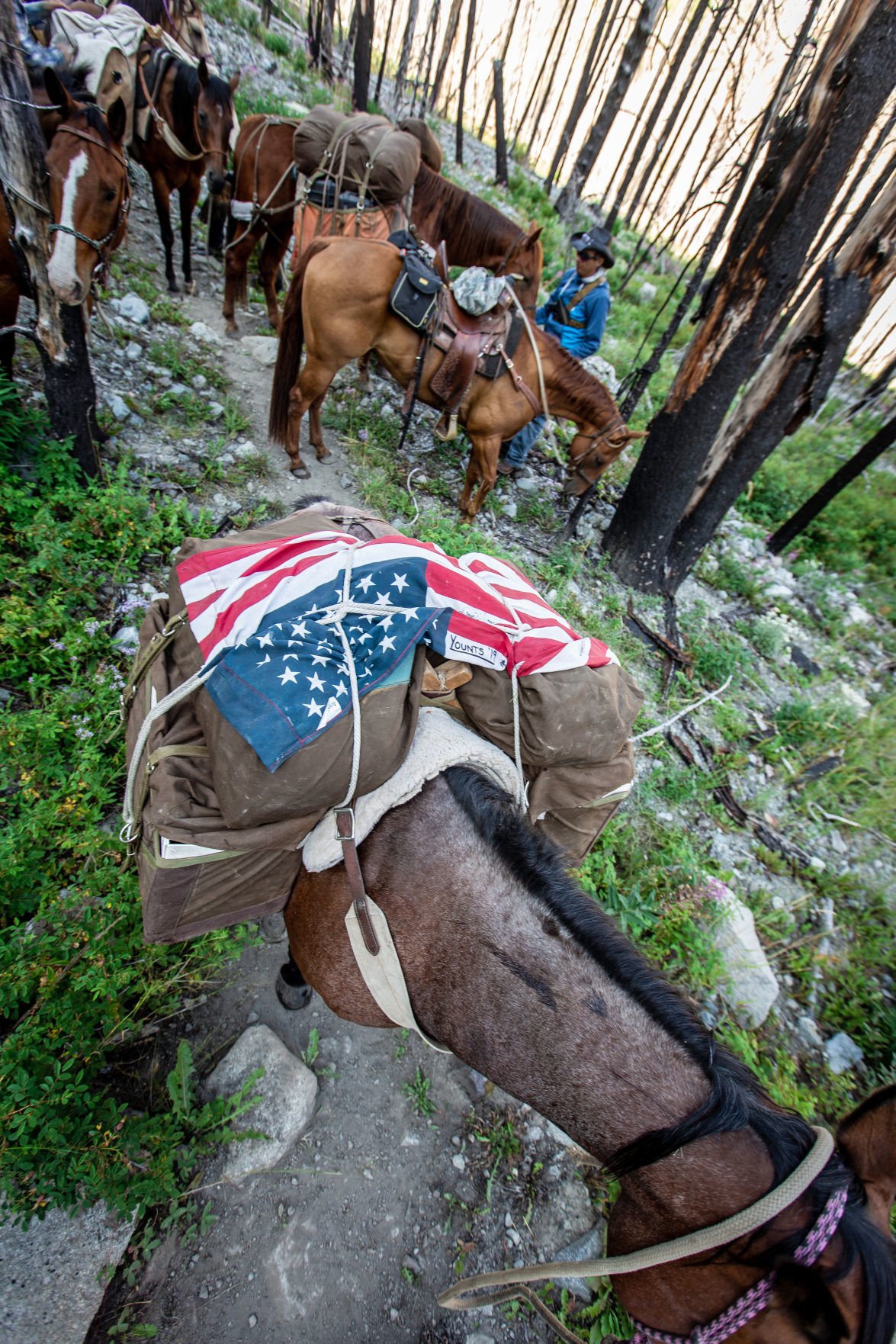 An American flag made the trip with the group, here tied down to a pack horse's load.