Black women find healing (but sometimes racism, too) in the outdoors
Share this
{{featured_button_text}}
1 of 6 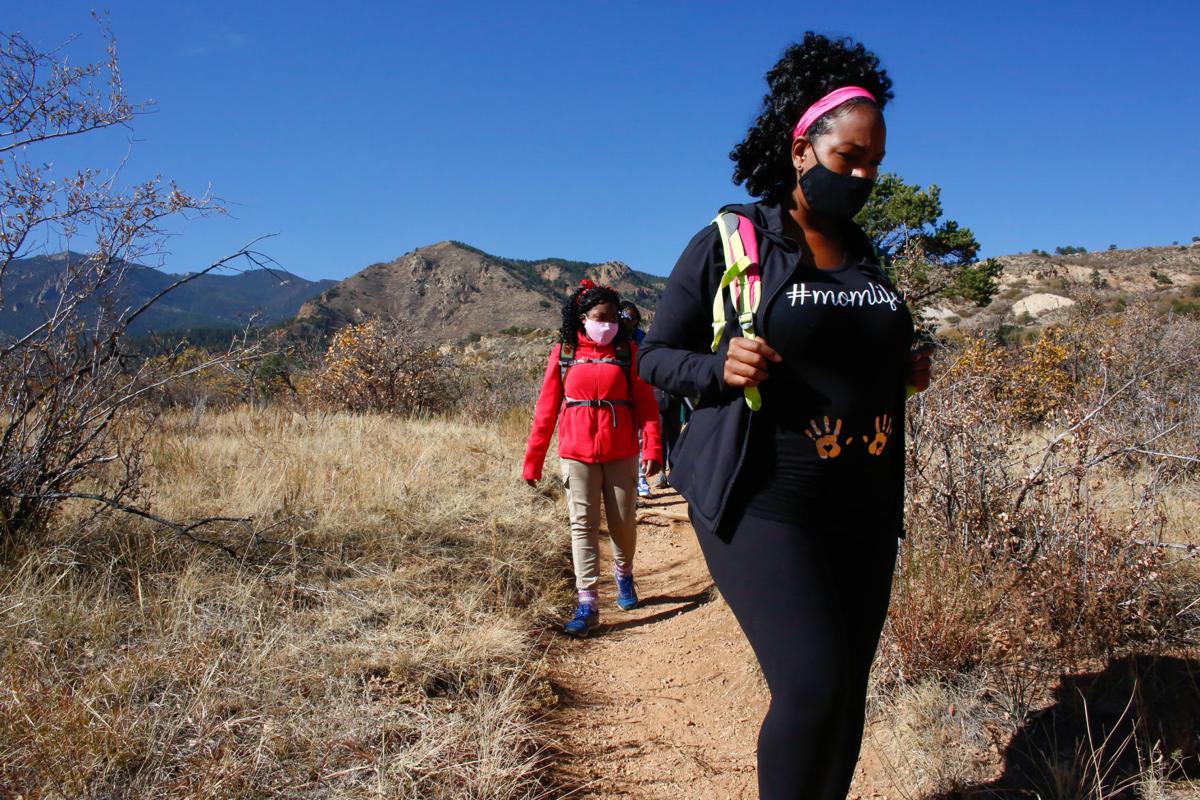 Jessica Newton,right, and her 14-year-old daughter, Joy Eloi, hike through Bear Creek Regional Park in Colorado Springs, Colorado, on Oct. 24, 2020. Newton formed an adventure group to encourage other Black women to enjoy the outdoors and it now has chapters across the U.S. and Canada. 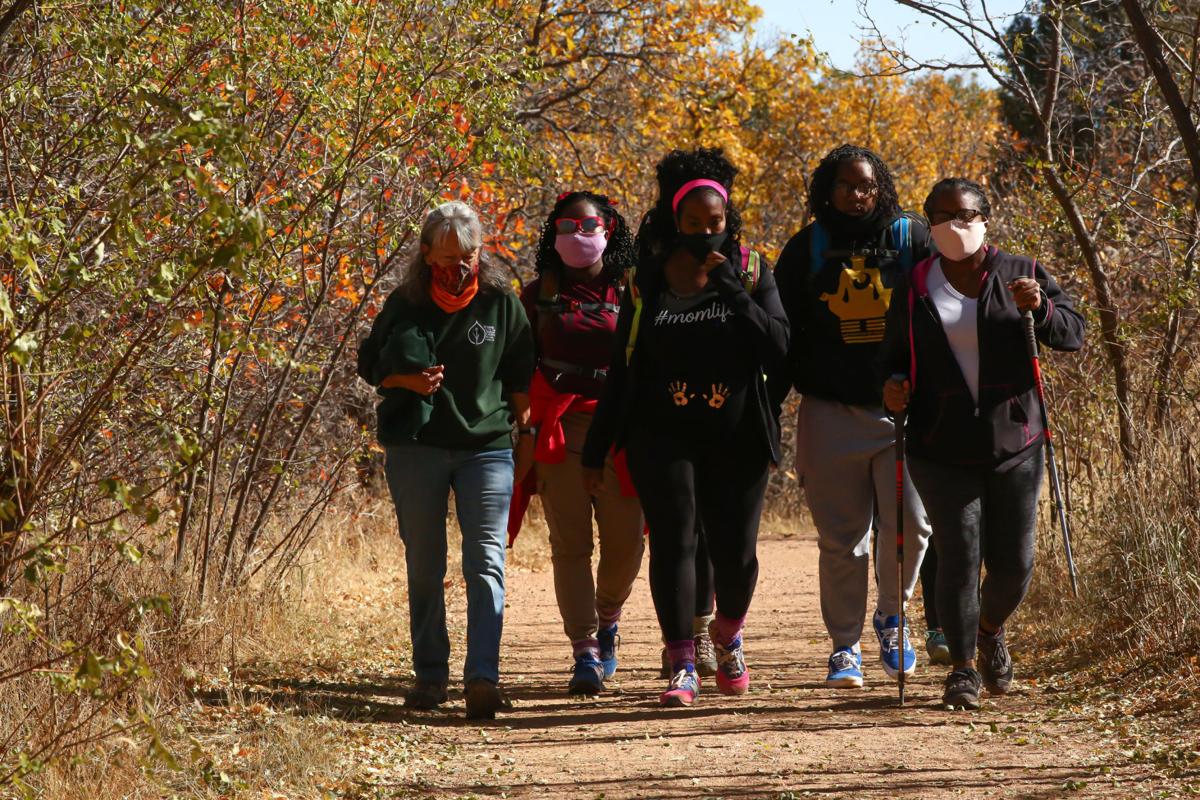 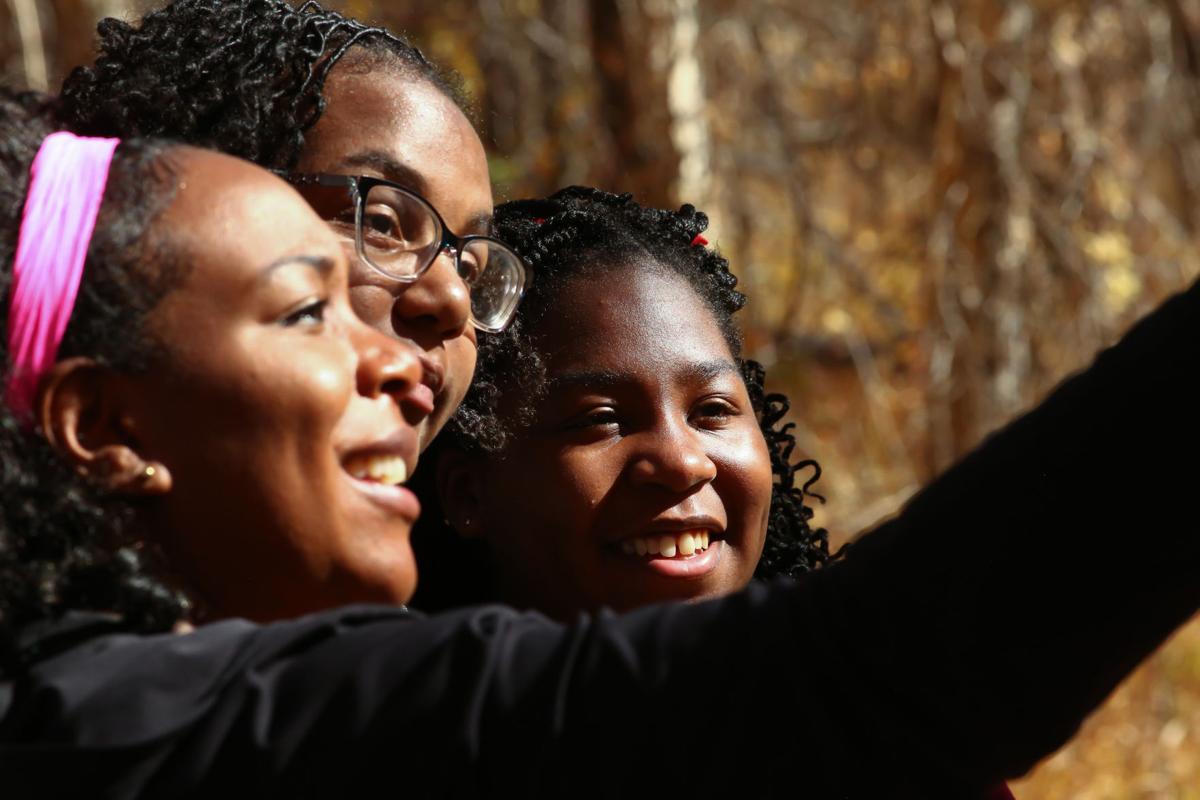 From left, Jessica Newton, her 16-year-old cousin, Jewyl Newton, and her 14-year-old daughter, Joy Eloi, stop to take a selfie on a hike through Bear Creek Regional Park in Colorado Springs, Colorado, on Oct. 24, 2020. 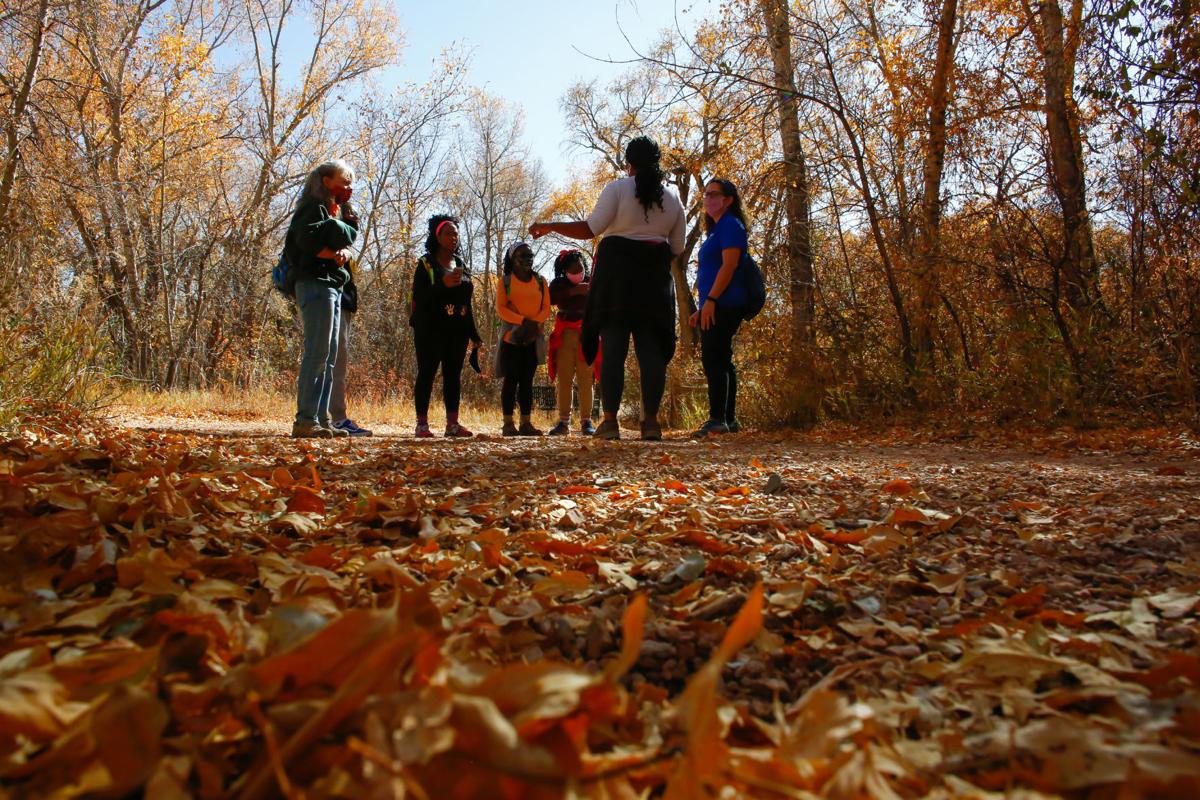 Members of Vibe Tribe Adventures pause during a hike through Bear Creek Regional Park in Colorado Springs, Colorado, on Oct. 24, 2020. 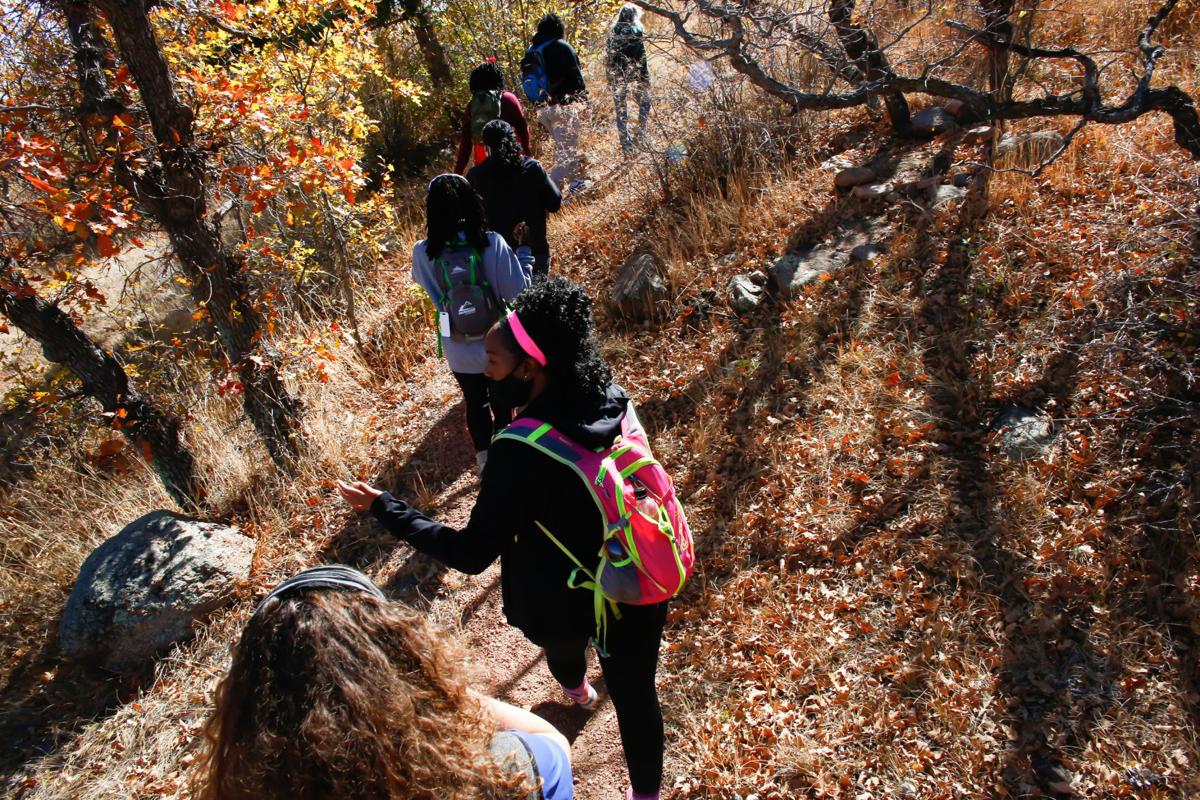 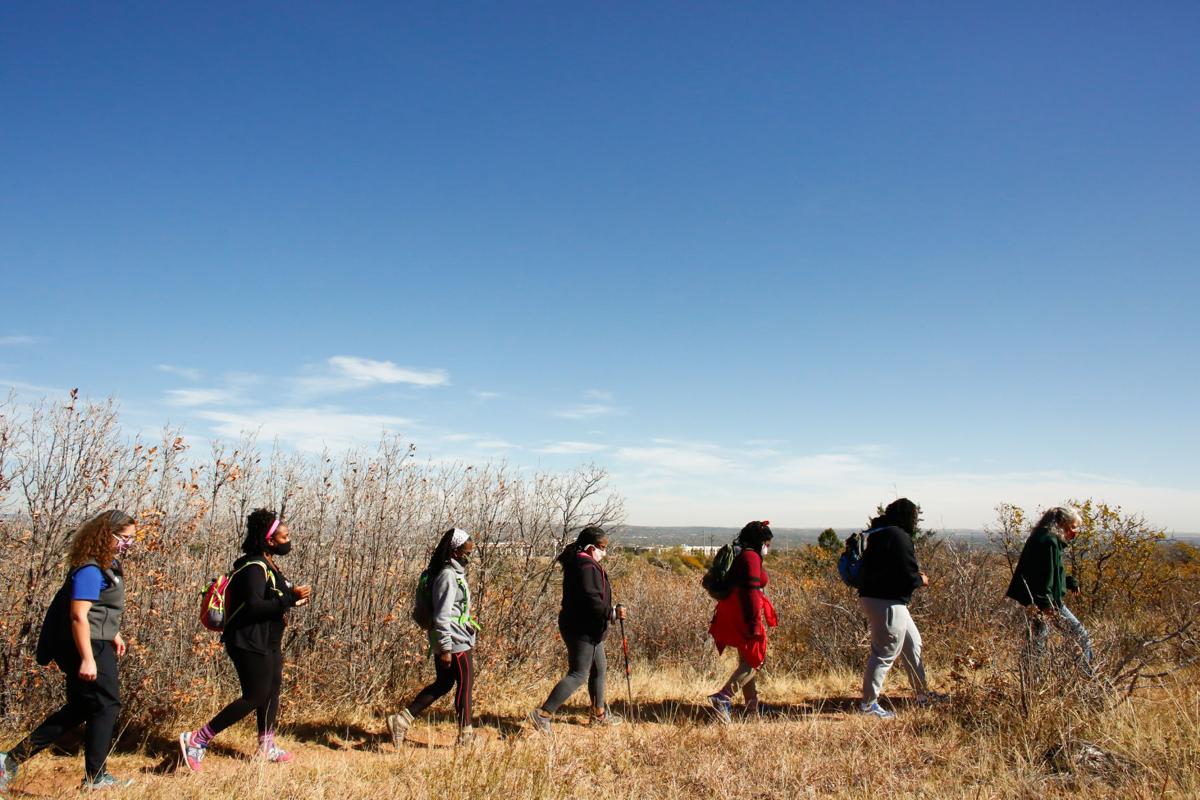 It would be the last hike of the season, Jessica Newton had excitedly posted on her social media platforms. With mild weather forecast and Colorado’s breathtaking fall foliage as a backdrop, she was convinced an excursion at Beaver Ranch Park would be the quintessential way to close out months of warm-weather hikes with her “sister friends.”

Still, when that Sunday morning in 2018 arrived, she was shocked when her usual crew of about 15 had mushroomed into about 70 Black women. There’s a first time for everything, she thought as they broke into smaller groups and headed toward the nature trail. What a sight they were, she recalled, as the women — in sneakers and hiking boots, a virtual sea of colorful headwraps, flowy braids and dreadlocks, poufy twists and long, flowy locks — trekked peacefully across the craggy terrain in the crisp mountain air.

It. Was. Perfect. Exactly what Newton had envisioned when in 2017 she founded Black Girls Hike to connect with other Black women who share her affinity for outdoor activities. She also wanted to recruit others who had yet to experience the serenity of nature, a pastime she fell for as a child attending an affluent, predominately white private school.

But their peaceful exploration of nature and casual chatter — about everything from food and family to hair care and child care — was abruptly interrupted, she said, by the ugly face of racism.

“We had the sheriff called on us, park rangers called on us,” recalled Newton, now 37, who owns a construction industry project development firm in Denver.

“This lady who was horseback riding was upset that we were hiking on her trail. She said that we’d spooked her horse,” she said of a woman in a group of white horseback riders they encountered. “It just didn’t make any sense. I felt like, it’s a horse and you have an entire mountain that you can trot through, run through, gallop through or whatever. She was just upset that we were in her space.”

Eventually, two Jefferson County sheriff’s deputies, with guns on their hips, approached, asking, “What’s going on here?” They had been contacted by rangers who’d received complaints about a large group of Black women being followed by camera drones in the park; the drones belonged to a national television news crew shooting a feature on the group. (The segment aired weeks later, but footage of the confrontation wasn’t included.)

“‘Move that mob!’” attendee Portia Prescott recalled one of the horseback riders barking.

“Why is it that a group of Black women hiking on a trail on a Sunday afternoon in Colorado is considered a ‘mob?’” Prescott asked.

A man soon arrived who identified himself as the husband of one of the white women on horseback and the manager of the park, according to the Jefferson County Sheriff’s Office incident report, and began arguing with the television producers in what one deputy described in the report as a “hostile” manner.

The leader of the horseback tour told the deputies that noise from the large group and the drones startled the horses and that when she complained to the news crew, they told her to deal with it herself, the report said. The news crew told deputies that the group members felt insulted by the horseback riders use of the term “mob.” The woman leading the horseback riders, identified in the incident report as Marie Elliott, said that she did not remember calling the group a mob, but she told the officers she “would have said the same thing if the group had been a large group of Girl Scouts.”

In the end, Newton and her fellow hikers were warned for failing to secure a permit for the group. Newton said she regrets putting members in a distressing — and potentially life-threatening — situation by unknowingly breaking a park rule. However, she suspects that a similarly sized hiking group of white women would not have been confronted so aggressively.

“You should be excited that we are bringing more people to use your parks,” added Newton. “Instead, we got slammed with [threats of] violations and ‘Who are you?’ and ‘Please, get your people and get out of here.’ It’s just crazy.”

Mike Taplin, spokesperson for the Jefferson County Sheriff’s Office, confirmed that no citations were issued. The deputies “positively engaged with everyone, with the goal of preserving the peace,” he said.

Newton said the “frustrating” incident has reminded her why her group, which she has revamped and renamed Vibe Tribe Adventures, is so needed in the white-dominated outdoor enthusiasts’ arena.

With the tagline “Find your tribe,” the group aims to create a sisterhood for Black women “on the trails, on waterways and in our local communities across the globe.” Last summer, she secured nonprofit status and expanded Vibe Tribe’s focus, adding snowshoeing, fly-fishing, zip lining and kayaking to its roster. Today, the Denver-based group has 11 chapters across the U.S. (even Guam) and Canada, with about 2,100 members.

Research suggests her work is needed. The most recent National Park Service survey found that 6% of visitors are Black, compared with 77% white. Newton said that must change — especially given the opportunities parks provide and the health challenges that disproportionately plague Black women. Research shows they experience higher rates of chronic preventable health conditions, including diabetes, hypertension and cardiovascular disease. A 2020 study found that racial discrimination also may increase stress, lead to health problems and reduce cognitive functioning in Black women. Newton said it underscores the need for stress-relieving activities.

“It’s been studied at several colleges that if you are outdoors for at least five minutes, it literally brings your stress level down significantly,” said Newton. “Being around nature, it’s like grounding yourself. That is vital.”

Newton said participation in the group generally tapers off in winter. She is hopeful, though, that cabin fever from the pandemic will inspire more Black women to try winter activities.

Atlanta member Stormy Bradley, 49, said the group has added value to her life. “I am a happier and healthier person because I get to do what I love,” said the sixth grade teacher. “The most surprising thing is the sisterhood we experience on and off the trails.”

Patricia Cameron, a Black woman living in Colorado Springs, drew headlines this summer when she hiked 486 miles — from Denver to Durango — and blogged about her experience to draw attention to diversity in the outdoors. She founded the Colorado nonprofit Blackpackers in 2019.

“One thing I caught people saying a lot of is ‘Well, nature is free’ and ‘Nature isn’t racist’ — and there’s two things wrong with that,” said Cameron, a 37-year-old single mother of a preteen.

“Nature and outside can be free, yes, but what about transportation? How do you get to certain outdoor environments? Do you have the gear to enjoy the outdoors, especially in Colorado, where we’re very gear-conscious and very label-conscious?” she asked. “Nature isn’t going to call me the N-word, but the people outside might.”

Cameron applauds Newton’s efforts and those of other groups nationwide, like Nature Gurlz, Outdoor Afro, Diversify Outdoors, Black Outdoors, Soul Trak Outdoors, Melanin Base Camp and Black Girls Run, that have a similar mission. Cameron said it also was encouraging that the Outdoor Industry Association, a trade group, pledged in the wake of the racial unrest sparked by George Floyd’s death to help address a “long history of systemic racism and injustice” in the outdoors.

Efforts to draw more Black people, especially women, outdoors, Cameron said, must include addressing barriers, like cost. For example, Blackpackers provides a “gear locker” to help members use pricey outdoor gear free or at discounted rates. She has also partnered with businesses and organizations that subsidize and sponsor outdoor excursions. During the pandemic, Vibe Tribe has waived all membership fees through this month.

Cameron said she dreams of a day when Black people are free from the pressures of carrying the nation’s racial baggage when participating in outdoor activities.

Vibe Tribe member and longtime outdoor enthusiast Jan Garduno, 52, of Aurora, Colorado, agreed that fear and safety are pressing concerns. For example, leading up to the presidential election she changed out of her “Let My People Vote” T-shirt before heading out on a solo walk for fear of how other hikers might react.

Groups like Vibe Tribe, she said, provide camaraderie and an increased sense of safety. And another plus? The health benefits can also be transformative.

“I’ve been able to lose about 40 pounds and I’ve kept it off,” explained Garduno.

Kaiser Health News (KHN) is a national health policy news service. It is an editorially independent program of the Henry J. Kaiser Family Foundation which is not affiliated with Kaiser Permanente.

Zach Turnbull could barely make out the emaciated grizzly bear’s inside-lip tattoo, and when he did decipher the digits — 168 — they just didn’t seem right.

A Montana appliance store owner has been arrested and faces federal felony charges for his alleged participation in the breach of the U.S. Capitol while Congress was certifying the Electoral College vote.

A Rexford man who was ice fishing drowned in Fort Peck Lake after the vehicle he was driving crashed through the ice north of Winnett, officials said.

The U.S. Marshals Service Montana Violent Offender Task Force is asking people to be on the lookout for a man wanted for multiple felony warra…

Word that Joe Biden might cancel the Keystone XL pipeline permit this week evoked quick a response from Montanans who have fought for years over the Canadian tar sands project.

A Dillon man is on a federal hold at the Missoula County Detention Facility in relation to his entering the U.S. Capitol illegally on Jan. 6, according to reporting by the Dillon Tribune.

Montana currently has 4,583 active cases of COVID-19, and 37 more of its residents have died due to the virus.

More than 400 medical professionals, 150 business leaders and 43 members of religious clergy in Montana have signed letters opposing both laws, as well as major hospital systems.

Republican Christi Jacobson, elected to the Montana Secretary of State's Office in November, said Friday she considered HB 176 to be "very important legislation."

Jessica Newton,right, and her 14-year-old daughter, Joy Eloi, hike through Bear Creek Regional Park in Colorado Springs, Colorado, on Oct. 24, 2020. Newton formed an adventure group to encourage other Black women to enjoy the outdoors and it now has chapters across the U.S. and Canada.

From left, Jessica Newton, her 16-year-old cousin, Jewyl Newton, and her 14-year-old daughter, Joy Eloi, stop to take a selfie on a hike through Bear Creek Regional Park in Colorado Springs, Colorado, on Oct. 24, 2020.

Members of Vibe Tribe Adventures pause during a hike through Bear Creek Regional Park in Colorado Springs, Colorado, on Oct. 24, 2020.