ABSAROKEE – As veteran boaters have returned to explore the Stillwater River following historic June flooding, they’ve been amazed at what they are finding.

“I’ve never seen a river change like that,” said Ron Lodders, a Billings kayaker who has been running the Stillwater for 40 years. “It’s just really dramatic.”

The high water relocated boulders, uprooted trees, scoured channels and filled in one famous wave caused by a rock ledge named Beartooth Drop, a rapid known for either toppling unwary or inexperienced boaters or pushing them into a midstream bridge abutment.

Waves above the Beartooth Drop were estimated at 12-feet high, even after the river's water level receded, according to Marek Rosin, owner of Adventure Whitewater, located on the banks of the river just north of Absarokee.

“It’s almost inconceivable how violent the flood was,” Rosin said.

It’s hard to imagine, looking at the cool green pools of the Stillwater River on the first day of August, that only seven weeks ago the stream was 20 times larger. At the peak of flooding, the U.S. Geological Survey estimated the popular south-central Montana stream was running at 24,000 cubic feet per second.

During the torrential event, river guide Grayson Lowe saw an entire staircase bobbing down the stream.

A hot tub, bedroom furniture, a large propane tank and an entire deck are just some of the unusual items rafting guides, kayakers and floaters have spotted along the shores or stuffed into brush on the river as the water has receded.

“Everything is different, which is good and bad,” Rosin said as he walked from his business to the river shore next door. “There used to be a rock bigger than a Volkswagen right there,” he said pointing to a large gravel bar. “We don’t know where it went.”

The gravel bar did not exist before the flood, leaving the business’ riverside launch rocked in.

When Rosin and his crew went to evacuate gear at the height of flooding from the old barn they use for storage, rafts floated out the door.

At his Red Lodge home, where Rock Creek inundated parts of the community, the sound of boulders and rocks being pushed downstream echoed for blocks, he said.

“It was the eeriest, most frightful sound,” Rosin said.

Eric Dye, a veteran guide at Absaroka Whitewater Adventures in Absarokee, compared the noise of tumbling Stillwater River rocks to a “constant thunder.”

In addition to destroying roads, bridges and homes, the high water caused by rain on mountain snow has shortened the normally busy summer season for rafting guides on the Stillwater. News of the flooding – and related road and trail closures in Yellowstone National Park, the Beartooth Highway (now repaired and reopened) and on trails in the Beartooth Ranger District – may be keeping some tourists away, reducing business further.

“We were shut down for about two-and-a-half weeks” due to high water after the Montana Department of Fish, Wildlife & Parks closed the river to all recreation, Dye said. “As soon as people heard the news about the flood, they went somewhere else. It’s definitely been a slower year.”

Business at the two Stillwater River rafting companies is down about 60% from last year, which set records as COVID refugees sought outdoor experiences, and as airline and international travel was restricted.

The flood also carved the main channel of the Stillwater River deeper in many places, allowing boaters to run at flows lower than normal. With the river at about 1,000 cfs on Monday, the two outfitters were still guiding trips on the lower portion of the river onto its junction with the Yellowstone River, continuing downstream to the community of Columbus before taking out.

In previous years, they would have to be off the river when it was around 1,200 to 1,400 cfs. Last year, that occurred by mid-July.

Water is also being released from Mystic Dam on West Rosebud Creek, a lake that climbed 32 feet in three days during the peak of the flooding. That has helped keep the water cool and the flows a bit higher.

Rosin said in the middle section of the river, from Cliff Swallow fishing access site down to Jeffrey’s Landing, the flooding “cleared out a lot of the junk.”

The wave train above Beartooth Drop has become a favorite new play area for adventurous kayakers and rafters.

“From Whitebird (fishing access site) down past Mad Max, there’s just a wave train everywhere,” Lodders said with a wide grin. “Even now with lower flows, for boaters who like to play, this is the place to come.”

Dye said when the river was running at 3,000 cfs the lower Stillwater was “monstrous.”

Below Mad Max, a hole known as Nemesis trapped one cataraft for 28 minutes as the boat circulated around and around, the oarsman unable to row out of the swirling pool. A cataraft has two inflatable pontoons joined by a rowing frame.

On the upper Stillwater, low bridges that made floating at flows above 5,200 cfs dangerous, were washed out in the flood.

With the temperature climbing toward 100 degrees on Monday, Lodders and his wife, Carla, and their dog River were anxious to paddle the river’s refreshing water. Business is up at the rafting outfitters as the recent heat wave continues and people seek a fun way to cool off.

Rosin, always the optimist, stressed the positive side of the changes.

Guide Roy Peck agreed. “If you’re not having fun, you’re not doing it right.”

High water prompted some riverside homeowners in Carbon, Stillwater and Yellowstone counties to dump truckloads of rock around their houses in an attempt to protect their investments.

As a result, there are 127 spots along waterways in the counties that now have to be reviewed to see if the rockwork can stay or has to be altered.

Montana Fish, Wildlife & Parks fisheries biologist Bryan Giordano said he’s spent a lot of time since the mid-June flooding reviewing the rip-rapped banks to see if they will have long-term effects on the waterways, neighbors and the land.

FWP is working with the Montana Department of Natural Resources and Conservation, and the area’s conservation districts, to assess the streambanks.

Twenty-three vehicles were helicoptered from East Rosebud Lake on July 21, an area where they were trapped when flooding in mid-June destroyed the only road in.

The flooding resulted in significant damage to the clinic’s equine breeding program located roughly 12 feet behind the main clinic. Horse stables, corrals and pens were lost or severely damaged. Much of the land is still covered in water or debris.

‘The rack of this tough world:’ Shakespearean tragedy brings healing to tiny Fishtail

200 people gathered in the flood-stricken community of Fishtail to watch Montana Shakespeare in the Parks' performance of "King Lear," a stark reminder of public art's healing powers.

Damage to the Custer Gallatin National Forest from floods in mid-June — especially in the Beartooth Ranger District — has restricted access to trails, damaged roads and restricted where campers and hikers can go in the popular region of south-central Montana.

Temporary road access to the Beartooth Mountain community of Alpine next to East Rosebud Lake won't be restored by this fall, according to the Custer Gallatin National Forest.

Study: The Megalodon could have eaten whole whales in just a couple of bites

Why Prince William is heading to the United States

Why Prince William is heading to the United States

Could life on Earth survive if there were more moons in the sky?

Could life on Earth survive if there were more moons in the sky? 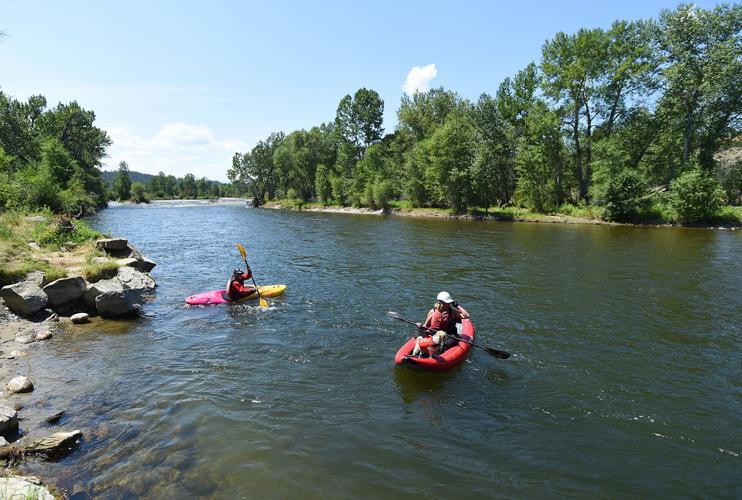 Ron and Carla Lodders start a trip down the Stillwater River on Monday. Channels and rapids have changed since the June flood. 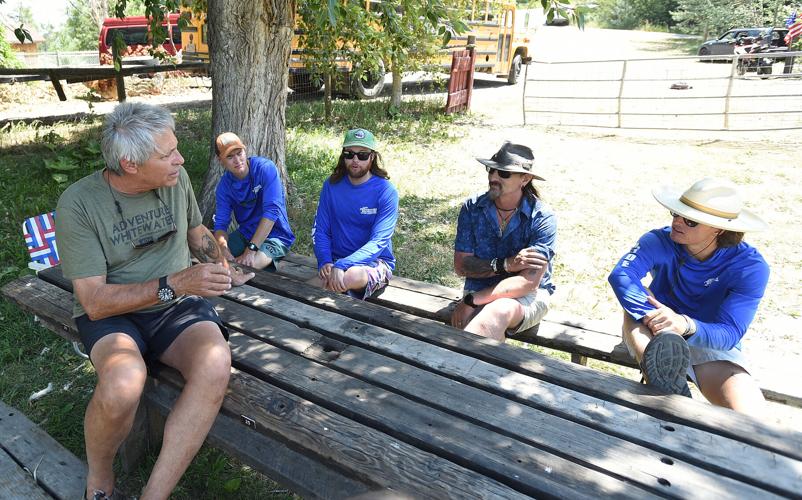 Marek Rosin, left, of Adventure Whitewater in Absarokee and river guides Brendan Lahr, Dante Lemire, Roy Pack and Grayson Lowe talk about flooding on the Stillwater River in June. Channels and rapids have changed since the historic flood. 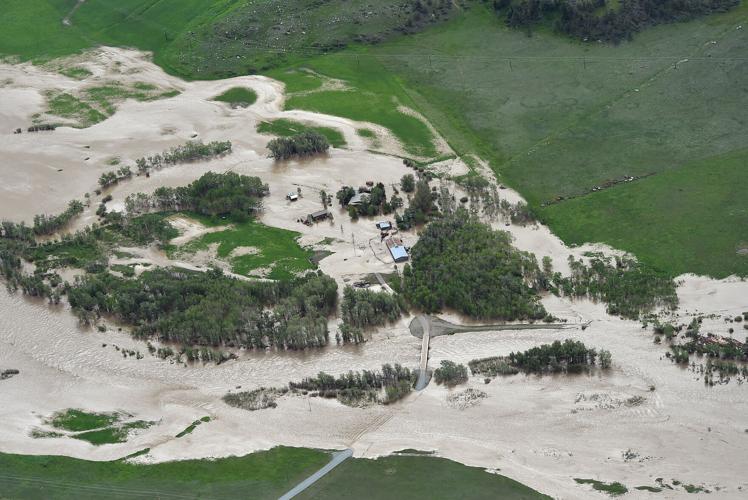 Historic flooding damages roads and bridges and floods homes along the Stillwater River on June 13.