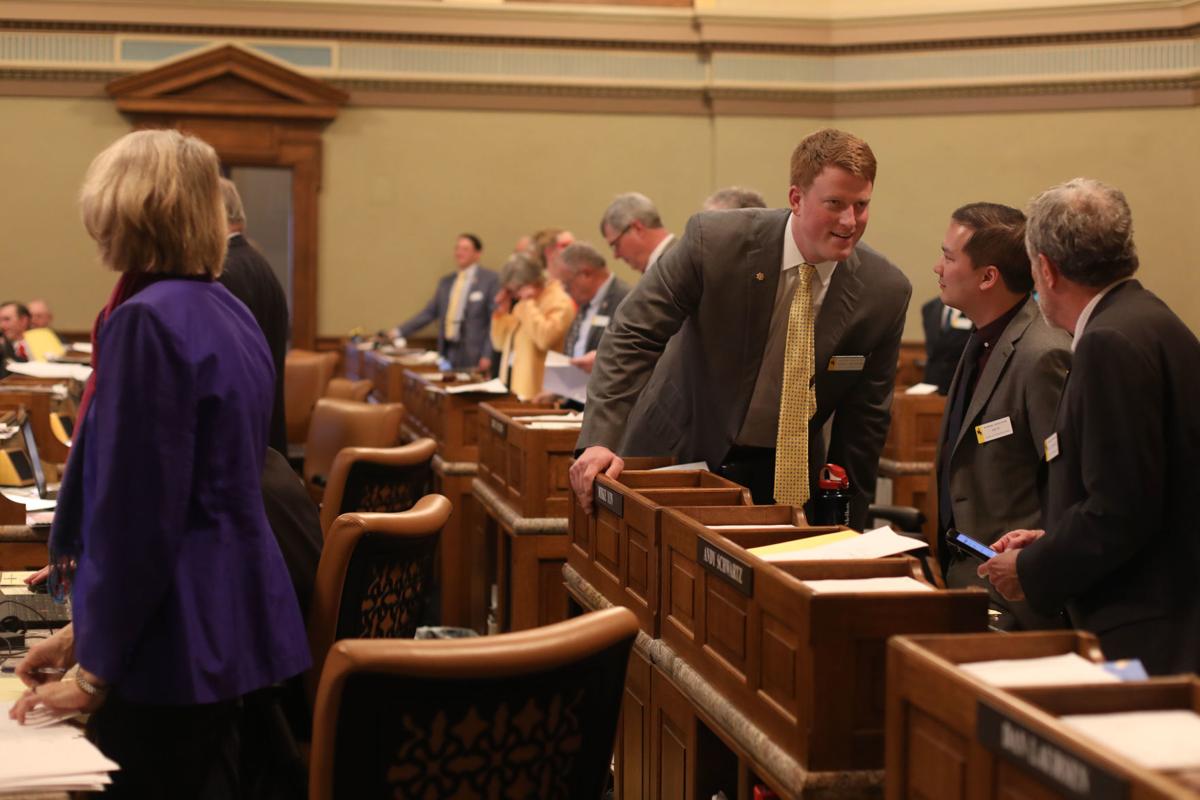 Rep. Cyrus Western talks with Teton County Reps. Mike Yin and Andy Schwartz in between votes in February 2020 at the Wyoming Capitol. A civil rights group is calling on Western to resign because of a tweet he made in reference to Wyoming's first Black sheriff. 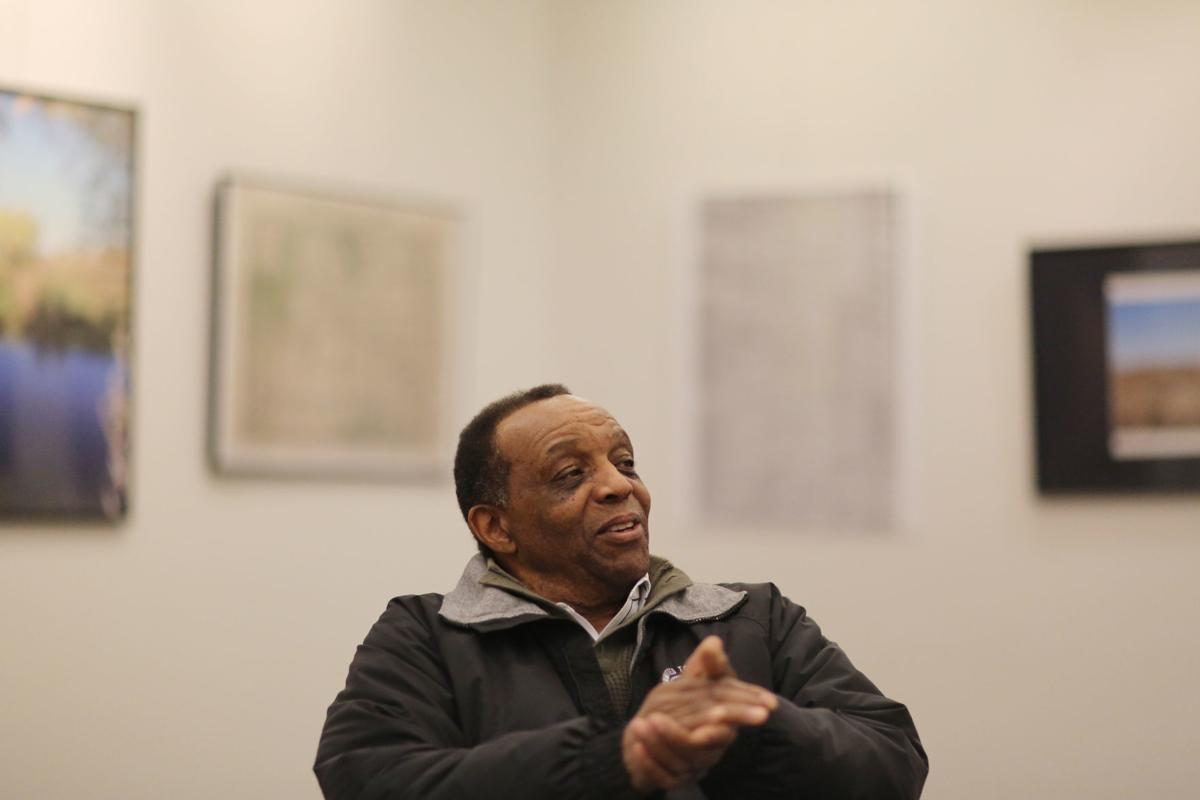 Jimmy Simmons, vice president of the Pikes Peak Southern Christian Leadership Conference, sits in the gallery room of the Trails Center in February 2018. The conference is calling on Rep. Cyrus Western to resign because of a tweet he made in reference to Wyoming's first Black sheriff.

A regional civil rights group is calling on a Sheridan lawmaker to resign after he tweeted a “Where the white women at?” meme in reference to the appointment of Wyoming’s first Black sheriff.

“It is our conviction and on this platform as a Civil Rights organization, without reservation, that we move towards the abolishment of such discriminatory acts and behaviors and seek your resignation as State Representative,” reads the letter, which is dated April 8. “Although these behaviors may have been previously tolerated, they are neither acceptable nor welcomed. Reaching back to the words of Thomas Jefferson, let us, as individuals and advocates of human dignity, lead the way to our ‘human unalienable rights that all men are created equal.’”

The letter is signed by conference President Henry L. Allen, Vice President Jimmy Simmons and Chief-of-Staff Nathaniel Granger Jr. Simmons, the former president of the Casper NAACP, provided a copy of the letter to the Star-Tribune on Monday.

Western said Monday he does not plan to resign.

“I’m going to let the voters have the final say on this one,” he said. He is up for reelection next year.

Western tweeted the meme days after Albany County Sheriff Aaron Appelhans became the first Black man to be given that title in Wyoming. In “Blazing Saddles,” character Sheriff Bart, played by Black actor Cleavon Little, makes the comment that Western shared in an attempt to anger members of the Ku Klux Klan. Last year, streaming service HBO Max added a content warning to the 1974 film, emphasizing that the movie’s racist language and stereotypes are meant to lampoon bigotry.

The civil rights group’s letter comes more than four months after Western shared the post, which he then deleted.

“Please accept our apology for this late but urgent response to such a critical matter,” the letter begins.

Western apologized in December for the tweet and spoke with Appelhans.

“I’d like to issue a retraction,” Western tweeted then. “My remark about the new Albany Sheriff was dumb and uncalled for. ... What I did was insensitive, and, while unintended, I recognize that it was wrong. I hope he accepts my apology.”

He said Monday he did not have anything to add to his previous apology.

The Pikes Peak Southern Christian Leadership Conference acknowledged Western’s apology: “Mr. Cyrus Western, we took into account the fact that you apologized to the newly appointed Albany County Sherriff (sic) Aaron Appelhans for your untimely and distasteful tweet in December, 2020, where instead of celebrating his appointment as Wyoming’s first Black Sheriff you used your position to demoralize him. As a State Representative, you are aware this demoralization did not only represent a personal attack on Aaron Appelhans, but also the privilege of being a White male in America and the associative implicit bias towards people of color to the extent of misuse of of that privilege as well as Representative in the form of a tweeted microaggression.”

Last summer, as protesters gathered around the country in response to the police killing of George Floyd, demonstrators in Casper discussed starting a new anti-racism organization. (The city’s NAACP chapter is now defunct.)

Simmons said last month that there are now 70 Casperites involved in a Pikes Peak Southern Christian Leadership Conference group here but that an official chapter has not yet formed, in part because of the pandemic.

Smoke from a controlled burn along Interstate 15 in northern Montana obscured the vision of drivers, leading to a chain reaction crash that killed two people and injured four others.

A 39-year-old woman was found dead in southwestern Colorado after an apparent bear attack, state Parks and Wildlife officials said. The female bear and two yearling cubs were euthanized.

The Big Horn County coroner is denying a felony theft charge in Yellowstone County that accuses him of accepting stolen dirt bikes and a stolen ATV.

Montana added 232 new cases of COVID-19 on Tuesday, and the virus has killed three more residents.

One of the biggest points of contention is a provision that reduces the amount of matching money for municipalities that still have more restrictive public health mandates than the state's.

Rep. Cyrus Western talks with Teton County Reps. Mike Yin and Andy Schwartz in between votes in February 2020 at the Wyoming Capitol. A civil rights group is calling on Western to resign because of a tweet he made in reference to Wyoming's first Black sheriff.

Jimmy Simmons, vice president of the Pikes Peak Southern Christian Leadership Conference, sits in the gallery room of the Trails Center in February 2018. The conference is calling on Rep. Cyrus Western to resign because of a tweet he made in reference to Wyoming's first Black sheriff.