Add whitetail deer to the list of animals that can contract and carry COVID-19.

A recently released Iowa study found about one-third of 280 captive and free-ranging deer had tested positive for the infection, raising concerns about deer being a reservoir for the virus to mutate. An estimated 30 million whitetail deer live in the United States.

"What's the highlight of this research is that this is a free-ranging animal we don't have reason to suspect has any intimate human contact," Rachel Ruden, a coauthor of the paper and member of the Iowa State College of Veterinary Medicine, told the Duluth News Tribune. "But they're still getting this infection."

Prior to the release of the study, in early August the U.S. Department of Agriculture’s Animal Plant Health Inspection Service published information showing COVID-19 antibodies in 33% of 481 samples collected from deer in Illinois, Michigan, New York and Pennsylvania. The presence of antibodies means the animals had been exposed to the virus but not necessarily infected.

“We do not know how the deer were exposed to SARSCoV-2,” APHIS wrote in its report. “It’s possible they were exposed through people, the environment, other deer, or another animal species.”

Then in late August APHIS confirmed COVID-19 in wild whitetails in Ohio, “the first deer confirmed with the SARS-CoV-2 virus worldwide,” the agency wrote on its website.

Jennifer Ramsey, wildlife veterinarian for Montana Fish, Wildlife & Parks, called the recent research concerning “because there’s a lot of uncertainty about how deer are getting exposed, and what this will mean for wildlife and humans over time.”

Earlier research has revealed that other animals — including cats, dogs, otters and lions held in captivity — have tested positive for the virus. In the U.S. alone, the coronavirus is responsible for the deaths of 750,000 people. Worldwide, 5 million people have died from COVID-19 infections.

APHIS, which also monitors diseases like brucellosis found in bison and elk in the Greater Yellowstone Ecosystem, said there is “no evidence that animals, including deer, are playing a significant role in the spread of SARS-CoV-2 to people,” calling the risk low.

Still, as with other wildlife diseases like brucellosis and chronic wasting disease, hunters are advised to be careful when butchering, gutting or hauling an animal they’ve killed. Wearing latex gloves is advised and properly disposing of any waste material.

In the instance of an animal testing positive for CWD, hunters are advised not to eat the meat. No such warning is being given for consuming an animal that tests positive for COVID-19 in Iowa, although testing for the virus has only been conducted as part of the recent research.

“… So we have an archive of lymph nodes from 2019-present, and will continue to collect more throughout this season,” Ramsey noted. “Those archived samples could potentially be used for Covid research. The good thing is we have samples collected from both pre and post pandemic.”

She’s communicated with scientists at USDA, who conducted the earlier work, to see if they wanted additional samples. Although interested, there is no plan yet in place for testing wildlife for COVID-19 across the United States, Ramsey added.

“We will be collecting serum samples from live animals captured this winter and banking those in a serum archive assuming they can probably be used at some point for antibody testing if needed,” she said.

The news about coronavirus infections in deer comes as states are already struggling to find funding to help fight, study and monitor chronic wasting disease.

“Chronic wasting disease is one of the greatest threats facing deer, elk, and moose populations across the country, jeopardizing hunting opportunities, ecosystems, and our nation’s outdoor economy,” Mike Leahy, director for wildlife, hunting, and fishing policy for the National Wildlife Federation, said in a press release.

Recently introduced legislation, the Chronic Wasting Disease Research and Management Act, would help fund research that has so far been piecemeal. The bill would allocate $35 million each to research and management efforts and requires 75% of the management funding be directed to state and tribal wildlife agencies, according to the Boone and Crockett Club. The research could include the development of live animal or environmental testing and ways to decontaminate infectious prions, the misfolded proteins that cause the disease.

“Chronic wasting disease is a significant threat to many of our country’s native big game species, a challenge that affects both future hunting opportunity and the health of these ecologically important wildlife species,” said James Arnold, president of the Boone and Crockett Club, in a press release.

So far CWD has spread to 26 states and three Canadian provinces, as well as Sweden, Norway, Finland and South Korea.

Even without congressional funding, recent advances are being made in CWD research.

A study at the National Institute of Allergy and Infectious Diseases in Hamilton identified a field test for live deer to detect CWD. This is important since the disease can take up to two years before an animal shows symptoms or dies. Using similar technology, the University of Minnesota has developed a test to identify CWD in cuts of meat from infected deer.

Montana and Wyoming hunters are encouraged to submit the heads from any deer, elk and moose they kill during hunting season to state wildlife agencies for free CWD testing. A list of sampling stations can be found online and include game check stations in both states.

Montana and Wyoming hunters can also take the samples themselves (directions can be found online), fill out the hunter submission form available on FWP’s or Wyoming Game and Fish Department’s website and mail the samples in.

Results will take two weeks in Montana, three weeks in Wyoming, although the processing there can be sped up with a $30 fee.

Research shows scavengers play an important role in reducing the spread of disease in the wild by consuming infected material.

It’s been more than a year since the Wyoming Game and Fish Department finalized its Chronic Wasting Disease (CWD) Management Plan. As the pathogen continues creeping westward, wildlife officials warn that mitigation will happen gradually, too.

Idaho bowhunter Raymond Jones went missing on his son's 12th birthday, Sept. 7, 1968. Fifty-three years later, Jones' body was found by another bowhunter, solving a mystery that had long haunted his relatives, including his only son.

Campbell County jail inmate Juan Guajardo Jr.'s joy comes from seeing other people smile at the various projects he’s made, including a birdhouse, a wishing well and a picnic table.

JACKSON, Wyo. — There weren’t many kids in the southern Florida neighborhood where Paul Bruun grew up, so about all he did was go fish.

A total of 398 bison were sold Saturday at this year's auction.

A composting plant that diverted thousands of tons of trash in Yellowstone National Park away from a landfill every year is shutting down.

University of Montana, MonTEC get $850K to support Indigenous entrepreneurs

The grant will allow MonTEC to collaborate with Salish Kootenai College and Blackfeet Community College to develop programming online in a wide array of subjects to support female entrepreneurs.

Chronic wasting disease was recently detected in a mule deer buck that was euthanized within Baker city limits by Montana Fish, Wildlife &… 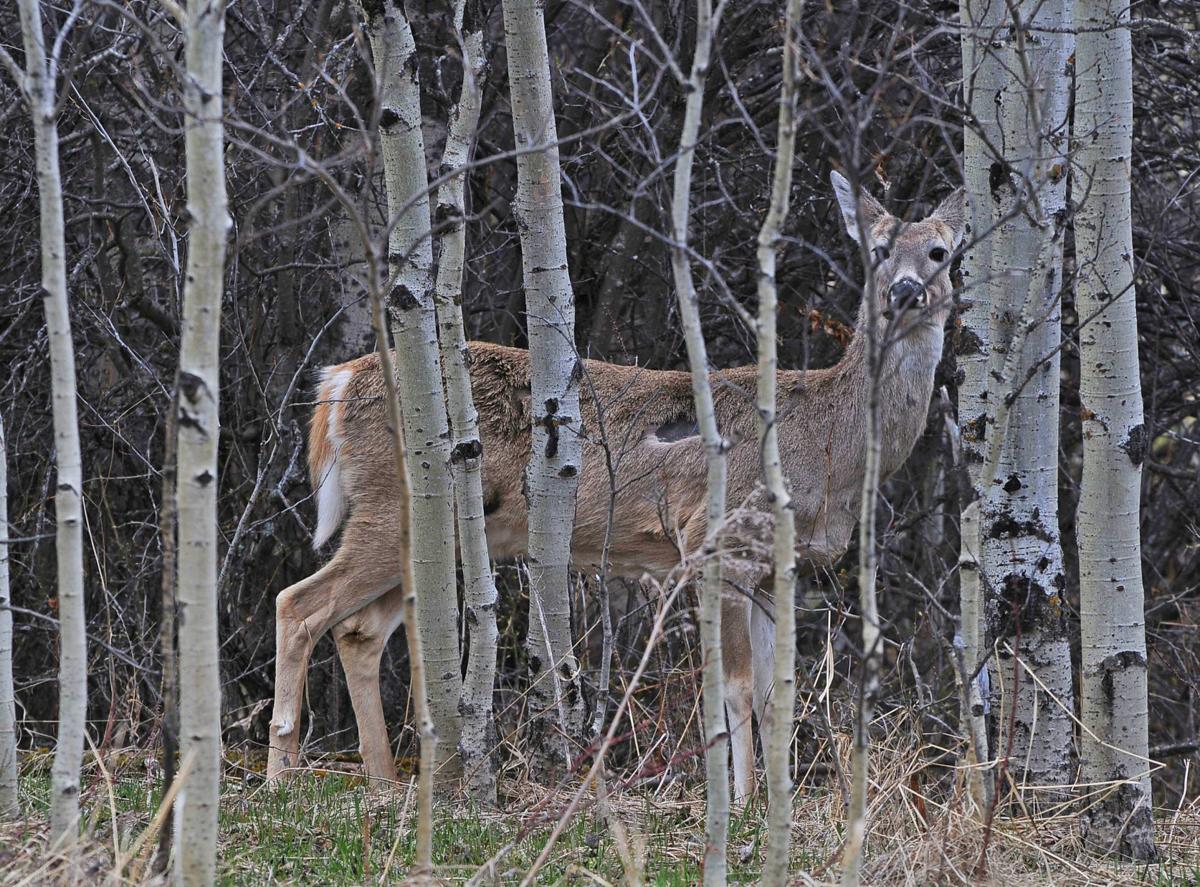 Whitetail deer populations across the United States are estimated at 30 million. 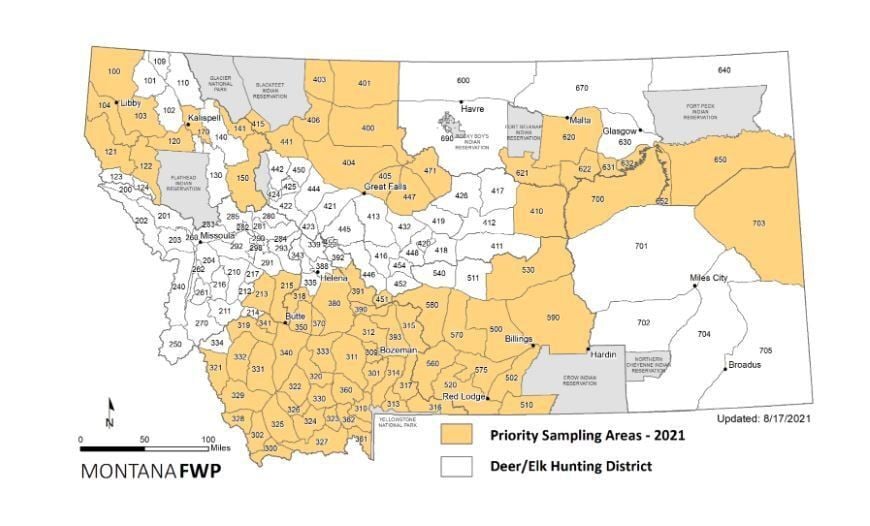 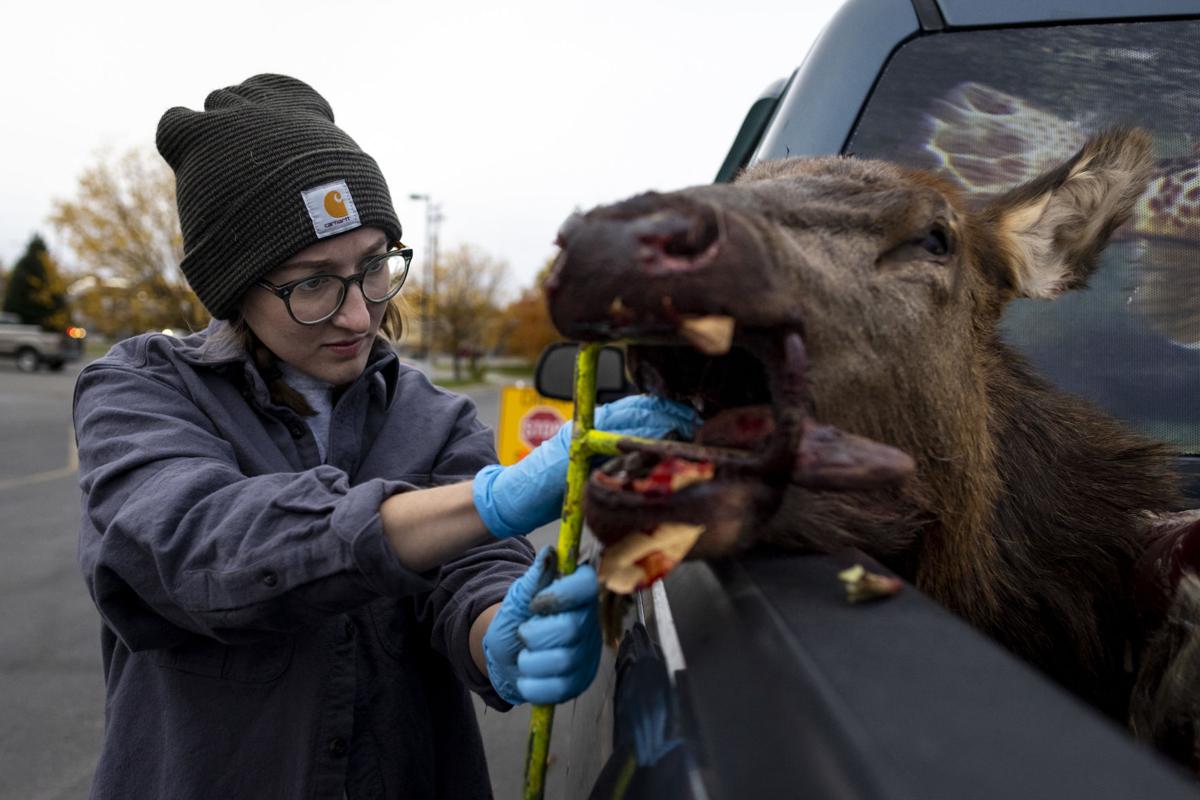 Regional check stations, such as this one in Billings, is one way for hunters to have their elk, deer or moose checked for chronic wasting disease.