In one recent week, a New Yorker got a free COVID-19 test in a jiffy, with results the next day, while a Coloradan had to shell out $50 for a test two cities from her hometown after a frantic round of pharmacy-hopping. A Montanan drove an hour each way to get a test, wondering if, this time, it would again take five days to get results.

While COVID testing is much easier to come by than it was early in the pandemic, the ability to get a test — and timely results — can vary widely nationwide. A fragmented testing system, complicated logistics, technician burnout and squirrelly spikes in demand are contributing to this bumpy ride.

“We’re still where we were 18 months ago,” said Rebecca Stanfel, the Montana woman who had to wait five days for test results in Helena last month after being exposed to someone with the virus.

Unpredictable waits can be a problem for those trying to plan travel, return to school from a quarantine — or even get lifesaving monoclonal antibody treatment within the optimal window if they do have COVID.

The White House said in early October it plans to buy $1 billion worth of rapid antigen tests to help improve access to the hard-to-find over-the-counter kits. But people are also facing problems getting molecular testing, including the gold-standard PCR tests.

Public health labs are no longer hamstrung by supply bottlenecks on individual test components such as swabs or reagents, said Kelly Wroblewski, director of infectious disease programs for the Association of Public Health Laboratories. But they are still bearing a large testing load, which she had expected to shift more to commercial or hospital-based labs by now.

Testing labs of all stripes are also facing worker shortages just like restaurants, said Mara Aspinall, co-founder of Arizona State University’s biomedical diagnostics program, who also writes a weekly newsletter monitoring national testing capacity and serves on the board of a rapid-testing company.

“The staffing shortage is very, very real and holding people back from increasing capacity,” she said.

Something as simple as proximity also still dictates how quickly test-takers get results.

“Northern Maine is a good example,” Aspinall said. “Anything you do with PCR is going to take an extra day because it’s got to be flown or driven a ways.”

Even in a place such as Longmont, Colorado, near many laboratories and hospitals, PCR samples from the local mass-testing site get shipped by air each evening to a lab in North Carolina.

That mass-testing operation recently moved back to its original location at the county fairgrounds after a summer stint in a small church parking lot. Demand for PCR tests in the county quadrupled from 600 weekly tests in July to 2,500 a week in September. Chris Campbell, emergency manager for Boulder County Public Health, attributes the heavy traffic to schools reopening, an uptick in infections and the difficulty in acquiring over-the-counter rapid tests.

Campbell said it sometimes took residents four or five days to get their PCR results, though that’s dropped to two as the contractor they work with, Mako Medical, has built its laboratory capacity back up.

“It’s pretty inexcusable to have a turnaround time that long. It really does impact our ability to really stop transmission,” Campbell said. “And also, it has an economic impact to businesses, to schools, to early childhood facilities.”

Mako’s lab operates 24/7 and the company uses private planes to speed up shipping, according to a statement from chief operating officer Josh Arant. While Mako’s weekly median turnaround time never exceeded 72 hours last month, the statement said, in recent weeks it has returned results to area residents an average 46 hours after specimen collection.

Portable devices now exist that can eliminate the need for shipping samples. They can do molecular analysis, including PCR, in under an hour — a process that typically takes at least four to five hours in a lab. A Washington, D.C., testing truck has three Cepheid machines on board, each about the size of a printer. Combined, they can give a dozen people PCR results in under an hour, at no cost to test-takers.

Still, demand outweighs supply for such fast molecular tests, due largely to the roller coaster of case surges, said Doug Sharpe, vice president of lab capital sales with Medline Industries, which supplies COVID testing components to labs across the country. “I don’t think anybody thought we’d be sitting here,” he added. “We’re selling more assays than we did at the height in 2020.”

Gigi Kwik Gronvall, an immunologist with the Johns Hopkins Center for Health Security who leads the center’s tracking of COVID testing, suggested that the variability in how long it takes to get results has created a seller’s market if companies can deliver results by a specific time. “People are going to pay for that sort of guarantee,” she said. “There’s this potential for people to get fleeced, for sure.”

MedRite offers PCR results analyzed in three hours in New York and Florida for those willing to pay more than $200 a pop. The company offers other tests, such as antigen tests and slower lab-based PCR tests, at no out-of-pocket cost.

Celeste Di Iorio felt fleeced after she spent a day driving from pharmacy to pharmacy in Fort Collins, Colorado, in search of a test that would give an answer in less than three days. As a musician, she’d been traveling out of state and wanted to know if she might be infectious before attending, among other things, a memorial for a relative who died of COVID. She and her partner eventually found rapid antigen tests at a pharmacy two cities over.

“We just paid $50 apiece for these tests, which pisses me off,” she said. “Because, you know, we’ve all been out of work for a year and a half, and this state has the money.”

In Helena, Stanfel has gotten a PCR test every week for many months because she takes immune-suppressing drugs for a rare condition called sarcoidosis. Her doctors told her to get the tests regularly because, even though she’s fully vaccinated — and has received an additional “booster” dose — she would likely need a treatment of monoclonal antibodies as soon as possible if she contracted COVID to prevent an early infection from “developing into something really bad.”

When Stanfel found out a friend she had visited later tested positive for COVID, she immediately got a test at her doctor’s office. It took five days to learn she had tested negative.

Montana’s public health lab is in Stanfel’s city, but state health department spokesperson Jon Ebelt said the volume of tests since early August has regularly exceeded the lab’s capacity. As such, they’ve had to prioritize tests from hospitalized or symptomatic people and send other specimens to private labs, a process that can stretch the wait time for results to up to seven days.

In New York City, where mobile-testing vans are parked in every borough and in-person home testing is offered, residents are reporting quick turnaround for molecular tests because the labs analyzing their samples are close by.

For example, in Manhattan, Justin Peck got back from a road trip to Canada on a Tuesday night, walked about five minutes to a mobile-testing van on Wednesday, and had PCR results by Thursday morning, clearing him just in time to go to work for the first time in 18 months as a dancer in “The Phantom of the Opera” on Broadway.

Aspinall said flu season will likely lead to an increase in demand for COVID testing as people with COVID-like symptoms seek answers about the cause of their illness, compounding existing staffing issues. “We’re at a very precarious point,” she said. “It’s not enough to go forward if the testing volume continues as I expect it will.”

KHN (Kaiser Health News) is a national newsroom that produces in-depth journalism about health issues. Together with Policy Analysis and Polling, KHN is one of the three major operating programs at KFF (Kaiser Family Foundation). KFF is an endowed nonprofit organization providing information on health issues to the nation.

Jan. 6th prosecutors use insurrectionist’s ‘Game of Thrones’ quote against him

Jan. 6th prosecutors use insurrectionist’s ‘Game of Thrones’ quote against him

From her Baltimore dining room, Susan Goodlaxson can see her neighbor gardening across the street. But while other neighbors stop to chat, Goo…

A Colorado town is about as vaccinated as it can get. COVID still isn’t over there.

San Juan County, Colorado, can boast that 99.9% of its eligible population has received at least one dose of COVID-19 vaccine, putting it in t…

COVID is killing rural Americans at twice the rate of urbanites

Since the pandemic began, about 1 in 434 rural Americans have died of COVID, compared with roughly 1 in 513 urban Americans.

A KHN review of hundreds of pieces of legislation found that, in all 50 states, legislators have proposed bills to curb such public health powers since the COVID-19 pandemic began.

3 Montana school districts go virtual or close due to COVID

No public school classes will be held statewide on Thursday and Friday due to the annual educator conferences.

The new deaths touch 15 Wyoming counties. Natrona County saw the most deaths, with nine residents included in this most recent update. 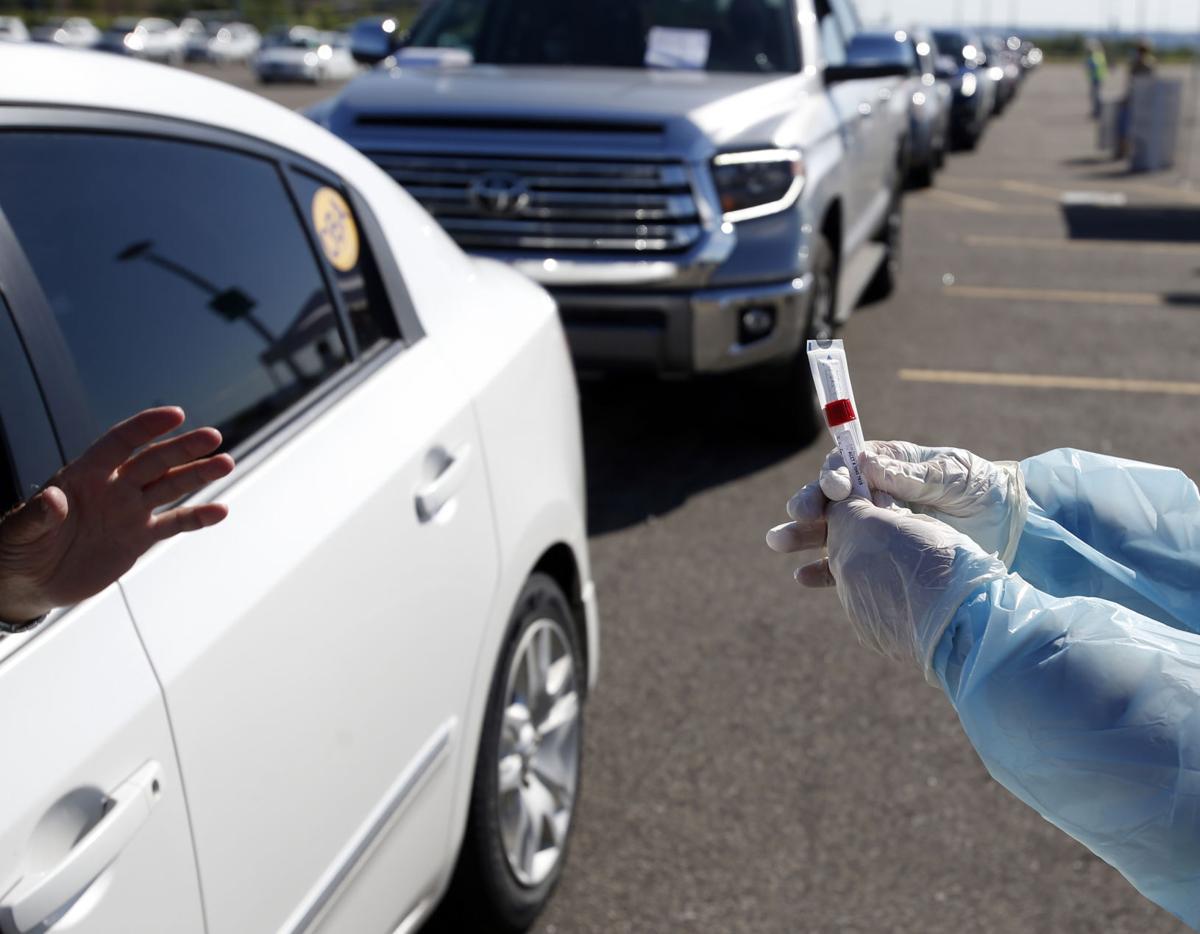 Kristi Roberts of RiverStone Health hands a testing swab to Wayne Leischner during the COVID-19 testing event at MetraPark on Saturday, June 20, 2020. 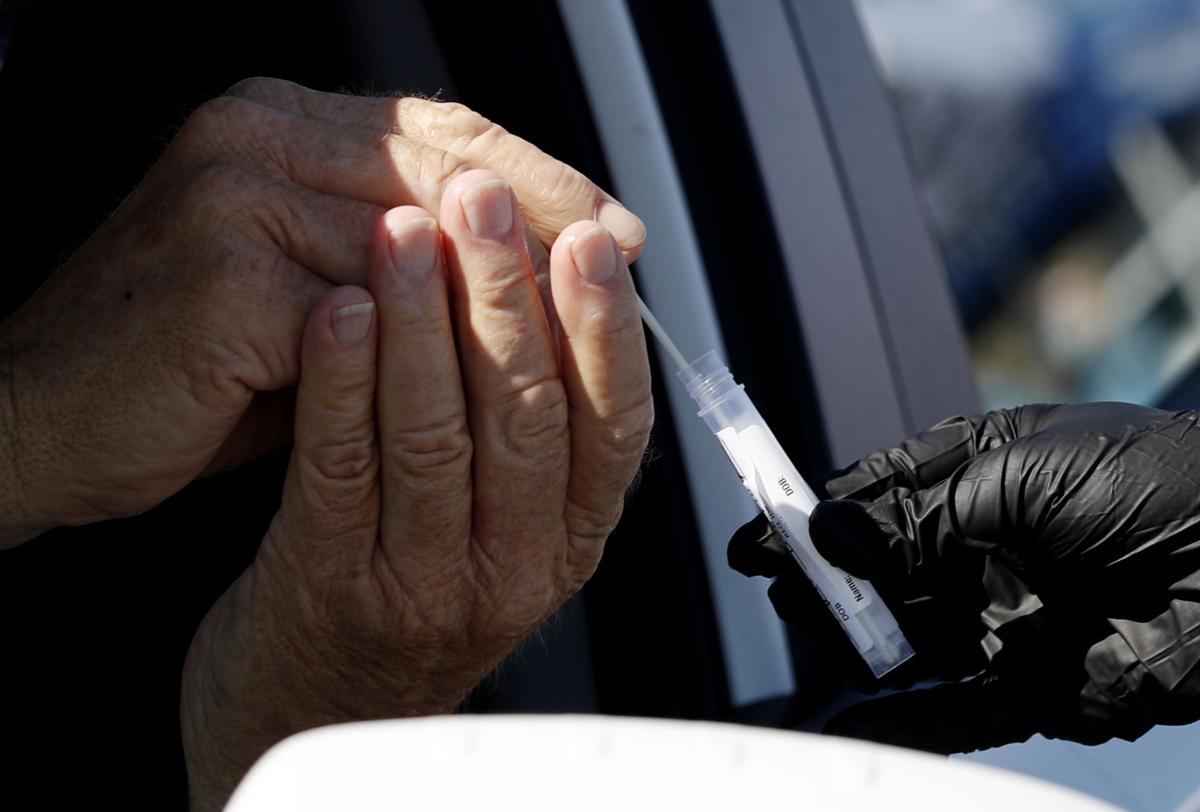 Susan Lehman holds a vial for a person to put their swab in during a COVID-19 testing event at MetraPark on Saturday, July 11, 2020. 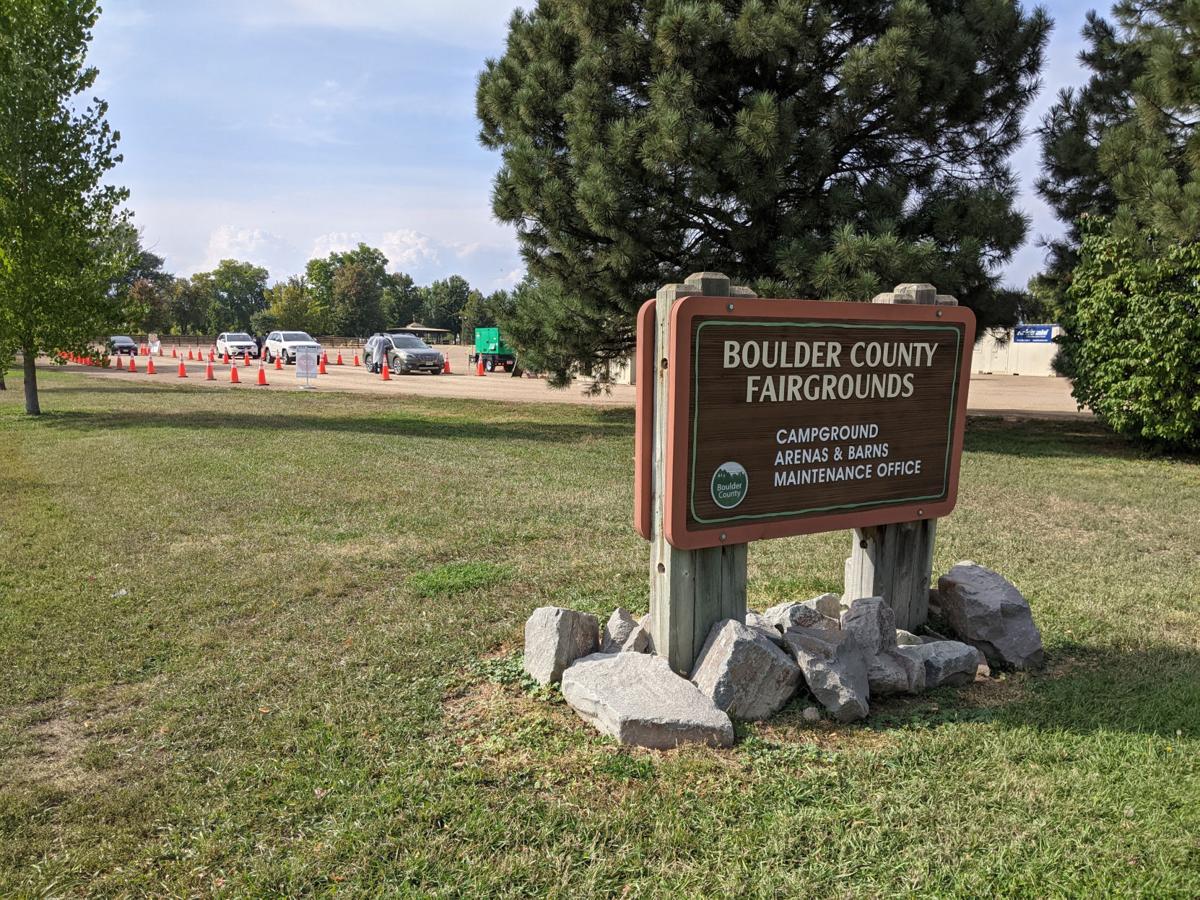 The mass covid-19 testing operation in Longmont, Colorado, recently moved back to its original location at the Boulder County fairgrounds after a summer stint in a small church parking lot. (Rae Ellen Bichell/KHN) 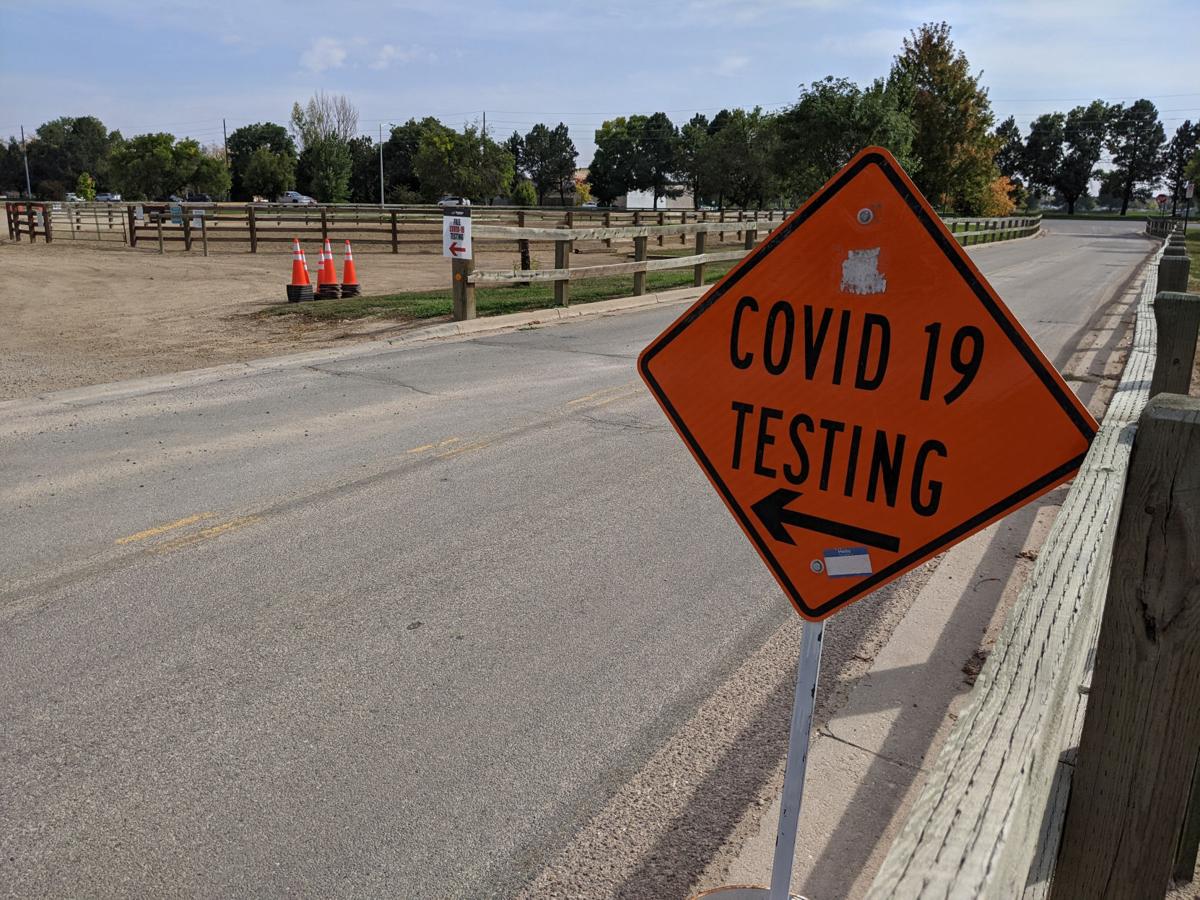 Demand for PCR covid-19 tests in Boulder County, Colorado, quadrupled from 600 tests a week in July to 2,500 a week in September. (Rae Ellen Bichell/KHN) 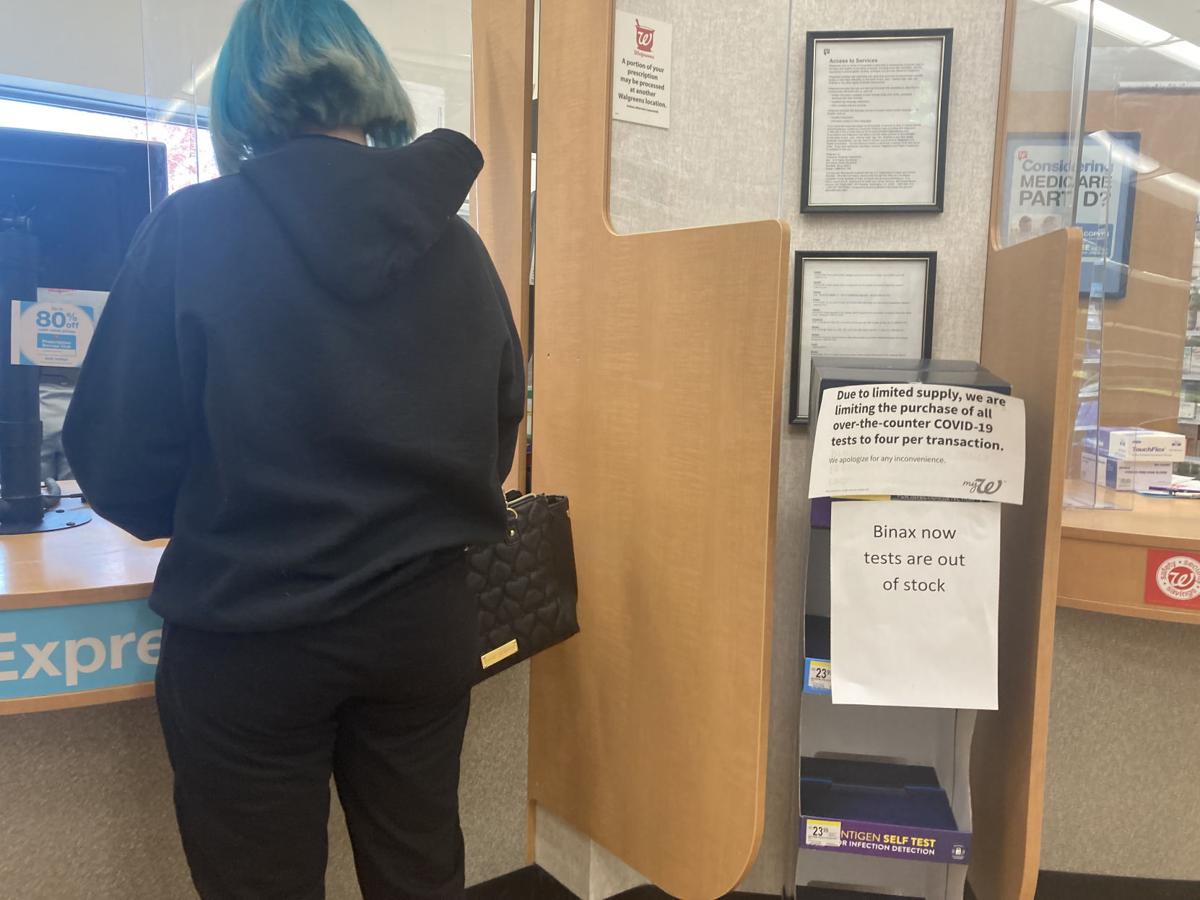 A sign tells customers at the Walgreens pharmacy in Helena on Oct. 5, 2021, that sales of at-home COVID-19 tests are being rationed.