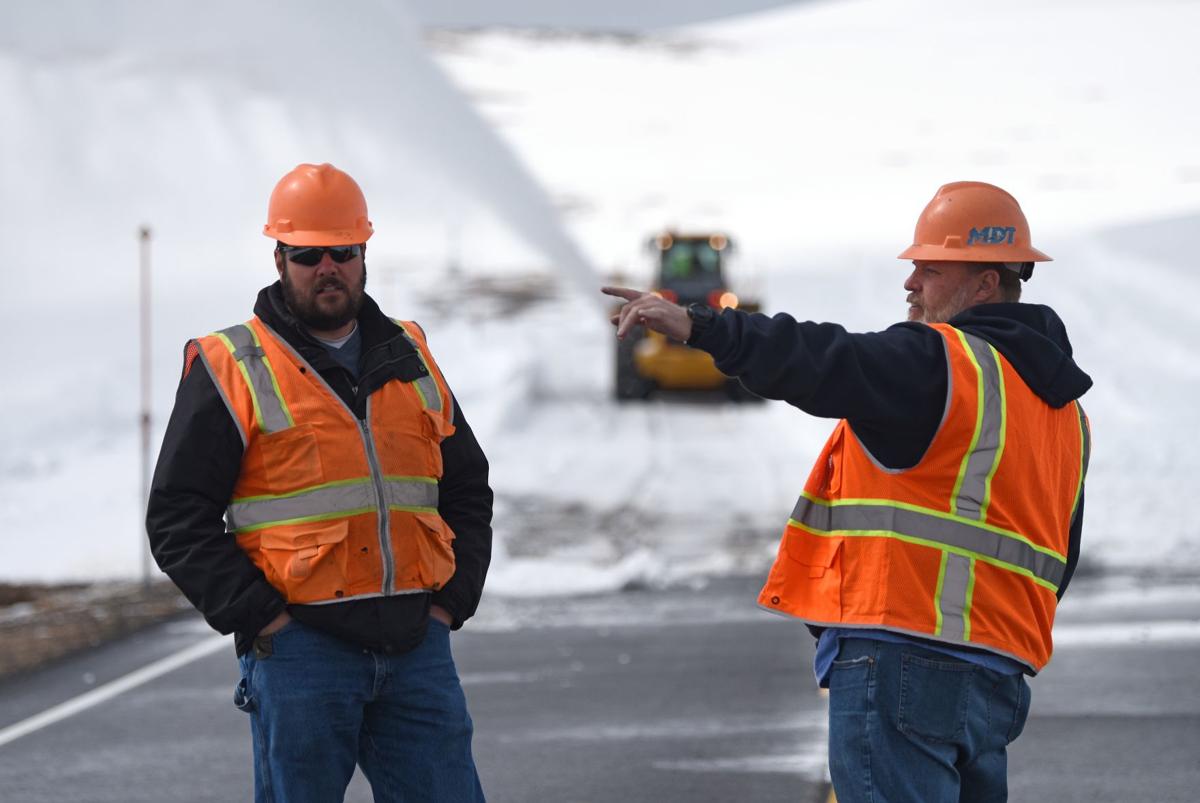 Walt Haughton, left, and Stew West speak about wildlife found on the Beartooth Pass on Thursday, as plow crews work in the background. 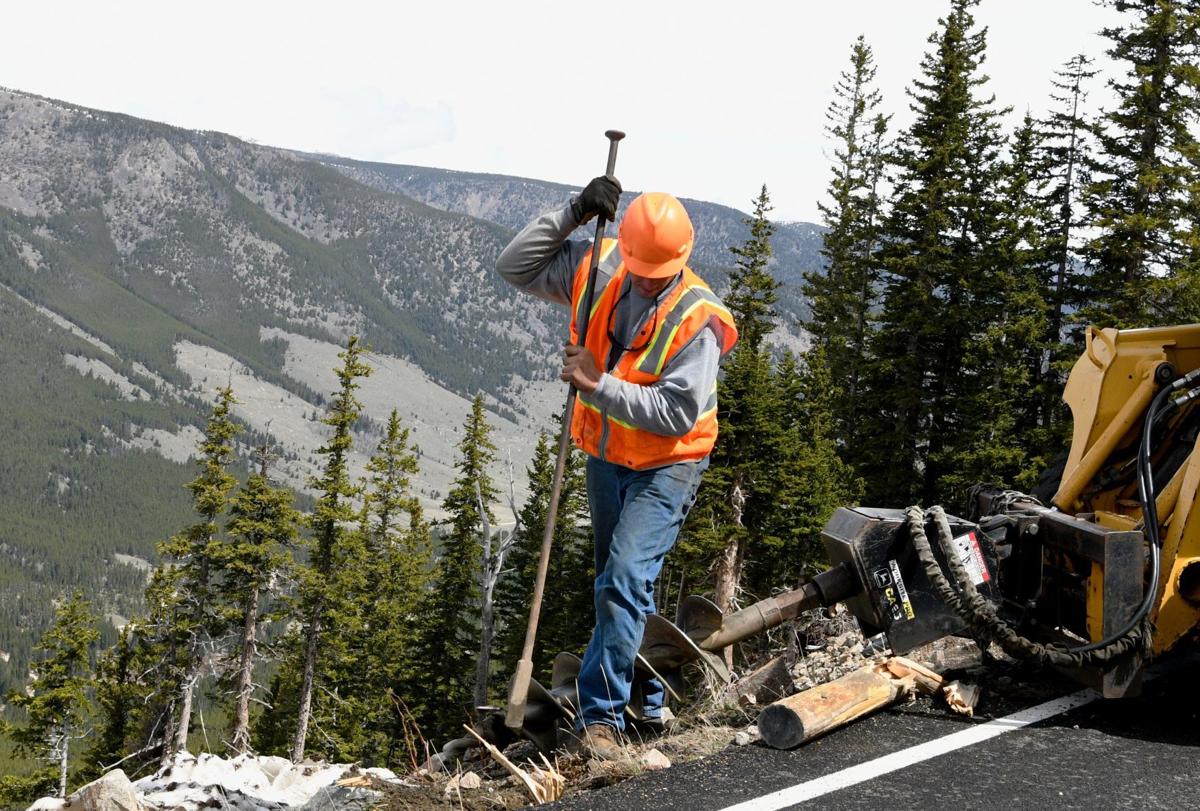 Crew members repair damaged guard rails on the road to Beartooth Pass on Thursday. The Montana Department of Transportation began the annual clearing work April 8, and hopes to have the pass open by Memorial Day weekend. 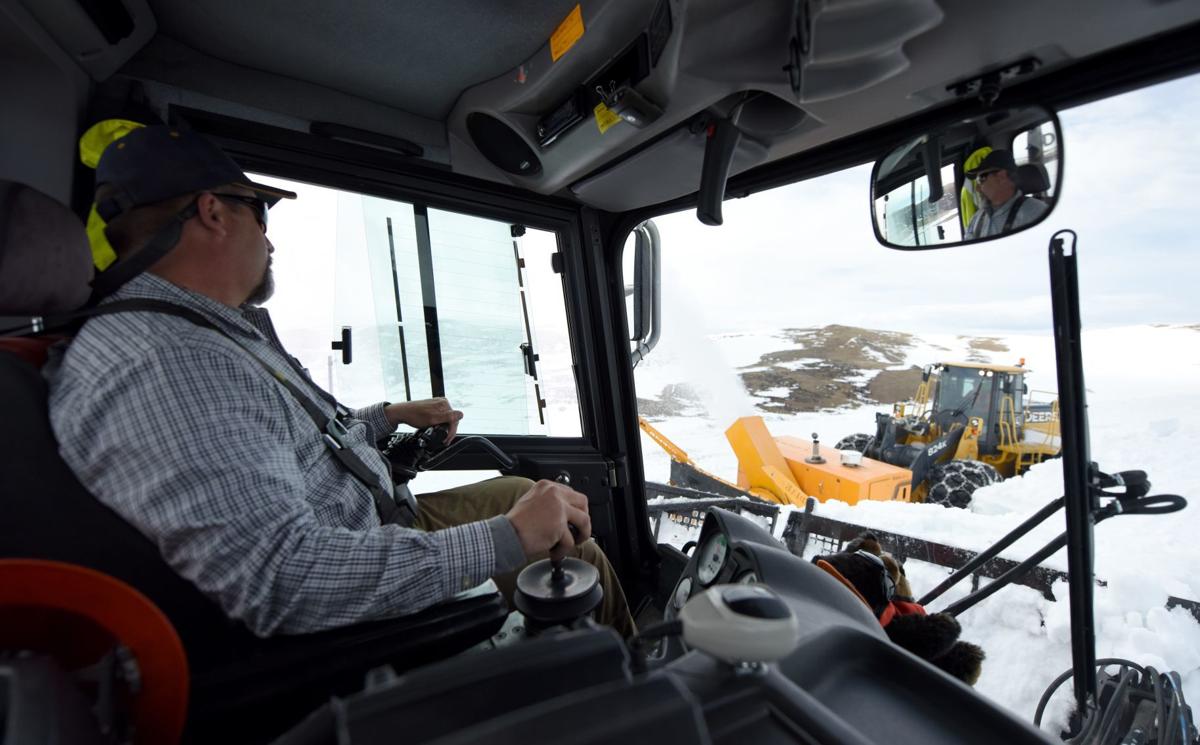 Dwayne Reisig, a senior supervisor for the Montana Department of Transportation, uses a snow cat plow to clear the Beartooth Pass near the Montana-Wyoming border on Thursday. 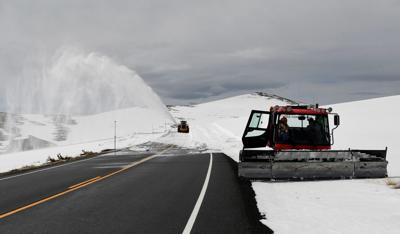 Duane Reisig spent Thursday the way he’s spent each work day for the past five weeks: digging out the Beartooth Highway.

Driving a snow cat — the same machine used to groom ski slopes — he worked layer by layer to shrink the massive snow drifts that have accumulated on the 10,000 foot high mountain pass since autumn.

Reisig drove on top of a 15-foot cliff of packed snow, scraping off one foot at a time and dumping it onto the cleared lane of the roadway to his left for plows to pick up.

“It’s not a timed event,” he said with a laugh. “So you take your time with it.”

The Montana Department of Transportation began the annual clearing work April 8, with workers from Red Lodge, Billings, Laurel, Big Timber, Columbus and Bridger all pitching in.

The crews are on track to have it cleared by Memorial Day weekend, when they expect to see the usual lineup of vehicles waiting at the gate Friday morning.

Clearing the Beartooth Highway is a tremendous undertaking. It’s 11 miles from the gate at the base to the Montana-Wyoming state line at the top, where Montana road crews meet Wyoming and Forest Service crews working from the other side.

And in a heavy snow year, such as last year, drifts can accumulate up to 40 feet, Reisig said.

Snow clearing crews start at 5 a.m. to avoid the peak sun hours of the day, when snow will begin melting.

Road maintenance crews remove fallen rocks and repair guardrail on the lower switchbacks. They’ve still got a 300-foot section to fix from this winter.

The work is also highly technical.

When he starts, Reisig is carving a road out of snow, hugging tight to the sharp curves in the roadway.

“There are days up here where we can’t see,” Reisig said. “It’s snowing, the wind’s blowing. So I’m going by feel. So that’s why I’m using the edge of my plow here to feel for the edge of the rocks on the side of the hill, there.”

The snow cat burns through 25 to 30 gallons of gas every five or six hours, Reisig estimated. The largest blower on site uses 60 to 65 gallons in that time. They keep a fuel tank in the back of a one-ton pickup for quick refill.

Reisig has been doing this work for seven years. Like others in the Red Lodge Department of Transportation section, he knows the road well.

“So when we’re checking the roads all summer long, we’re making mental notes: All right, this corner here, all right, where’s the ditch bank? Where’s the rock wall?” he said.

While the work is demanding, crew members say it’s also rewarding. There’s the occasional mountain goat sighting. This year they saw a wolf.

And the view is unbeatable. West, the Billings supervisor, likes being on the pass without the normal crush of motorists during the summer season.

“We look forward to coming up here and helping out,” he said.

As the first motorists climb their way to the 10,947-foot summit of the Beartooth Highway when it opens at 8 a.m. on May 27, they likely won’t…