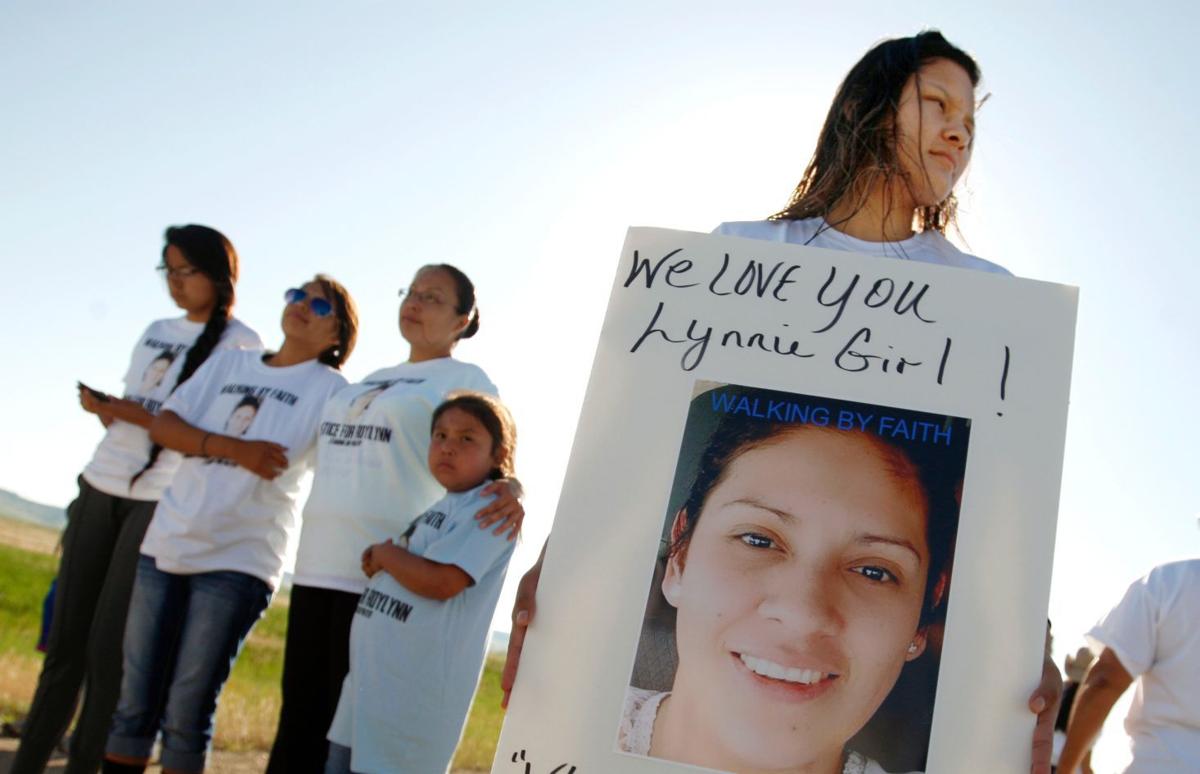 Trahnea Phelan holds a sign as people gather for a "Walking by Faith" march along Highway 212 to Crow Agency in support of Roylynn Rides Horse in June 2016. 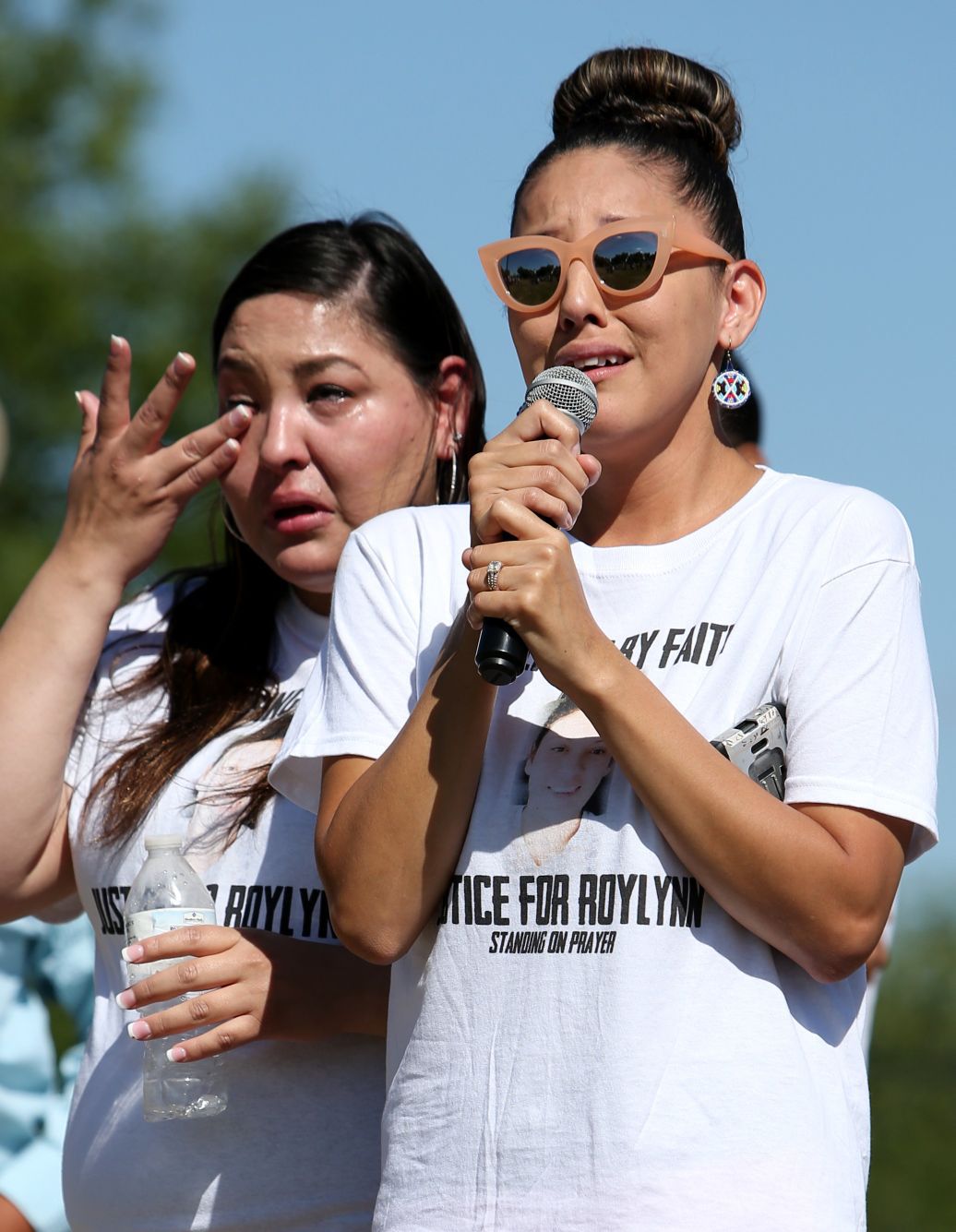 Sisters Trista Fog in the Morning, right, Trixy Phelan become emotional as they speak about Roylynn Rides Horse during a walk and gathering in Crow Agency on Thursday. 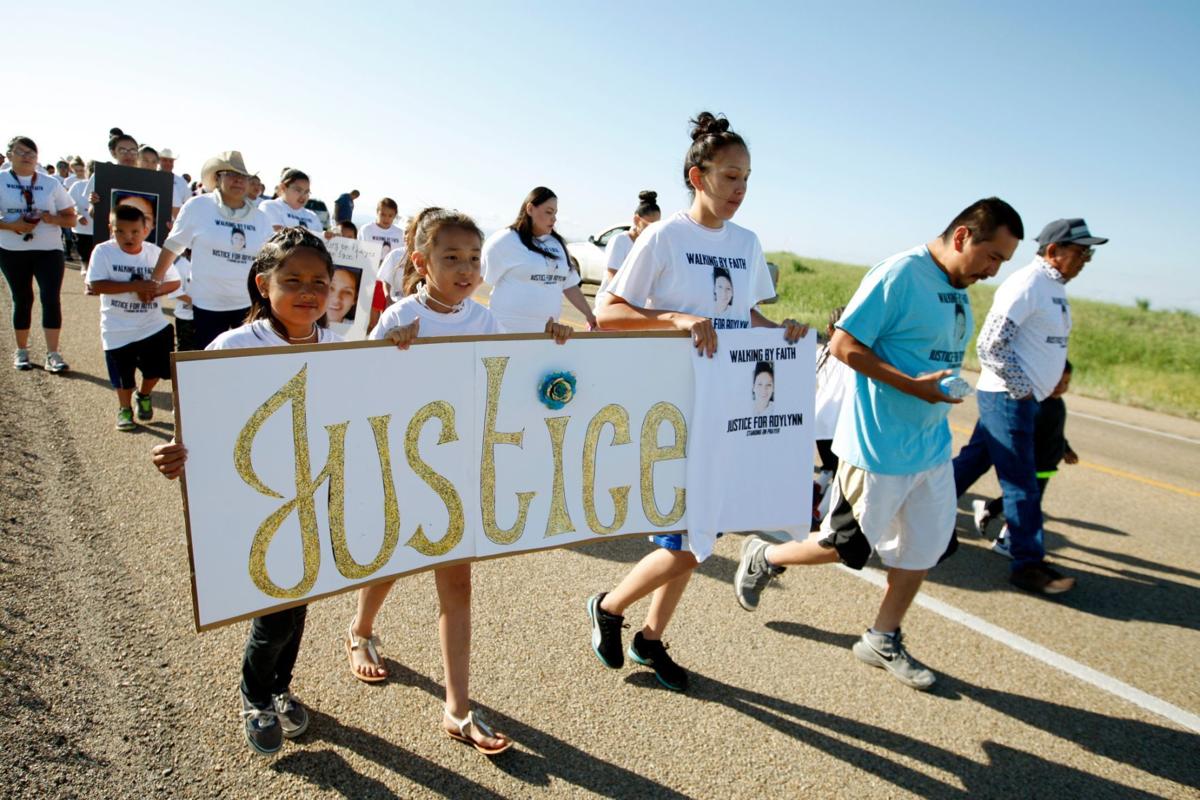 Over 100 people marched in a "Walking by Faith" walk on Highway 212 in support of Roylynn Rides Horse in Crow Agency on Thursday, June 16, 2016.

RoyLynn Rides Horse died a little after 4 a.m. Tuesday, according to Terry Bullis, the funeral director for Bullis Mortuary.

Bullis said a medical examiner is scheduled to do an autopsy Wednesday to confirm the cause of death, and then the body will be returned to Montana.

Details about Rides Horse's injuries and death are unclear, though court documents filed June 20 reported she had burns covering 45 percent of her body and severe frostbite on her legs. She was found near Castle Rock Road, a third of a mile north of U.S. Highway 212, between Crow Agency and Busby.

The U.S. Attorney's Office recently filed charges against two people in the attack on Rides Horse. Dimarzio Swade Sanchez, 18, of Busby, and Angelica Jo Whiteman, 23, of Lame Deer, left Rides Horse in a field after she was beaten, strangled and burned, according to charging documents.

Each initially was charged with assault with intent to commit murder and aiding and abetting. The case is being presented to a grand jury for indictment.

“Her will to live was there, but her body gave up,” said Darrin Old Coyote, Crow Tribal chairman. “She walked two miles after being burned. It just makes you want to protect the women and the young gals, not just here, everywhere this happens.”

Tuesday, Old Coyote was thinking about Rides Horse’s six children, including her 8-year-old son, who the chairman met at walk to support the boy’s mother on June 16. The boy asked Old Coyote, should the chairman speak to RoyLynn, to tell her the son wanted his mom back.

“How will they break this to the kids,” Old Coyote asked.

A news release sent out by the family in June included instructions on how to donate to the family, who have set up an account at Billings Federal Credit Union, 2522 Fourth Ave. N. Donations should be made to Jerry and Ernestine Pretty Weasel.

"The family would like to thank the community for the outpouring of support and for respecting their privacy during this time," the release said.

Previously, a GoFundMe page set up for the victim has a photo of the woman and a 241-character message.

"Our loved one was hurt and as family we want to help raise money for her recovery. ... She has six beautiful children. ... With the assault and burns she will require skin grafts."

The Crow Legislature released a statement expressing their sorrow for Rides Horse's death. They said they hoped the family would find comfort in the indictments of Sanchez and Whiteman, but said the Crow Nation would continue to support her family. They also promised to continue to pursue justice for the Crow People.

More in A man was found guilty of burning a woman to death. See our full coverage of his case here (5 of 20)

CROW AGENCY — After being beaten and set on fire in April, Roylynn Rides Horse walked three miles before she collapsed.

2 charged with assault in burning, beating of woman

The family of the Crow woman who was set on fire and left to die in April, has released a statement regarding her recovery.

Just about every week, Jose Figueroa said he hears from someone interested in becoming a police officer with the Bureau of Indian Affairs. Fig…

A Busby man charged with first-degree murder in the beating and burning death of a Crow Agency woman last year has agreed to admit to lesser crimes.

A Busby man accused of murder in the beating and burning death of a Crow Agency woman last year is mentally competent to proceed to trial, a f…

Second defendant of 3 accused in burning death to plead guilty

A Billings woman is expected to admit murder charges in the beating and burning death of Crow Agency woman last year, becoming the second pers…

Uncertain if statements of beaten, burned Crow Agency woman who died will be admitted in trial

A man convicted of murdering a woman on the Crow Reservation in 2016 by strangling her and lighting her on fire has been denied a new trial, d…

Man gets life in prison for death of woman who was strangled, lit on fire on Crow Reservation

A federal judge on Friday sentenced a 21-year-old Montana man to life in federal prison for the murder of a woman who was beaten, strangled, l…

Trahnea Phelan holds a sign as people gather for a "Walking by Faith" march along Highway 212 to Crow Agency in support of Roylynn Rides Horse in June 2016.

Sisters Trista Fog in the Morning, right, Trixy Phelan become emotional as they speak about Roylynn Rides Horse during a walk and gathering in Crow Agency on Thursday.

Over 100 people marched in a "Walking by Faith" walk on Highway 212 in support of Roylynn Rides Horse in Crow Agency on Thursday, June 16, 2016. 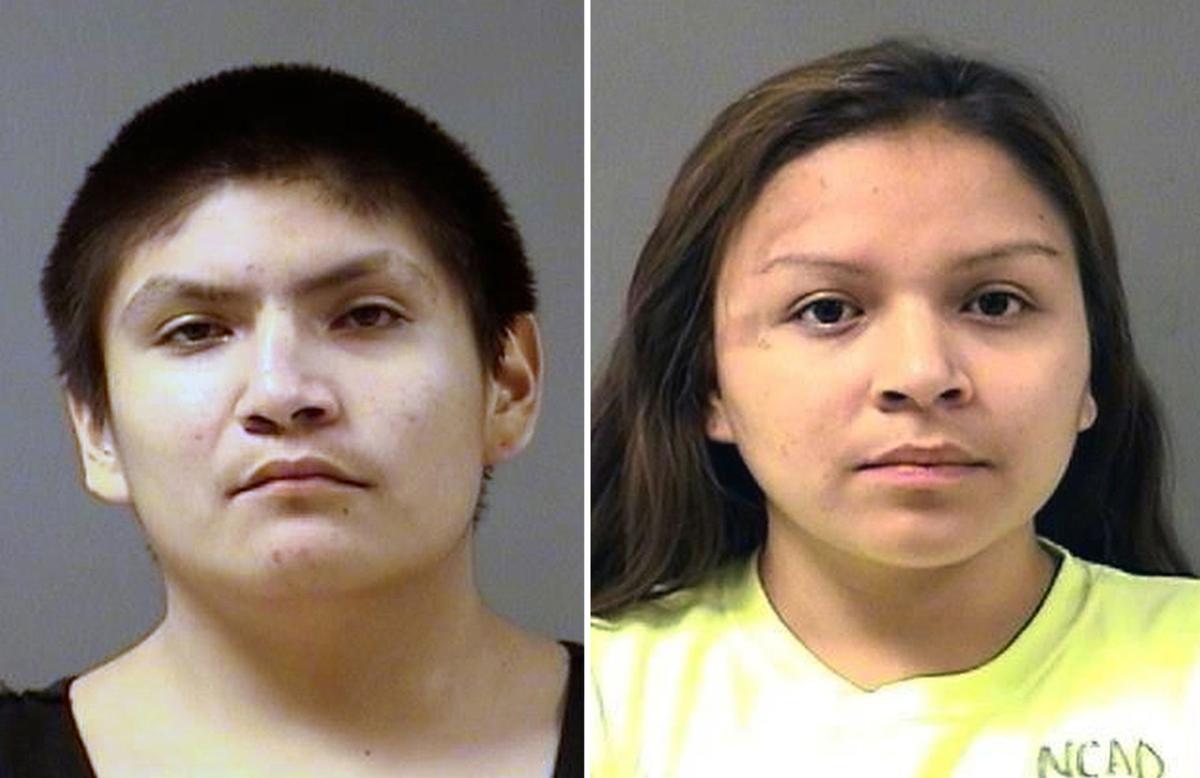 Dimarzio Swade Sanchez, left, and Angelica Jo Whiteman were first arrested in the beating and burning Roylynn Rides Horse, of Crow Agency. Each now faces a first-degree murder charge in the wake of Rides Horse's death.