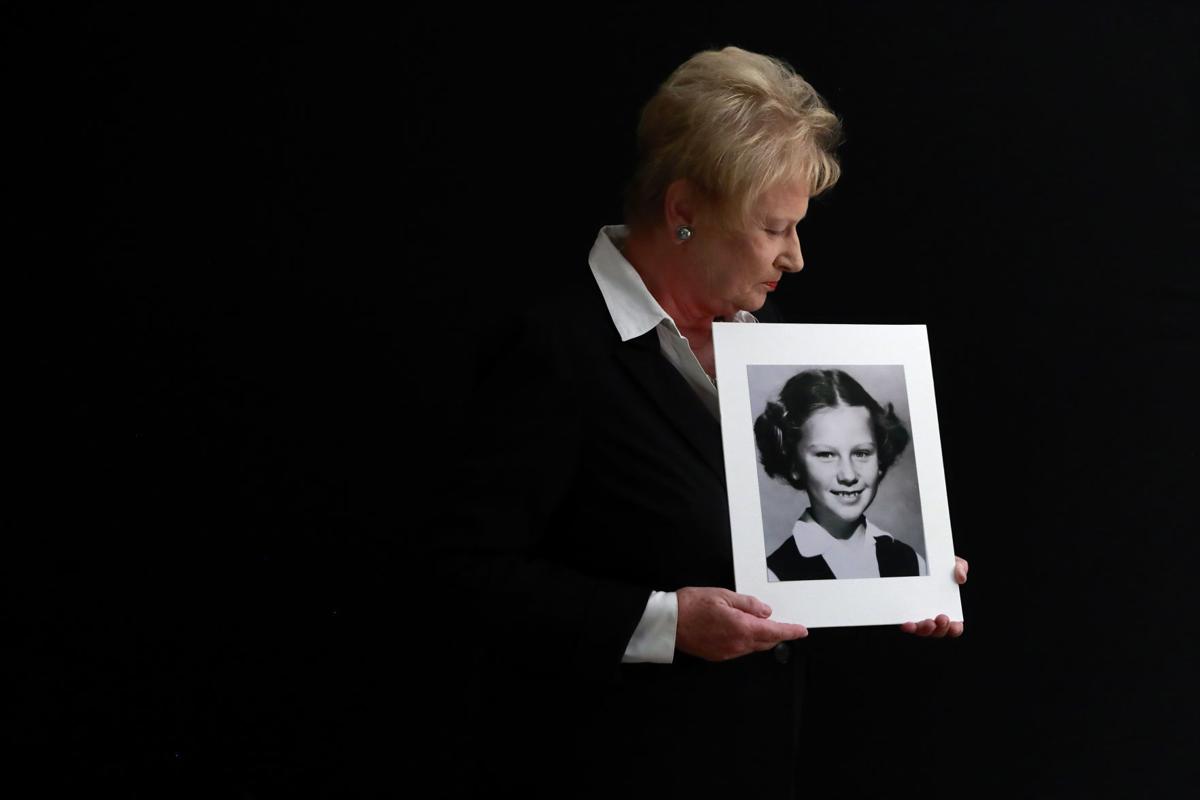 Nancy Holling-Lonnecker, 71, poses recently with a picture taken of her as a young girl, at her home in San Diego. Holling-Lonnecker plans to take advantage of an upcoming three-year window in California that allows people to make claims of sexual abuse no matter how old. Her claim dates back to the 1950s when she says a priest repeatedly raped her in a confession booth beginning when she was 7 years old. “The survivors coming forward now have been holding on to this horrific experience all of their lives,” she said. 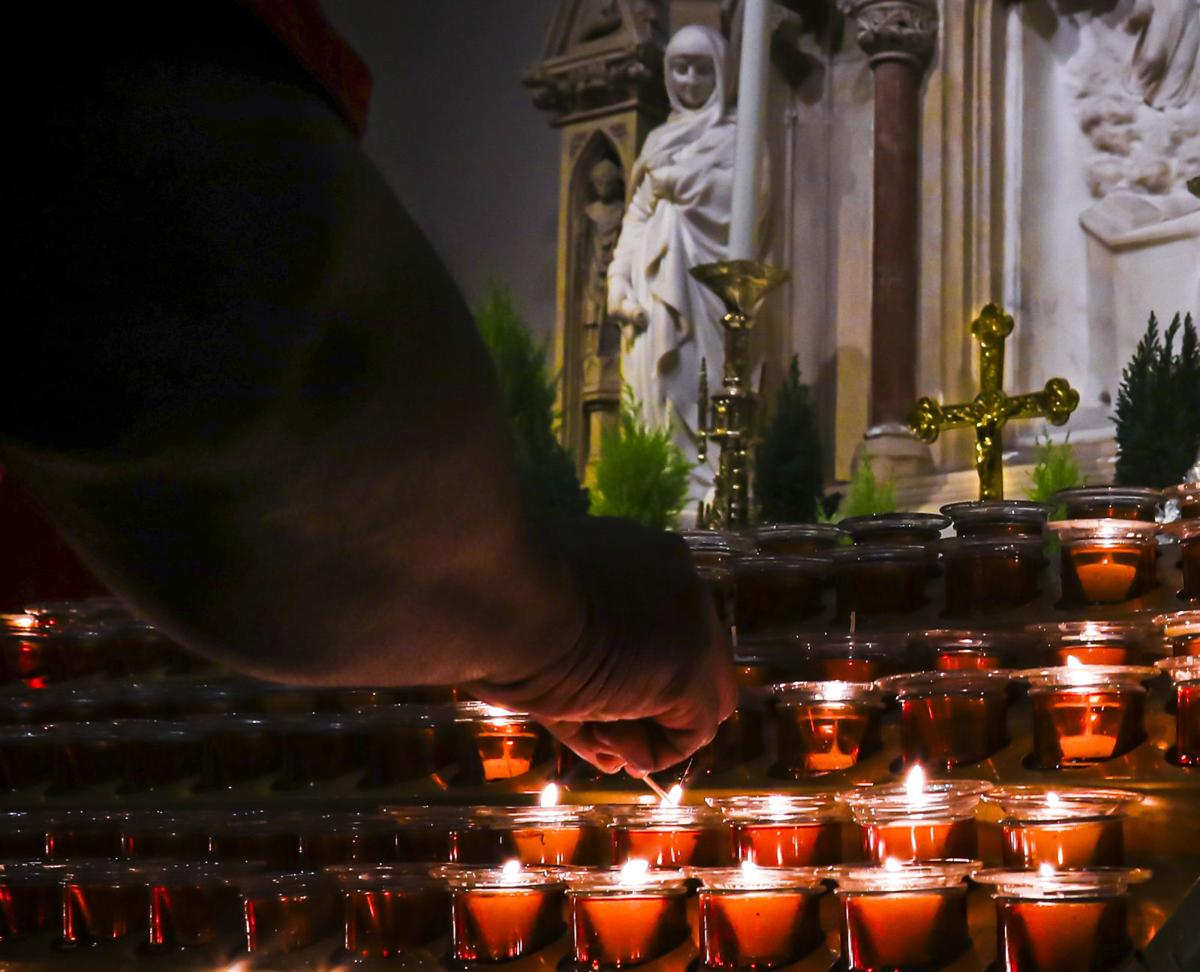 On Nov. 27, a worshipper lights candles at a prayer station during a visit to one of the great symbols of the Roman Catholic Church, St. Patrick's Cathedral, in New York. 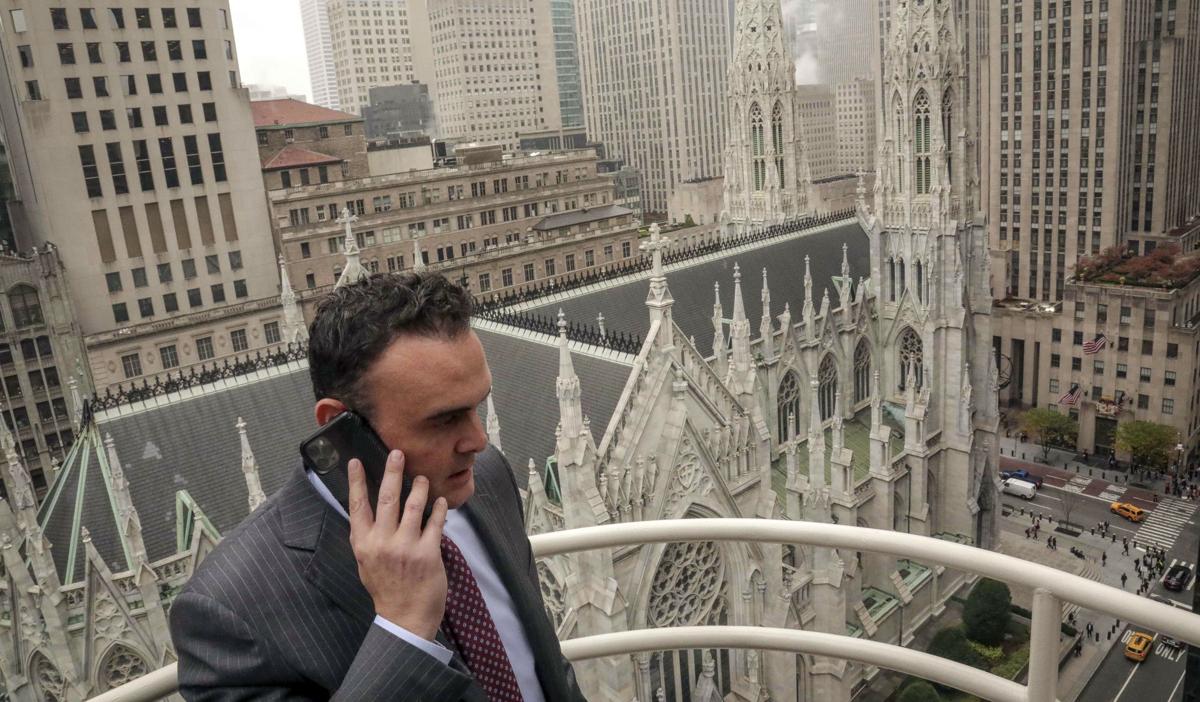 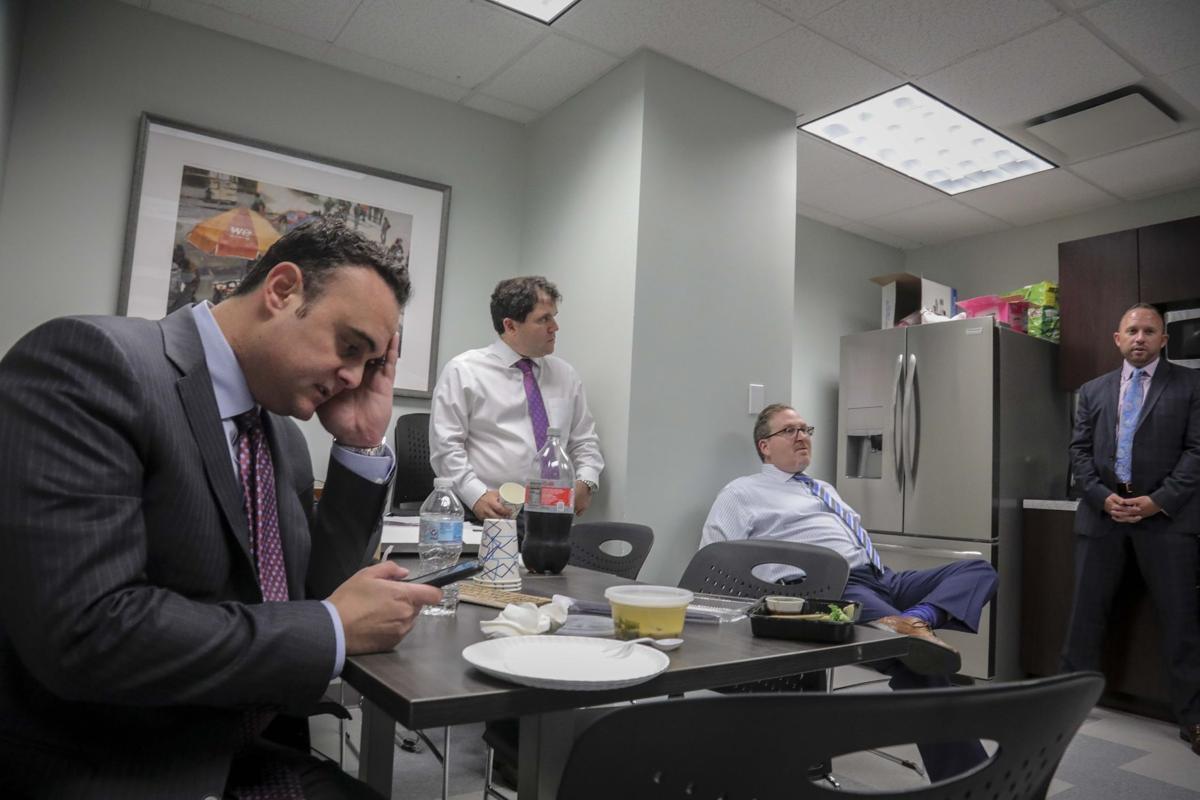 In this Tuesday, Oct. 29, 2019, photo, attorney Adam Slater, left, checks his phone during a working lunch with lawyers in his firm including partner Jonathan Schulman, second from left, Steven Alter, second from right, and Linc Leder, in Melville, N.Y. Slater said since New York state opened its one-year window allowing sex abuse suits with no statute of limitations, his firm has signed up nearly 300 new clients. (AP Photo/Bebeto Matthews) 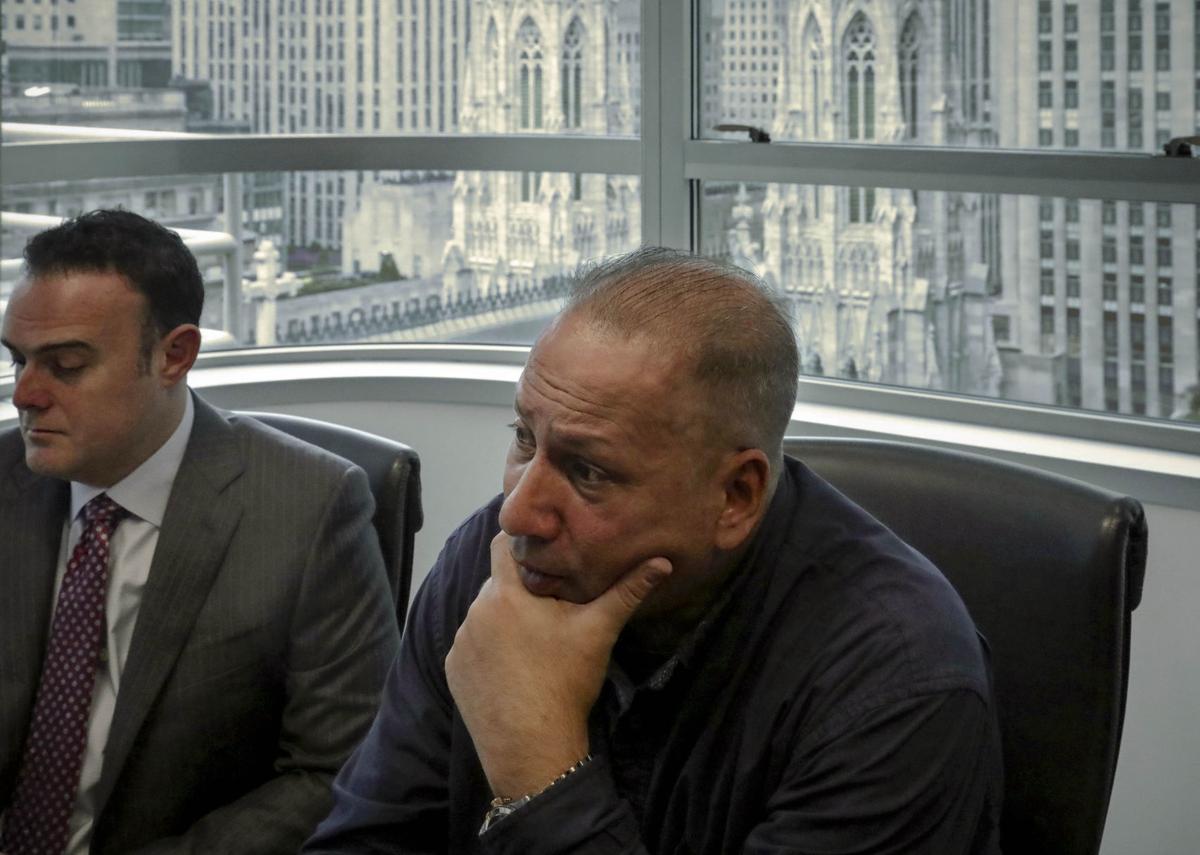 In this Tuesday, Oct. 29, 2019, photo, Ramon Mercado, right, recalls childhood clergy sexual abuse while his lawyer, Adam Slater, left, takes notes during an interview in his office overlooking St. Patrick's Cathedral, in New York. Mercado said he kept silent about the abuse he suffered at the hands of a New York priest, in part not to upset his devout Catholic mother. (AP Photo/Bebeto Matthews) 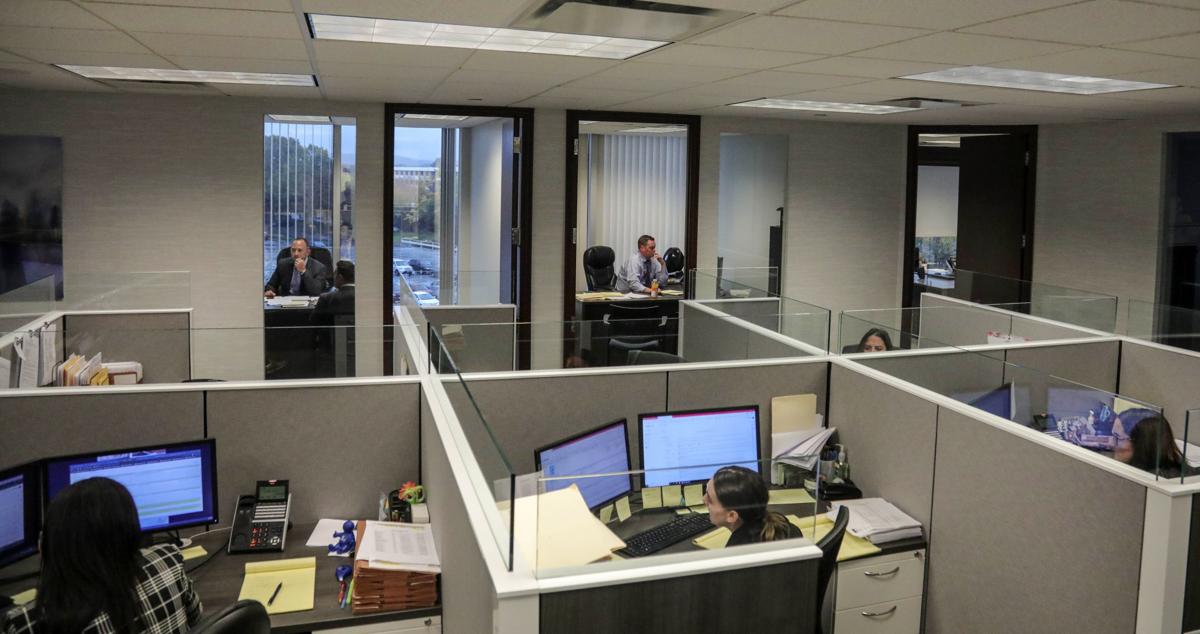 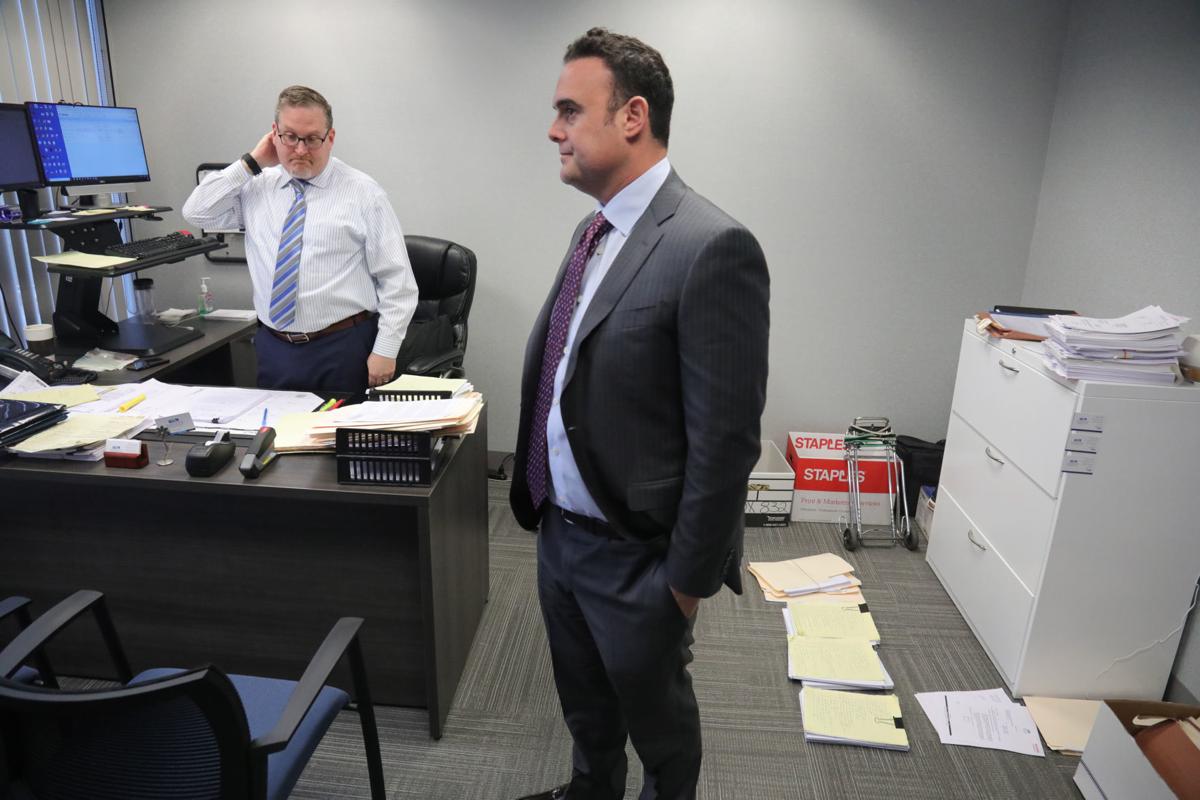 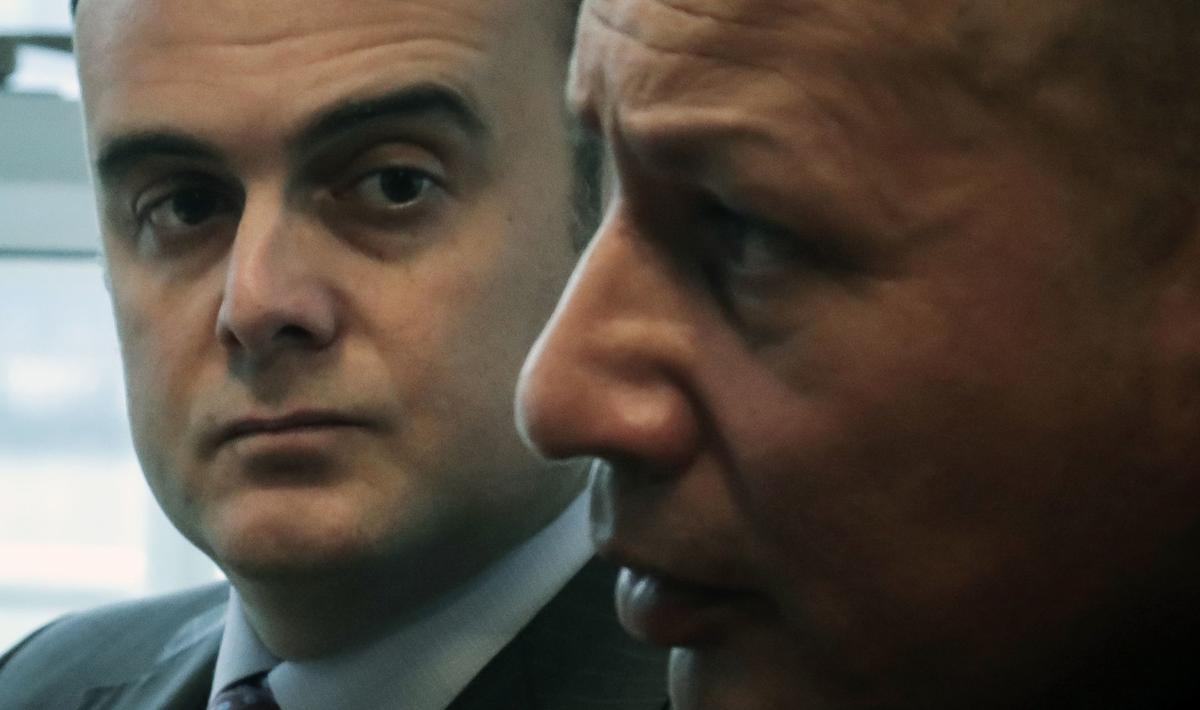 NEW YORK — A wave of new laws in 15 states including Montana that allow people to make claims of sexual abuse going back decades could bring a deluge of lawsuits against the Roman Catholic Church that could surpass anything seen so far in its clergy abuse crisis.

Associated Press reporting found it could result in thousands of new cases against the church and more than $4 billion in payouts.

It's a financial reckoning playing out in such populous Catholic strongholds as New York, California and New Jersey, among the eight states that go the furthest with "lookback windows" that allow sex abuse claims no matter how old.

In Montana, a one-year window opened on May 7. When it closes, lawsuits will be allowed until the victim making the claim is age 27, which was raised from 24.

The rush has lawyers fighting for clients with TV ads and billboards asking, "Were you abused by the church?" And Catholic dioceses are considering bankruptcy, victim compensation funds and even tapping valuable real estate to stay afloat.

"It's like a whole new beginning for me," said 71-year-old Nancy Holling-Lonnecker of San Diego, who plans to take advantage of an upcoming three-year window for such suits in California. Her claim dates back to the 1950s, when she says a priest repeatedly raped her in a confession booth beginning when she was 7 years old.

"The survivors coming forward now have been holding on to this horrific experience all of their lives," she said. "They bottled up those emotions all of these years because there was no place to take it."

AP interviews with more than a dozen lawyers and clergy abuse watchdog groups offered a wide range of estimates but many said they expected at least 5,000 new cases against the church in New York, New Jersey and California alone, resulting in potential payouts that could surpass the $4 billion paid out since the clergy sex abuse first came to light in the 1980s.

Some lawyers believe payouts could be heavily influenced by the recent reawakening over sexual abuse fueled by the #MeToo movement, the public shaming of accused celebrities and the explosive Pennsylvania grand jury report last year that found 300 priests abused more than 1,000 children in that state over seven decades.

"The general public is more disgusted than ever with the clergy sex abuse and the cover-up, and that will be reflected in jury verdicts," said Mitchell Garabedian, a Boston attorney who was at the center of numerous lawsuits against the church there and was portrayed in the movie "Spotlight."

Since the 15 states changed their laws within the past two years, the onslaught of lawsuits is coming in waves.

This summer, when New York state opened its one-year window allowing sexual abuse suits with no statute of limitations, more than 400 cases against the church and other institutions were filed on the first day alone. That number is now up to more than 1,000, with most against the church. New Jersey's two-year window opens this week and California's three-year window begins in the new year, with a new provision that allows plaintiffs to collect triple damages if a demonstrable cover-up can be shown. Arizona, Montana and Vermont opened ones earlier this year.

"A trickle becomes a stream becomes a flood," Marsh said.

Church leaders who had for years lobbied statehouses against loosening statute-of-limitations laws say this is exactly the kind of feeding frenzy they were worried about. And some have bemoaned the difficulty of trying to counter accusations of abuse that happened so long ago that most witnesses have scattered and many of the accused priests are long dead.

The church's response weighs heavily on compensation funds and bankruptcy.

New York Archbishop Timothy Dolan set up the first fund in 2016, pitching it as a way to compensate victims without walloping the church and forcing it to cut programs. It has since paid more than $67 million to 338 alleged victims, an average $200,000 each.

The idea has caught on in other states. All five dioceses in New Jersey and three in Colorado opened one, as did seven dioceses in Pennsylvania and six in California, including the Archdiocese of Los Angeles, the largest in the U.S.

More drastic and increasingly more common is the bankruptcy option. Less than a month after New York's one-year lookback window took effect, the upstate Diocese of Rochester filed for bankruptcy, the 20th diocese  — including the Montana dioceses in Helena and Billing/Great Falls — or religious order in the country to do so.

When a diocese files for bankruptcy, lawsuits by alleged abuse survivors are suspended and payments to them and others owed money are frozen while a federal judge decides how much to pay everyone and still leave enough for the diocese to continue to operate. It's orderly and victims avoid costly and lengthy court cases, but they often get less than they would if they were successful in a trial.

Bankruptcy can also leave abuse survivors with a sense of justice denied because the church never has to face discovery by plaintiff lawyers and forced to hand over documents, possibly implicating higher-ups who hid the abuse.

For many of his clients, New York lawyer Adam Slater said, that step is crucial.

"They want to see how the church allowed them to be abused, how they ruined their lives," he said. "It's a different process in bankruptcy — you don't get discovery and you don't get it in compensation programs. The truth never comes to light."

In Montana, a report issued in December of 2018, outlined abuse accusations against Jesuit priests that included dozens of priests who worked in churches, missions and schools in the state.

Many of the accusations are against priests already identified in bankruptcy reports for the Great Falls/Billings and Helena dioceses. But the Jesuit Order report includes dates of alleged abuse and new "credible claims" against priests. It also includes work history information that confirms priests were frequently shuffled between postings, including after alleged abuse.

In August of 2018, a federal judge approved a bankruptcy plan for the Great Falls-Billings Diocese. The diocese plans to pull from parishes a third of its share of a proposed $20 million settlement with sexual abuse victims. Drawing from savings and selling off unused property will cover the rest.

In 2014, the Catholic Diocese of Helena filed a bankruptcy reorganization plan that proposed a $16.4 million settlement for hundreds of people who said clergy members sexually abused them for decades while the church covered it up. The diocese had earlier filed for bankruptcy protection.

In 2011, a Northern Cheyenne woman in her 60s filed a lawsuit in which she says she was repeatedly molested and raped as a young girl by the Rev. Emmett Hoffmann, a revered and popular priest at the St. Labre Mission School in Ashland.

A room at RiverStone Health has become a safe place to break the silence on crimes against children. The Yellowstone Valley Children's Advocac…