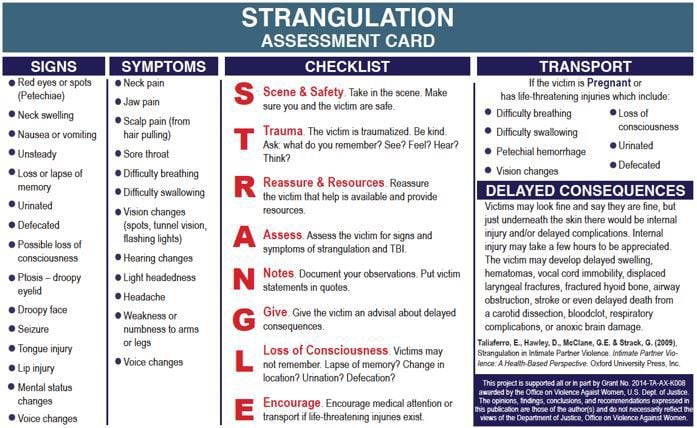 A checklist for doctors to use while assessing the injuries of a non-fatal strangulation victim. 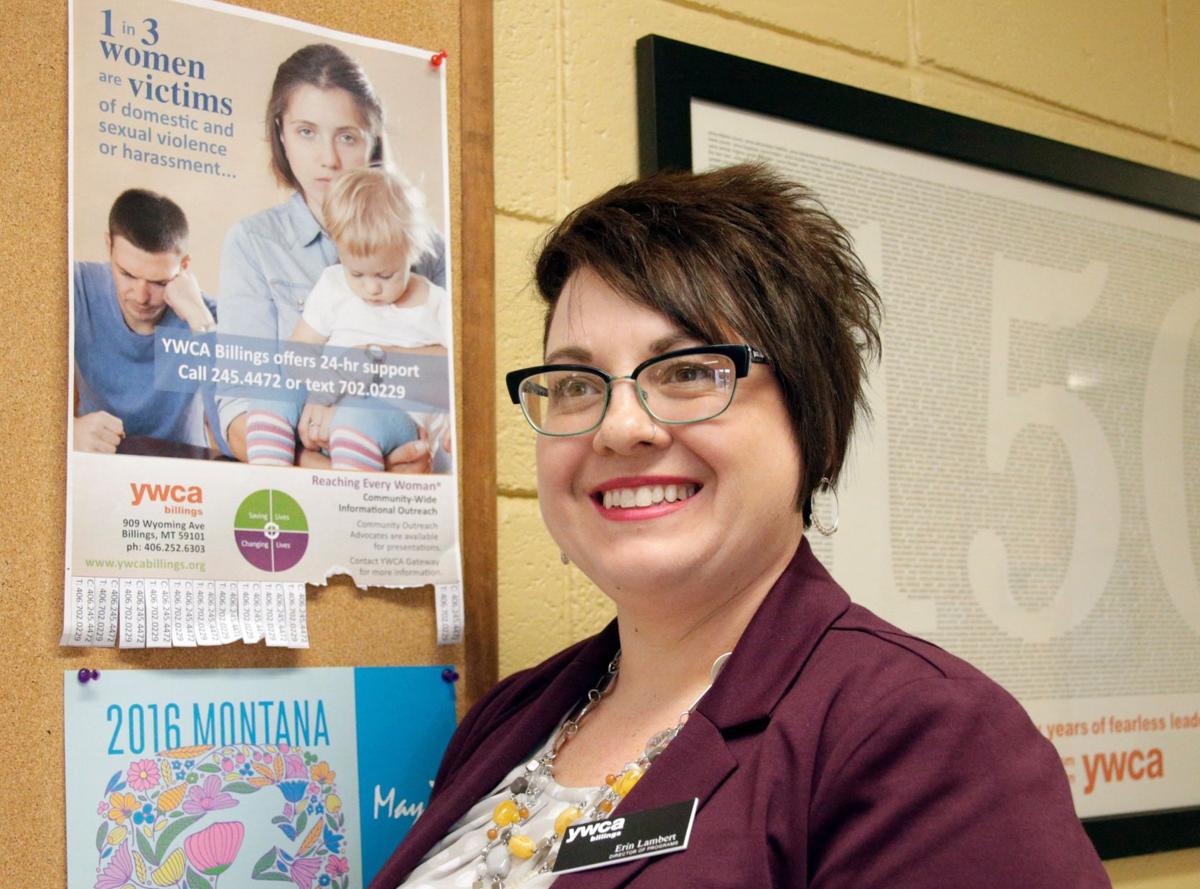 The YWCA's Erin Lambert says it is not unusual for women at the Gateway Shelter to say that they've been strangled multiple times by an abusive partner. 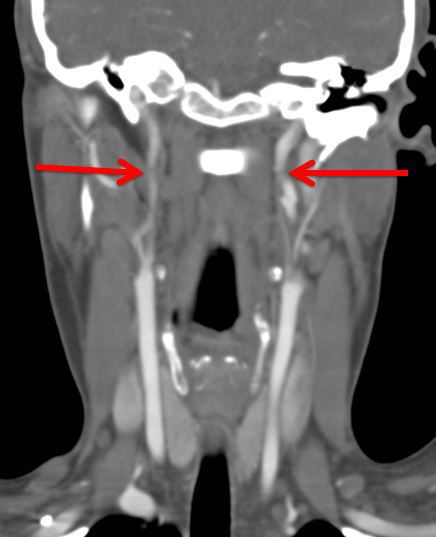 The hyoid, which is the U-shaped bone of the neck that is fractured in one-third of all homicides by strangulation. 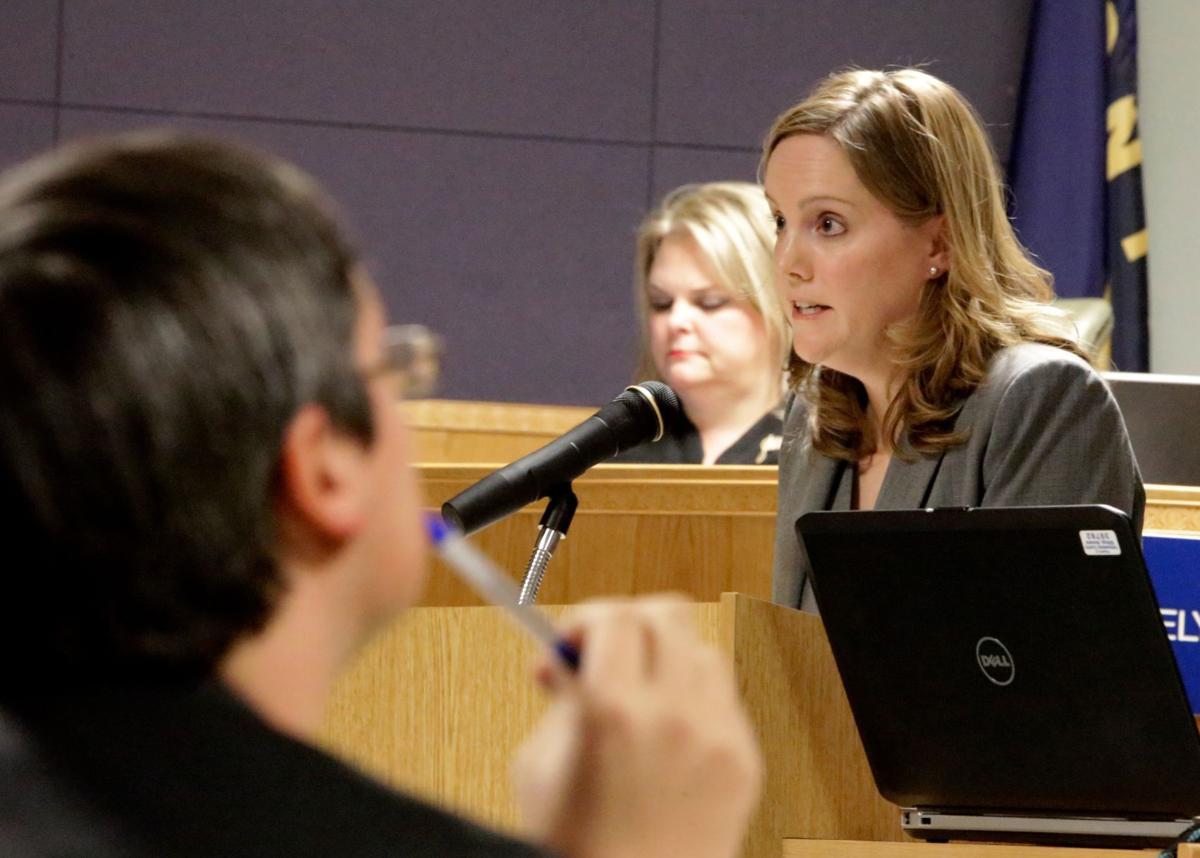 Chief Deputy Yellowstone County Attorney Juli Pierce presents closing arguments during a trial in 2015. Montana has made great strides from when strangulation could still be prosecuted as a misdemeanor offense, Pierce said.

Police found Jacob Neal Carroll in the bathroom of the apartment he shared with his girlfriend. He was straddling the woman with his hands wrapped around her neck.

The woman’s face was purple, and she wasn't breathing. Officers tried to pull Carroll off the woman, but he didn't let go until the police hit him with a stun gun.

Carroll was sentenced in 2010 on a charge of mitigated attempted homicide. His victim has suffered memory loss as a result of the strangulation.

Increased research into the lethal and often undiagnosed effects of non-fatal strangulation in domestic violence relationships led the Billings Police Department to bring in an expert to train officers on how best to investigate possible strangulation cases.

Billings Police Department Domestic Violence Investigator Kate Nash said she brought the training to Billings to raise awareness of how dangerous strangulation can be.

“Prior to this study, the common thinking was, unless it kills you, you are probably OK,” Pritchard said.

The research done in San Diego prompted many states to adopt strangulation statutes. Nine states do not have such a law, and Montana is one of them.

A strangulation statute was proposed during the 2005 legislative session, but was never voted on. In 2007, the Legislature added language to an existing statute that made it easier for prosecutors to charge strangulation cases as an aggravated assault. During that session, however, the Legislature also got rid of the two-year mandatory minimum for an aggravated assault charge.

Strangulation increases the chance of domestic homicide by 750 percent, Smock said. “Strangulation is the most effective way to show your power over another human being,” he said.

A bill making strangulation a stand-alone felony is being discussed by the office of Montana Attorney General Tim Fox in preparation of the 2017 legislative session, said Director of Communications Eric Sell.

In an effort to make the dangers of strangulation more relatable, Smock noted two Idaho studies that indicated 50 percent of men who killed police officers had a history of strangling women.

“You may be saving your own partner’s life,” Smock said to the officers.

The long-term effects of strangulation are often extensive, Smock said. If an untrained emergency room doctor examines a strangulation victim without conducting the proper tests, the victim could be discharged, only to suffer a stroke a few days later, Smock said. Because oxygen is cut off from the brain, victims may lose the ability to retain information, reason through problems and remember things. They also may have difficulty paying attention.

The brains of repeat victims of strangulation are similar to the brains of people who have been water-boarded and people who have had multiple concussions, Smock said. Victims can be at an increased risk of depression, anxiety and post-traumatic stress disorder. Research states women might suffer strokes from strangulation up to 10 years after the last event, Smock said.

Police officers need to ask detailed questions about the strangulation, but at the same time, many of these women either won’t remember or won’t admit the extent to which the strangulation occurred.

“The right question is, ‘Was any pressure applied to your neck?’” Smock said. “Did you see spots? Did everything go black? Did you pass out?”

Officers should ask the women if they are wearing the same clothes they wore during the attack, Smock said. After 15 seconds of strangulation, people often lose control of their bladder. Smock said soiled clothing and bed linens are evidence worth collecting because urine can be identified by florescent lighting. This kind of evidence can be essential to a prosecution’s case.

In 2015, Pritchard partnered with The Brevard County Sheriff's Office, the University of Central Florida, the State Attorney's Office, the Florida Department of Health and several domestic violence organizations to create a pilot program focused on evidence-based prosecution and forensic examinations of suspected strangulation victims. This included free forensic exams for any victim that police suspected of being strangled.

The goal of the program was to increase the number of strangulation cases being prosecuted in the county and increase the chances of conviction by collecting more evidence. This would allow a case to go forward, “regardless of if the victim felt safe enough to testify,” Pritchard said.

This multi-disciplinary approach to domestic violence would improve how domestic violence cases are handled in Montana, said Yellowstone Chief Deputy County Attorney Juli Pierce. Pierce attended the training and was the prosecutor in Carroll’s 2009 strangulation case. Montana has made great strides from when strangulation could still be prosecuted as a misdemeanor offense, Pierce said. But everyone who interacts with these victims must be aware of the signs of strangulation.

Pierce does not see the repeat strangulation cases Smock described in other cities. Offenders often make threats to kill their victims while strangling them, Pierce said.

But it is an under-reported crime, making it impossible to know how many victims are suffering repeat strangulation without reporting it to police. Also, Montana doesn’t track strangulation cases, Pierce said. This makes it difficult to know if the victim reported strangulation in the past.

"A stand alone offense would be custom made for strangulation. Investigating and charging the crimes would be easier, depending on the language" Nash said. "It would also reinforce to victims and officers how serious it is."

Director of Programs at YWCA Erin Lambert said it is not uncommon for women at the YWCA’s Gateway Shelter to report being strangled multiple times by a previous partner. Victims are “amazingly nonchalant” about being “choked out” by their partners, Lambert said.

“They’ll say, ‘It wasn’t too bad. He choked me out, and that was about it,’” Lambert said.

Spreading the danger of this type of attack starts with first responders and emergency room doctors, Nash said.

The Montana Domestic Violence Fatality Review Board identified five women who died from strangulation. But Lambert said she suspected if someone took a closer look at those cases, the offenders would have a history of strangling their partner.

“By the time someone gets to the point where they are willing to put their hands around another person’s throat, they are no longer concerned with potential consequences,” Lambert said.

Bill would change definition of consent in Montana rape laws

HELENA - A bill that removes the requirement of force from the definition of a nonconsensual sexual act is set for a Senate committee hearing later this week, along with three other Senate bills aimed at modernizing Montana’s laws concerning rape.

Domestic abusers get some treatment in Montana, but some wonder if it's enough

Eight men shuffled into a classroom to spend 90 minutes learning how to stop abusing women.

A law making strangulation a felony crime was introduced to the 2017 State Legislature Wednesday.

Dress for Success helps women one outfit at a time

Montana behind other states in prosecuting strangulation as a felony, Billings senator says

Strangulation is a violent and dangerous enough act to be prosecuted as a felony, according to Montana’s prosecutors.

A federal jury in Billings this week convicted Robert Wesley LaFountain of assaulting and strangling his partner.

A catered dinner set for Sept. 16 will benefit a drop-in center that seeks to help women learn to live better, safer lives free from addiction…

YWCA honorees include man who pushed for strangulation felony, Dress for Success president

Relying on honorees’ friends to lure them with subterfuge to the Hilands Golf Club Wednesday, YWCA Billings announced the winners of its 2018 …

A Billings man has been charged with raping a woman in the backyard of his Heights home.

Strangulation charges on the rise in Yellowstone County, but prosecutors see weak spot in penalties

A checklist for doctors to use while assessing the injuries of a non-fatal strangulation victim.

The YWCA's Erin Lambert says it is not unusual for women at the Gateway Shelter to say that they've been strangled multiple times by an abusive partner.

The hyoid, which is the U-shaped bone of the neck that is fractured in one-third of all homicides by strangulation.

Chief Deputy Yellowstone County Attorney Juli Pierce presents closing arguments during a trial in 2015. Montana has made great strides from when strangulation could still be prosecuted as a misdemeanor offense, Pierce said.