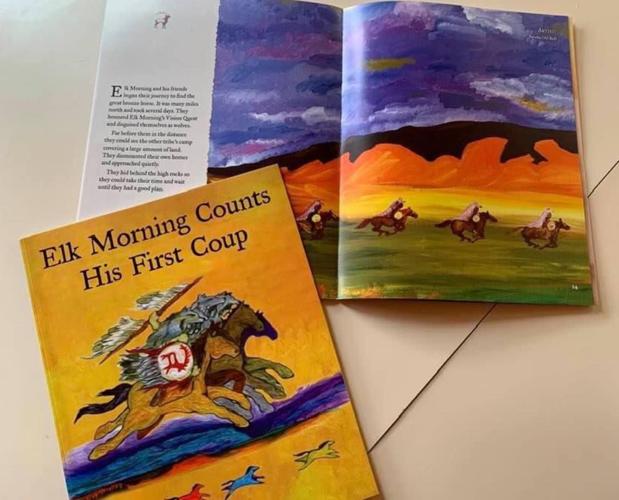 A copy of "Morning Elk Counts His First Coup." 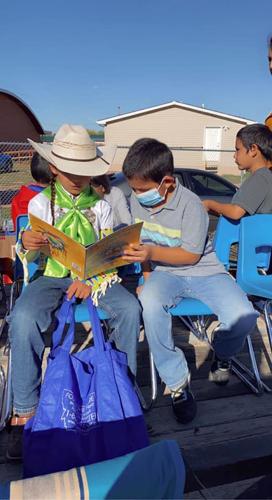 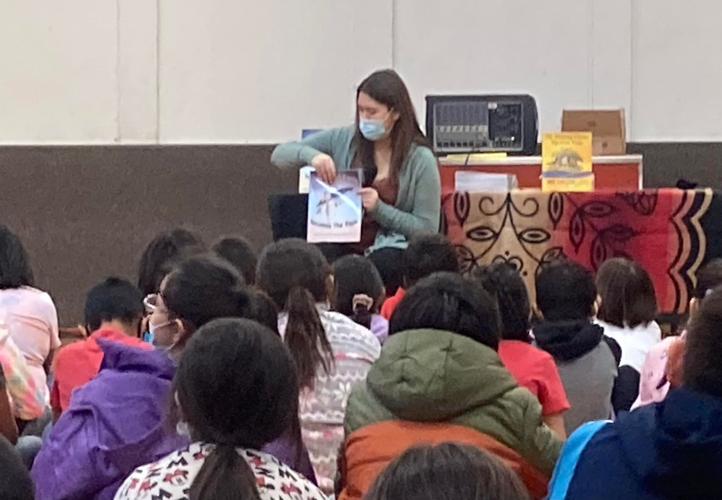 Sabrena Half gives a reading of the children's books that she helped author at Crow Agency Public School.

Two people have started appearing on shelves in some of Montana’s schools, libraries and book stores: Lily Good Path her cousin Elk Morning, both of them Crow children.

The two Apsáalooke kids are part of a series of children’s books produced by former students at Montana State University Billings. The books showcasing the stories of Lily Good Path and Elk Morning join several others recently produced by Crow men and women.

“We’re doing this because these books will teach children about our culture, and our culture is pretty rich,” said Sabrena Half, a Crow woman and MSUB graduate who helped author all four books.

Starting in 2016, Half and other members of the American Indian Business Leaders club at MSUB entered a national competition. The organization, whose clubs throughout the country try to cultivate business professionals and entrepreneurs among Indigenous college students, hosts an annual business plan competition. The team from MSUB took home the first place prize, and their plan centered on Lily Good Path.

The group subsequently formed Bakaate, LLC., “bakaate” being the Apsáalooke word for children, in order to publish its first book. The company took home the Athena Award when it competed in the annual John Ruffatto Business Startup Challenge held at the University of Montana in Missoula.

Bakaate has published three books about Lily Good Path. She transforms into a different animal in each book: a bear, an eagle and a buffalo, each animal assisting her tribe. The character was created by the club with the aim to tell stories with the arching themes of caring for the earth and respecting all cultures.

Bits of autobiography are woven into the narratives, with characters getting their Indian names from the authors and their families. Children who grew up in and around the Crow Nation will also see familiar landmarks, like the Pryor, Crazy and the Big Horn mountains. The artwork for the first three stories came from MSUB marketing professor and club advisor A.J. Otjen, who also assisted in writing.

“I dusted off my pencils because I was the advisor…It was incredibly collaborative,” Otjen said.

The fourth installment in the series focuses on Lily’s cousin, Elk Morning. Since the first Lily Good Path book, its creators had wanted to find a way to add their new character to the Montana Office of Public Instruction’s Indian Education for All curriculum.

The curriculum requires that books provide specific details about the tribal nations that fill Montana, and lesson plans are currently being accepted by OPI centered on Morning Elk. Public school teachers are obligated by the Montana Constitution to teach students about the history, culture and heritage of the state's first inhabitants.

“Elk Morning Counts His First Coup,” written by Half, Otjen, and Bessie Stopsatprettyplaces, follows the eponymous Crow child on his quest to steal a rival tribe’s horse and earn his first of four coups. Counting coups, feats of bravery carried out by Crow men for centuries, also consists of touching an enemy, stealing an enemy’s weapon and leading a successful war party. The last Crow tribal member to count all four coups was Joe Medicine Crow, a World War II veteran, tribal historian and the last war chief among all the Plains Indians. The children's book will join the works of Medicine Crow, James Welch and D'Arcy McNickle in being a part of the Indian Education for All program.

Mike Jetty, a specialist at the OPI's Indian Education for All for the past two decades, said the ideal lesson plan will be for students ranging from the first through fifth grades, and plans will be accepted through the end of January. The authors of the book have also sponsored an award for the teacher who submits the lesson plan chosen, a first for program, Jetty said.

"From my perspective, as a Dakota man, I would say these authors counted an educational coup," Jetty said.

The works of local Crow artists fill the pages of the book. Those artists include Zachary Dean BirdFarway, Larry Big Lake and Salisha Old Bull.

“Right now, we’re focusing on this book, and getting it into as many places as possible,” Half said.

Crow Agency Public School has purchased copies of all four books, and hosted Half for readings of the stories. Also in September of 2021, the Billings Public Library received 18 picture books produced by the Crow Language Consortium and the Language Conservancy. All 18 books are written in the Crow language, and contribute to the tribe’s efforts to preserve their native language.

Those interested in picking up any of the books featuring Lily Good Path and Elk Morning can find them at the House of Books in Billings, or on the bookstore’s website at https://thishouseofbooks.indielite.org/.

The Indian Adoption Project started in 1958 and evolved to include 50 private and public placement agencies across the United States and Canada. During the next 20 years, almost 13,000 Native children would be adopted.

A test of endurance: Although 2021 was rough, The Gazette's top stories weren't all bad news

This was the year we were to leave COVID behind us and get on with our lives. That didn’t happen.

It was a photograph in the Bozeman Daily Chronicle of Finn busking for money to buy a new drum set last summer that caught Clancy Gaworski's attention. He and his wife, Mary, were reading the newspaper when he perked up and announced his plan.

The effort comes as COVID continues to hit Native American people harder than other groups. A CDC report shows that Native Americans are nearly two times more likely to die from COVID-19 than white people.

US announces $83M in latest round of tribal housing grants

The latest infusion — $83 million — will benefit 74 tribes across the country and boost the total amount awarded so far to $209 million spread among 191 tribes.

‘The clinic, it’s going to be the heart of it all’ for Little Shell Tribe

Members of the Little Shell Tribe of Chippewa Indians, the newest federally recognized tribe, will have guaranteed access to health care when their new medical center opens.

Montana has faced many health care challenges existing long before the pandemic, and historically indigenous and rural communities bore the br…

Billings Public Library will host a traveling exhibition designed to teach kids and their families about money, thanks to a competitive nation…

Native educators in the Billings School District are working to engage with tribal elders, especially grandparents who may be the main caretak…

On Monday, the University of Southern California unveiled the new name of one of its most recognizable buildings as the Dr. Joseph Medicine Crow Center for International and Public Affairs.

In a race against extinction, Crow language becomes one of the 'best documented Native languages'

Like many indigenous languages in the United States, the Crow language — or Apsáalooke — is facing the threat of extinction. But a recent expansion of the Crow dictionary seeks to change that.

The event coincides with the release of a new book based on the battle between the Crow and a coalition of warring tribes that nearly eradicated them.

A copy of "Morning Elk Counts His First Coup."

Sabrena Half gives a reading of the children's books that she helped author at Crow Agency Public School.