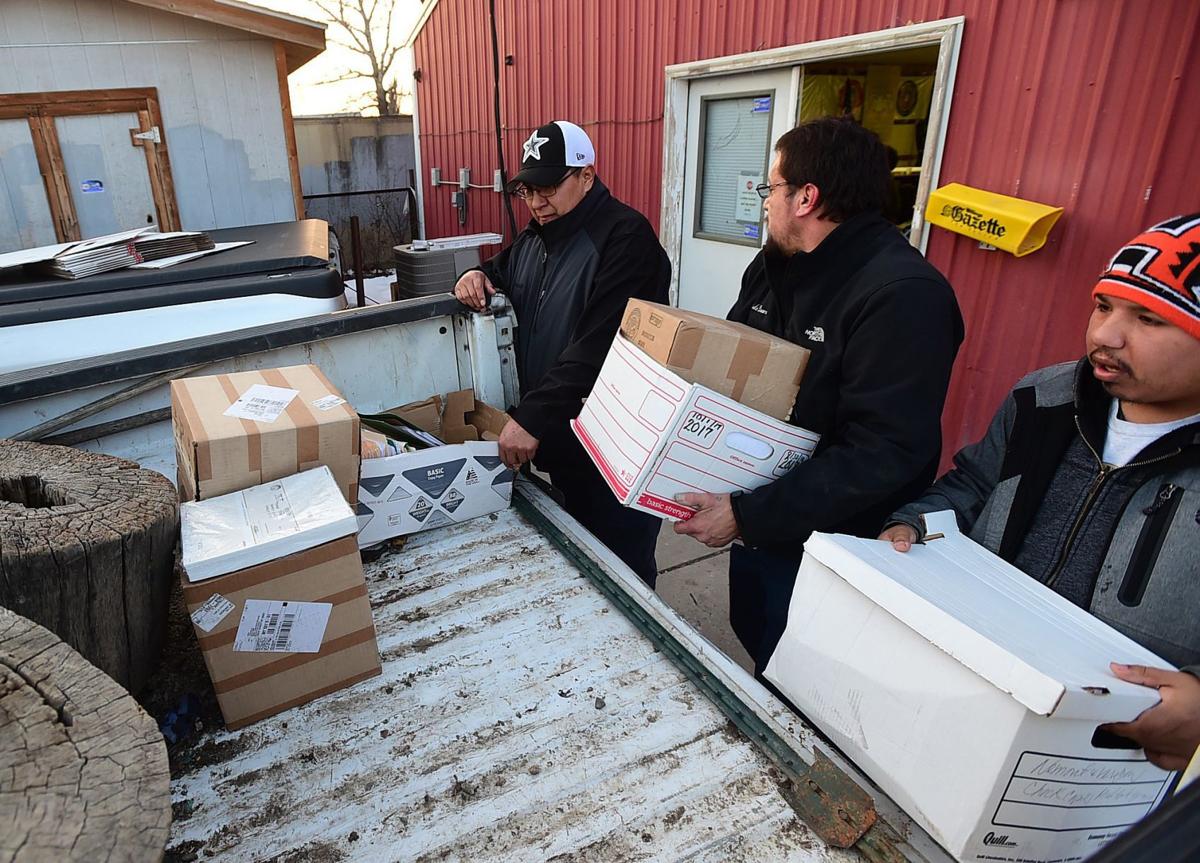 Financial records of the A.J. Not Afraid administration are carried into the legislative building Tuesday as competing factions of the Crow Tribe claim victory in a recent election. 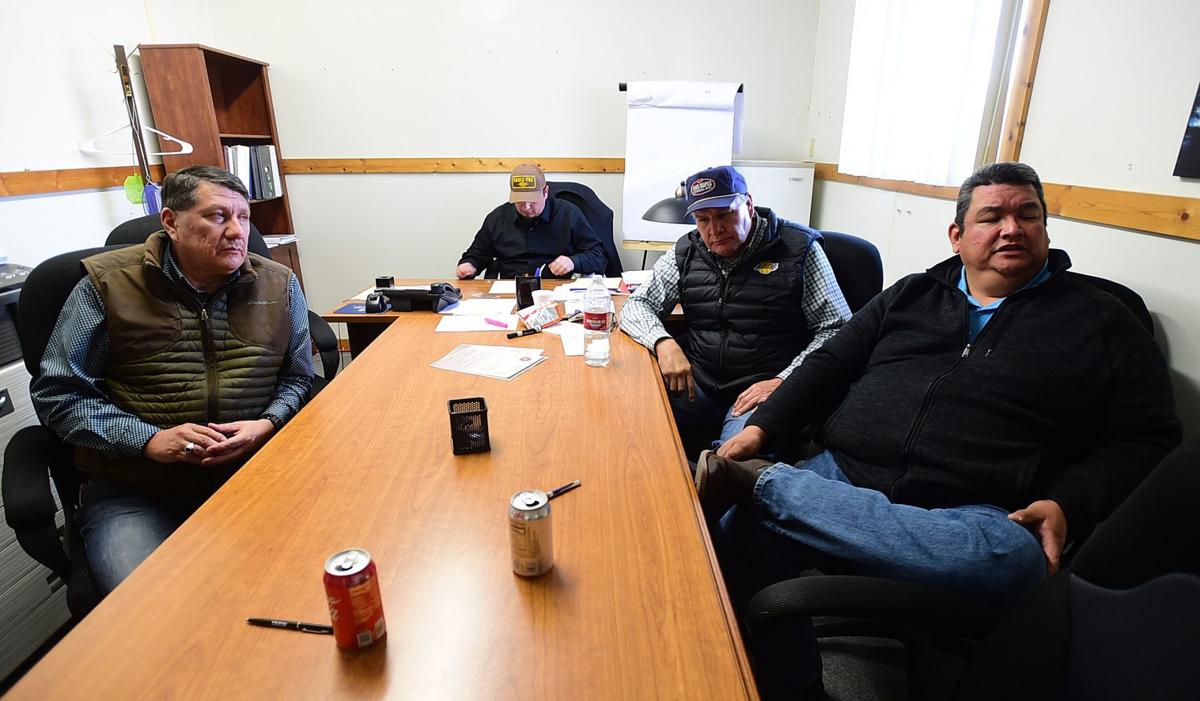 From left, Shawn Backbone, Frank White Clay, Carlson "Duke" Goes Ahead and C.J. Stewart discuss tribal finances as competing factions of the Crow Tribe claim victory in a recent election. Goes Ahead is serving as chairman and Backbone as secretary until a new election March 23. 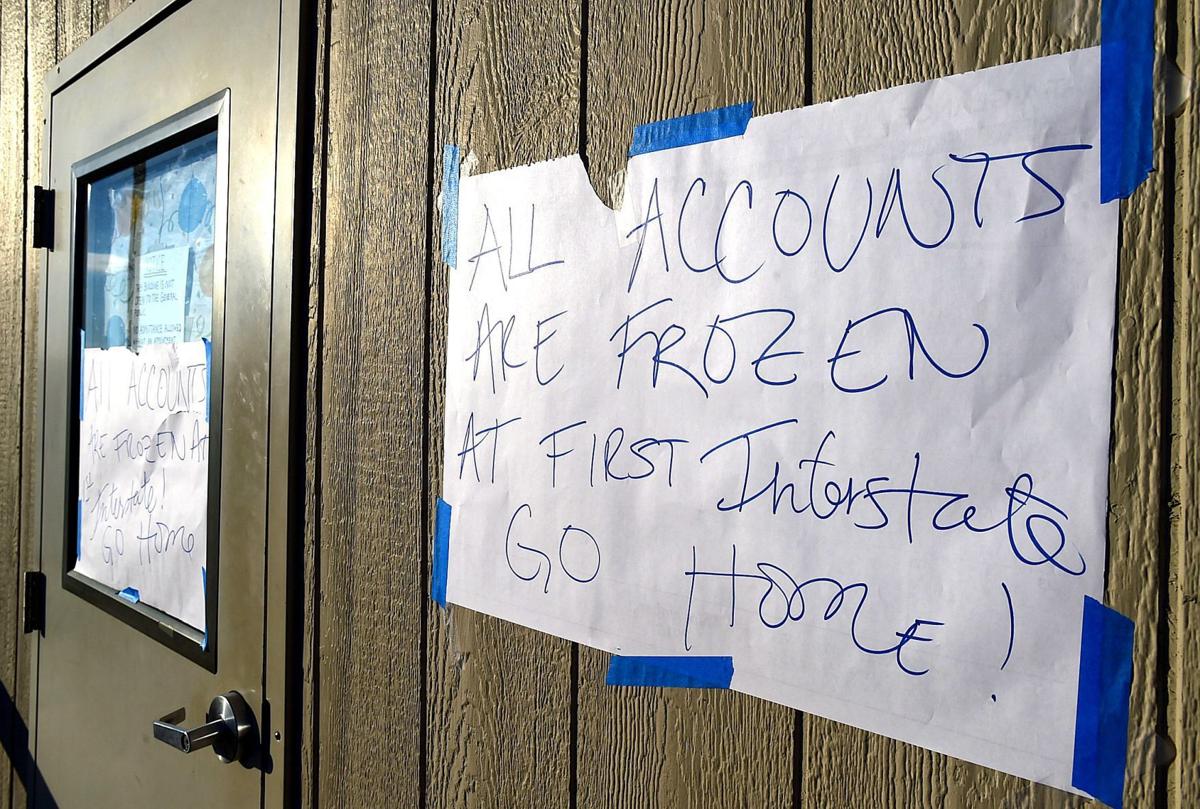 Signs posted on a tribal finances building Tuesday say all accounts have been frozen as competing factions of the Crow Tribe claim victory in a recent election.

CROW AGENCY — The dueling narratives of who now leads the Crow Tribe’s government reached a crescendo Tuesday, when supporters of the tribe’s most recent vice chairman drove off in pickups full of tribal financial documents in defiance of Chairman Alvin “A.J” Not Afraid’s administration, who they maintain was ousted from power in a Jan. 19 recall election.

Not Afraid continued to call the election invalid Tuesday, pointing to a restraining order issued on the eve of the election. Voters in the election, according to then-Vice Chairman Carlson “Duke” Goes Ahead, overwhelmingly opted to remove Not Afraid and the tribe’s secretary, R. Knute Old Crow, from office. They also say the restraining order was invalid because it was not served in time.

Ten days later, the two camps remain split, with both asserting their leadership of the executive branch. In a swearing-in ceremony in mid-January, the tribe’s Legislative Branch recognized Goes Ahead as the new chairman, and former Vice Secretary Shawn Backbone as the new Secretary. A spokesman for Not Afraid said the tribal legislature had no authority to do so.

Goes Ahead and his supporters, along with the legislature, have accused Not Afraid of mismanaging tribal finances during his two years in office. They say monthly checks to Crow elders, paychecks for tribal employees, and other services including garbage pickup have been suspended without explanation from the administration.

On Monday, Goes Ahead said his administration took over the tribal finance office, as part of his effort to begin auditing the tribe’s finances and determining where the missing money has gone. The week before, he had also succeeded in freezing the previous administration’s bank accounts, he said.

“First Interstate Bank and all the folks there have recognized Goes Ahead and Backbone’s signatures to freeze all the accounts so that way we can get the (financial) house in order,” C.J. Stewart, a political adviser to Goes Ahead, said Tuesday.

That process culminated in a confrontation Tuesday afternoon, when Not Afraid's supporters used construction equipment to block pickups loaded with boxes of documents trying to leave the tribe’s finance office. The heavy machinery eventually moved, and the vehicles then were able to head to the legislative branch offices to unload the financial documents.

“They went in and were trying to ransack some of the records,” Not Afraid spokesman Jared Stewart said Tuesday, referring to the Goes Ahead supporters’ takeover of the office.

Not Afraid allowed them to do so, Stewart added, and didn't tell his supporters to try to reclaim the tribe’s financial headquarters. By late Tuesday afternoon, the finance office appeared empty, with handwritten signs taped to the door indicating the tribe’s bank accounts had been frozen.

In a press release, Not Afraid reiterated his administration’s stance that the Crow Tribal Court has formally recognized his continued authority as chairman, as well as Old Crow’s position as the tribe’s secretary.

“The Chairman has asserted that the actions of the Vice Chairman (and) Vice Secretary, through correspondence and conversations in asserting authority as Chairman and Secretary of the Crow Tribe, has caused financial institutions to take unnecessary actions risking the tribe’s financial capabilities to conduct tribal business,” the press release added.

The Bureau of Indian Affairs has not publicly weighed in on whether it will recognize the results of the election. Bureau spokeswoman Nedra Darling said in a Monday email that the BIA has not recognized a new chairman of the tribe. She did not respond Tuesday to a follow-up email or a phone call.

Officials with the Crow Tribe are unable to account for $150,000 it received in a federal grant intended to combat meth addiction on the reser…