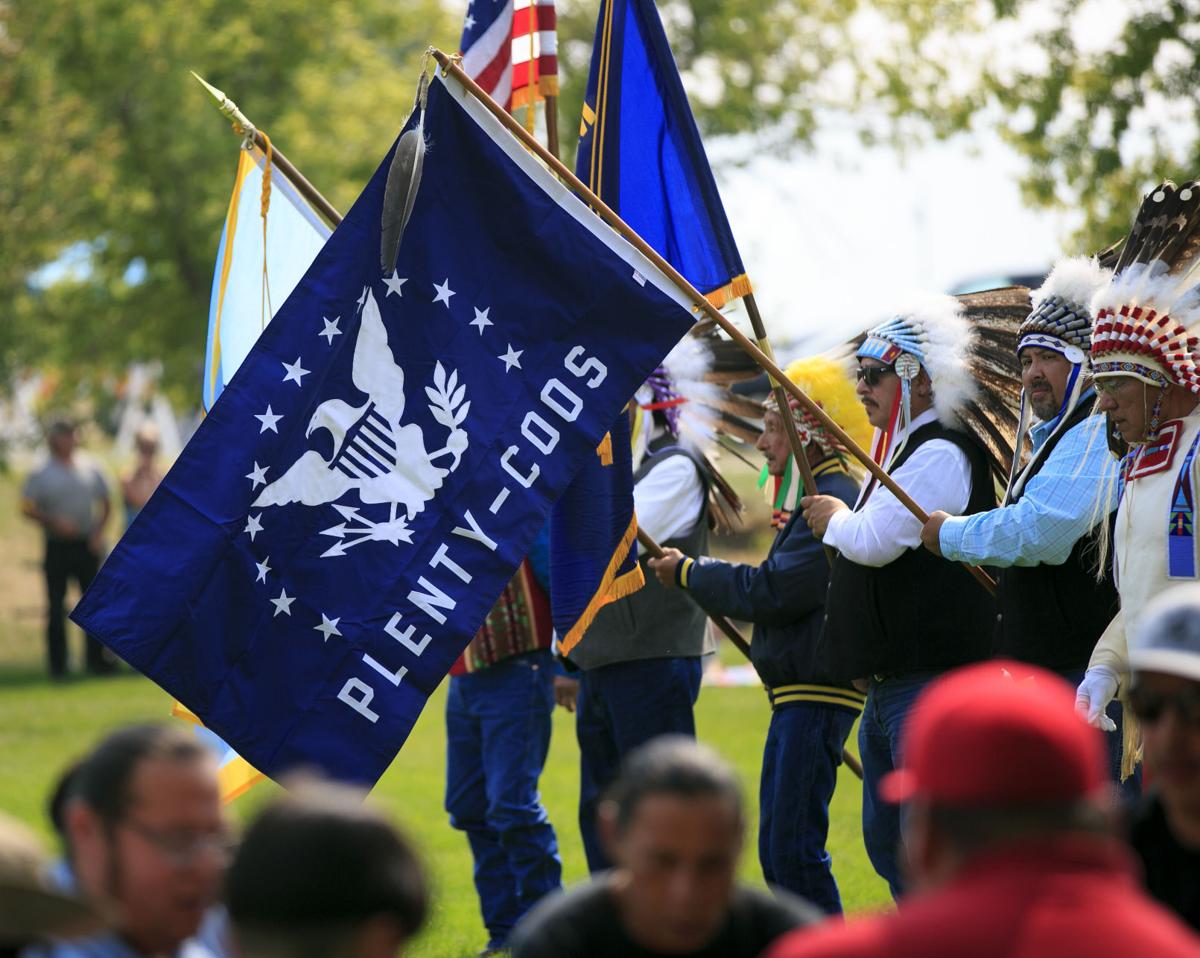 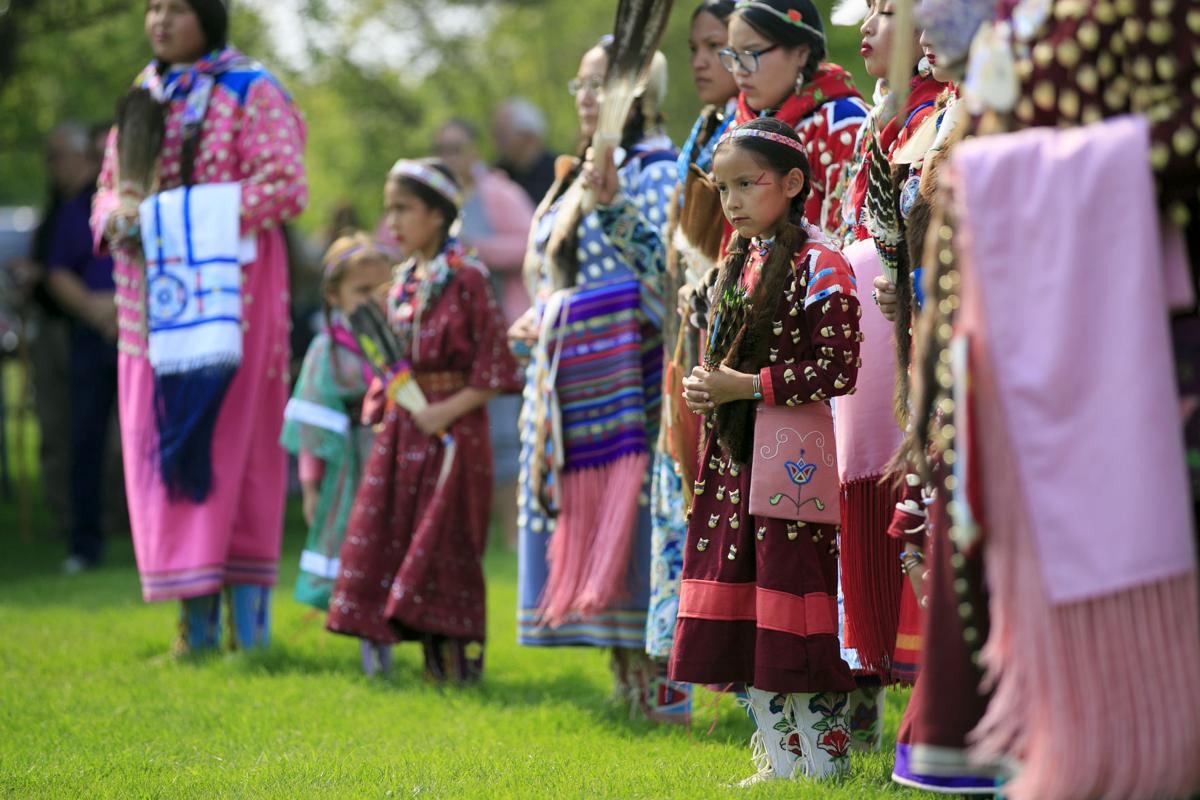 Dancers pause for a presentation during the Day of Honor Saturday, Sept. 4, 2021, at Chief Plenty Coups State Park in Pryor. 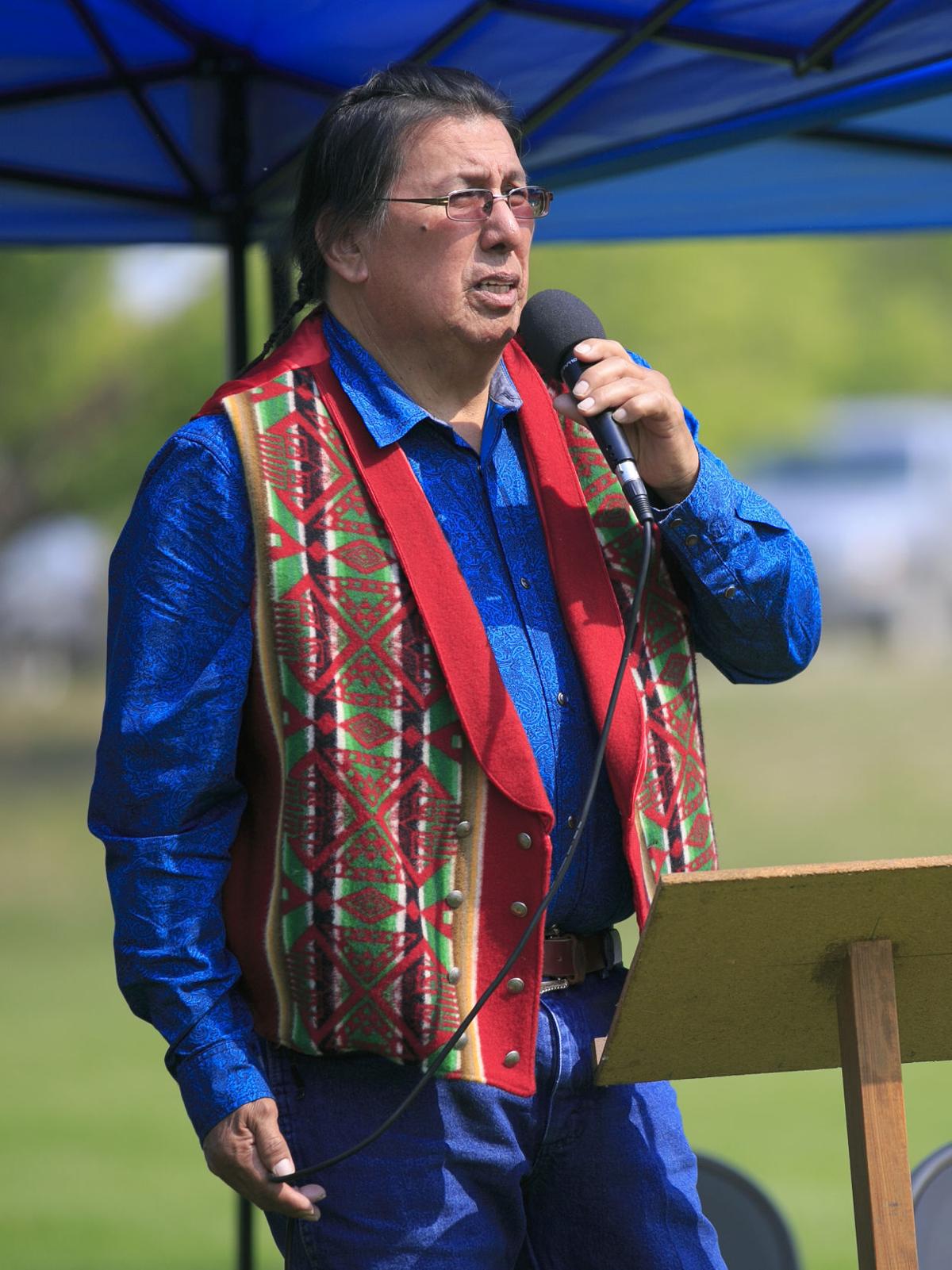 Vincent Goes Ahead speaks during the Day of Honor Saturday at Chief Plenty Coups State Park in Pryor. 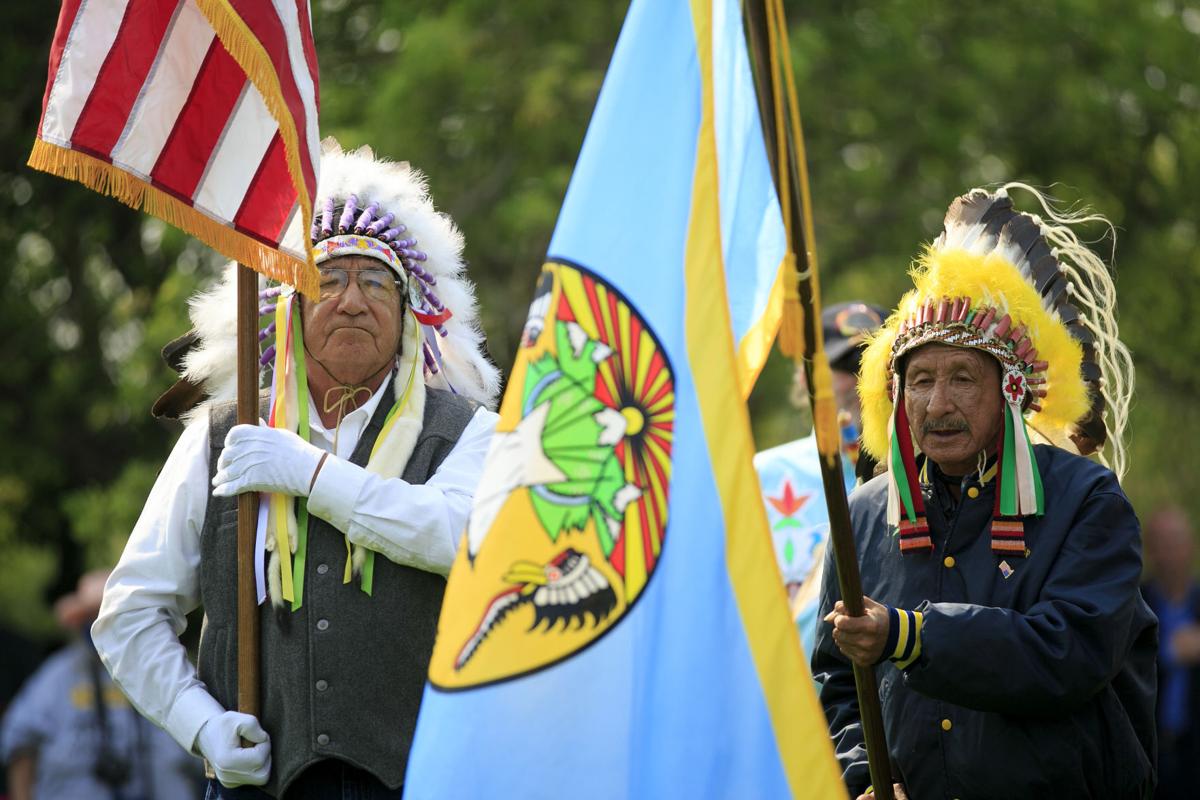 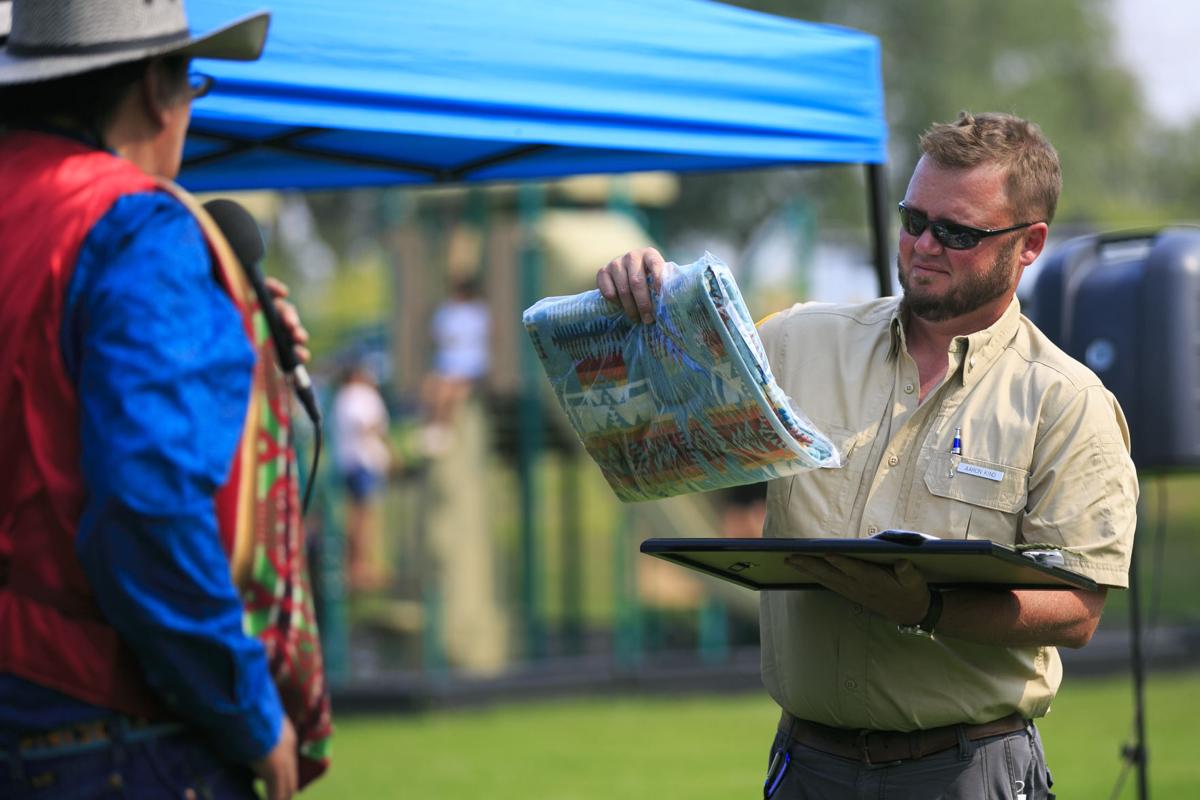 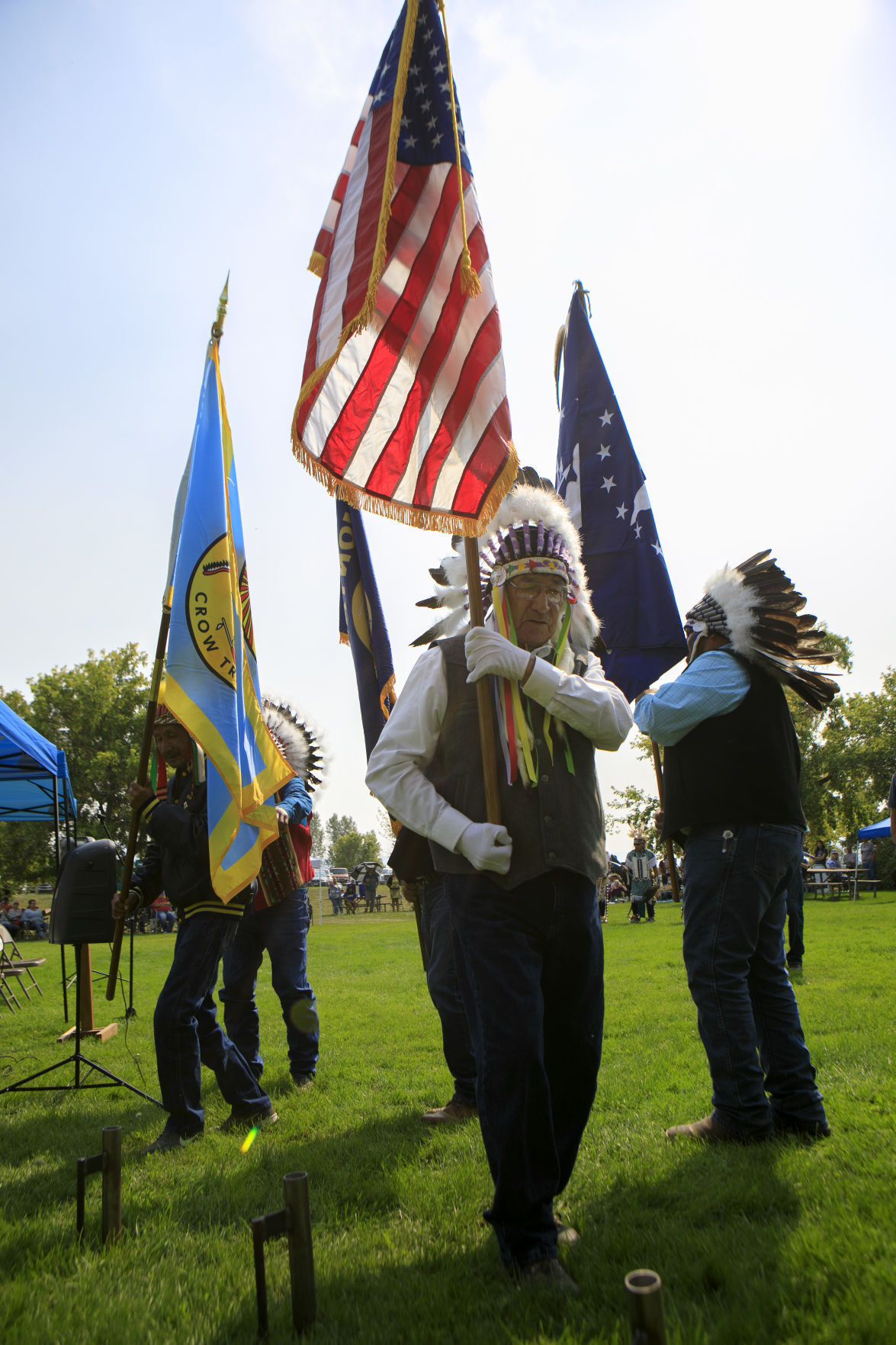 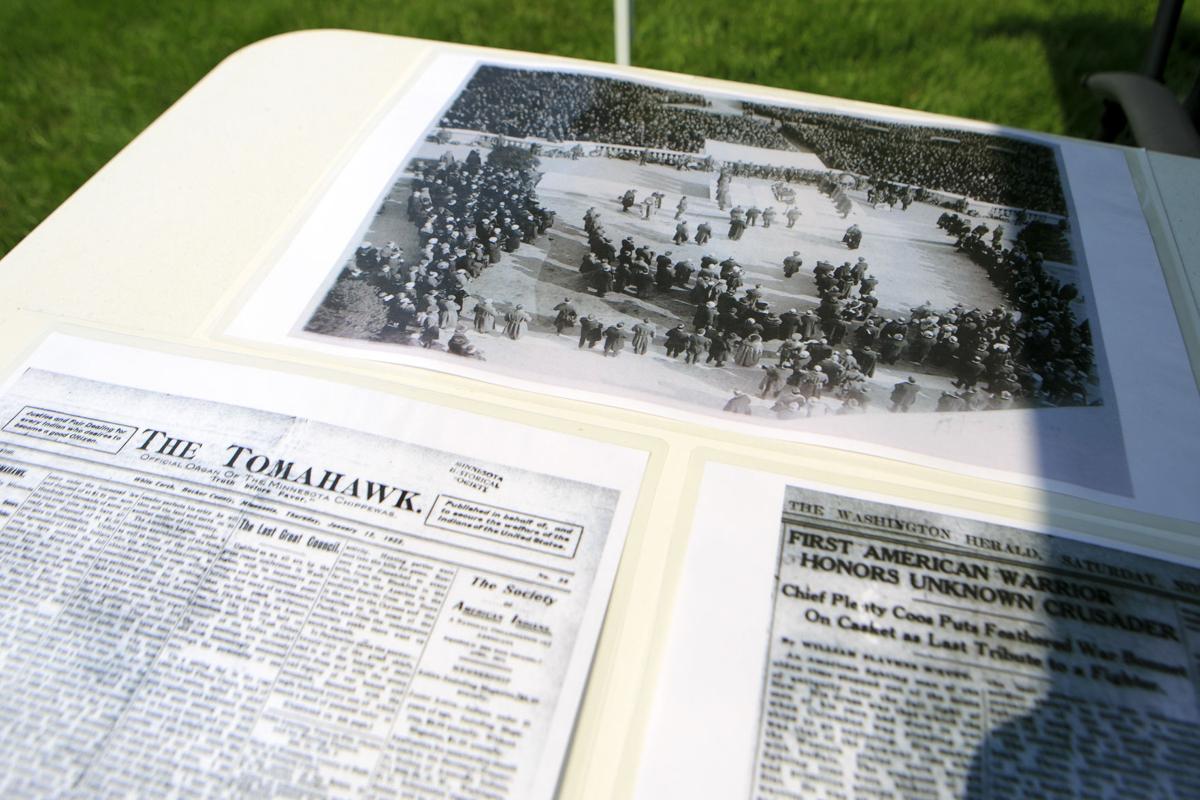 Old newspaper clippings are on display during the Day of Honor Saturday, Sept. 4, 2021, at Chief Plenty Coups State Park in Pryor. 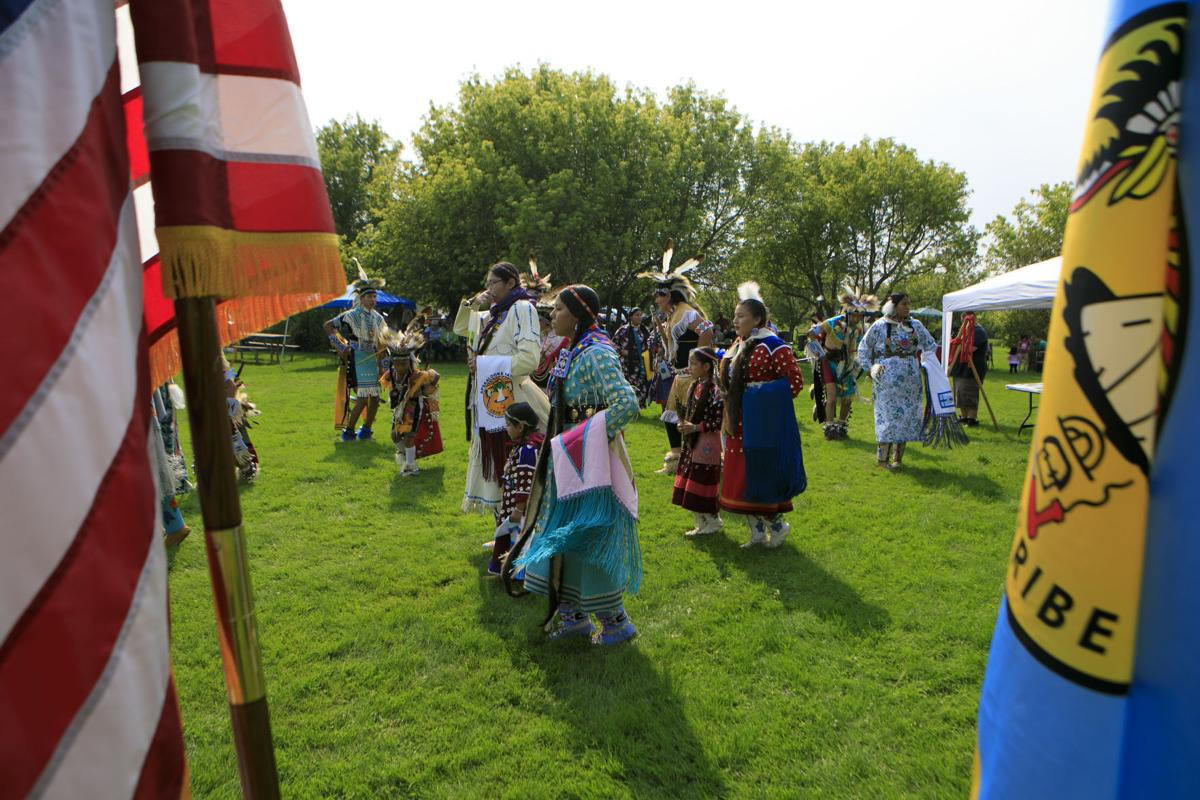 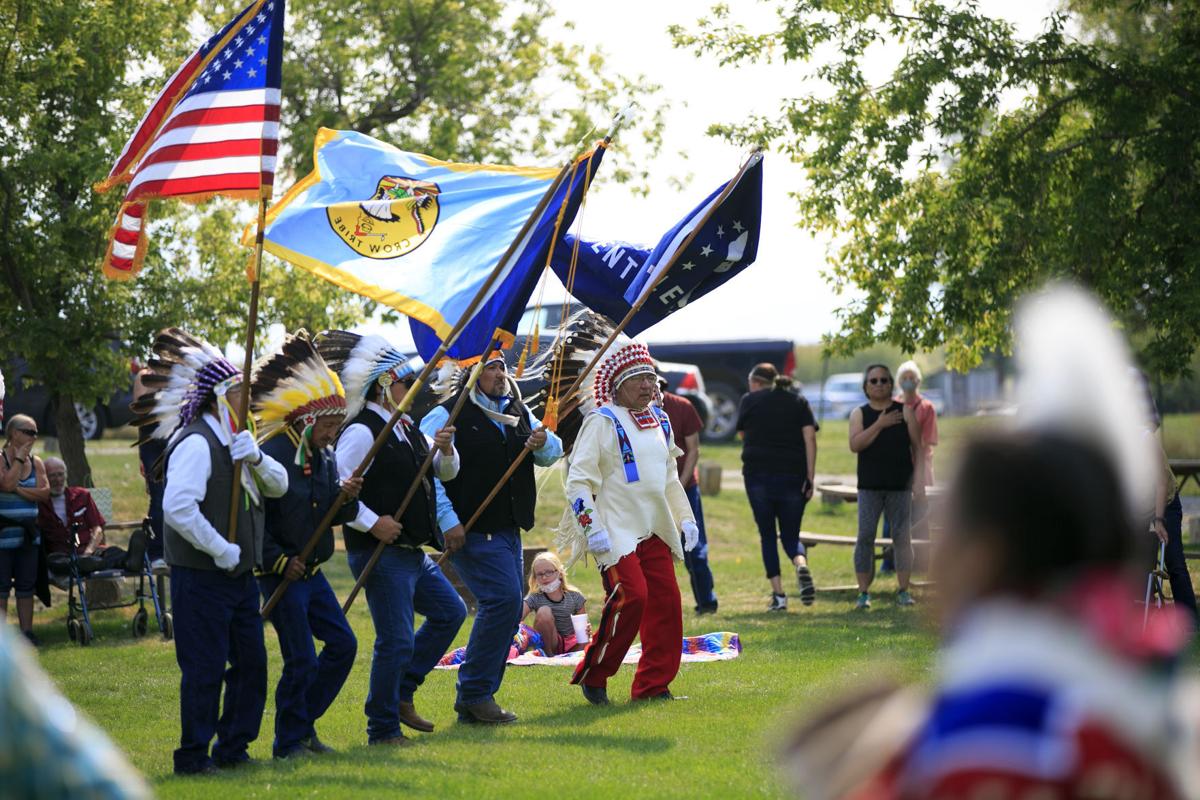 PRYOR — Under a clear sky and with a light breeze, four flags led the opening ceremony for the Day of Honor on Saturday at Chief Plenty Coups State Park.

One honored the Crow Nation, one the United States, and one the state of Montana. The fourth bore the name of the man now buried at the state park. In about two months, that same flag will fly at Arlington National Cemetery, commemorating Chief Plenty Coups’ role at the Tomb of the Unknown Soldier 100 years ago.

“The Tomb of the Unknown Soldier, especially having my military background, what it means to me is a lot like standing for the Star Spangled Banner. I get goose bumps. I get overcome with emotion...It’s hallowed ground,” said Elsworth Goes Ahead, a U.S. Marine Corps veteran who has carried the flag since 2017 as member of the Chief Plenty Coups Honor Guard.

Born in 1848 in the area that is now Billings, Chief Plenty Coups lived through the end of the Indian Wars and the subjugation of the continent’s first peoples to forced assimilation and the federal reservation system. He also saw every Indigenous person in the United States finally recognized as a citizen in 1924. He died on his allotment near Pryor, where his log cabin, and the cottonwood and apple trees that he planted still stand.

Plenty Coups became a chief before he reached 30. When clashes erupted between the tribes of the Great Plains and white settlers, Plenty Coups became a scout for the U.S. military. Cooperation with the federal government, he would later say, was the only way for the Apsáalooke people and culture to survive. He would be last traditional chief of all three Crow bands.

Plenty Coups spent years in negations with federal authorities. He dealt with at least seven different presidents, said Vincent Goes Ahead Jr., another member of the Chief Plenty Coups Honor Guard who carried the flag before passing it to his nephew. His efforts helped ensure that no Crow person would be pushed off their original land, although it was finally whittled down to a 2.2 million-acre reservation.

“He was a diplomat,” said Goes Ahead Jr.

A portion of Plenty Coups’ allotment became a state park in 1965, and his home is now a National Historic Landmark. Throughout the last decades his life, he farmed and tended to his horses, all the while resisting pressure to sell his allotment. He and his wife, Strikes the Iron, willed 189 acres of his land to the trust of Big Horn County, intending for it to be a memorial to the Crow Nation and a token of Plenty Coups’ “friendship for all people, both white and red.”

“Being the visionary that he is, he was definitely ahead of his time with his transition from nomad to war chief to farmer,” Elsworth Goes Ahead said.

Plenty Coups traveled to Washington D.C. in 1921, three years before the Native Citizens Act and three years after thousands of Indigenous men and women had already enlisted to serve in the U.S. military during World War I. It was Nov. 11, then known as Armistice Day, and President Warren G. Harding had invited him to represent all the tribes in the United States. He gave a prayer for the soldier, and left behind his war bonnet and coup stick.

Inside the tomb were the remains of an American soldier killed while fighting in France. He was chosen to represent every U.S. service member who lost everything fighting in Europe.

“Even their own identity,” said Gavin McIlvenna, the president of the Society of the Honor Guard for the Tomb of the Unknown Soldier.

McIlvenna, who spoke Saturday as part of the day of honor, retired from the U.S. Army after serving 23 years. A portion of that time was spent as the relief commander and assistant sergeant of the guard at the Tomb of the Unknown Soldier. In the months leading up to the tomb’s centennial commemoration, McIlvenna will be coordinating with other non-profits and agencies, both in the U.S. and overseas, organizing a series of events leading up to Nov. 11 of this year.

“Chief Plenty Coups taking his war bonnet off and presenting it to an American who he didn’t know, that’s powerful. That says a lot, and it really ties the Crow Nation to that warrior who’s buried on the plaza,” he said.

Elsworth Goes Ahead will take a copy of Plenty Coups’ flag to Arlington in November. When that flag comes back to Montana, he said it’ll be in a safe for most of the next 100 years, when the tomb’s bicentennial is commemorated.

"Carrying the flag, it's less of a responsibility and more of a way of life," he said.

The Chief Plenty Coups Honor Guard is accepting donations to help cover the cost of their visit to Arlington National Cemetery. Those interested in donating can find more information on the honor guard’s Facebook page.

A tool of resistance: One Crow man used his boarding school education to save his culture

During his hundreds of hours of study at Carlisle Indian School, George Washington Hogan forged a weapon that the Crow chiefs back home didn’t have. That was a white man’s education.

To save the old trees, portions of their limbs will be cut off in the fall and grafted onto 10 root stock trees planted next to Ekalaka’s Central Schoolhouse.

The Crow and Northern Cheyenne tribes have upped precautions in the wake of a rise in COVID-19 cases both on and off their reservations.

The Census had Carter County adding 255 people, or a 22% increase, in the past decade, pushing the population to 1,415. The thing was, Clerk and Recorder Pam Castleberry wasn’t sure she could come up with 255 new residents.

Nonprofit Dream Flights is offering free flights to WWII vets in its fleet of Boeing-Stearman Model 75 biplanes through the end of next month to honor the 80th anniversary of the attack on Pearl Harbor.

CHEYENNE, Wyo. — When news came that a 20-year-old Wyoming soldier was one of the last casualties of the two-decade-long U.S. war in Afghanist…

'A big cumbersome beast': The rising cost of caring for veterans

“Their only lifeline is the VA, and obviously it’s not working."

Jestin Dupree, who served for 16 years as an infantryman, will be one of 15 people on the recently launched VA Advisory Committee on Tribal and Indian Affairs.

Tuesday ended with a mound of flowers left at the Tomb of the Unknown Soldier in Arlington National Cemetery, placed there by a procession com…

Dancers pause for a presentation during the Day of Honor Saturday, Sept. 4, 2021, at Chief Plenty Coups State Park in Pryor. 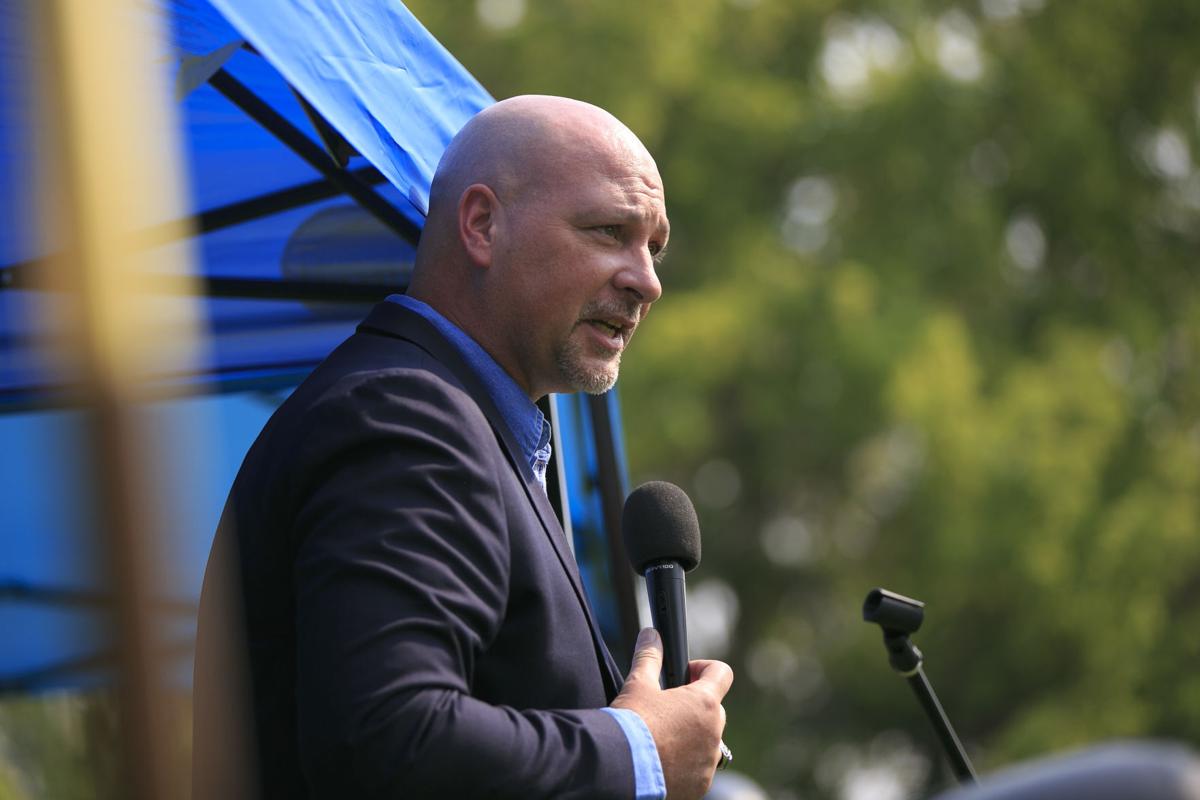 Gavin McIlvenna, from the Society of the Honor Guard, Tomb of the Unknown Soldier, speaks during the Day of Honor Saturday at Chief Plenty Coups State Park in Pryor.

Vincent Goes Ahead speaks during the Day of Honor Saturday at Chief Plenty Coups State Park in Pryor.

Old newspaper clippings are on display during the Day of Honor Saturday, Sept. 4, 2021, at Chief Plenty Coups State Park in Pryor.