HINSDALE — A 76-million-year old animal rose from a sandstone coulee through a curtain of dust kicked up by the two thundering propellers of a Chinook helicopter.

A 9,000-pound chunk of rock dangled from the helicopter. The fossilized remains of a tyrannosaur were curled inside the rock, frozen in a geological snapshot of the late Cretaceous Period. The Chinook guided the fossil to a flatbed truck, finishing the first part of its journey to the Badlands Dinosaur Museum in Dickinson, North Dakota.

“It’s a big one,” said paleontologist Denver Fowler, curator for the museum, as he stood next to the flatbed on a recent October Saturday. Fowler, along with his wife and fellow researcher Liz Fowler, spent four years uprooting the dinosaur from the prehistoric sediment in Valley County.

Inside the badlands that carve through the prairie of northeastern Montana is a layer of mudstone and sandstone known as the Judith River Formation. The ranches and farmland around Hinsdale were part of a delta on the edge of a great inland sea that split North American in two, stretching from the Arctic Sea to the Gulf of Mexico.

A human walking along the delta 76 million years ago, hypothetically, would see many familiar animals in the water, Liz Fowler said, like turtles, frogs, salamanders and crocodiles. On land, however, the 7-ton duck-billed Brachylophosaurus would be munching on ferns and conifers. The apex predator Daspletosaurus, a relative of Tyrannosaurus rex, would be munching on Brachylophosaurus.

It was probably a half-grown Daspletosaurus, Denver Fowler said, that washed up on the ancient delta. Decomposition set into its curled body, causing its belly to swell with gases. Then, like a whale, its gut exploded. Other than its scattered ribs, the rest of the animal was encased in the sediment that washed over it.

Nature kept the animal buried and preserved while the inland ocean receded, only to slowly unearth it through erosion. Wind and water chipped away at the hill where the tyrannosaur lay, eventually exposing its feet. It was these two feet spotted by Denver Fowler that launched the excavation.

Denver and Liz Fowler, both of whom earned a Ph.D. in paleontology from Montana State University, first came to Valley County in 2016. Their visit to the rugged formations about 60 miles south of the Canadian border came after an error that Liz Fowler spotted at a Bureau of Land Management office in Havre.

“In their lobby they have the jaw of a dinosaur with some nice teeth in it, and it was labeled ‘duckbill’. Liz said, ‘That’s not duck bill, that’s a horned dinosaur,’”

They asked BLM HiLine District Archaeologist Josh Chase where he found the jaw, and he brought them out to Hinsdale. Chase has helped facilitate excavations and research in Montana conducted by the Museum of the Rockies, the Cleveland Museum of Natural History and most recently the Dickinson Museum Center, which houses the Badlands Dinosaur Museum.

The real effort of digging around the tyrannosaur’s feet began in 2018. Over the next two summers, they dug about 10 feet deep into a hillside, and into the soft sandstone beneath the dinosaur’s feet, planting jacks along the way. As they neared the point where the bones lay, their progress came to a halt. Limestone had mixed in with the sediment surrounding the dinosaur, making it close to impossible to break apart into manageable pieces.

In 2019, the excavation team of volunteers and students returned with cement saws. Their diamond blades tore through the thick parts of the rock, leaving a checkerboard pattern over the top of the fossil. Even with the help of the saws, the slab containing the bones still weighed 4.5 tons, and the rough landscape meant that if the dinosaur was going anywhere, it would have to be by helicopter.

The Fowlers, whose experience in excavating ancient animals spans continents, had overseen helicopter extractions before, but never one this large. With wildfires taking priority, they had to wait until late this year to get a Chinook recently acquired by the Billings Flying Service at the site.

To prepare the fossil for the trip to North Dakota, the Dickinson Museum Center commissioned a custom iron frame. A portion of the frame wrapped around the slab containing the dinosaur, and another sat on the truck. On the day of the extraction, the Chinook pilots hovered over the flatbed while a small team on the ground held onto ropes that dangled from the framed Daspletosaurus. After a few corrections, the rock fell into place as snug as a 10,000-pound puzzle piece.

Over the next two to three years, experts will break away the stone with air chisels, and scans of the fossilized bones will reveals its age and give paleontologists insights into its evolution. Because Denver Fowler spotted the tyrannosaur on public BLM land, there will be no dispute over where it will go or who will get to see it.

Stan, a 39-foot-long Tyrannosaurus rex was found in 1987 and excavated outside of Buffalo, S.D. in 1992. At nearly 70% complete, dozens of casts have been made of Stan that fill museums worldwide. The fossil remained the property of the Black Hills Institute, a private corporation, until 2020. Stan was sold to an anonymous buyer for roughly $32 million, making it the most expensive fossil ever sold and potentially closing off any future research that paleontologists had planned for the 66 million-year-old T. Rex.

In the United States, all fossils on public lands have to be excavated through permit. Once they’re out of the ground, they have to remain in the public trust by going to federal repositories, such as the Museum of the Rockies or the Dickinson Museum Center.

BLM lands in Montana contain both paleontological sites that date back to the Cretaceous Period, and culturally significant Indigenous sites like buffalo jumps that date back more than 20,000 years. Fowler said digs on public lands act as a kind of buffer against commercial paleontology, which drives private landowners to take fossils found on their property to the auction block.

“There’s no real substitute for people who really know what they’re doing, like being able to identify fragments and tell species from a tiny fragment. Being able to tell the rib bone of a giant animal from the leg bone of a tiny animal,” he said.

Biden says there won't be a gov't shutdown Friday

Biden says there won't be a gov't shutdown Friday

Ashli Blain never intended to become internet famous. But a few viral Facebook posts have landed her on national news, the possibility of appe…

Every time Cliff Manuel talks about the amazing dinosaur fossils that have been unearthed near his Shell, Wyo., home, his wife, Row, makes him…

The ‘indescribable’ fun of digging dinosaurs in Utah

In a region of Montana known for a 1960s fossil discovery that forever altered paleontologists’ concepts of dinosaurs, Michael D’Emic may have…

'Montana is a hotbed for T. rex,' but researchers are unsure if partial dinosaur skull is one of them

Does the partial skull of a dinosaur unearthed this summer, north of the Eastern Montana town of Jordan, belong to a young Tyrannosaurus rex, that huge meat-eating dinosaur that has fueled many dark dreams, or a Nanotyrannus, a smaller, more nimble species?

Montana is one of only two states where Kristin Chenoweth hasn't performed, and she'll check it off her list Sunday at the Alberta Bair Theater in downtown Billings.

The size of the lease sale will be much smaller than industry, and state leaders, hoped for. 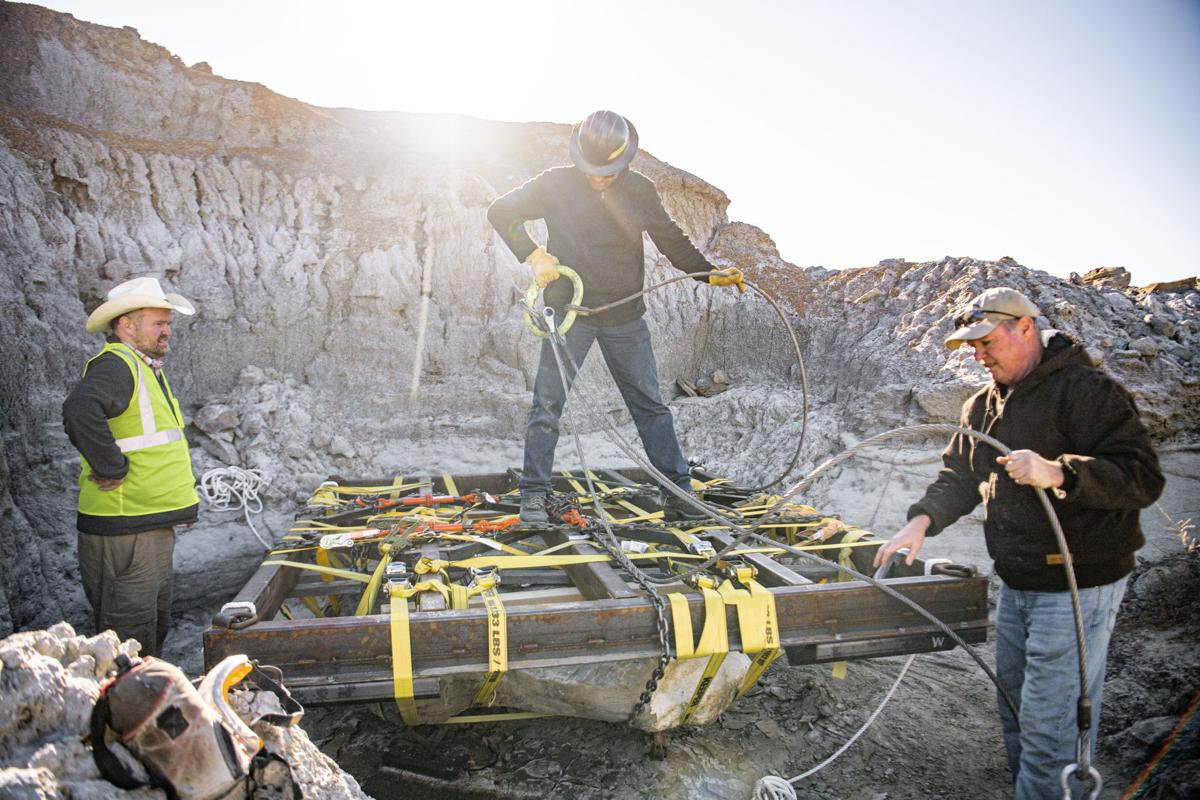 Paleontological researcher Denver Fowler and BLM Hi-Line District Archaeologist Josh Chase along with the help of Billings Flying Service secure chains on a frame containing a nearly complete tyrannosaur fossil. The approximately 13,000 pound fossil was airlifted via helicopter from the Judith River Formation in northern Valley County on Saturday, Oct. 16, 2021. 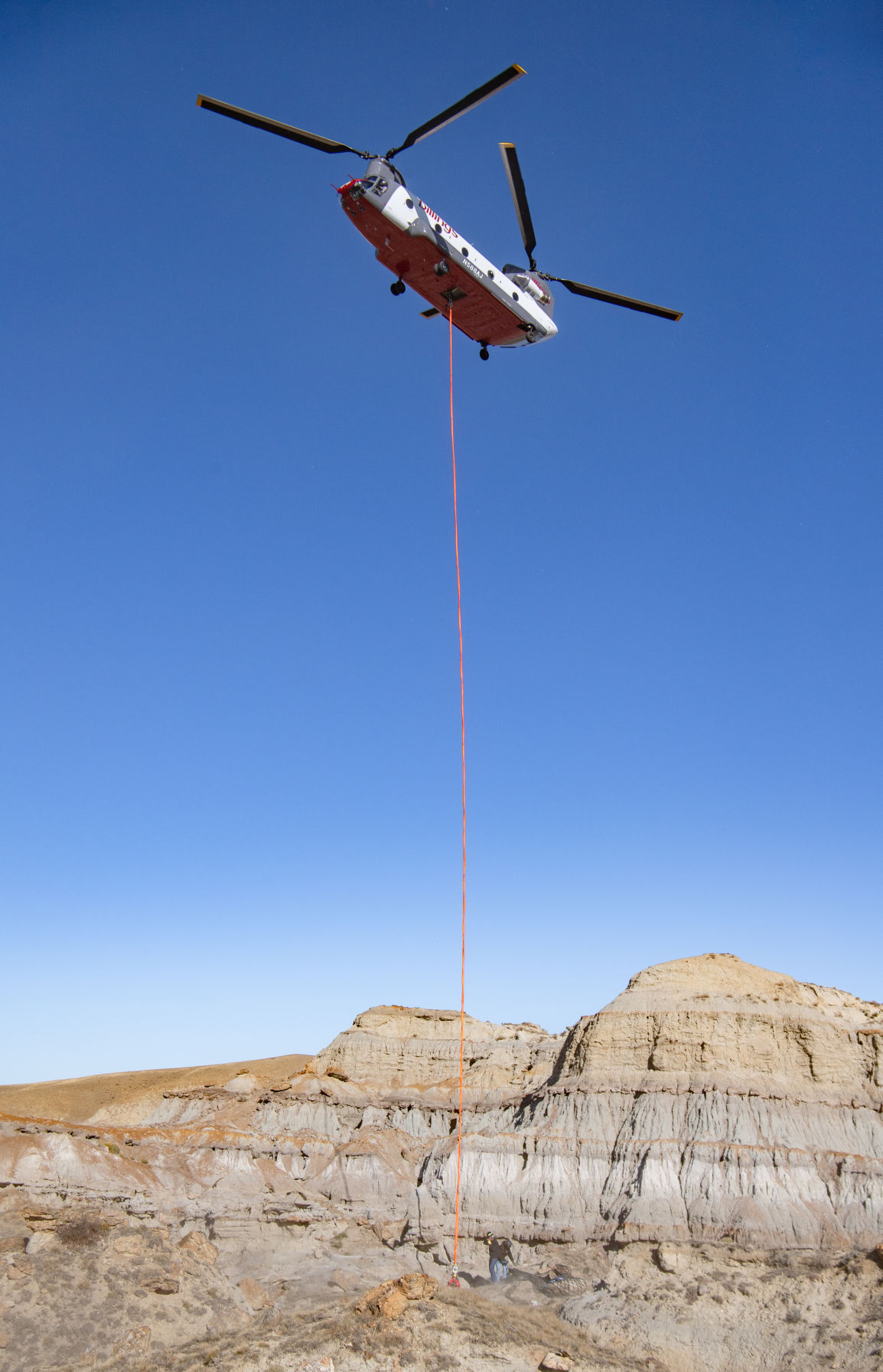 Billings Flying Service airlifts a series of fossils via a Chinook helicopter in northern Valley County on Saturday, October 16. Paleontologist Denver Fowler, along with his wife and fellow researcher Liz Fowler, spent the past four years uprooting the dinosaur from the prehistoric sediment of the Judith Basin Formation. 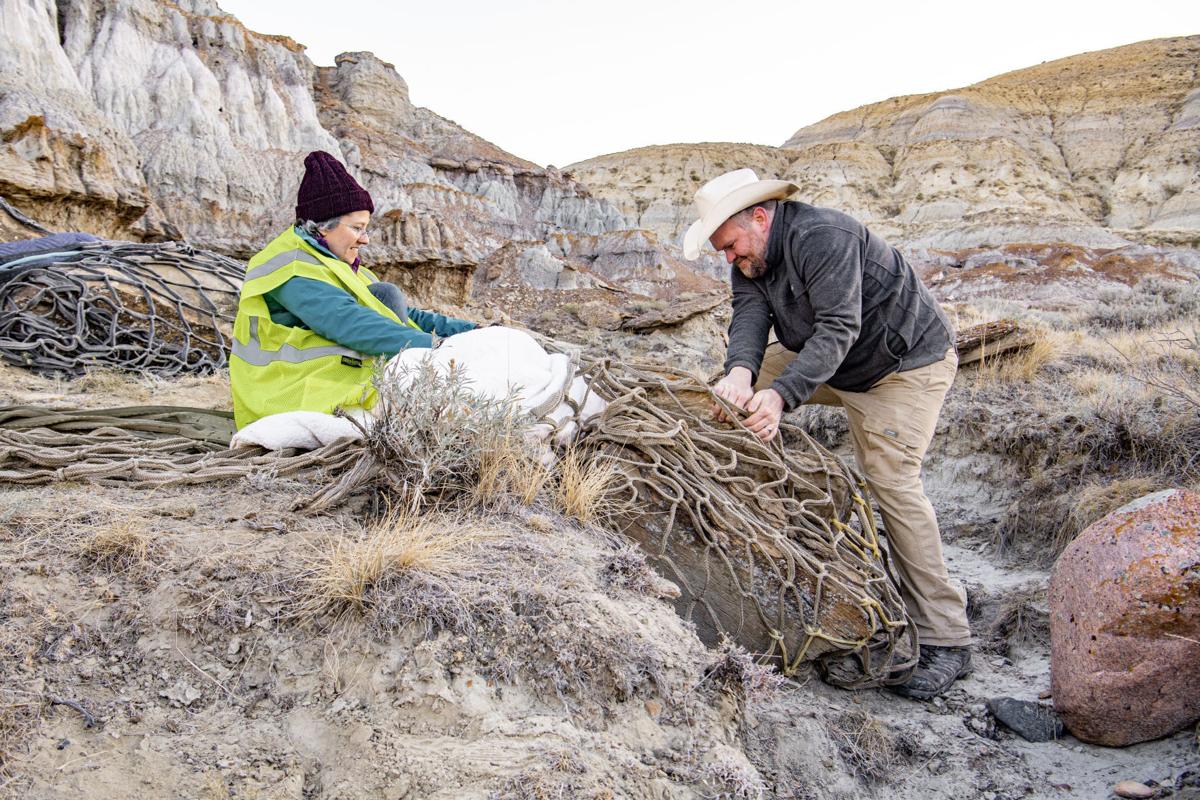 Paleontological researchers Denver and Liz Fowler prepare fossils for airlift. The fossils were airlifted via helicopter from the Judith River Formation in northern Valley County on Saturday, October 16. 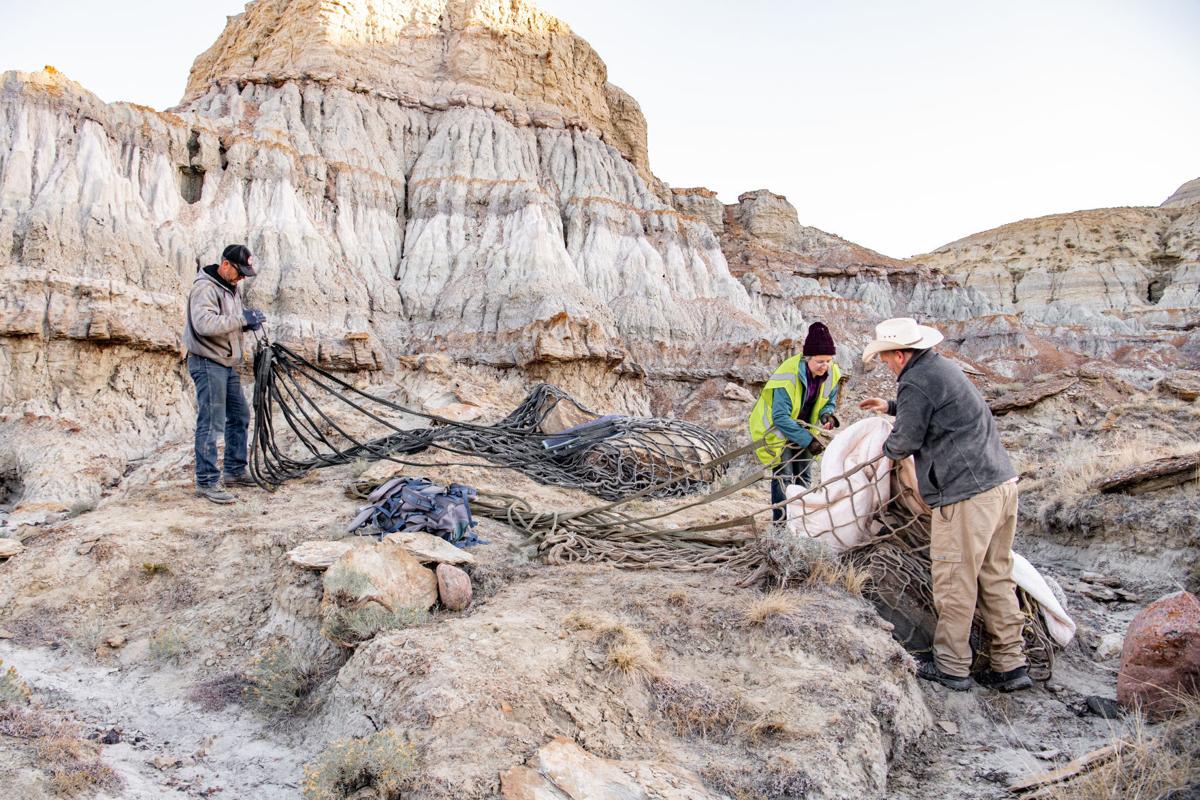 Paleontological researchers Denver and Liz Fowler prepare fossils for airlift, while BLM Hi-Line District Archaeologist Josh Chase attaches a cargo hook to the nets containing the fossils. The fossils were airlifted via helicopter from the Judith River Formation in northern Valley County on Saturday, October 16. 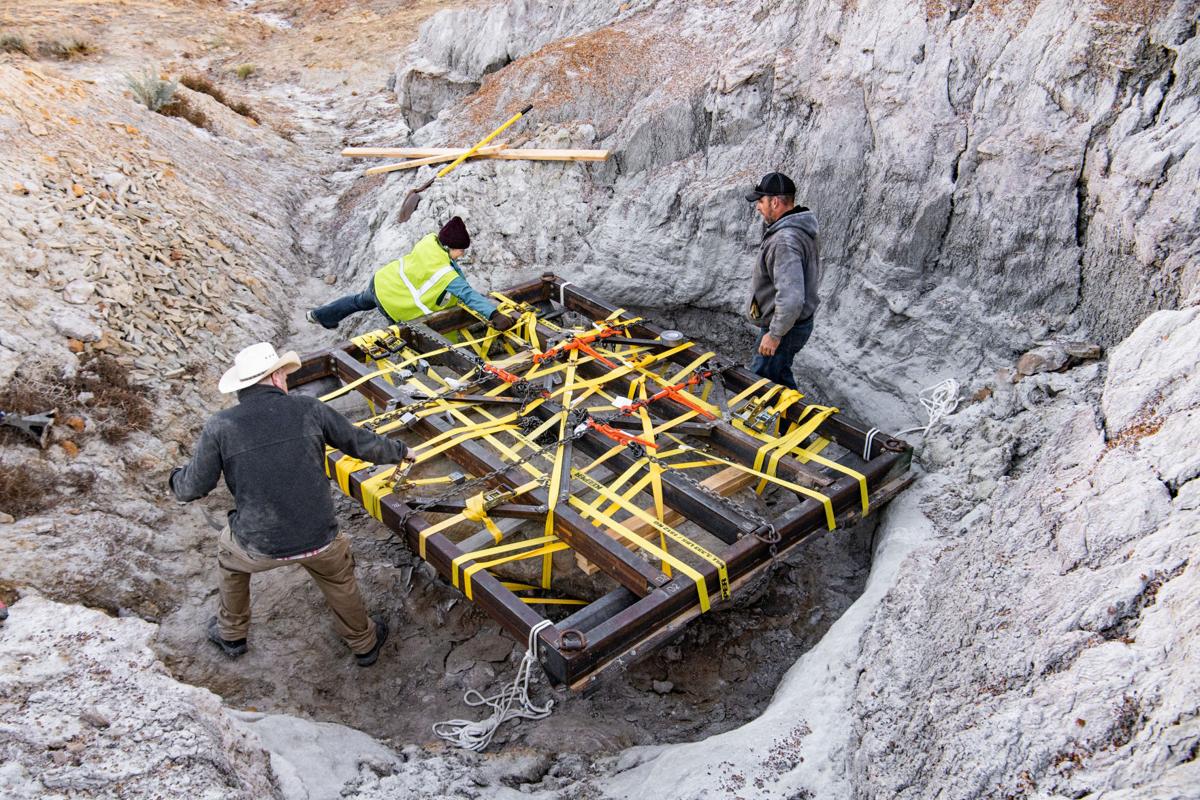 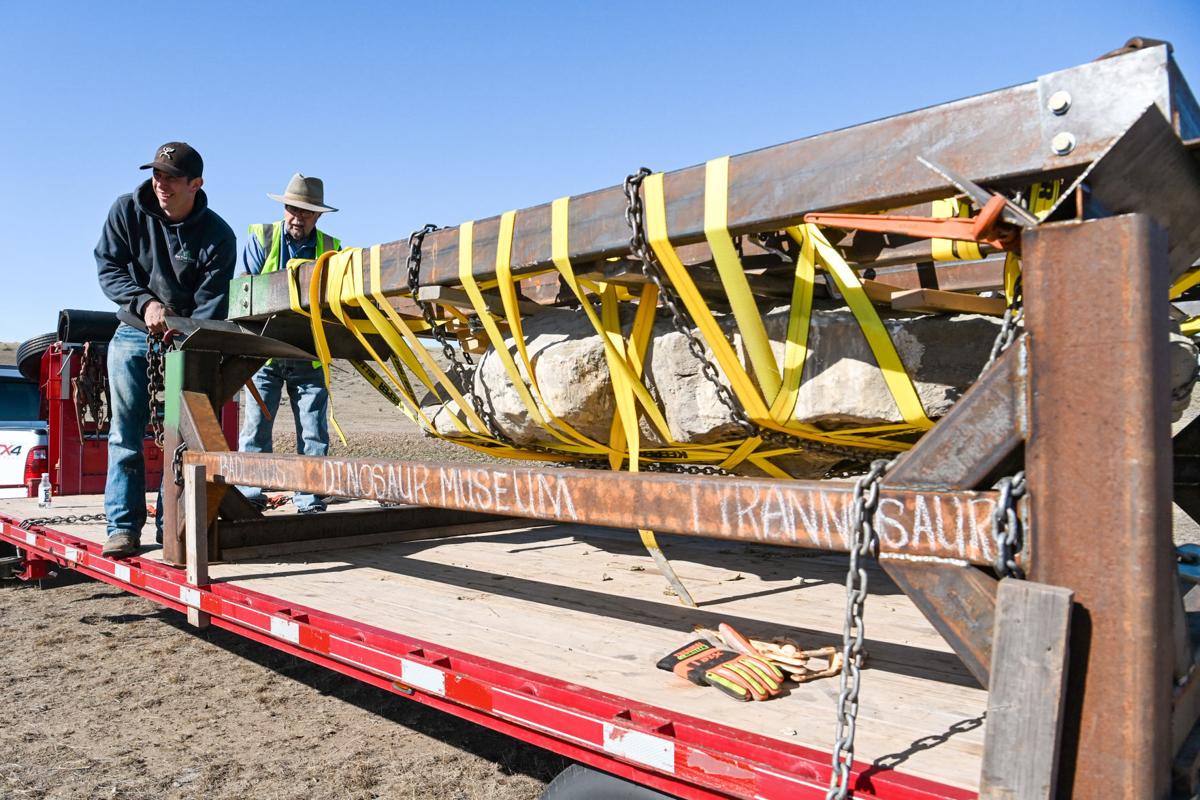 Crews secure a nearly complete tyrannosaur fossil to a trailer in preparation for travel to the Badlands Dinosaur Museum in Dickinson, North Dakota on Saturday, October 16. 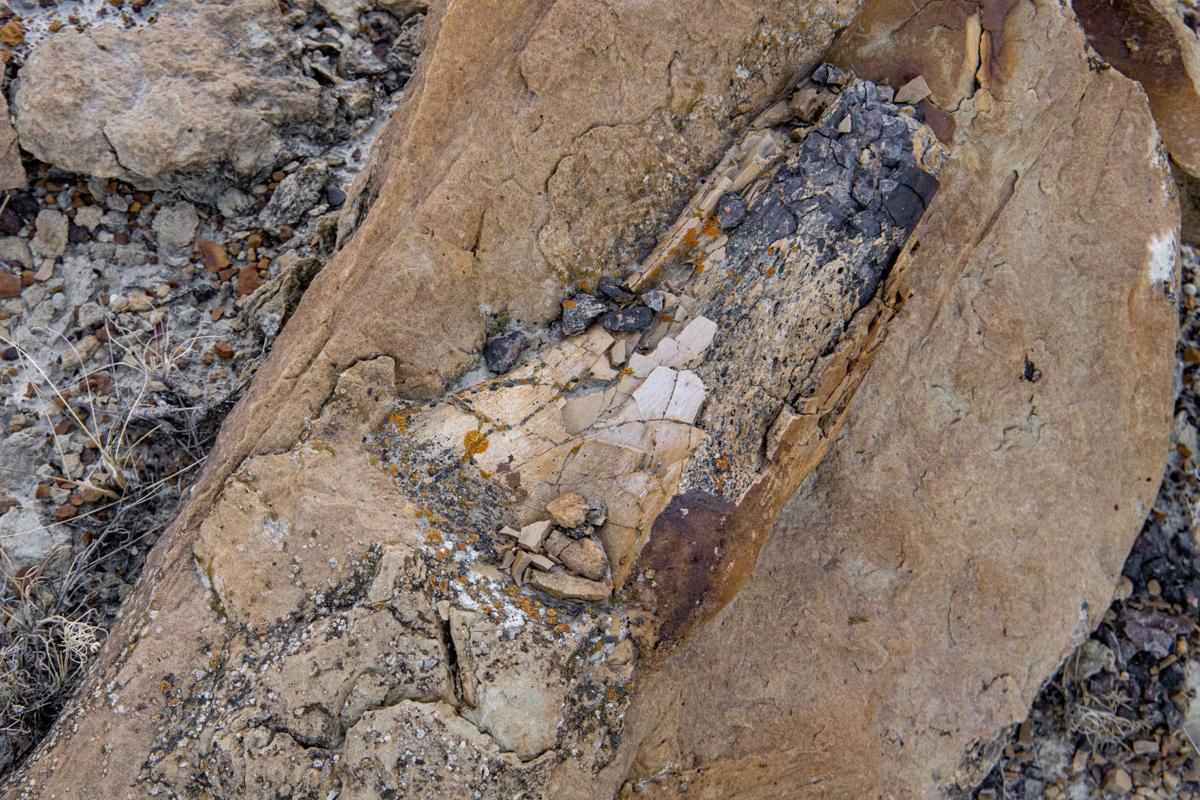 A fossil embedded in rock near the research site in the Judith River Formation in northern Valley County on Saturday, October 16.