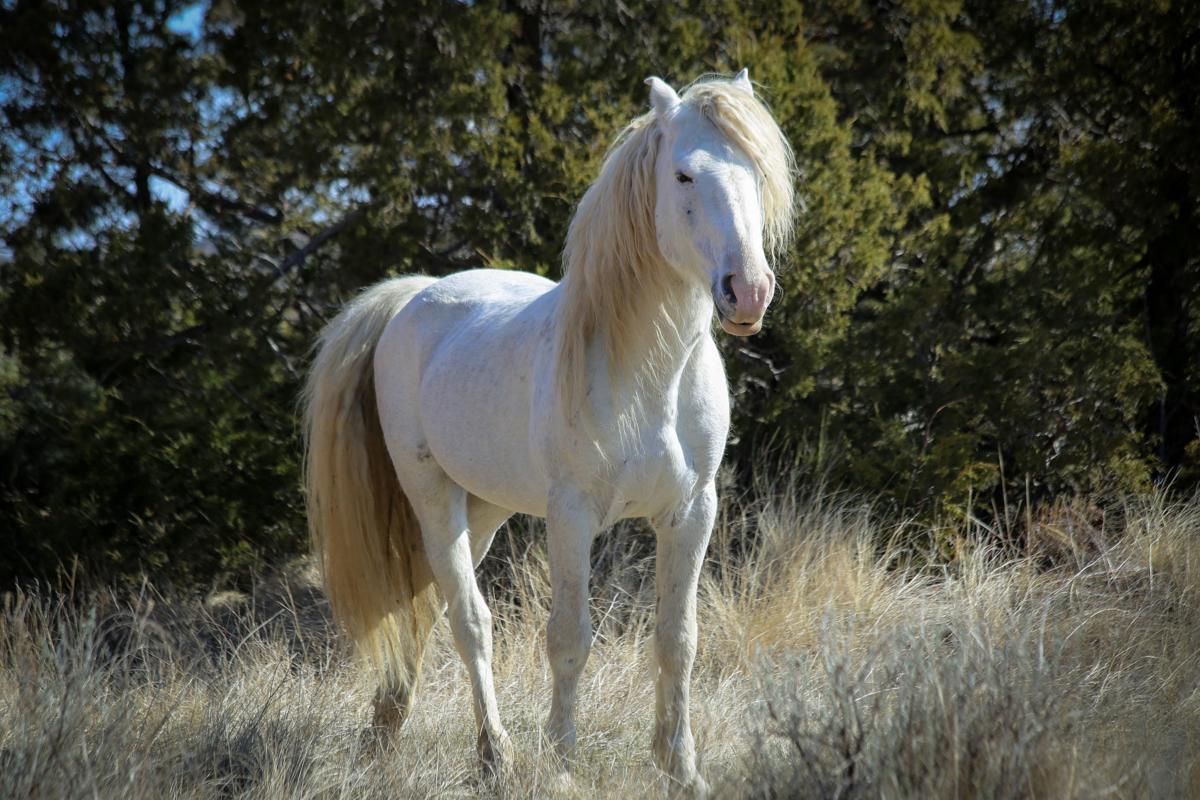 Gray Ghost, a stallion at Theodore Roosevelt National Park, in 2016, shortly after he took over a horse band from another stallion. 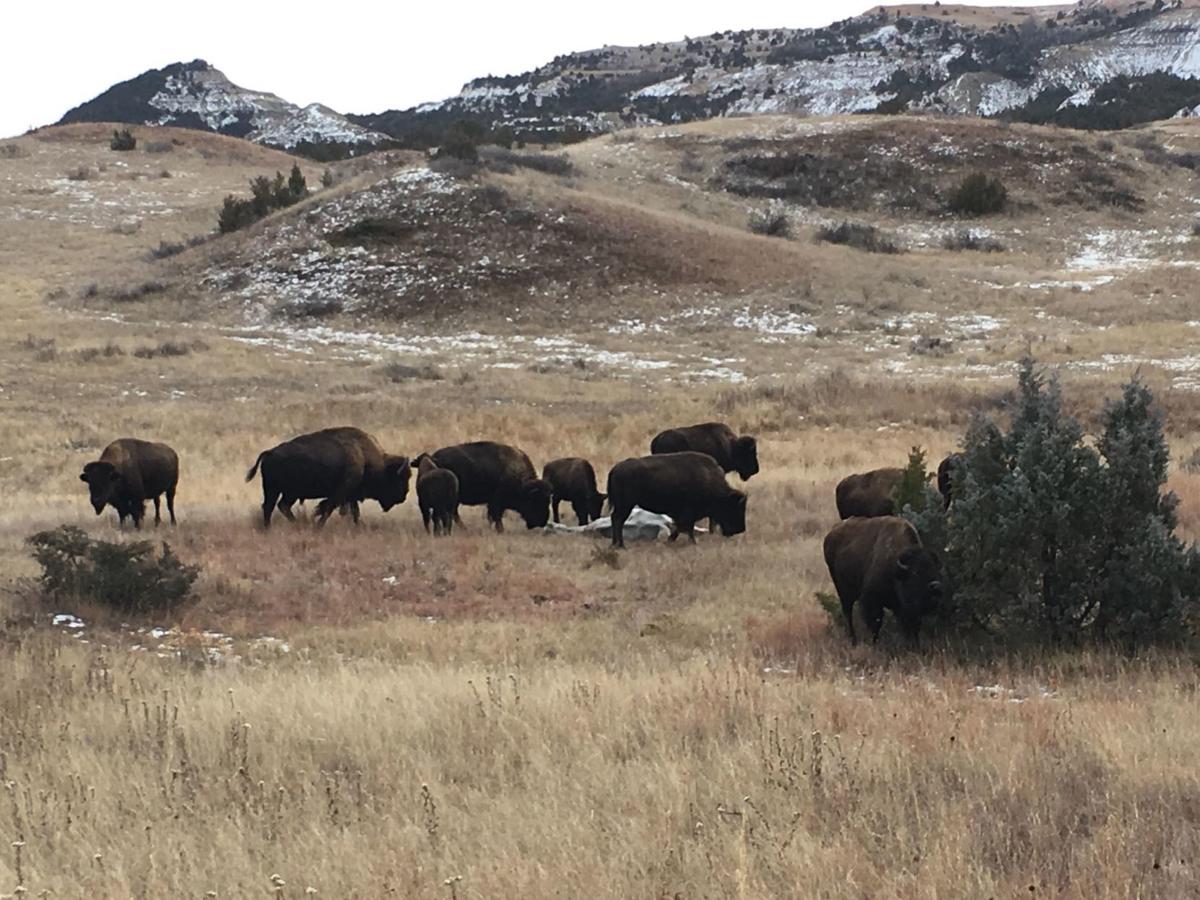 Buffalo surround Gray Ghost, a dead stallion at Theodore Roosevelt National Park, and lick his legs in what an observer believes could have been a display of mourning. 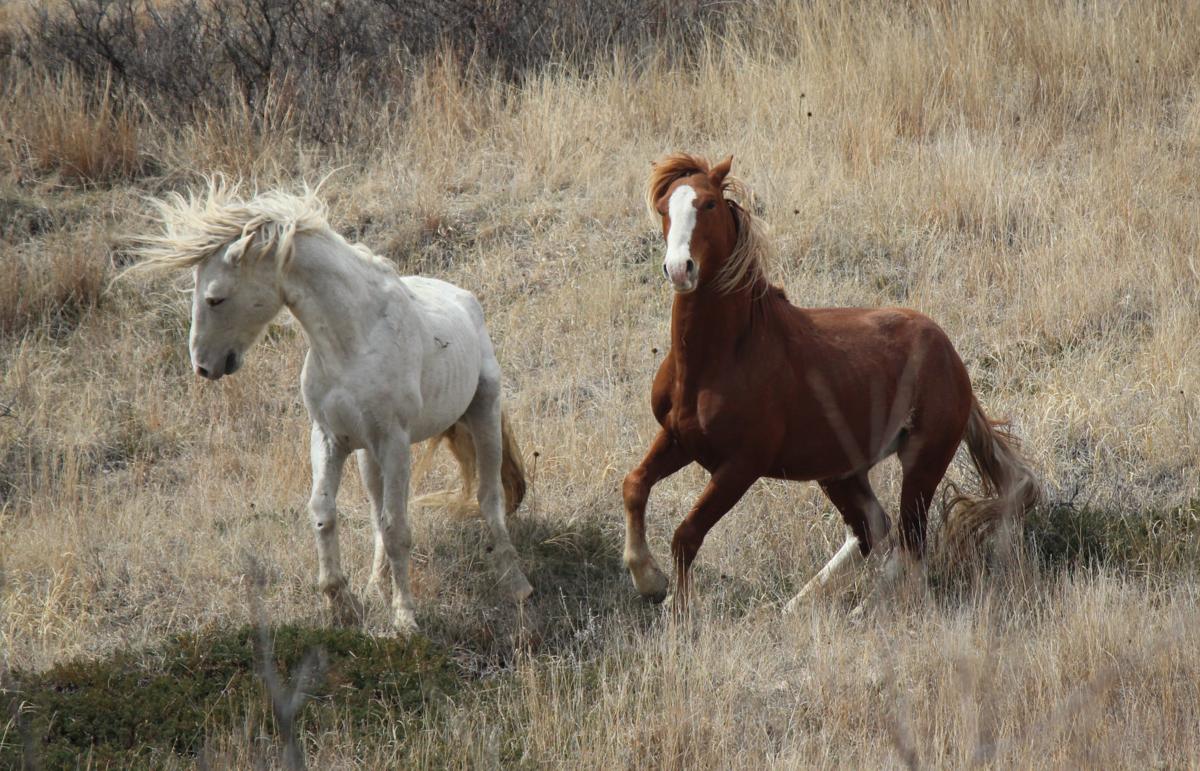 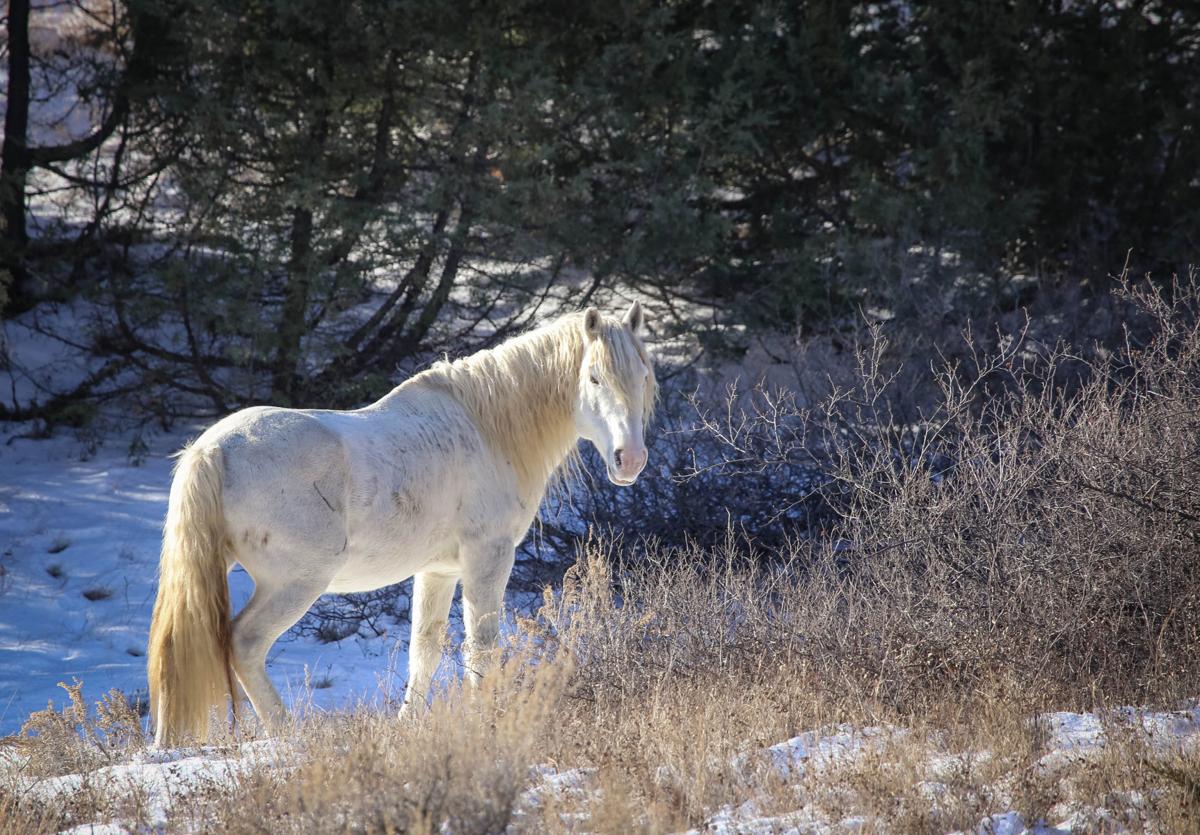 Gray Ghost was admired by followers of the wild horses at Theodore Roosevelt National Park for his flowing tail and mane. 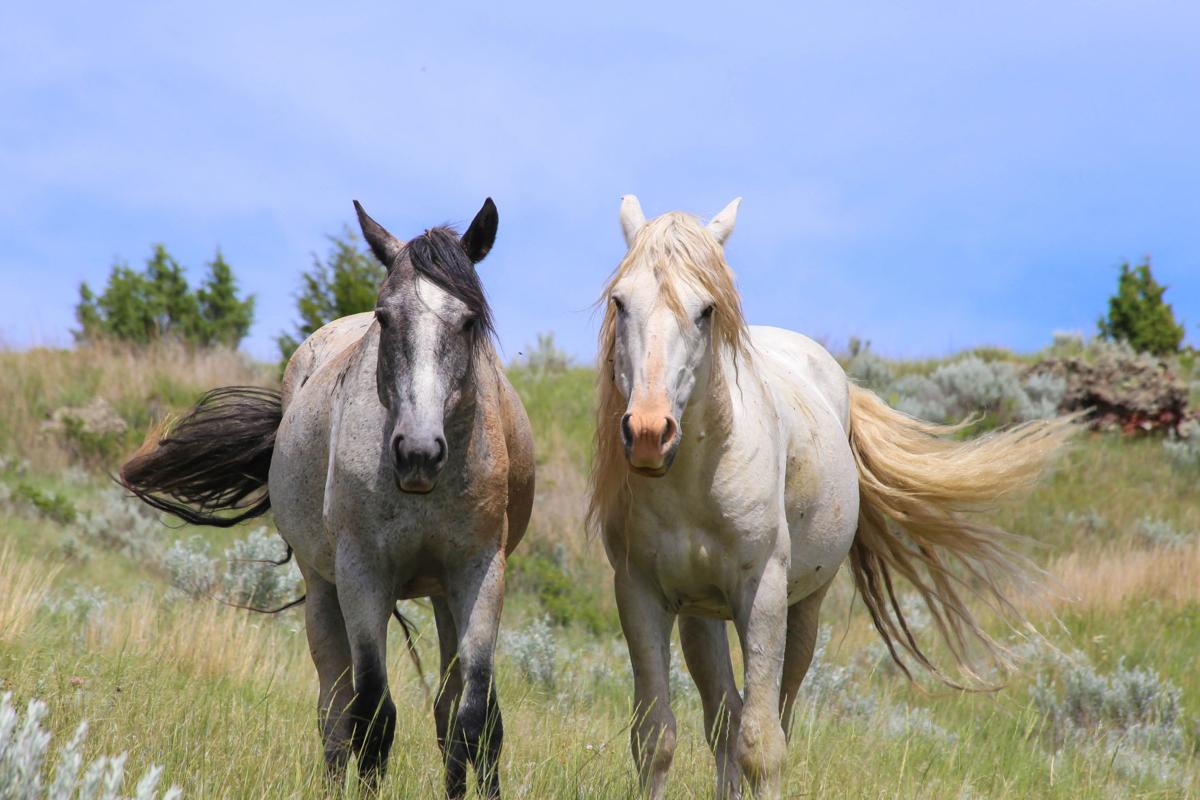 FARGO, N.D. — Tiffany Craigo hiked to a remote valley in the craggy badlands of Theodore Roosevelt National Park to say her goodbyes to a stallion named Gray Ghost.

Gray Ghost was admired by those who follow the wild horses at the park for his flowing tail and mane as well as the pale gray coat that inspired his name.

“He was a fan favorite,” Craigo said. “I thought he was beautiful and I liked him and I was happy when I saw him.”

But Gray Ghost had been looking sickly for the past year as he slowly lost weight.

“He was in rough shape,” Craigo said. His last band, which included three mares and a colt, had been stolen by a rival stallion who took advantage of Gray Ghost’s physical decline. “It was evident that he was struggling.”

So it was no great surprise when a friend told Craigo that she had discovered Gray Ghost’s body earlier this week. The next day, Craigo hiked to the spot to see Gray Ghost one last time.

Craigo, who lives in nearby Beach, N.D., has gone to the park regularly to observe and photograph the horses in the park’s south unit for more than three years.

Gray Ghost died in a location in the park where he had spent most of his 16 years: a small valley surrounded by hills and trees.

“It was almost like he went home,” Craigo said. “It’s beautiful where he is. Beautiful.”

Soon after her arrival, Craigo heard a noise on the hillside behind her. She turned around and saw a line of buffalo on top of the hill, staring down at Gray Ghost’s body. A female buffalo walked toward the still horse and stared at Craigo, who walked away from the body.

The female and two others then approached Gray Ghost’s body and did something Craigo didn’t expect.

“They began to lick his legs,” she said. A few minutes later, other buffalo took their turn, one after the other. Then the bull of the group of almost 30 buffalo formed a circle around Gray Ghost, giving Craigo the impression they were protecting him.

“I don’t know enough about bison to know if this behavior is normal but to me, it appeared as if they were paying their respects,” she wrote in a Facebook post on her page, Dakota Grown Photos. “It was amazing to see how each of them, one by one, gently licked him and then moved on.”

Others have described similar scenes of buffalo appearing to mourn members of their herds that died. In one case, a photograph of buffalo surrounding a dead buffalo at Wind Cave National Park was similar to the gathering Craigo photographed and described.

In another case, outside Yellowstone National Park, an observer with the Buffalo Field Campaign, a group opposed to the slaughter of park bison that wander outside the park, described buffalo that appeared distressed when herd members were shot and killed.

“Do bison grieve? Decide for yourself,” Kathleen Stachowski wrote in New West in 2005. “The remaining three slowly gathered around their fallen brother, the carriage of their tails registering distress. One, in particular, seemed especially anguished; he pawed the motionless shoulder as if to rouse him. Getting no response, he nudged the body with his head, then with the shank of his horn. Again and again he nudged and butted and pushed; finally, in an act of utter pathos, he lay down in resignation next to the body.”

Eileen Andes, chief of interpretation and public affairs at Theodore Roosevelt National Park, said she hadn’t heard of what appears to be mourning by buffalo, at the park or elsewhere.

“Bison have a really good sense of smell,” she said, adding they might have been sniffing in curiosity. “We really hate to ascribe human emotions to wildlife.”

Park officials number the horses, of which there are about 140, but do not name them, Andes said.

“We’ve never had a report like this,” she added. “We can’t get into their heads to see what they’re thinking.”

Others have noted that animals including elephants and whales give clear signs of grieving, but documented instances of interspecies grieving appear rare.

Craigo, who remained near Gray Ghost until after the buffalo left, said witnessing the buffalo’s reaction “made it a bit easier” to cope with the stallion’s death. Had she witnessed a bison mourning ritual?

“It made sense to me,” she said. “I don’t know if that’s what was going on. I’d like to think that’s what was happening. It’s something I’ve never experienced. I’ll never see anything like it again.”

Feral horses living in Theodore Roosevelt National Park in the Badlands of North Dakota likely had multiple origins, but have since become inbred.

Photo: Wild horses graze among the wildflowers in Pryor Mountains

Wild horses graze among wildflowers in the Pryor Mountains near the Dry Head Overlook on Wednesday, June 27, 2018.

Some tourists get too close to Yellowstone's bison, despite hearing warnings, study shows

From informational pamphlets handed out to tourists at the gates of Yellowstone National Park to roadside informational signs and displays in its visitor center, the park’s staff tried to teach visitors not to get too close to wildlife.

Yellowstone plans to ship 600-900 bison to slaughter this winter

Yellowstone National Park officials will capture 600 to 900 bison this winter to ship to slaughter in a continuing attempt to reduce the animals’ population as called for in an agreement with the state of Montana.

Grand Teton Park bison to be moved for goring horses

JACKSON, Wyo. — A herd of bison in northwest Wyoming will be moved to new rangeland because they have gored multiple horses on private land wi…

Some of the young horses in the national park in North Dakota will soon be removed, taken to keep the herd’s size in check to prevent overgrazing.

Gray Ghost, a stallion at Theodore Roosevelt National Park, in 2016, shortly after he took over a horse band from another stallion.

Buffalo surround Gray Ghost, a dead stallion at Theodore Roosevelt National Park, and lick his legs in what an observer believes could have been a display of mourning.

Gray Ghost was admired by followers of the wild horses at Theodore Roosevelt National Park for his flowing tail and mane.