Extreme drought and grasshoppers have taken a toll on Montana grains with harvest down by as much as half from a year ago.

The state, which normally ranks third in the nation for wheat production, has suffered steep declines in yield as nearly 99% of Montana is in severe to exceptional drought in the final weeks of harvest.

“Yield-wise, it will be our worse year since 1988,” said Cassidy Marn, Montana Wheat and Barley Committee executive vice president, referencing a year that’s been repeatedly uttered by Montana producers.

History remembers the 1988 drought as the year fire burned through 793,880 acres of Yellowstone National Park, but it was also a brutal year for Montana’s dryland farmers.

In years when good weather and strong prices merge, Montana wheat is a $1.3 billion enterprise. In the hard years, sales can be a little more than half that amount.

Earlier this month, the U.S. Department of Agriculture estimated that the quality of Montana’s spring wheat crop, typically the state’s reliable bread winner, was 67% poor to very poor and just 16% good. None of the crop was graded excellent. Similarly, half of the state’s winter wheat crop was rated from poor to very poor in quality at the beginning of the month, the last time farmers were surveyed by USDA.

In many of Montana’s best wheat growing areas, grasshoppers beat farmers to the harvest.

“For the most part, we’re looking at less than five bushels to an acre,” said Shelley Mills, of Valley County Extension. “And when you think about our lentils, they couldn’t get the lentils because the crop was so short. Every crop was short. Wheat was like eight inches tall and headed-out.”

It is hard to harvest crops so stunted that farm equipment can’t make the cut without being damaged by rocks. Valley County anchors a region that normally produces 45% of Montana’s spring wheat and is the epicenter for pulse crops like chickpeas and lentils. There are a few farmers in this northeast corner of the state that, because of its abundance refer to the area as the "platinum rectangle", a little jab at the productive northcentral part of the state known as the Golden Triangle. No one’s crowing this year.

There were quirky little areas like Lustre in the more northern part of Valley County, where a few timely rains produced just enough rain for maybe 10 farmers to have a decent spring wheat crop, Mills said. But the odds of receiving that kind of rain were Powerball-grade in a year when farmers with wheat to sell were receiving a cash price of more than $8 to $9 per bushel for hard red spring wheat, some of the best prices in recent years, and more than $7 a bushel for hard red winter wheat.

Behind every good price year for a globally traded commodity there is a devastating weather event creating market scarcity. This year, it’s Montana’s turn in the barrel. The state is a crimson stamp on the U.S. Drought monitor map with few exceptions. 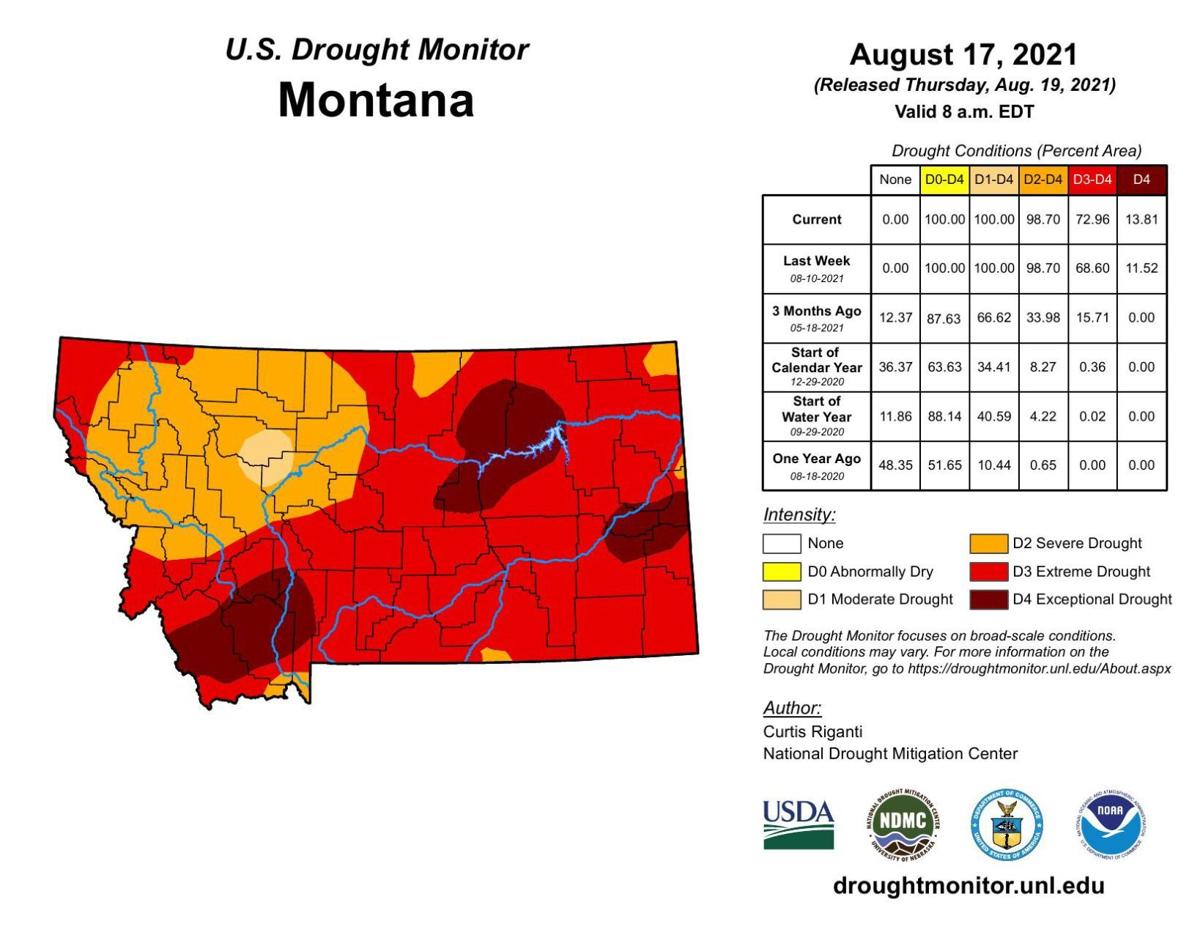 The National Oceanic and Atmospheric Administration's climate prediction center estimates drought in the West will persist into fall. The year's high temperatures are part of a warming trend dating back to the late 1980s, credited to climate change by scientists.

Things were tough in the Golden Triangle region as well. On Tuesday, dryland farmer Boyd Heilig was filling his water tank from a different area after the farm-and-firefighting water depot in Moore ran dry. In a normal year, the million-bushel grain elevator in Moore is full and there is a mountain of wheat on the ground beside it.

This year, Heilig’s harvest is way down, though he knows farmers in other parts of the state have it worse. Heilig is secretary of the Montana Grain Growers Association.

Farmers that did have a harvest experienced the kind of high-protein levels grain buyers normally pay a premium for. Heat stress drives up protein levels, which have been a hallmark of Montana wheat. Grain buyers normally pay more for Montana high-protein wheat, then blend it as a supplement with low-protein soft white wheat from the Pacific Northwest. But this year, every Western farm seems to have protein. Premiums haven’t been strong.

Marn, a first point of contact for foreign buyers looking for the right kind of wheat to feed mills in places like Japan and South Korea, said low protein Montana wheat, the kind with protein levels at about 10%, might be in better demand.

There are odd paths to market for many reasons. For example, Canada has recently turned to Montana for grain to feed livestock.

“Even this lower quality wheat coming off the field is worth a lot of money on the feed side. So, producers have that kind of outlet for some of the low-quality stuff,” she said.

It is not uncommon to see Canadian trucks shopping for barley pull onto the dirt farm roads of far northcentral Montana, said Mitch Konen, who farms near Fairfield. The Fairfield bench is one of the key malt barley-producing areas of the country, of those places where the roots of American and Mexican beer making thread into the ground. Konen is president of the Montana Grain Growers Association.

Barley for beer is in short supply this year, Konen said. Brewers who have come to expect malt to be available are not only scrambling for supply, but in some cases they’re competing unexpectedly with Canadian buyers looking for animal feed.

The protein that normally makes wheat more valuable is a deal breaker for malt barley. High protein makes for cloudy beer, and nobody wants that. Heat stress in barley drives up protein just like it does in wheat. Normally, heavy irrigation can keep barley protein levels low, but there are limits when the temperature pushes 90 to 100 degrees for weeks on end.

Malt barley, though usually grown under contract, is fetching a cash price of $6.75 per hundredweight at Montana county elevators, according to USDA. Canadians with animals in drought-scorched pastureland with no grass to eat are coming close to matching that malt barley price.

“I see trucks from Canada pulling up. They’re offering $6.50,” Konen said. Thinking about what this means for cost of a cold brew, he adds, “The price of beer is going up.”

Drought conditions are widespread in Montana

As crops go, wheat has always been Montana’s bread and butter and farmers are indicating they planted more winter wheat acres last fall as the…

The annual mean springtime temperature in the Upper North Platte Valley has increased by 3.6 degrees Fahrenheit since 1920. That’s more than triple the global average increase of 1 degree Fahrenheit. That rate of warming has major implications for a watershed that millions of people depend on. 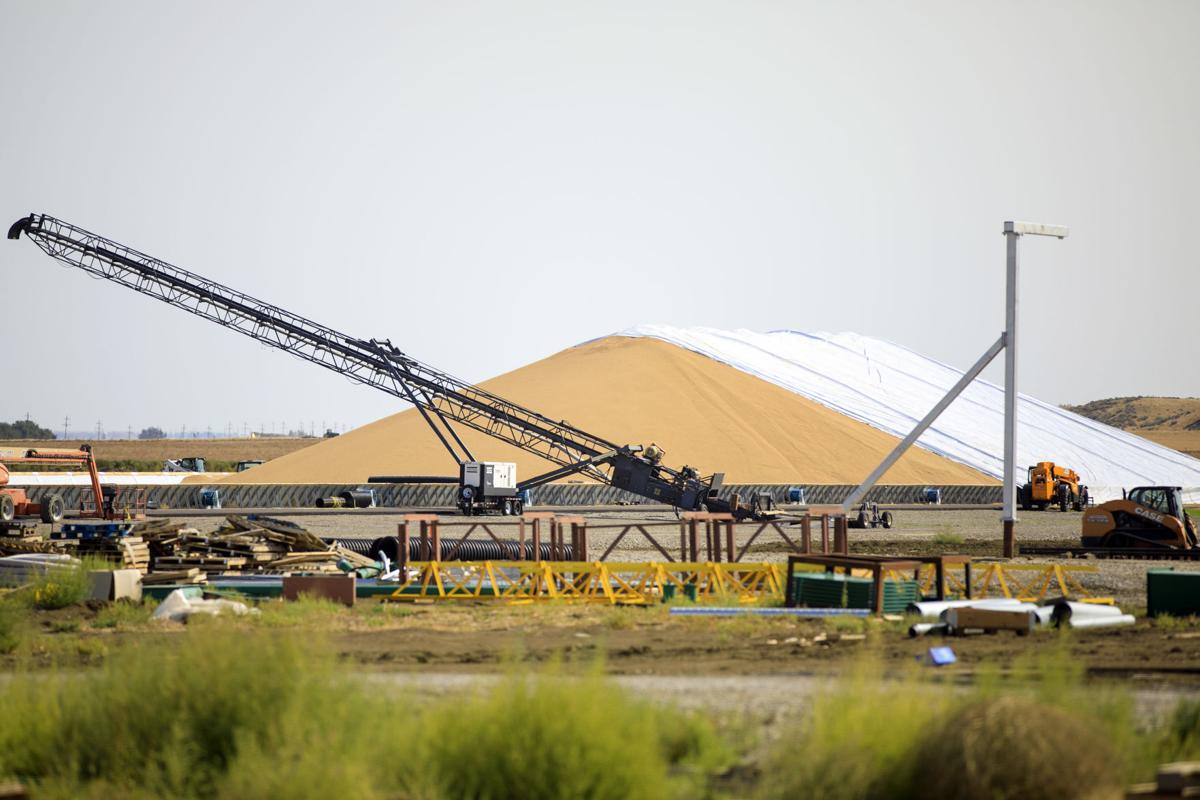 A large mound of grain is piled near silos at Gavilon Grain in Huntley. 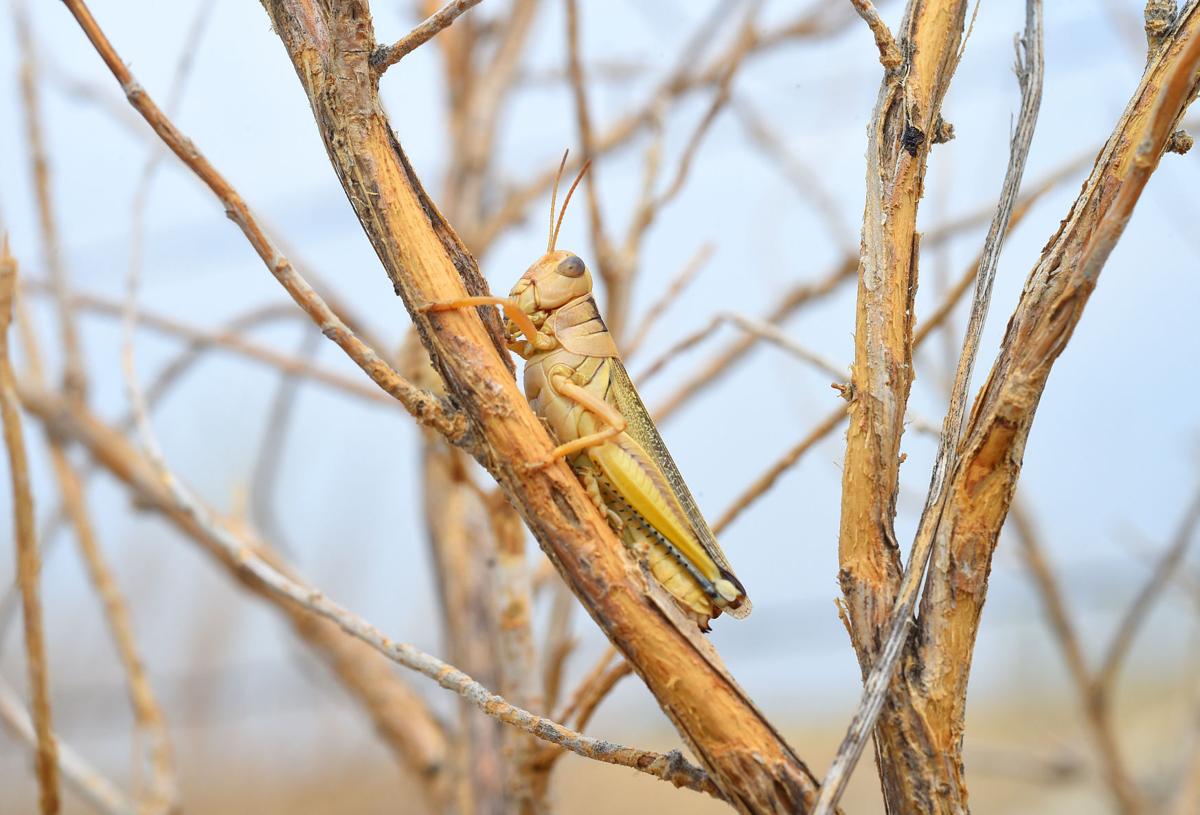 Even sagebrush is stripped bare by migrating grasshoppers near Malta. 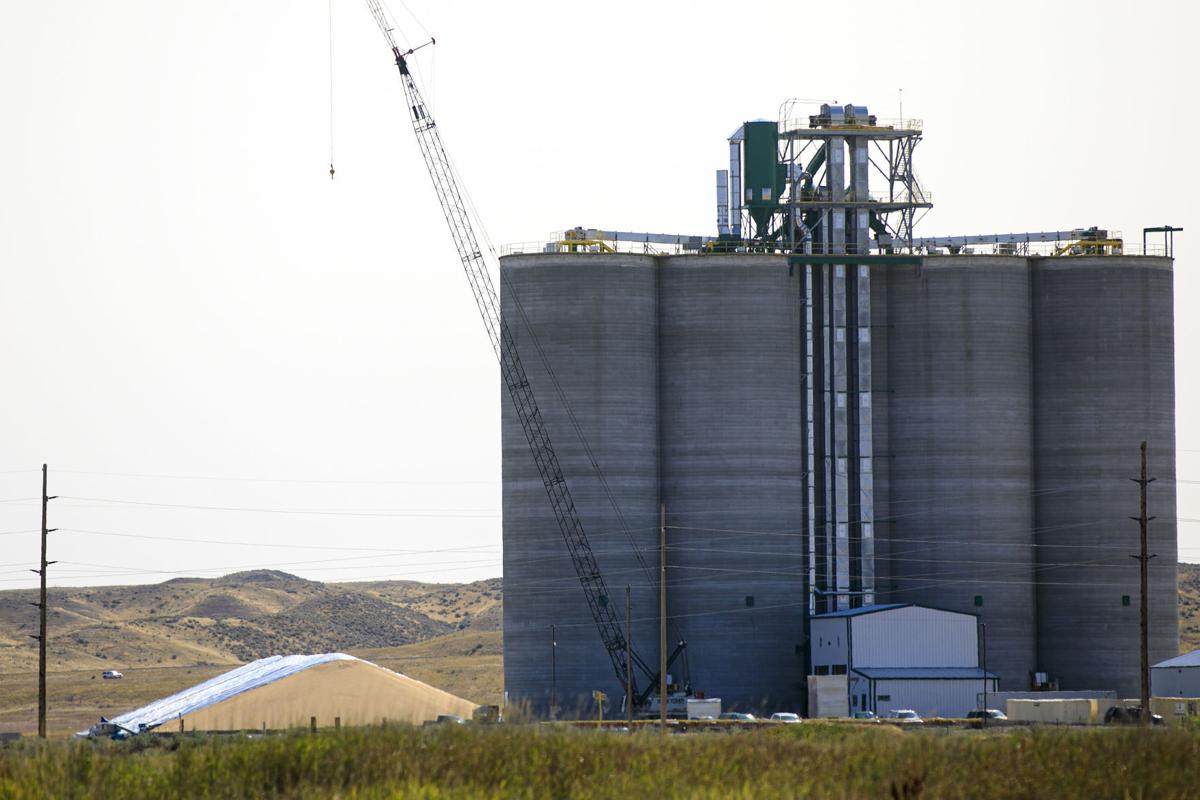 A large mound of grain is piled near silos at Gavilon Grain on Tuesday in Huntley. 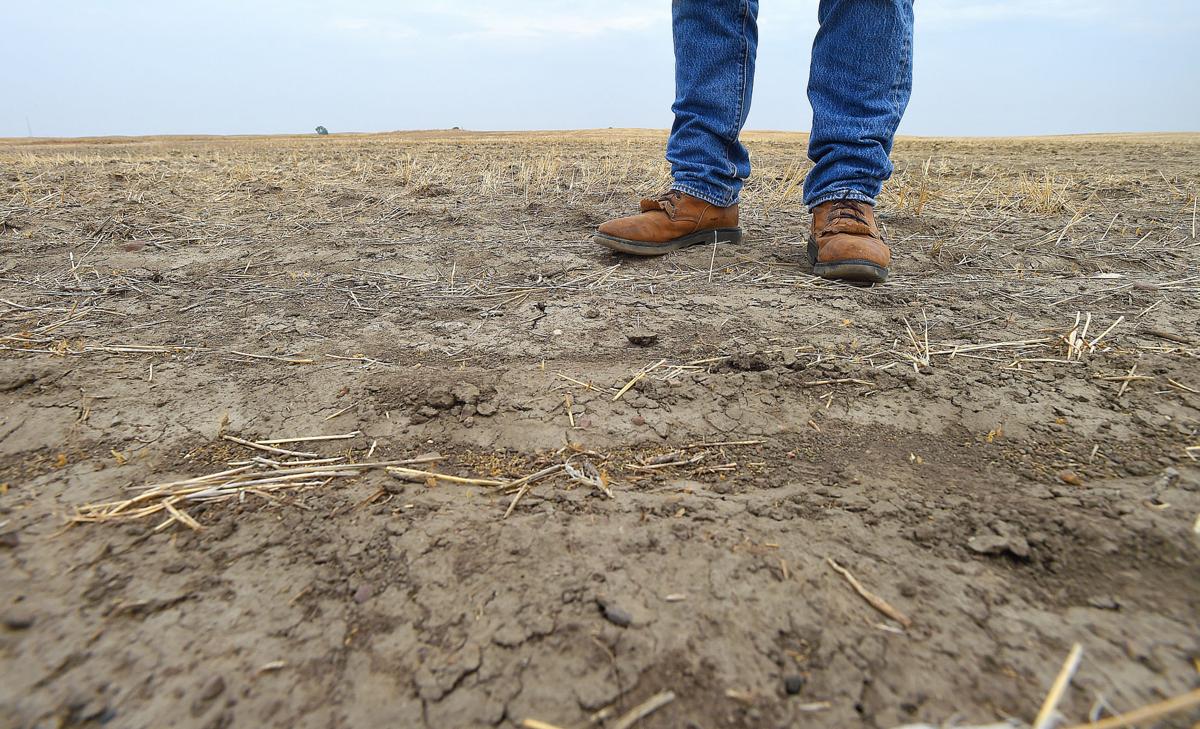