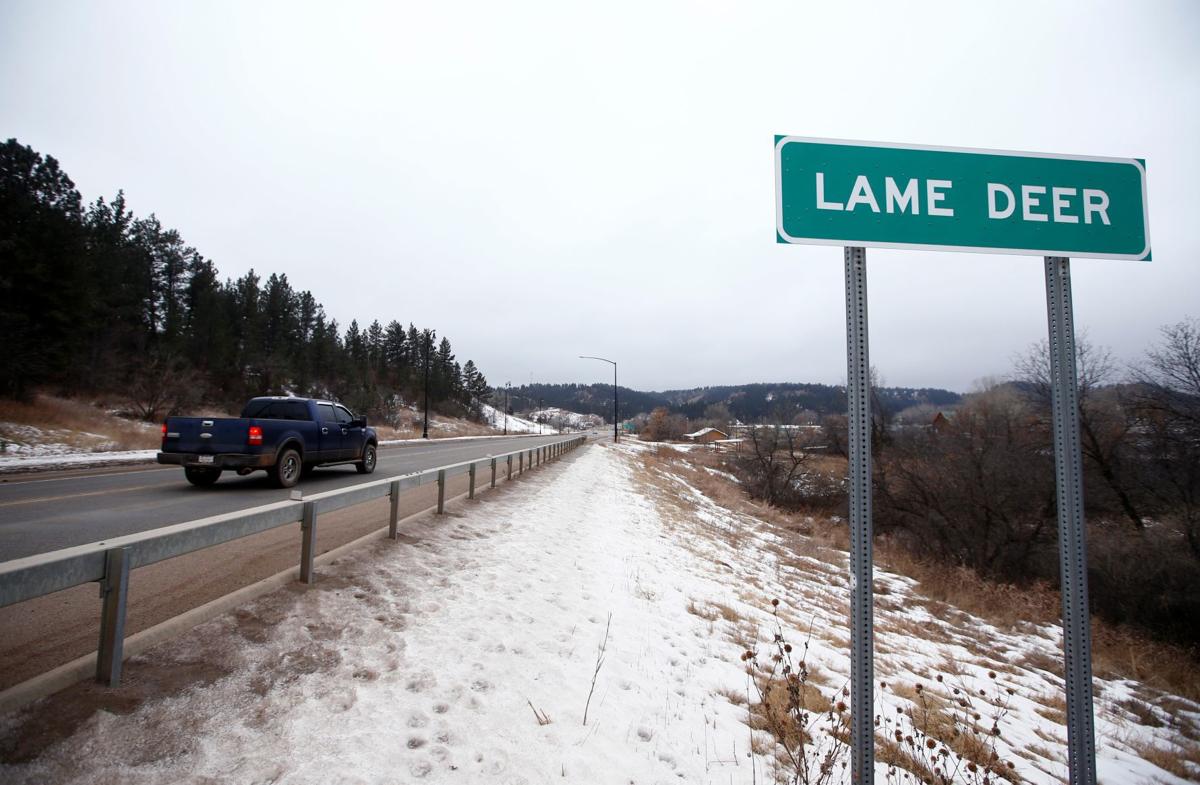 Motorists drive along Highway 212 through Lame Deer in January. 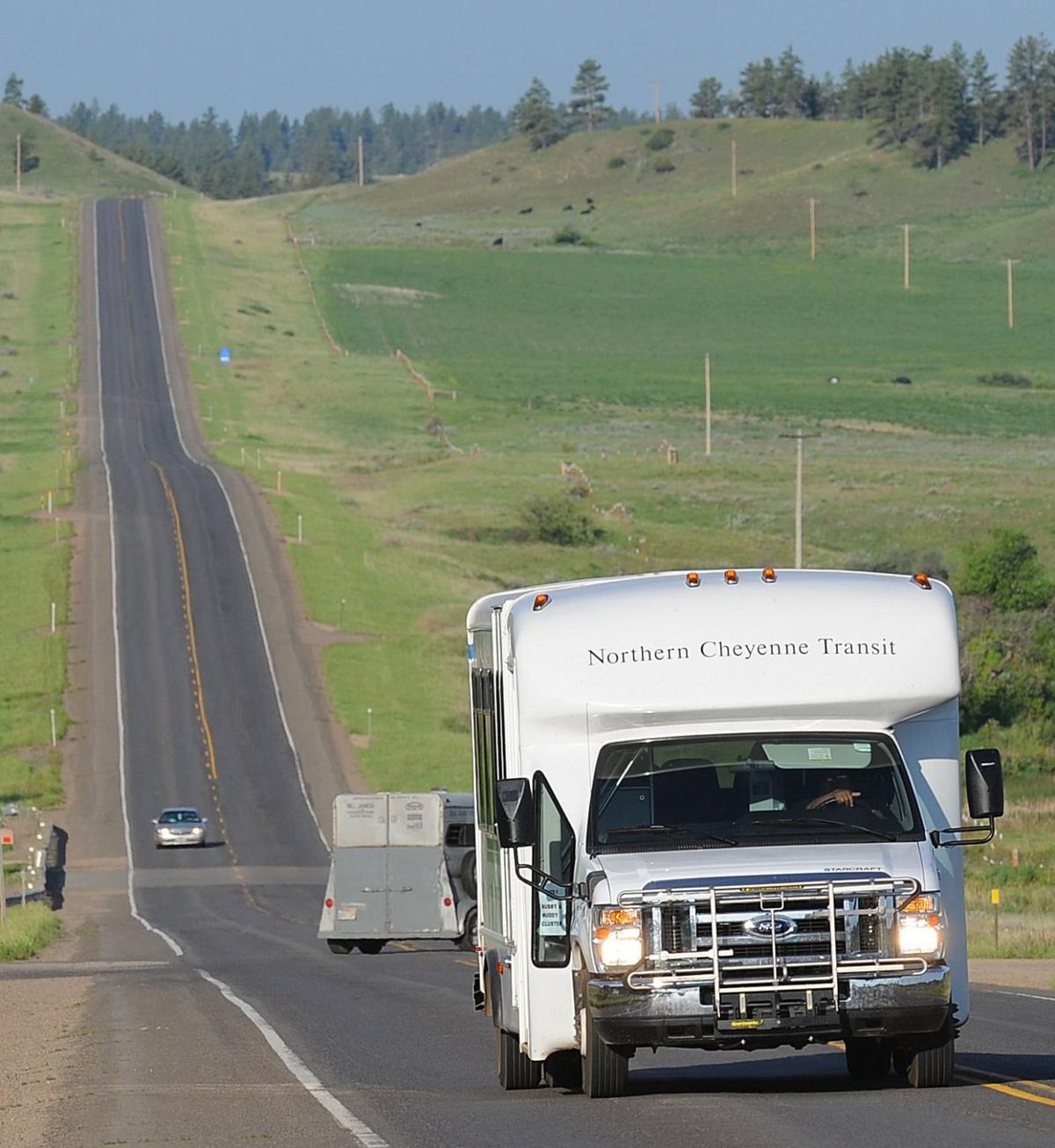 A Northern Cheyenne Transit bus rolls down Highway 212 as it picks up riders from across the reservation on Monday, June 1, 2009.

The US 212 corridor, which merges with Interstate 90 at the Bighorn Battlefield interchange and travels 167 miles east to the Montana-Wyoming state line, is the deadliest highway in the state.

To address that distinction, the Montana Department of Transportation on Oct. 1 reduced the speed limit in the corridor to 65 mph for all vehicles, and is looking at other solutions.

Lowering the day and night speed limits for all vehicles should help with the large proportion of trucks, nearly 40% of traffic in the corridor, and the annual average daily traffic greater than 3,000, according to an internal investigation released through MDOT earlier in 2019. Traffic data was collected and further analysis was conducted in 2018.

“For the National Highway System, yes, there was a high concentration of fatalities that we don’t observe on the remainder of the national system within the state,” said Doug Bailey, with the designer for the investigations unit of MDOT.

The corridor is comprised of two non-interstate national highways that pass through both the Crow and Northern Cheyenne Reservations and four counties: Big Horn, Rosebud, Powder River and Carter.

That stretch is the deadliest highway in Montana, according to fatal crash statistics, said MDOT Traffic and Safety Bureau chief Gabe Priebe.

In a three-year period on NHS 37, which spans from the Little Bighorn Battlefield interchange to the highway’s intersection with MT 59 near Broadus, 125 crashes were reported. About 12 of those crashes were fatal, resulting in 14 deaths. Crash history was taken between June 1, 2015, to May 31, 2018.

Many of the crashes were concentrated in the areas of Lame Deer and Busby along NHS 37. Increases in population densities leads to an increase in other forms of traffic like school buses and pedestrian traffic, Priebe said. One fatal crash occurred during the same time period on NHS 23 spanning from MT 59 near Broadus to the Wyoming state line.

A uniform speed limit of 65 mph for all vehicles is aimed at reducing the number of crashes. Previously, the speed limit was 70 mph during the day and 65 at night for cars, and 60 and 55 for trucks.

Because of the highway’s rolling landscape, Priebe said eliminating the different speed limits for trucks and cars will increase traffic safety. It will also help reduce reckless passing maneuvers on rural segments of the road where there are limited passing opportunities.

Speeding was the greatest reason for citations along the highway during the three-year period, according to the study.

Bailey said the terrain along the highway is unlike the flatter landscape normally found in much of Eastern Montana. Passing lanes, winding roads and steep vertical grades can be found along the roadway.

That corridor "doesn’t really fit the mindset of what Eastern Montana is,” Bailey said. “A large portion of it is quite rough terrain.”

According to the speed study, the corridor has been reconstructed or improved within the past 18 years except for an older 10-mile segment that was reconstructed in 1994 along the Powder River and Carter County line. The highway is designed to modern National Highway standards.

The MDOT Transportation Commission requests comments from each county affected by changes made by the department, but does not require approval by all to make speed limit changes.

Many county commissioners agree with the speed limit change, citing that in populated areas many cars are entering and exiting the highway.

According to MDOT public information officer Lori Ryan, there are a few other solutions the department is considering to improve the highway.

She said that MDOT has initiated other highway reconstruction projects that are already constructed or in progress, and that other speed limit studies have been done. There are a few possibilities for site-specific traffic control improvements along the highway and plans to install school bus signing at certain locations.

Montana Highway Patrol Capt. Keith Edgell said that since this stretch of highway is a restricted speed zone, there’s no 10 mph grace limit while passing slower vehicles. He said that points are assessed on a person’s driver’s license regardless of how fast they are going.

For a driver, accumulated points can result in suspended or revoked licenses. Fines are heftier in the zone as well.

Working as a volunteer first responder for 25 years in the county has also opened his eyes to the frequent crashes in the area.

Over 300 turn-off points line US 212 on the Northern Cheyenne Reservation in Rosebud County, with Joiner noting that these intersections are especially dangerous.

The reduced speed limit should help lower the number of crashes on the roadway, but only if there is more law enforcement, he said.

Joiner said the county is talking to the Northern Cheyenne about cross-deputization among the reservation, the county and the state. This means that along US 212, the Bureau of Indian Affairs Police, the Montana Highway Patrol and the Rosebud County Sheriff’s Office could ticket drivers who are tribal members or not.

“You can put whatever signs up on the highway, if they’re not enforced, nobody is going to follow them,” Joiner said.

However, Powder River County did not agree with the speed change.

Powder River County Commissioner Lee Randall said he travels the highway stretching from Broadus to the state line, and noticed many cars driving close to 70 mph regardless.

“People are patterned at 70 mph, and it seems like a safe speed for passenger cars and we didn’t see any necessity to go any slower,” Randall said.

Randall said there are no passing lanes on the section of road in the county and that potholes are a problem. Randall said that MDOT should focus on a special speed zone from Broadus to Interstate 94, believing there is a greater concern for speeding in that area.

Carter County commissioners were also opponents to the speed change. Commissioner Rod Tauck noted roadways that need to be addressed.

According to the county commissioner's comments to MDOT, lowering the speed limit through Alzada to 45 mph is high priority, with requests to look into Highway 323 and Highway 7. Attempts to repair potholes on Highway 323 haven’t been helpful, it states, and the southern portion of Highway 7 has seen more commercial traffic making it more dangerous.

“We’ve had a lot of highway crews patching up the pot holes most of the summer, but it turns out that a lot of their patches are breaking out a few weeks after they put them in,” Tauck said.

Priebe said that MDOT is working on addressing this area.

“MDOT maintenance crews have been repairing sections of Highway 323 for the past six weeks or so and will continue to as weather permits,” according to an email from Priebe as of Oct. 21. “We are also in the process of developing a longer-term project solution for this area, subject to available funding.”

MT 16 or NHS 20 from Glendive to Sidney and US 191, or NHS 50 through Gallatin Canyon are other roadways that have received a speed limit change in the past.

After barely three months of use, the newly constructed U.S. Highway 212/310 from Laurel to Rockvale has already seen two fatal crashes, and C…

Completing construction of the new U.S. Highway 212/310 project from Laurel to Rockvale will be a priority among projects discussed Wednesday …

Man calls himself in after high-speed chase through Billings

A fuel truck overturned on Highway 312 west of Worden closed the highway for more than two hours Wednesday night.

A head-on crash involving a sedan and a truck in Big Horn County seriously injured two women in their 70s or older Wednesday evening.

As Carbon County eyes building a jail in Joliet, residents Wednesday raised concerns about higher taxes, the proposed jail's proximity to a sc…

2 adults hurt, but no children, in school bus crash near Garryowen

Two adults were injured in a head-on collision between a school bus and a passenger car near Garryowen on Thursday morning.

Motorists drive along Highway 212 through Lame Deer in January.

A Northern Cheyenne Transit bus rolls down Highway 212 as it picks up riders from across the reservation on Monday, June 1, 2009.