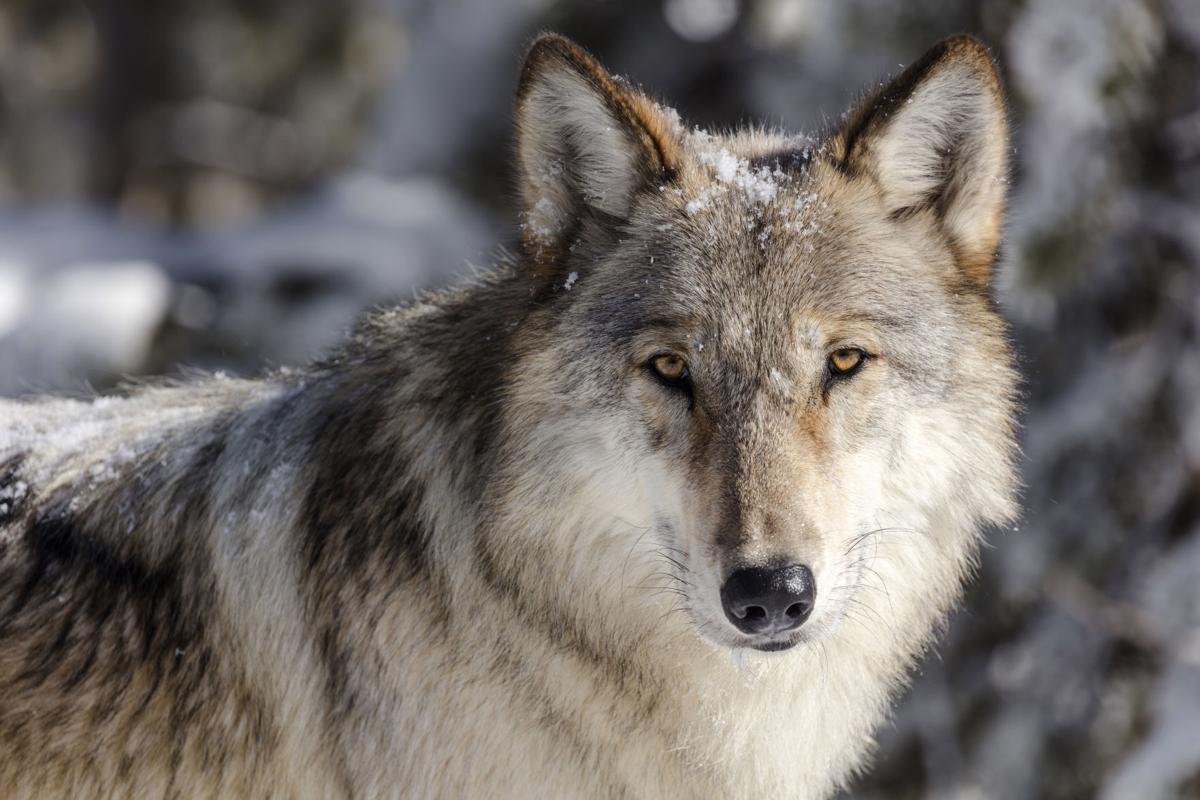 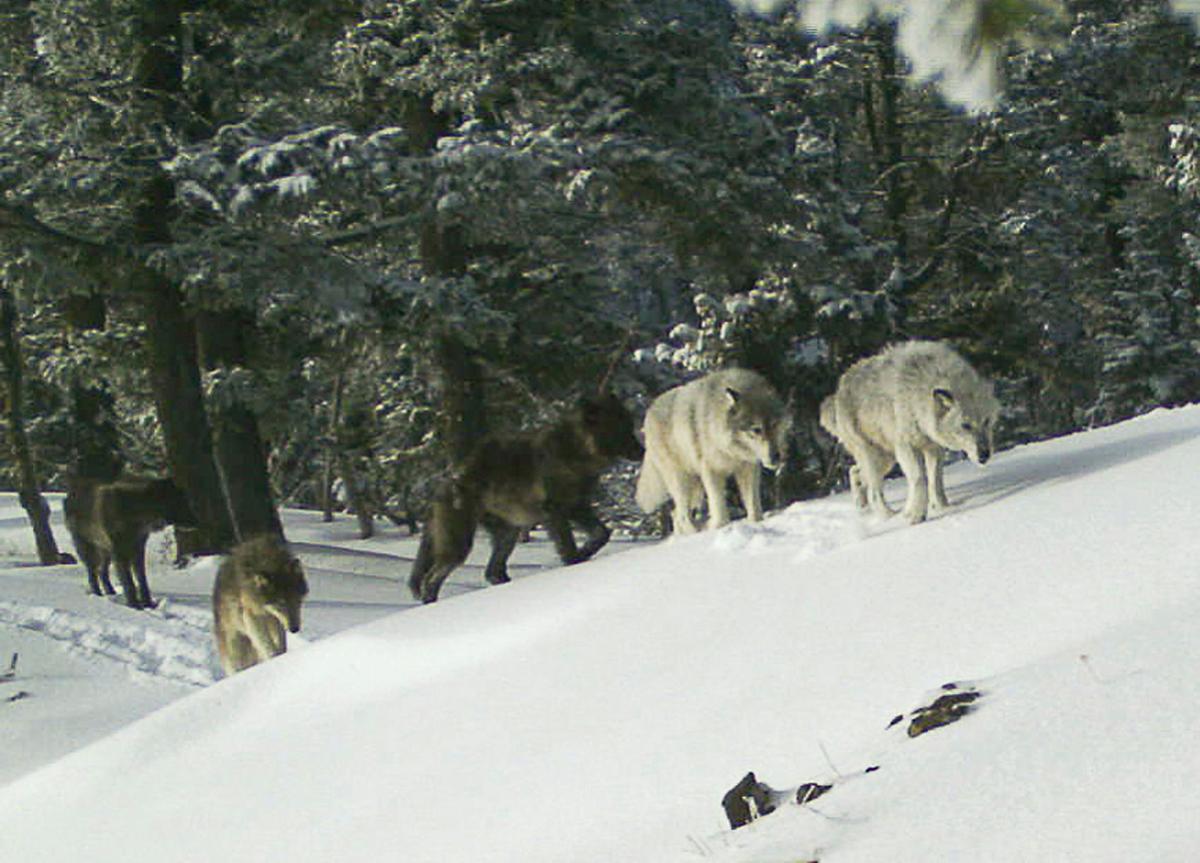 On Feb. 1, 2017, a wolf pack is captured by a remote camera in Hells Canyon National Recreation Area in northeast Oregon near the Idaho border.

Gray wolves in the West could go back under federal Endangered Species Act protection due to the risk of “potential increases in human-caused mortality,” the U.S. Fish and Wildlife Service announced on Wednesday.

The decision to start a 12-month review of the wolf’s status came on the same day Montana and Idaho opened hunting and trapping seasons on the predator.

In its notice, FWS cited petitioners’ claims that “recent regulatory changes in Idaho and Montana may pose a threat to wolves in these states by expanding the means and methods of harvest such that the species may become threatened or endangered.”

FWS also “finds that new regulatory mechanisms in Idaho and Montana may be inadequate to address this threat” to wolves’ survival.

This spring, Montana Gov. Greg Gianforte signed four bills liberalizing wolf killing, including measures removing limits of how many wolves a licensed hunter can kill; use of snares, spotlights and bait for hunting; and permission for private groups to reimburse wolf hunters for expenses.

In Idaho, Gov. Brad Little signed bills allowing wolf killing from motorized parachutes, ATVs or snowmobiles year-round without limits in much of the state, with the stated intention of reducing the population there by more than 90%.

“It’s not a matter of if but when a whole lot of wolves will be killed,” said Sarah McMillan of WildEarth Guardians, one of the groups that successfully petitioned FWS for the status review. “We’re looking at losing 1,800 wolves in Montana and Idaho alone. We’re going back to the scary folklore days when wolves would kill our babies. This resulting vendetta against wolves is not connected to anything real.”

McMillan was frustrated that FWS didn’t act faster to reconsider wolves’ status given the impending changes in hunting and trapping rules, she said. Rather than reinstating protections on an emergency basis, the service opted to take a year to study the situation and gather public comment.

WildEarth Guardians, Center for Biological Diversity, Humane Society of the United States, Humane Society Legislative Fund and Sierra Club filed two separate petitions to FWS asking for the status review in the Rocky Mountain states and also throughout the West. McMillan said the larger scope stemmed from the fact that new wolf packs appearing in Washington, Oregon, California and Colorado depended on dispersing wolves from Montana, Idaho and Wyoming.

On Tuesday, a coalition of American Indian Tribes and organizations sent a letter to Interior Secretary Deb Haaland invoking tribal sovereign treaty rights to consult with the federal government over wolf protections.

Montana has a wolf population of about 1,150, according to the latest state Fish, Wildlife & Parks annual wolf report. Wolf hunting license sales have generated $4.4 million for wolf management and monitoring since 2009. Montana hunters and trappers killed 305 wolves in 2020.

State or federal wardens killed 52 wolves in response to depredations in 2020, down from the average of 67 a year since wolves were delisted in 2011.

Sen. Bob Brown, R-Thompson Falls, authored some of the new Montana wolf rules, including a provision allowing private organizations or individuals to reimburse wolf hunters or trappers for their expenses.

“I kind of figured they were going to do some of that,” Brown said of the FWS status review. “That’s why we wrote the legislation the way we did — to be sure we didn’t fall below the minimum population requirements that might trigger relisting. I think they’ll find we won’t achieve that. I don’t believe we’ll ever get them (wolves) to the point they need to be re-listed.”

Former President Donald Trump’s move during his final days in office to delist gray wolves throughout the United States prompted a letter signed by 115 biologists to the Department of Interior warning that states were over-reaching in their campaigns to limit wolf numbers.

“Some argue against reinstating federal protection on the grounds that doing so would unleash broad backlash in the form of eroding support for the ESA among American citizens,” the scientists wrote to Haaland and FWS Principal Deputy Director Martha Williams.

“However, scientific evidence indicates that Americans’ support for the ESA is strong, has remained strong over time, and is not reduced when the ESA is implemented. Overall, the best-available science indicates that the American public expects the service to lead us toward wolf recovery.”

Increased pressure and liberal harvest tactics aimed at wolves might also affect the ESA status of grizzly bears, which can get caught in the same snares and bait sites, experts warned. That could derail parallel efforts to delist grizzly bears in Montana, Idaho and Wyoming.

Sen. Steve Daines, R-Montana, said on Wednesday he was confident the wolf is biologically recovered and Montana is capable of maintaining it.

“Gray wolf populations are thriving thanks to the strong state-led management of the species, and Montana has safeguards in place to ensure that continues to be the case,” Daines said shortly after the FWS announcement was released. “Activist environmental groups are diverting limited resources from protecting species that are actually endangered in an exercise that we know will be futile.”

But Collin O’Mara, president of the National Wildlife Federation, said that recent state management changes put that capability in doubt.

"The recovery of the gray wolf in the Northern Rockies is a great wildlife success story,” O’Mara said. “Since their delisting in 2011 and 2017, these states have been largely successfully managing healthy wolf populations. Unfortunately, too often wolves are not managed according to the best available science, or to the same standards of excellence applied to other wildlife species — especially when state legislatures disregard the expertise of professional wildlife biologists.”

Gabby Petito, 22, set out on a summer road trip with her boyfriend in a camper van in early July. Petito’s family reported her missing to authorities on Saturday after not hearing from her for about two weeks.

Landowner worried tailings dam at East Boulder Mine could fail

Leon Royer seeks evacuation plans for a breach, a back-up dam and bonded compensation if lands are buried under waste from the platinum and palladium mine.

About 1,500 students at Great Falls High School will begin remote learning Tuesday and through the rest of the week because of an increase in COVID-19 cases among students and staff.

ATV rider struck and killed by train near Wolf Point

Montana remembers: Gazette readers share their memories of 9/11, and what we've learned

Editor’s note: There was something about the shock of those first few minutes of learning about the 9/11 terrorist attacks that burned the det…

At issue is a rate increase of $26.40 year for average homeowners, which NorthWestern had argued last spring was necessary to deal with projected energy prices that turned out to be higher than expected.

The Sand Creek Fire grew from 150 acres on Thursday to approximately 749 on Saturday morning and is currently 0% contained.

An Idaho man who served more than four years in federal custody for his part in an armed 2014 standoff against federal agents near states’ rights figure Cliven Bundy’s Nevada ranch is suing the U.S. government and prosecutors for damages.

On Feb. 1, 2017, a wolf pack is captured by a remote camera in Hells Canyon National Recreation Area in northeast Oregon near the Idaho border.