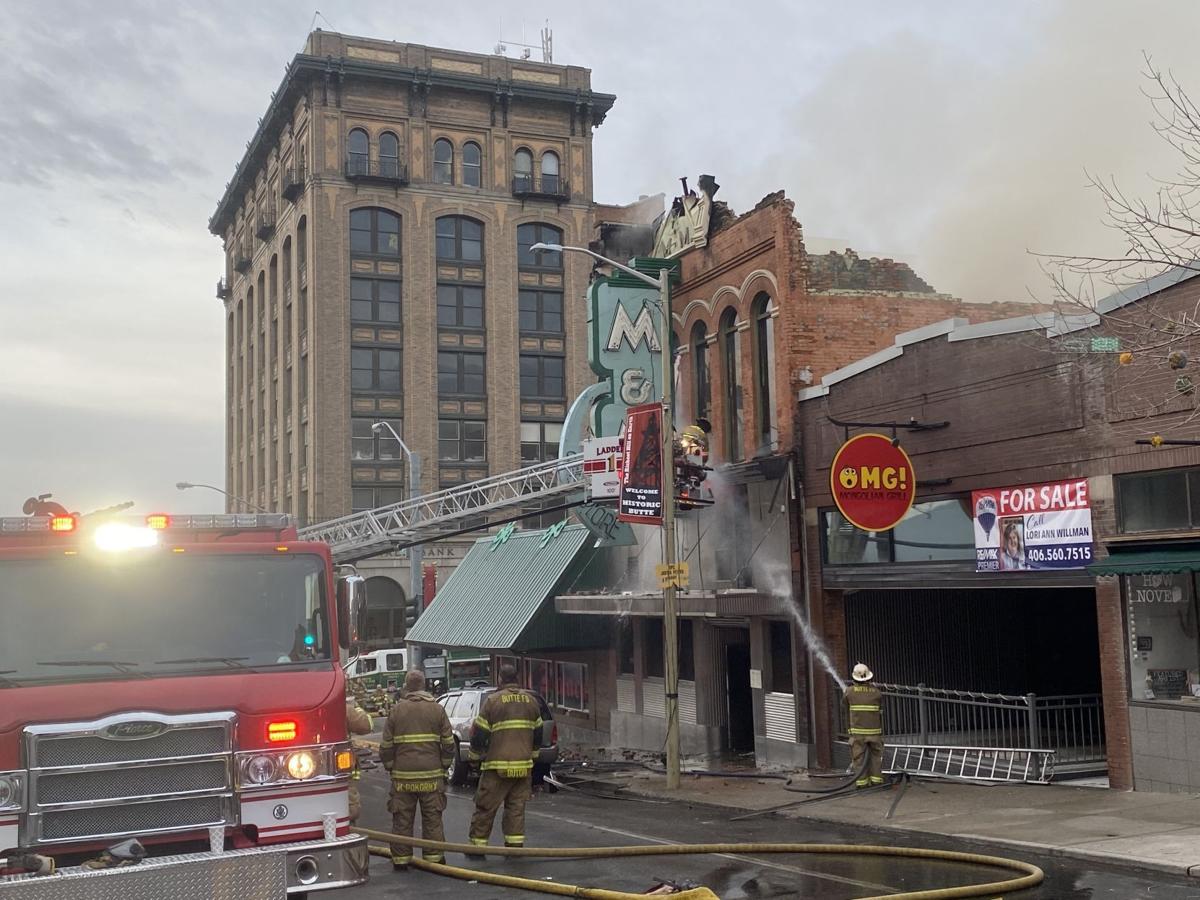 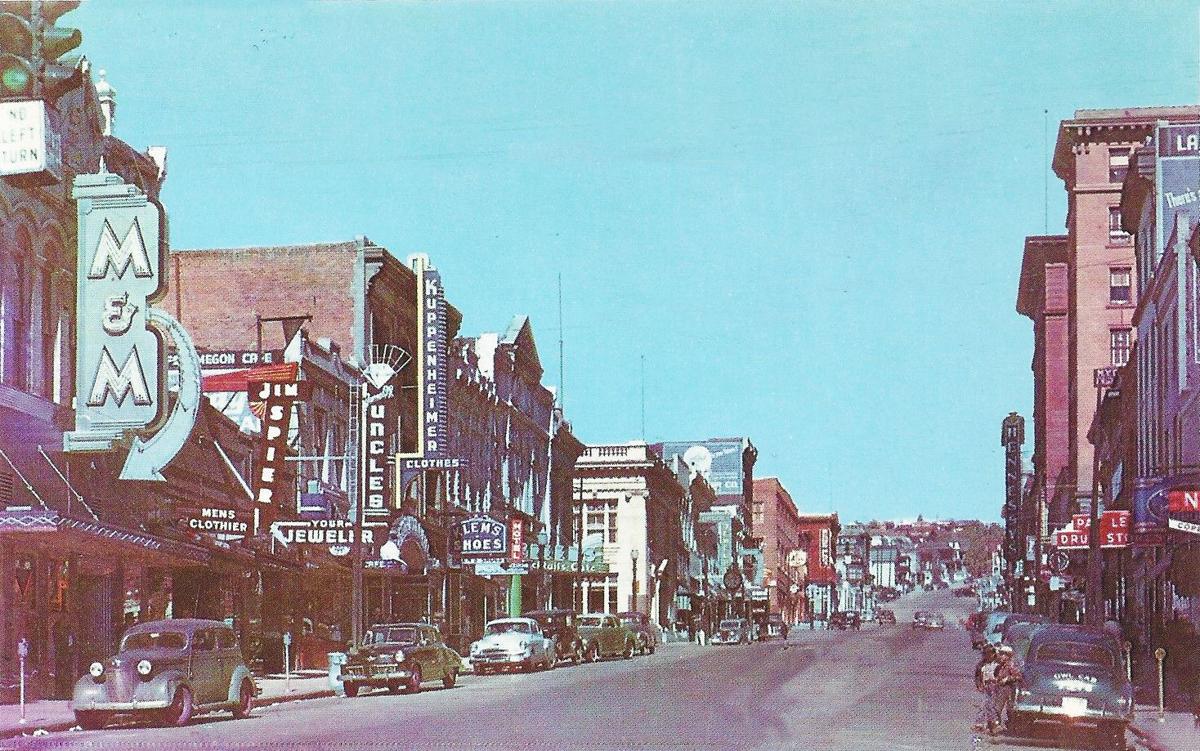 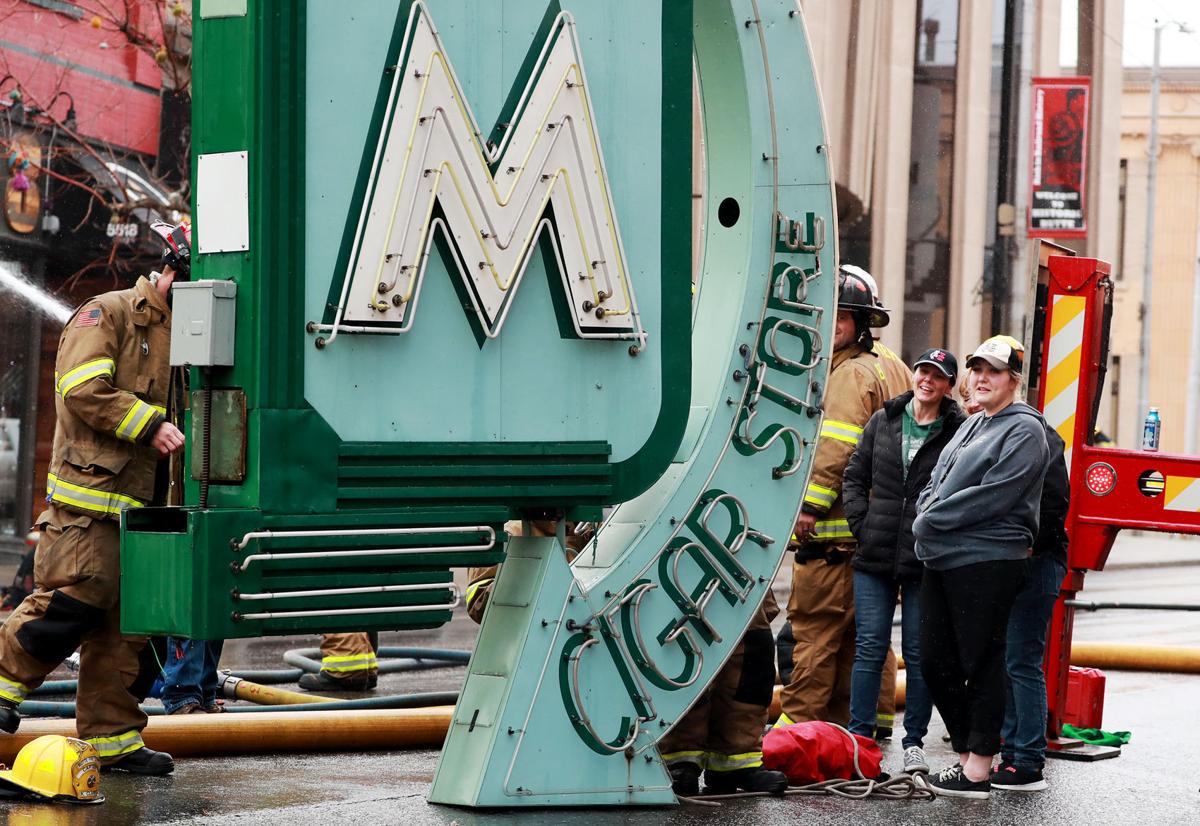 After watching firefighters battle a blaze all morning and into the afternoon at the M&M Cigar Store, Selina Pankovich, center, owner of the historic tavern smiles as she stands near the iconic sign that Butte firefighters saved from the burning building on Friday afternoon on Main Street in Uptown Butte. 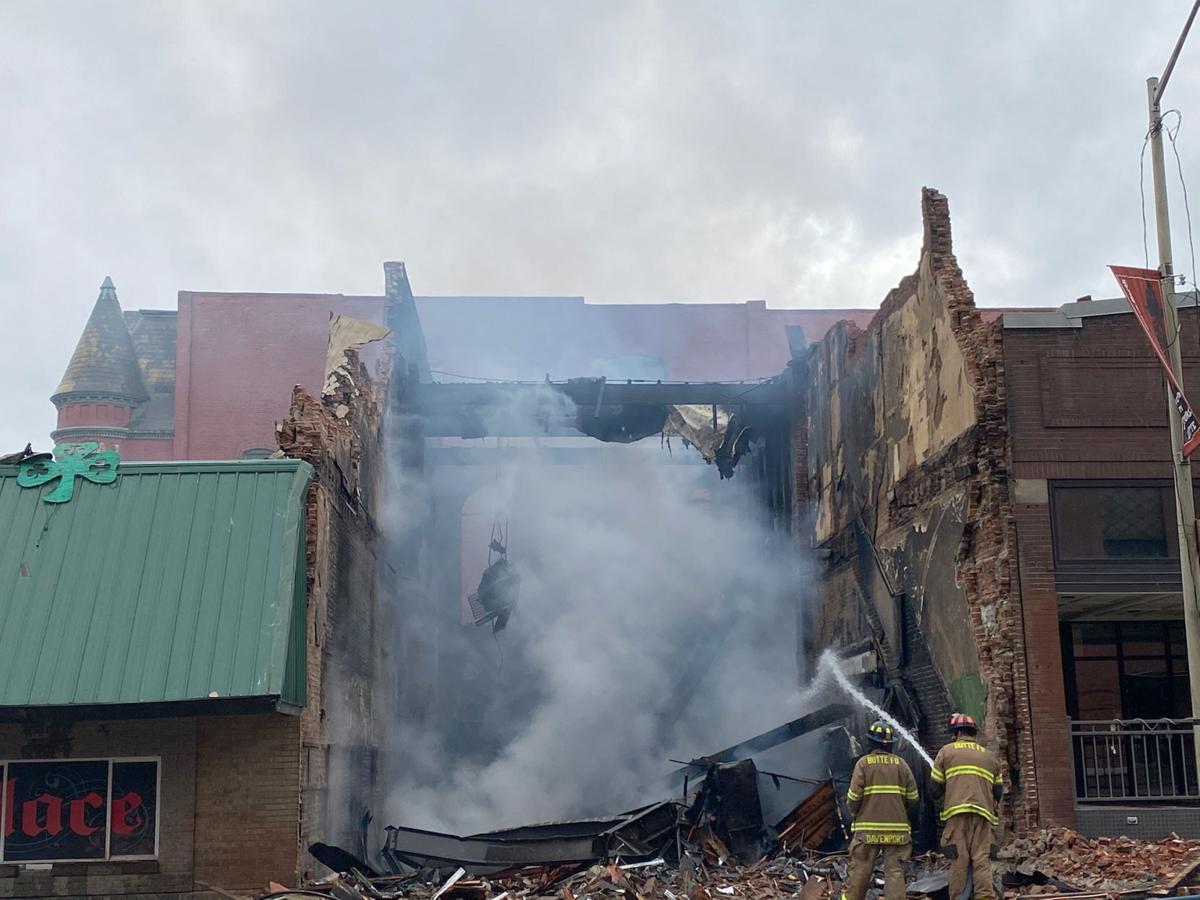 Everything within the side walls and the facade of Butte's M&M was demolished by 6:30 p.m. Friday. 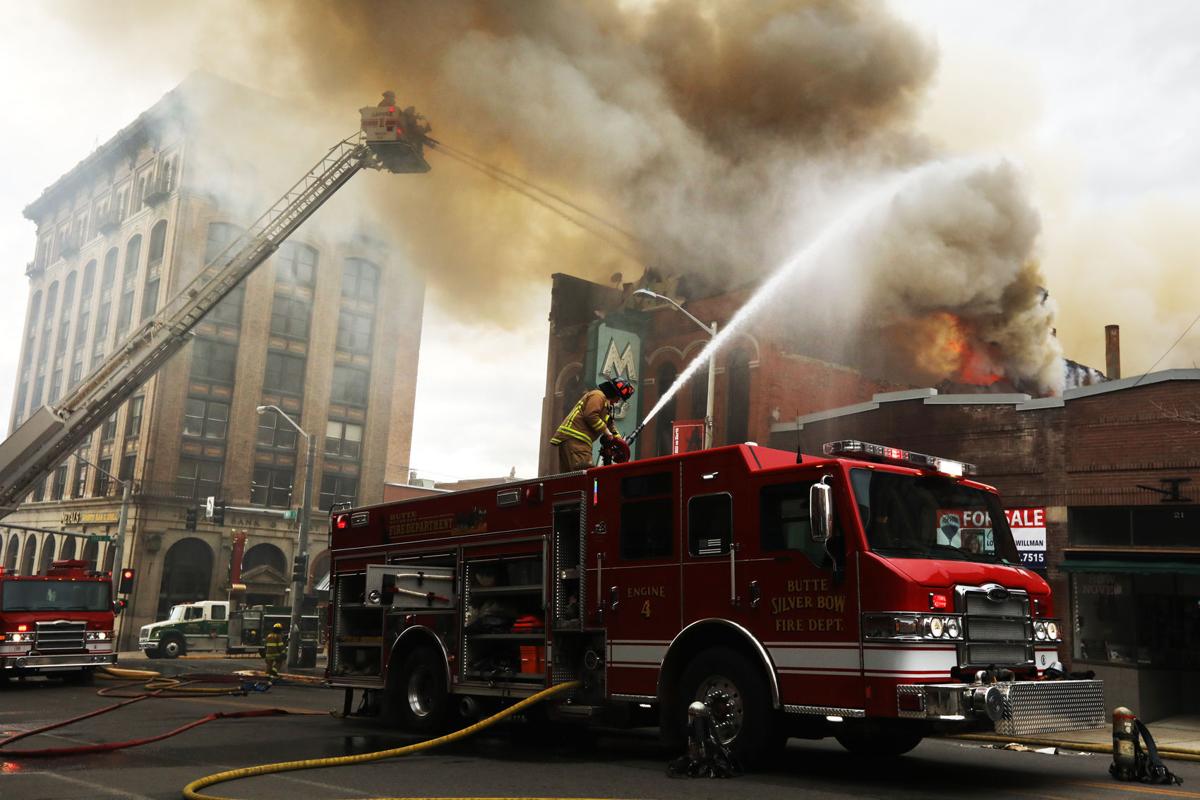 Butte Silver Bow Fire Department firefighters work form the air and the ground to knock down the flames shooting out of the historic M&M Cigar Store on Friday afternoon in Uptown Butte. 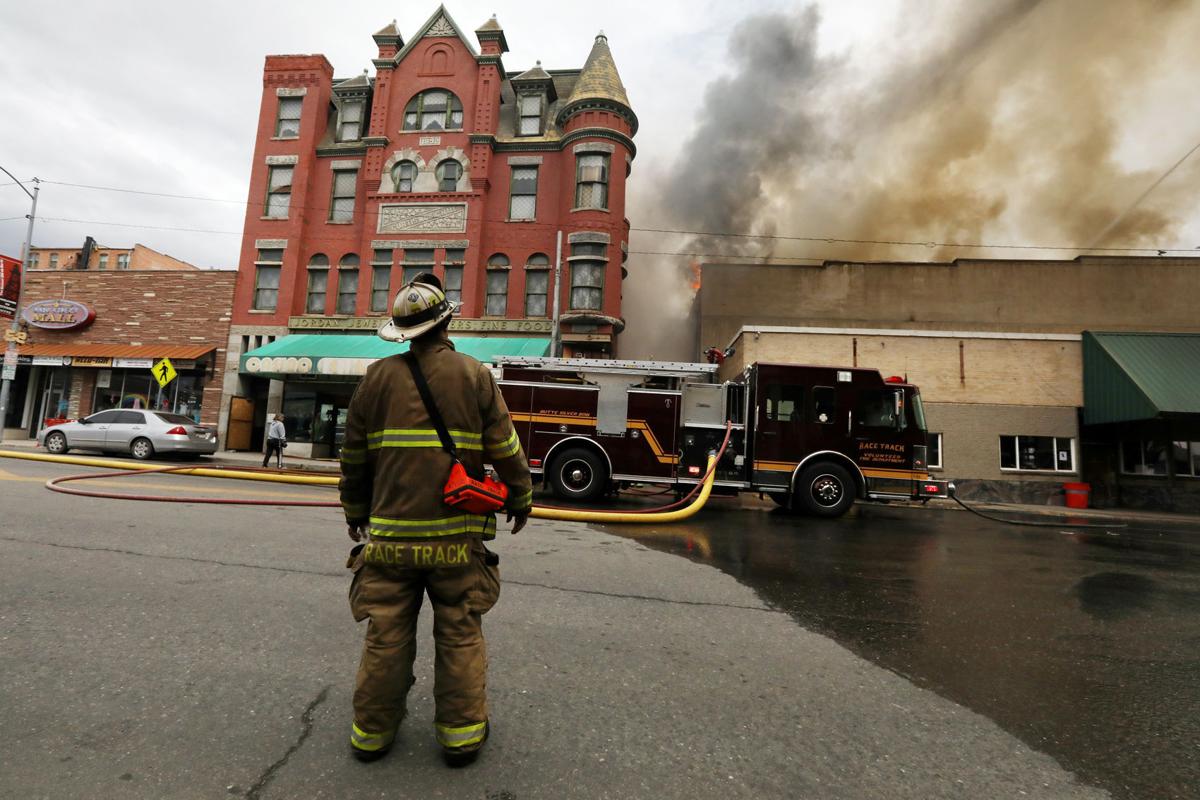 A firefighter with the Race Track Volunteer Fire Department keeps an eye on the alley near the historic Curtis Music Hall as flames shoot out of the back of the M&M Cigar Store Friday morning in Uptown Butte.

Firefighters say an early-morning fire that gutted the iconic M&M Cigar Store in Uptown Butte Friday likely started in the stove area, and before long, flames were shooting though the ventilation system.

Workers closed the M&M and left at 12:30 a.m. and firefighters were called at 3 a.m., said Butte-Silver Bow Fire Marshal Zach Osborne. Two firefighters got inside quickly to find flames coming from the hood system above the stove and grill.

The fire spread rapidly and was soon rolling over firefighters’ heads. They got out, and by the time they went back in, fire had spread to the ventilation system and flames took off, Osborne said

Osborne said they’re fairly confident, but not certain, the fire started in the stove area. He said there might be too much damage and destruction to ever determine precisely what caused the fire but an investigation continues.

The fire was brought under control in a couple of hours, but flames surfaced again and again throughout the day.

The Butte-Silver Bow Fire Department and the Big Butte, Race Track and Boulevard departments worked together to try to save the irreplaceable building.

Doherty at noon said the fire had not reached any other buildings.

And smoke. Smoke had run through and saturated the neighboring businesses. For a while, it billowed from the hatch in the sidewalk in front of the M&M.

No injuries were sustained from the fire. In a close call at 11:50 a.m., a piece of metal from the roof fell to the sidewalk below, just missing a firefighter.

Firefighters from a ladder bucket detached the giant, neon M&M sign from the building and safely brought it down with the use of a private contractor's crane at about 3 p.m. It will be put in storage for now.

Butte-Silver Bow Chief Executive J.P. Gallagher said earlier in the afternoon that workers were doing everything they could to save the sign within safety parameters. A top corner of the sign is charred, but it’s mostly intact, including the neon tubing.

“Safety is the number one priority,’’ Gallagher said. “But that sign is so important to this community, we’re going to do what we can to save it.’’

Everything within the side walls and the facade was demolished by 6:30 p.m., so they could get to collapsed material that continued to burn. The debris will be removed bit by bit. The process will likely take days.

From early on, local businesses provided food and coffee to the firefighters, among them the owners of the Party Palace and Gamer’s Café.

Many others offered their support as well, Doherty said.

"We can't express enough gratitude towards those businesses," Doherty said. "Our heart goes out to these uptown businesses that were affected by this. The whole historical nature of this facility is a crushing blow. Not only to Butte, but the state of Montana, and the United States."

Across the street, Dave Andrews, the general manager of Metals Sports Bar and Grill, was almost too choked up to speak.

“My father worked there for 20 years in the basement,” he said. “So a lot of memories.”

Jon Wick, owner of 5518 Designs on Main Street, woke to the news at 6 a.m. and grabbed the clothes nearest to his bed. Driving, he saw the smoke, and then the famous M&M.

“It was heartbreaking,” he said, the phrase echoed over and over among the morning’s onlookers.

Wick doesn’t tell folks the address when they ask where his shop is.

“I tell people we’re two doors up from the M&M. That’s our location,” he said, watching ash and debris fall from the building. “That's how much of an icon and a landmark it is to this town. You almost take something like the M&M for granted. It’s been here so long that you think it’s going to be here forever.”

Many mentioned the heart-wrenching timing of it all.

Selina Pankovich, owner of the M&M, was gearing up for Music on Main, and had plans to develop the upstairs.

“I am just heartbroken for her,” Wick said.

Gallagher was on the scene, watching on as flames built back up in the front of the building and poured from the broken windows on the main floor.

"It's like a loss of a family member. The whole community is going to grieve,"  Gallagher said.

The county will support Pankovich in every way it can, Gallagher said, and took some comfort in the community’s resilience. He said most of the community is numb with loss at the moment, but Butte will come together as it does in a time of need.

“I know the spirit of our community will rally behind this," he said.

On the scene early Friday morning, Battalion Chief Jim Merrifield said there was smoke in every orifice of the building.

"The fire was on the roof and spread throughout the building through the duct work," he said.

About 30 firefighters responded and at 6:30 a.m., two were on a ladder truck moving about in a bucket examining the damage. The upper-store windows were blown out and fallen bricks were piled about the sidewalk.

Owners of the building next door, OMG! Mongolian Grill on Main Street, received a phone call at 4 a.m. but nobody was on the line.

Tom Cronnelly recognized it was a county number, probably from the fire department. When he found out what was happening, he raced to the scene of the fire.

“It just exploded,” he said.

Cronnelly said he was concerned for his building, but his heart was on the one in flames next-door.

He hugged Pankovich, owner of the M&M, and told her, “You’re a tough woman. You’ll be fine.”

“I know I’ll be fine,” she responded. “I’m just worried about Butte.”

Separated from the M&M by just a narrow alley, Gamer’s Café on West Park Street was damaged with water and smoke.

As a young man in the 1980s, Cote worked in the M&M as a bartender. Like many on Friday, he remembered well how the kids — the drinking age was 18 then — descended upon the bar when everywhere else closed at 2 a.m. to eat and keep the party going.

The M&M is one of Butte’s most historic landmarks, having opened in 1890 by Sam Martin and William Mosby.

It was closed from 2003-2005 and from 2009-2011 after a run of more than a century where the doors never closed. Sam Jankovich purchased the property in 2011 and reopened it in May that year but closed it in October 2014 amid legal and financial troubles.

Butte restaurateur Ray Ueland announced in May 2015 that he had purchased the building and it reopened in November that year. He wouldn’t disclose the price, but it was lower than the $495,000 Jankovich had previously asked.

Ueland later sold the bar to Pankovich, and she has operated it since.

The M&M has been an icon in Butte and in Montana but its fame and notoriety stretches beyond that. People traveling across the state on Interstates 15 and 90 have stopped in Butte just to visit the M&M, having been there before or heard about it.

Sheriff Ed Lester said it was simply a “legendary place.”

“Everyone from Butte has stories about what happened at the M&M,” he said Friday morning. “You could have a few drinks, gamble, watch a fight and have the world’s best ham and cheese omelet — all in one place.”

Photos: A look at Butte's iconic M&M Cigar Store through the years

Pat Sponheim, Montana’s legendary “Piano Pat,” who entertained patrons of the Sip 'n Dip lounge from the keyboards for more than 50 years, has died.

Love at the M&M: Couple marries in Butte bar

It’s no secret that the historic M&M Bar & Cafe is a place that harbors memories for Butte residents and Montana Tech students alike. 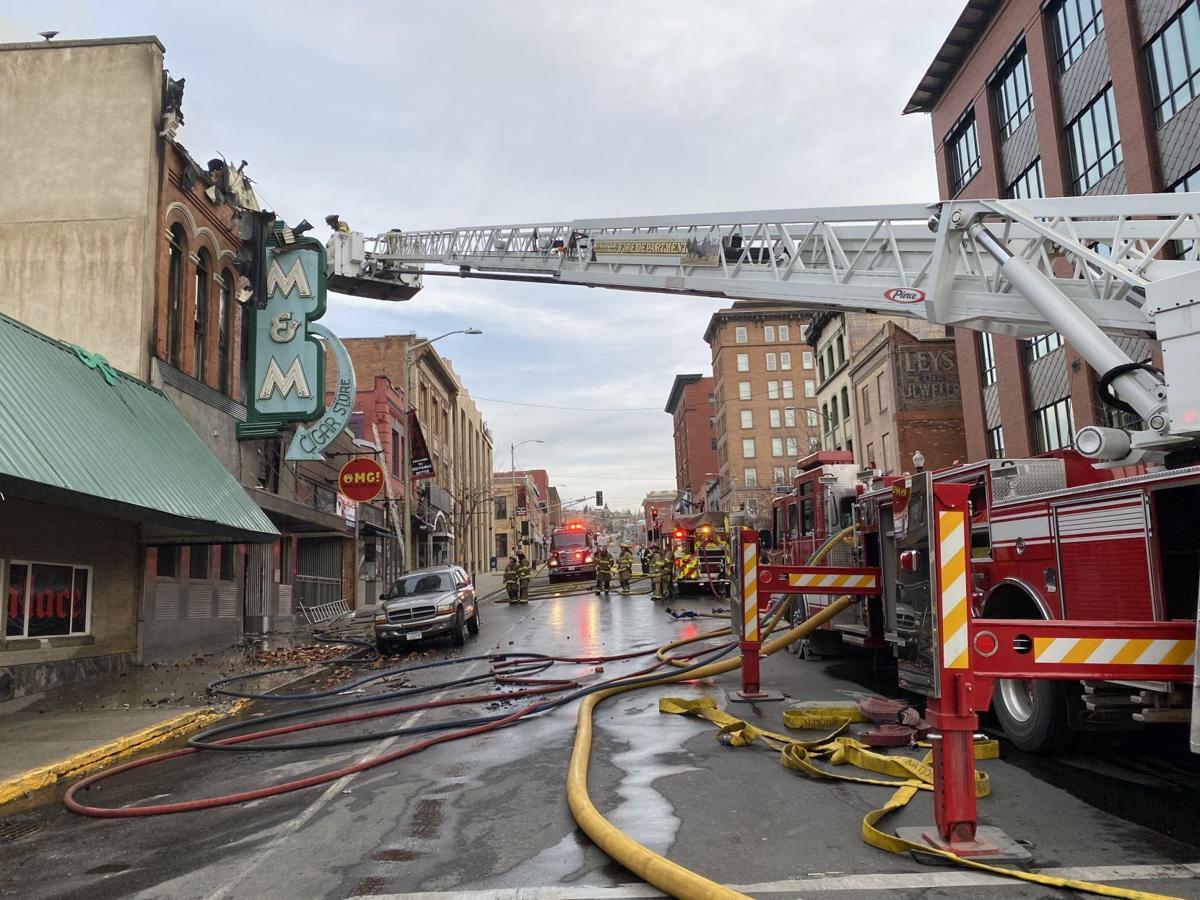 After watching firefighters battle a blaze all morning and into the afternoon at the M&M Cigar Store, Selina Pankovich, center, owner of the historic tavern smiles as she stands near the iconic sign that Butte firefighters saved from the burning building on Friday afternoon on Main Street in Uptown Butte.

Everything within the side walls and the facade of Butte's M&M was demolished by 6:30 p.m. Friday.

Butte Silver Bow Fire Department firefighters work form the air and the ground to knock down the flames shooting out of the historic M&M Cigar Store on Friday afternoon in Uptown Butte.

A firefighter with the Race Track Volunteer Fire Department keeps an eye on the alley near the historic Curtis Music Hall as flames shoot out of the back of the M&M Cigar Store Friday morning in Uptown Butte.