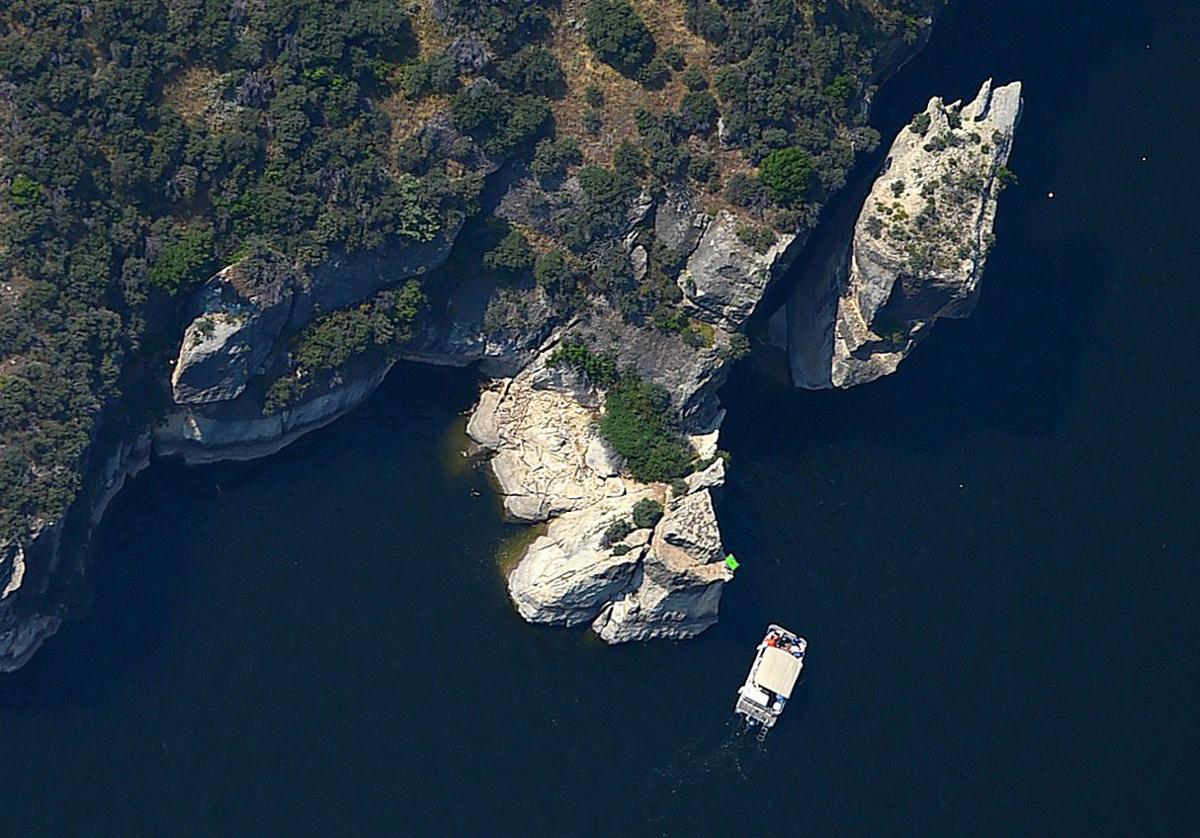 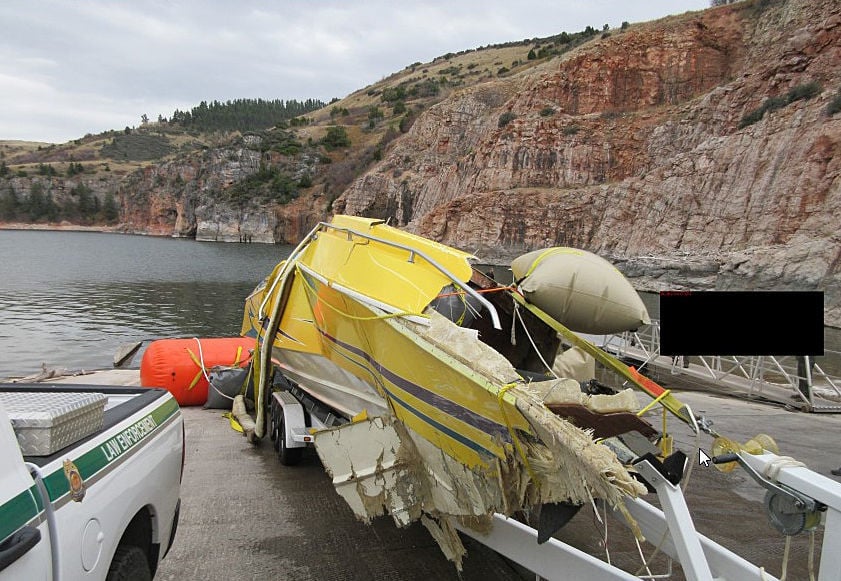 After being floated to the surface and towed to the Ok-A-Beh Marina, the damage to the bow of Robert Ludwick's Kachina powerboat is evident. The boat may have struck the canyon wall when it was traveling at 54 mph.

The driver of a 34-foot powerboat may have been cruising at 54 mph when he crashed into a cliff within the narrow confines of Bighorn Reservoir in August.

The Aug. 11 crash killed the boat’s three passengers and caused injuries that led to the death of Robert Ludwick, 63, of Billings, four weeks later. Killed in the crash were Tammy Scoville, 58, of Acton; her son Christian Scoville, 35, of Billings; and Nathan Kelley, 36, of Billings.

The information is found in National Park Service investigative reports obtained by The Billings Gazette through a Freedom of Information Act request. The reservoir is surrounded by the Bighorn Canyon National Recreation Area, which is managed by the Park Service.

Details of the crash were withheld from the news media until the FOIA request was filed. The documents shed some light on the possible cause of the wreck, and related photos reveal the extensive damage done to the front of the boat emphasizing the destructive force of the impact.

The estimated speed of the Kachina boat, powered by two 470 horsepower racing engines, was based on the fact the speedometer needle was stuck at 54 mph. Two of the boat’s four throttle sticks were also all the way forward, the other two were in neutral.

According to the documents, on Aug. 11, 2018, at about 6:30 p.m. the boat was traveling north on the reservoir when it struck the canyon wall on the front right side leaving yellow and white paint along the cliff wall for about 28 feet about 3 feet above the water line.

“Based on the height of the transfer marks and the colors of the boat, the boat was heeling to the port (left) side at impact, indicating the operator of the boat attempted to turn away from the cliff,” the documents stated.

“Upon impact the front passenger compartment separated from the hull.

“The fasteners on the rear of the passenger seat had pulled loose indicating a forceful forward impact.”

When questioned by an investigator two days after the wreck, Ludwick said he had no recollection of the event.

The investigative report said Ludwick was driving the boat by himself on the north end of the reservoir near Dayboard 7 when he was flagged down by Christian Scoville and Kelley, who were interested in the powerboat.

Ludwick was making mixed drinks and also had a case of beer on board and was seen drinking a wine cooler. Several hours after the wreck when his blood was drawn at the hospital, Ludwick’s alcohol level was 6 milligrams per deciliter, an amount below what’s medically considered a low level of intoxication, which ranges from 10 to 50 milligrams per deciliter.

On the same afternoon, Ludwick gave two other people a boat ride. Their names were redacted from the report. One of those people told investigators Ludwick told them he was driving 70 mph but that the boat was capable of 88 mph. After stopping and mixing his passengers a drink and having one himself, he returned them and picked up the Scovilles and Kelley for a ride. Tammy Scoville was sitting next to Ludwick while Christian Scoville and Kelly were sitting in the bow of the boat. When they did not return after an hour the other boaters became concerned and began looking for the missing group.

One boater told investigators he saw Ludwick’s boat at about 8:40 p.m. speed into the Cabin Creek inlet, after which he heard a loud bang “and then saw the boat heading back toward the direction it came from. He said it was getting dark and hard to see very well, but he heard the boat idling still and thought that everyone was OK.” The witness was about a half mile from where the boat crashed.

A Bighorn County Sheriff’s deputy told a National Park Service ranger that he was the first person on the scene of the boat wreck at about 8:30 p.m. The deputy, who was off duty and fishing, said prior to the crash “a ‘large yellow cigar boat’ passed him, at a high rate of speed just north of Dayboard 9.” By the time the deputy arrived in the area “around Dayboards 5-7, he and his passenger observed what they thought to be boat or boat pieces in the water.”

The deputy saw Tammy Scoville floating nearby. She was already dead. Ludwick was spotted floating on his back near a rock ledge, but the deputy needed help to get the 200-pound man into his boat, so he returned to Ok-A-Beh Marina and called the incident in to Bighorn County dispatch. A park ranger responded and the two returned to find Ludwick with severe facial cuts sitting on a rock ledge and yelling for help. He was loaded into the boat and rushed back to the marina where he was taken by helicopter to St. Vincent Healthcare in Billings.

Tammy Scoville’s body was recovered the next morning. But her son and Kelley’s body were still missing. Two days after the incident sonar was used to scan the area of the wreck. Three days later a dive team, a remotely operated underwater vehicle and cadaver dogs were brought to the scene.

On Aug. 15 — four days after the crash — the ROV located the sunken boat. Kelley’s body was found outside of the boat at a depth of 95 feet. The boat was resting upside down underwater. Two days later a wrecker was loaded on a barge and taken to the site where, with the help of divers, the boat was lifted enough to recover Christian Scoville’s body.

On Oct. 24 and 25 the dive team returned to the crash site and raised the boat enough so that it could be towed to the marina and loaded on a trailer for transport to the Bighorn Canyon NRA’s headquarters parking lot where photographs were taken and evidence collected.

The final body has been recovered from Bighorn Lake after a boating accident a week ago left two three people dead and one injured.

Another body has been recovered from Bighorn Lake after a boating accident Saturday, and crews are still searching for a fourth person related…

A boating accident on Bighorn Lake Saturday night left a Billings woman dead and one man hospitalized in serious condition, according to a pre…

BOZEMAN — A semitrailer hauling beehives overturned on a Montana road, spilling diesel fuel and honey on the roadway.

Montana fishing report: No license required to fish this weekend

Sunday is Father’s Day and would be a good time to spend out on the water fishing.

Trout numbers in south central Montana’s Bighorn River are at record lows this spring, according to scientific surveys completed recently by M…

On Thursday, the Bighorn Lake level was 3,642.5 feet, two-and-a-half feet into the flood pool, and is expected to continue rising over the nex…

Working Dogs for Conservation will be at Bighorn Canyon National Recreation Area July 1-13.

Going up! Some reservoir levels peak for holiday weekend

Crow dancers to perform in Lovell on July 17

Johnny Tim Yellowtail, a great-great grandson of Robert S. Yellowtail and a descendent of Chief Gray-Bull, will be at the Cal S. Taggart Visit…

After a busy summer Bighorn Canyon National Recreation Area is closing facilities for the winter.

After being trailered, the badly damaged boat was taken to the National Park Service's parking lot where detailed photographs of the damage were taken for the investigation.

After being floated to the surface and towed to the Ok-A-Beh Marina, the damage to the bow of Robert Ludwick's Kachina powerboat is evident. The boat may have struck the canyon wall when it was traveling at 54 mph. 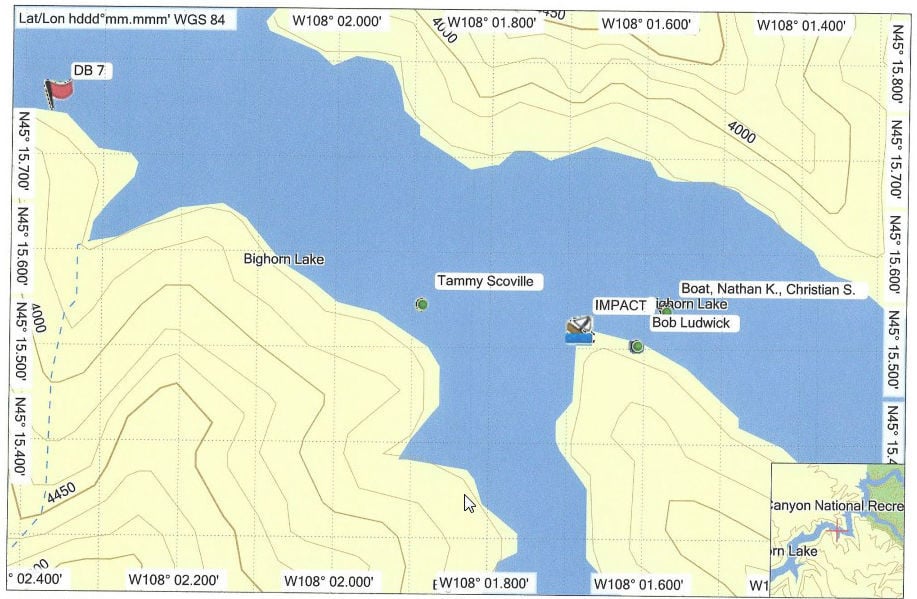 This map shows the area where the crash occurred on Bighorn Reservoir as well as where the occupants of the boat were found. 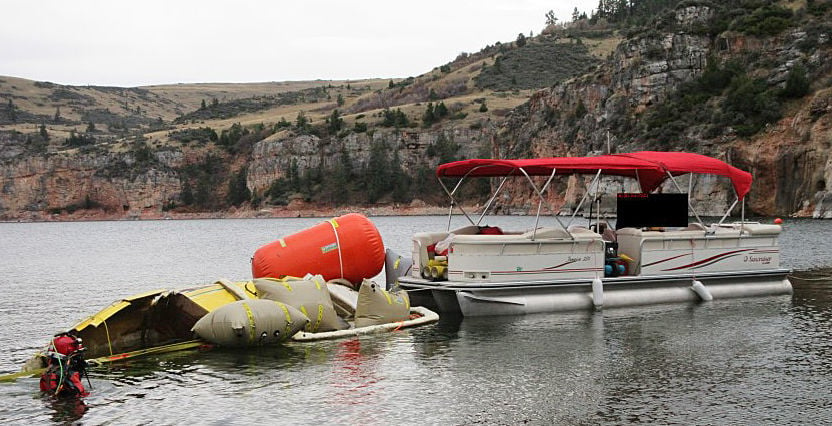 A diver, lower left, helps as the wrecked Kachina powerboat is raised from a depth of 95 feet in Bighorn Reservoir last October. 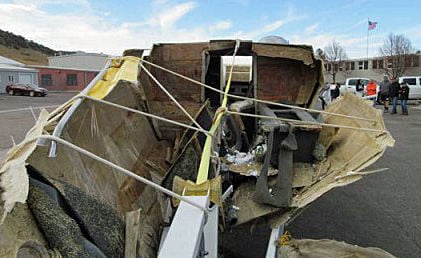 Much of the bow of the 34-foot powerboat was destroyed. Two of the boat's four occupants were sitting in the boat when it crashed.