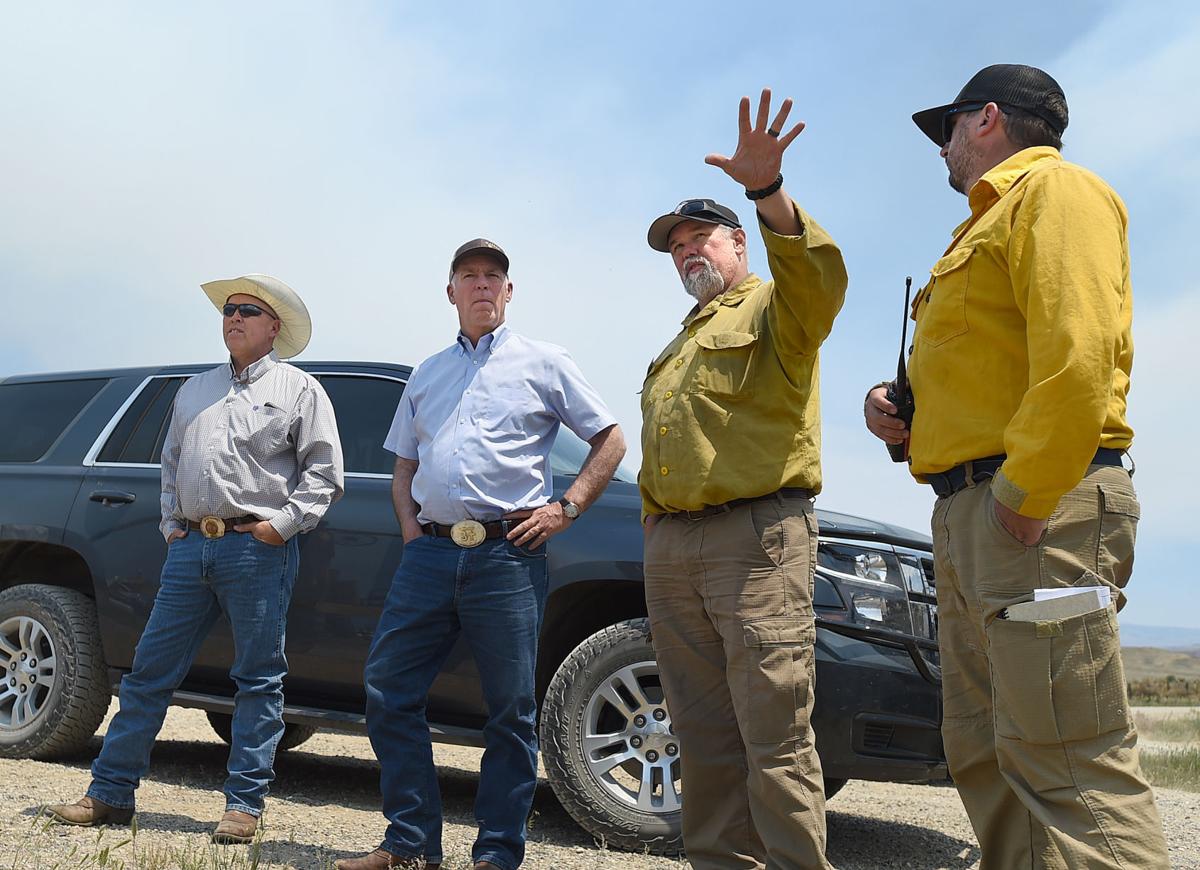 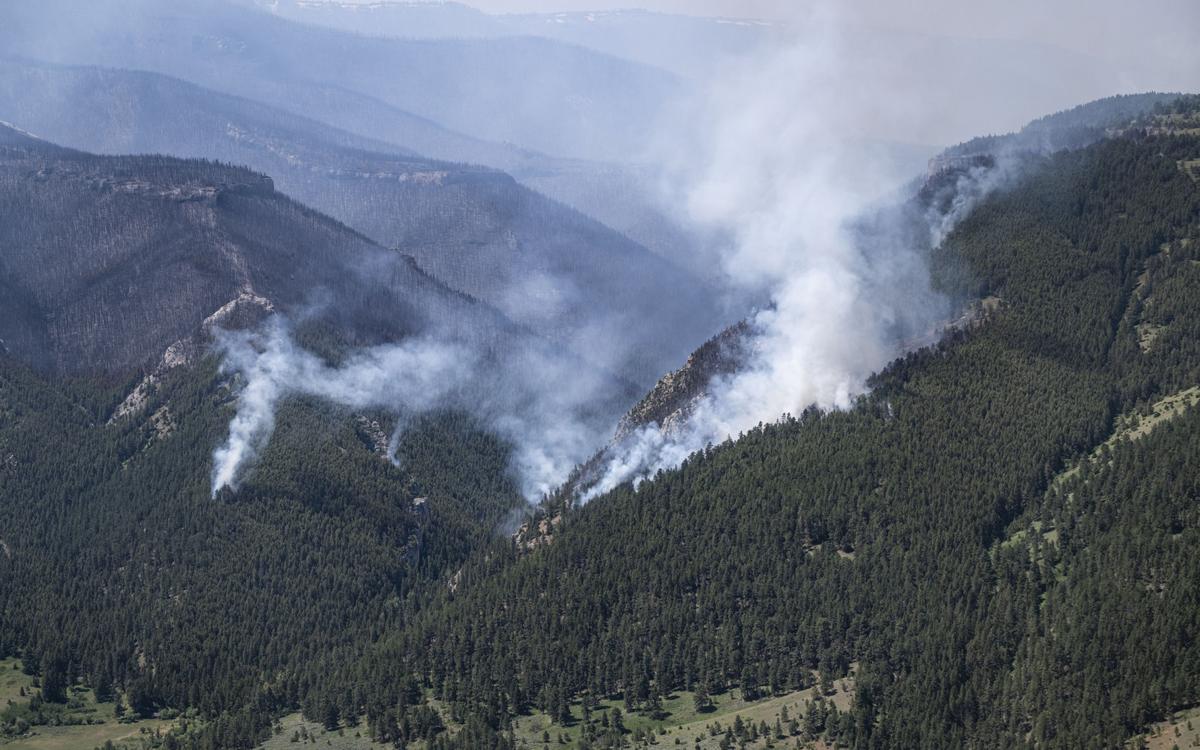 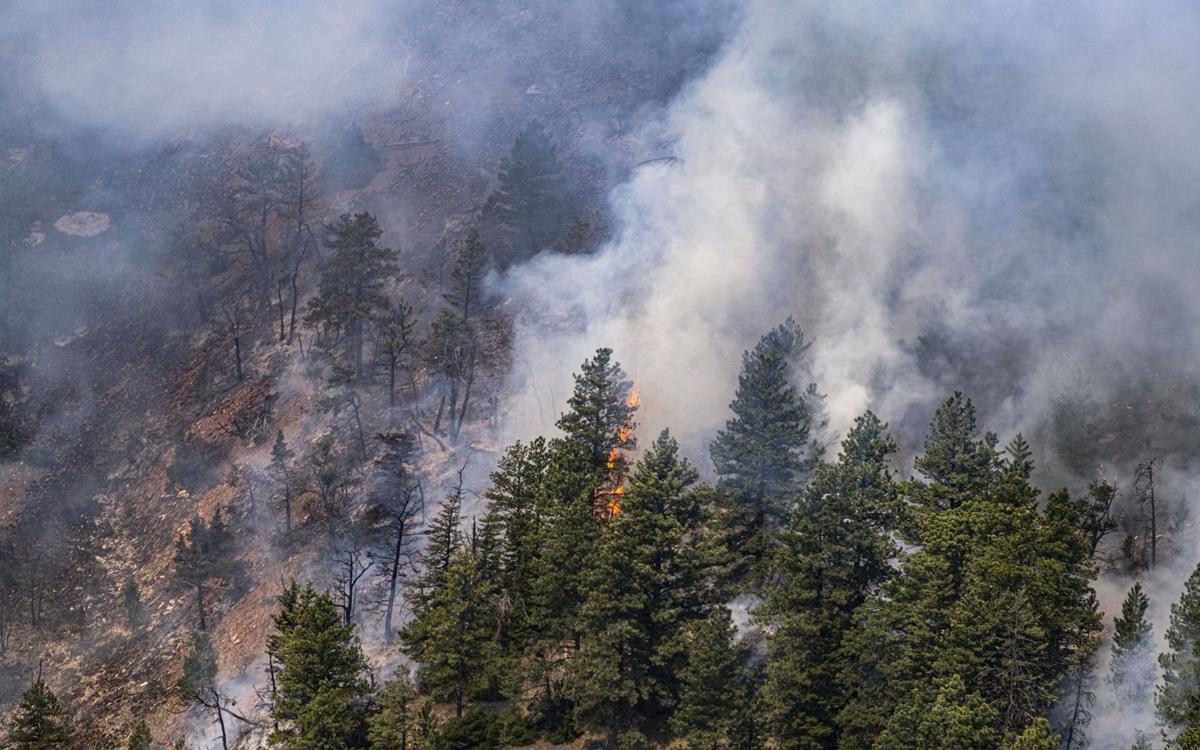 BELFRY — The spread of the Robertson Draw fire near Red Lodge slowed Thursday, with the total area burned reported to be over 24,000 acres after growing exponentially earlier in the week.

“We’re seeing fuel conditions that we don’t normally see this time of year in this country until late July, the early end of August,” said Brett Pargman with the Northern Rockies Incident Management Team 4 during a briefing Thursday attended by Gov. Greg Gianforte.

Since the start of the fire Sunday, which county and U.S. Forest Service personnel are investigating as being caused by a person, eight homes have been lost along with 13 secondary structures. A GoFundMe has been launched for a Red Lodge resident, the manager of the Red Lodge Senior & Community Center, who lost her home. Another fundraiser has been started on the website for another family who lost their home between Belfry and Red Lodge.

The priority for the day will be securing the northern edge that threatens Red Lodge, Pargman said. The long-term goal for crews will be building an anchor on the southern part of the fire where it began, and preventing its western portion from spilling over a ridge and possibly running into the Beartooth Highway.

The state’s fire fund is five times that of the typical annual cost in wildfire damage, Gianforte said after the briefing. Although his office is bracing for an above-average year in terms of wildfires, he said he feels secure with the resources that are available. FEMA approved a request from the state request Wednesday for a federal Fire Management Assistance Grant, with the agency assuming 75% of the cost of the damage from the Robertson Draw fire.

“A majority of the fires in Montana are human-caused … With the drier than normal conditions in the woods, I’m asking all Montanans and visitors, just be careful out there,” he said.

Carbon County Sheriff Josh McQuillan said a suspect has been identified in the cause of the fire, and the county attorney is expected to make a decision on whether to file charges next week.

Gianforte joined county and fire management officials for a firsthand look at the damage from the fire. Standing at the entrance to a local ranch, a blanket of ash stretched across the dryland pasture and into the mountains. Nearby sat a bulldozer used by firefighters two days prior to save houses that dotted the land.

All of the homes destroyed in the dryland pasture to the east of the mountain were in the Gold Creek area, Pargman said during the briefing. High winds brought the fire out of the mountains and into the sage of the valley floor “like a blowtorch.” Several head of cattle were moved to the safety of a nearby alfalfa patch, and horses also had to be driven out of the area.

County Commissioner Scott Miller worked alongside road crews, personnel with the Forest Service and local firefighters Tuesday in building the breaks and berms that stopped the fire from consuming more homes. Miller said flames stretched as high as 30 feet near crew members who operated dozers and graders.

“People lost their homes, and that’s a horrible thing, but I have to say that this was a success because many other people have homes that they’re going to be able to come back to … The firefighters should be very proud of the job they did here,” he said.

Miller, who has served as the county commissioner of Bridger District for about six months, said he’s never seen anything comparable to the damage from the Robertson Draw fire in Carbon County. Sen. Steve Daines is also planning to visit with fire managers in Belfry on Friday.

The Crooked Creek fire also continued to burn 25 miles east of Bridger in the Pryor Mountains near the southern border of the Crow Indian Reservation on Thursday. The Carbon County Sheriff's Office has issued a pre-evacuation warning for residents in the Sage Creek area, and closure orders are in place for public lands in the area surrounding the fire.

The fire, which is burning mostly in timber litter and understory, has shown extreme behavior and firefighters have observed crown fires, wind-driven fire runs and spot fires. Thursday morning the fire was estimated to be 5,100 acres in size. The Bureau of Land Management was expecting the fire to continue to grow north due to prevailing winds. Planned actions for the day included protecting critical infrastructure and both reinforcing and holding natural features.

The Federal Aviation Administration has also put a temporary flight restriction in place over the fire to create a safe environment for aircraft on the fire.

The fire is northwest of the Pryor Mountain Wild Horse Range, but is not impacting the wild horse herd, according to a statement from the Bureau of Land Management.

Nancy Cerroni, the director of operations for the nonprofit Pryor Mountain Wild Mustang Center in Lovell, Wyoming, said the fire is concerning because of its potential effect on the wild horses and on area ranchers and residents.

Cerroni estimated if the fire were to spread into the horse range that there would be 130 to 140 horses most affected. The horses in all likelihood would be able to move to a lower elevation should the fire reach the range, but Cerroni said the concern from there would be that there might not be enough water at lower elevations to support them since the horses rely on ponds and existing snow along the range. "The rest of the mountain's pretty dry," she said. "There's very little water source down there for that many horses."

If the fire were to consume some of the upper meadows where the horses graze, that could also affect the animals.

She said the area between the horses and the fire could act as a decent buffer because it is traditionally among the last areas to dry out.

June is typically an active period for the horses in which they congregate on the mountain and foals are born. Cerroni and her husband also lead tours of the area, some of which she has started to cancel due to fire-related closures on the mountain. In a non-pandemic year some of those tours would come from international customers. This year Cerroni said she's booked tours for people from Georgia, New York, Maine, Washington, California, North Carolina, Minnesota and Wisconsin. Some of those people set up their tours last year.

Cerroni said she had been on the mountain Tuesday and saw the plume of smoke from the Buffalo Pasture fire to the east and the Robertson Draw fire to the west.

"And then we came down and there was the (Crooked Creek) fire. In one day three fires were just right here. I don't know what the word is. Intimidating, scary," she said. "It was something."

The Buffalo Pasture fire in the Bighorn Mountains on the Crow Indian Reservation also continued to burn Thursday. It was more accurately mapped Wednesday at 328 acres, according to Jon Kohn, a Crow Agency BIA Fire and Aviation public information officer.

Local Crow firefighters are assigned to the fire, as well as other firefighting  crews, multiple fire engines and a helicopter. A Type 3 Incident Management team is also on the fire. Kohn said that the ultimate goal is suppression, but that to this point the fire is essentially acting as a prescribed natural fire in that it is cleaning up the forest floor in the Little Bull Elk Canyon and doesn't appear to be killing trees.

Fire updates had previously noted that the thickly forested floor of the canyon contains somewhere between 800 to 1,000 tons per acre of heavy timber that has not burned in years.

The ongoing work of firefighters and cooler weather may ultimately allow firefighters to go into the canyon bottom but for the time being that remains unsafe, according to Kohn.

Federal and county resources also continued to deal with the Hollowbreast fire 11 miles southeast of Lame Deer in Rosebud County. That fire is estimated to be 507 acres and is described as a coal seam fire.

A fire in the Pryor Mountains reported at around 7 p.m. on Tuesday was estimated Wednesday afternoon to be 5,000 acres in size.

The Robertson Draw fire burning south of Red Lodge grew to 21,000 acres by Wednesday morning, and officials have determined that the fire was …

The wildfire destroyed one home, an outbuilding and two campers on the edge of a small town in northeastern Wyoming.

A 55-year-old man from Bridger who admitted spilling and igniting gasoline while repairing a dirt bike on U.S. Forest Service land has been charged with causing last week's Robertson Draw fire, which has burned 29,601 acres south of Red Lodge. 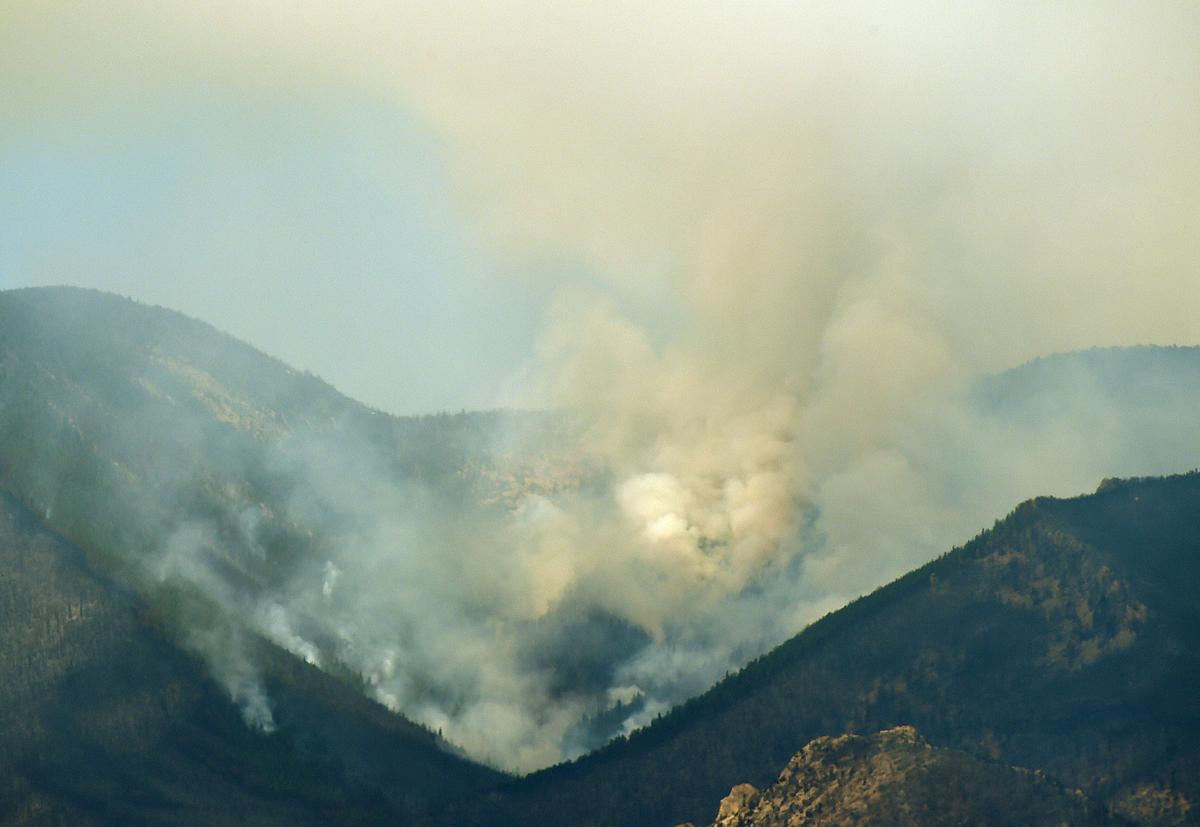 Smoke rises from Grove Creek in the Robertson Draw Fire on June 17. 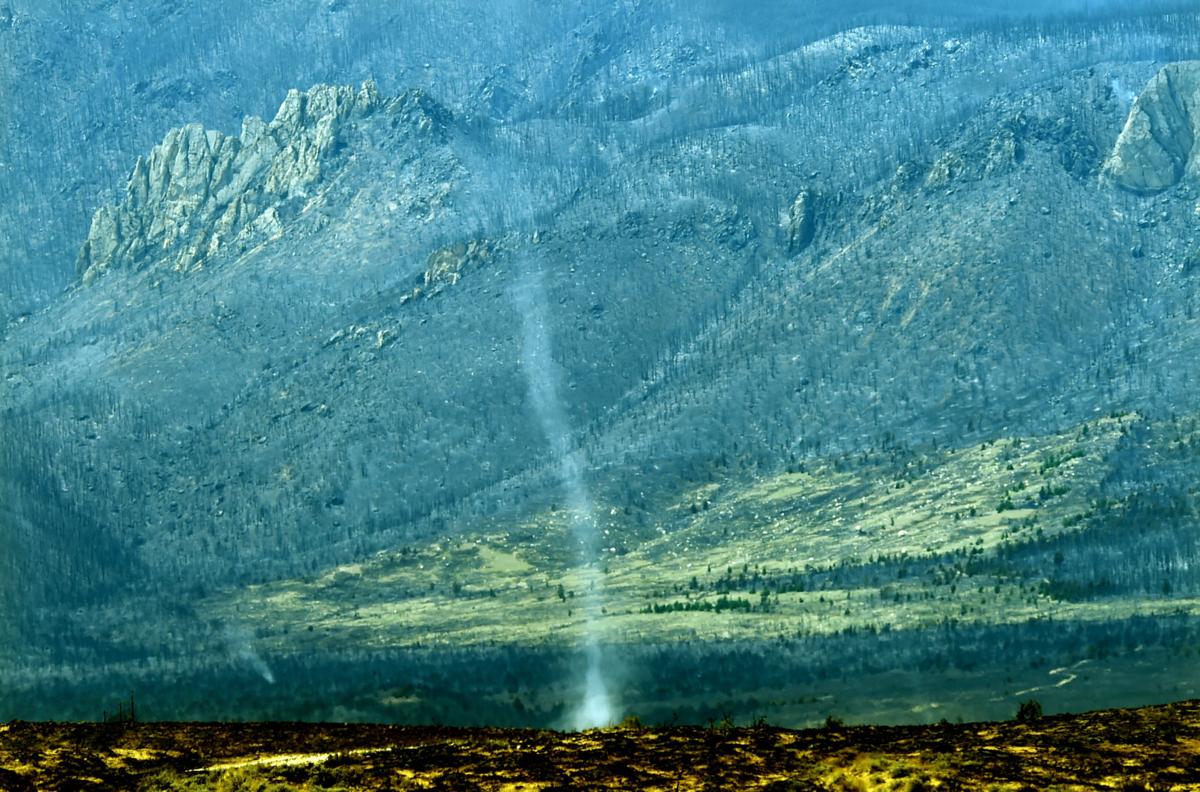 A dust devil rises from the blackened Robertson Draw Fire on Thursday, June 17.