Forty-six of Montana’s 56 counties have opted for mail ballots in the November election, according to a tally posted at 5 p.m. Friday by the Montana Secretary of State’s Office.

Gov. Steve Bullock gave the counties the option of using the mail ballots following a request in July from county clerks across the state. Mail ballots are similar to the absentee ballots already used by roughly three-quarters of Montana voters.

In-person voting will still be allowed in all counties, and voters also have the option of dropping off their mail ballots in person, either at county voting offices or in drop-boxes.

Because of the pandemic, all Montana counties used mail ballots in the June primary election, which saw near-record turnout.

Counties had until Friday to turn in their ballot plans. Only Broadwater, Carbon, Fergus, Mineral, Petroleum, Powder River, Powell, Stillwater, Treasure and Wibaux counties did not submit mail ballot plans, according to the Secretary of State’s Office. 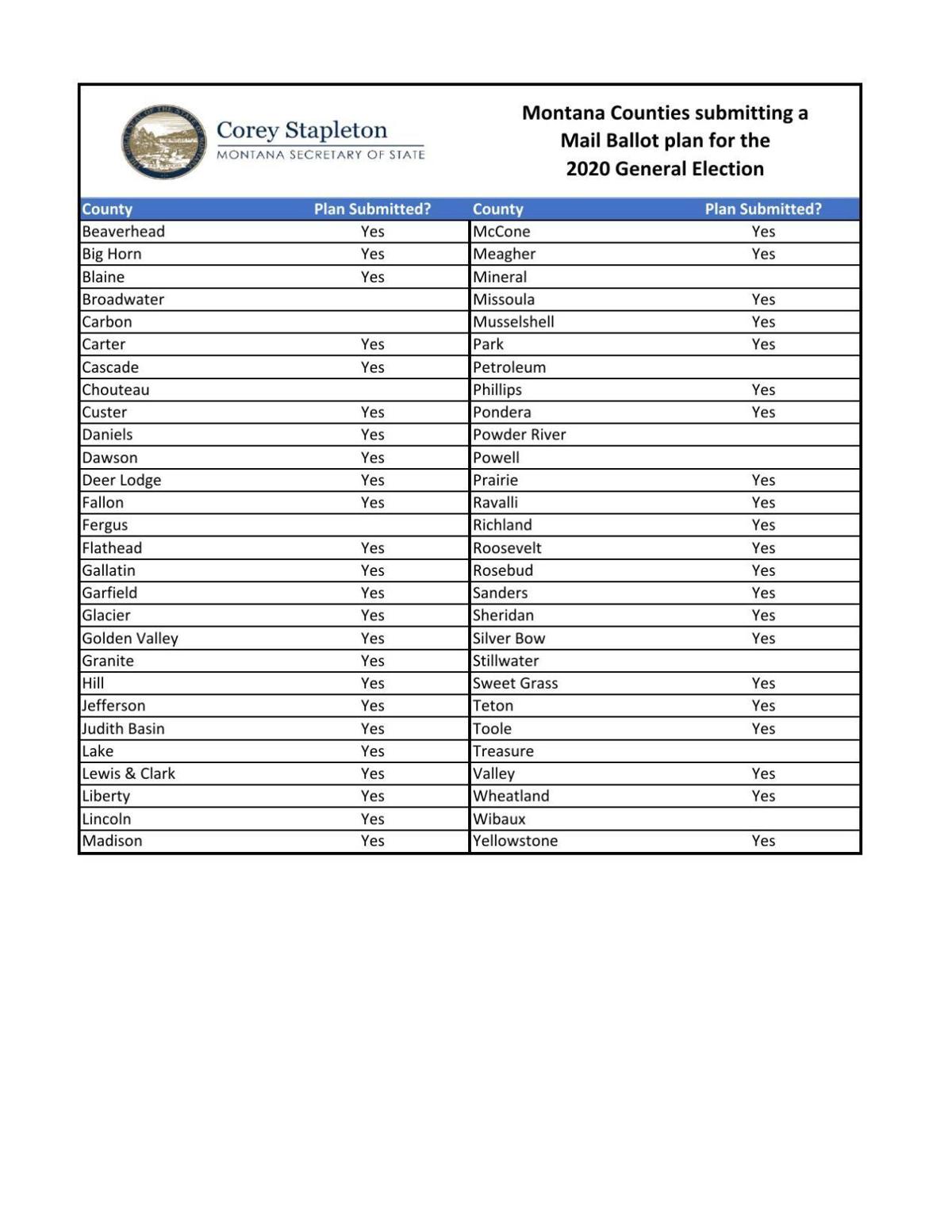 County clerks have cited difficulties in finding enough election judges for traditional poll elections, given that the judges tend to be older and at higher risk for suffering severe symptoms from the coronavirus.

Mail ballots have become a source of contention in some quarters. Earlier this week, the re-election campaign of President Donald Trump, along with the Republican National Committee, the national Republican Senatorial Committee and the Montana Republican State central Committee sued to block mail ballots in Montana. Friday, Bullock, a Democrat who seeks to unseat incumbent Republican U.S. Sen. Steve Daines in November, said that request, if granted, would “inject chaos into the election.” (See related story.)

Similar lawsuits targeting mail ballots have been filed around the country by Republican groups, while Democrats have suits over voting regulations they see as restrictive.

When the suit was announced, Bullock cited support from the Montana Senate president and speaker of the Montana House, both Republicans, for the June primary.

House Speaker Greg Hertz, R-Polson, pointed out in an email that Bullock issued the primary directive in March when the pandemic was still in the early stages, but that he could no longer support a general election mail ballot “now we know COVID isn’t as bad as once anticipated.”

A Montana Democratic Party official is raising questions about where a Public Service Commission candidate's residence really is.

Montana Democrats are rolling out "The Dude" again as they seek to burnish the party's November ticket with some star power and counter GOP heavyweights such as Vice President Mike Pence.

On Tuesday, an attorney for Montana told a judge that not enough voters in the state had been affected by a law restricting ballot collection …

Republican candidate Austin Knudsen was relentless in highlighting his challenger's limited experience, while Democrat Raph Graybill painted Knudsen as "dangerous" and an "extremist."