Republican lawmakers quickly torched the new rules this year and instead are seeking changes that would make it far tougher for residents to bypass the statehouse at all.

Scott and others angry about the swift repeal of the voter-backed anti-corruption initiative have turned to the 2018 ballot, hoping to enact a new constitutional amendment that even the Legislature can't touch.

"I was disgusted that we had to go through this again," said Scott, a 75-year-old Democrat who collected signatures for the new campaign after seeing lawmakers dismantle the first ethics package. "We had already told them once what we wanted."

Legislatures from the Dakotas to Maine this year brushed aside voter measures, some working to hamper citizens' ability to pass ballot questions. In 2018 and beyond, states including Ohio, Maine, Missouri and the Dakotas could tussle over the states' ballot question systems.

The power struggle between the people and politicians is particularly stark in South Dakota, where supporters of new constitutional protections for ballot measures are competing against lawmakers who would curtail them.

One ballot measure proposed by a Republican lawmaker would ban out-of-state fundraising for initiatives, and another legislative plan would make it harder for constitutional changes to pass at the ballot box. Both would require voter support to take effect.

"In recent history, we haven't seen any year in which legislators have been so brash as they have been this year," Altic said.

Unless a state law or constitution prohibits a legislature from changing a law passed by ballot measure, lawmakers are permitted to do so and there's no basis for a lawsuit challenging such a move, said Paul S. Ryan, a vice president at the Washington watchdog Common Cause.

In Massachusetts and North Dakota, legislators delayed and changed voter-approved marijuana initiatives. Maine lawmakers killed a tax hike for schools, cut back a minimum wage measure and stalled a law allowing voters to rank their choice of candidates on the ballot.

Republican Sen. Roger Katz, who sponsored the minimum wage rollback to allow employers to pay less than minimum wage to workers who make up the difference in tips, said he believes most Maine voters who backed the hike didn't know about the tip credit issue.

Democratic Maine Sen. Justin Chenette said he saw an "assault on the democratic process" at the Legislature.

Ranked-choice voting supporters have embarked on a referendum do-over, seeking enough signatures for a vote to nullify the legislative delay and implement the system for the June primary elections.

Scott watched the South Dakota Senate send emergency legislation to the governor to scrap the ethics law, called Initiated Measure 22. That day, an airplane circled the Capitol with a banner that read, "Shame on you! Respect our vote!"

"'Under God the People Rule'?" Scott said, invoking the state's motto. "Obviously, the people did not rule with the IM22 rejection."

Republicans defended the reversal, saying the campaign to pass the initiative was deceptive and that the ballot measure was likely unconstitutional; a judge had put the measure on hold before it was repealed.

Supporters gathered more than 50,000 signatures — using volunteers and paid petitioners — for the 2018 constitutional amendment. It would require that laws changing the ballot question process must pass a public vote.

Lawmakers in at least 10 states have offered or approved proposals that would make it harder for voters to pass laws or change their constitutions since the 2016 election. The number will likely continue to grow next year.

After Arizona voters backed a minimum wage increase in 2016, Republicans passed two laws targeting initiatives. One law allows measures to be tossed out for paperwork or language errors, and the other makes it illegal to pay petition circulators by the signature and easier to sue to block initiatives.

Republican lawmakers in several states have branded new offensives in the conflict as necessary to stop out-of-state special interest groups from meddling with local laws.

An Ohio Republican in November proposed a constitutional amendment to increase the number of signatures to get on the ballot and the vote total required for approval. Rep. Niraj Antani cited failed efforts on recreational marijuana in 2015 and on prescription drug prices this year, saying Ohioans are sick of outsiders "trying to buy our ballot."

South Dakota House Speaker Mark Mickelson is pushing a 2018 ballot measure to ban out-of-state political contributions for ballot questions, a move that would kneecap initiative fundraising. The proposed law wouldn't stop political candidates from taking money from outside the state.

Since Election Day 2016, Republicans have complained about outside interests experimenting with South Dakota's laws and constitution. Out-of-state donors pumped over $10 million into campaigns for or against the state's questions. For example, a California billionaire bankrolled an amendment that established constitutional rights for crime victims and a Massachusetts group funded the transformative government ethics initiative.

"It's a perversion of the initiated measure process," Mickelson said.

Meanwhile, citizen initiatives supporters want South Dakota to join at least 10 states that have provisions to protect ballot measures from lawmakers. Missouri activists have proposed a similar plan, but have struggled attracting people to help gather signatures, and Chenette, the Maine senator, proposed an unsuccessful constitutional amendment in October that would have safeguarded ballot initiatives for a year after their passage. He plans to try again.

Joyce Scott was among those angry and disappointed enough at the ethics initiative repeal to be out on the streets enlisting support to try again — channeling confidence from a year selling encyclopedias door-to-door. She said lawmakers' dismantling of the overhaul had cemented for her the need to safeguard citizen initiatives.

"Who would have ever thought that something that the voters passed, that the Legislature would just do away with it totally," she said.

A Montana State Prison inmate waited a month for medications to treat his asthma, seizures and diabetes. He was placed in an upstairs cell for…

Montana Rescue Mission asks for donations of ham, pies so it can serve 600 Christmas dinners

As Montana Rescue Mission prepares to serve up to 600 meals on Christmas Day, the agency says it’s in “desperate need of additional hams and a…

St. Vincent Healthcare Foundation has received a $1 million gift from retired Billings neurosurgeon Dr. John Moseley and his wife Cheryl, a re…

Man ejected from truck, killed in icy I-90 crash east of Billings identified

A 20-year-old man died Tuesday morning on Interstate 90, after his truck rolled over and ejected him about 20 miles east of Billings, accordin…

Zinke: US reliance on foreign minerals a security risk

After a man apparently tried to steal a car with a child inside, another man's help leads to arrest

Shermani Brown was picking up her 5-year-old daughter from school on Monday, holding her hand as they walked across the street back to her car.

A former Bureau of Indian Affairs officer admitted on Tuesday to coercing a woman into having sex, which led to her becoming pregnant.

BOZEMAN — When Kudos & Co., the Silicon Valley-based tech startup behind a new social media app for kids, announced in September it was op…

Sure, the holidays are all about friends, family and often one's deity of choice.

You know you're from Billings, Montana if you can recognize these photos

A Facebook group called "You know you're from Billings, Montana if..." is a place where Billings residents — old, new and former — gather onli…

15 animals banned by the state of Montana

Montana is known for its wildlife and natural areas, so a state permit is needed to import exotic species.

The GOP's $1.5 trillion tax package is on its way to Trump's desk. Here's what that means for you

So what's in the massive $1.5 trillion Republican tax package, what's not and what does it mean for most Americans?

A cold front sweeping through Montana isn't expected to bring much snow to the Billings area, but plummeting temperatures will push wind chill… 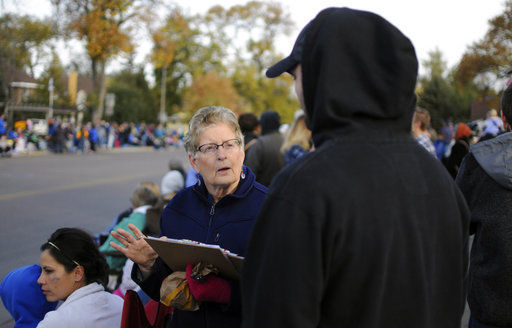 In this Oct. 14, 2017 photo, Joyce Scott, left, seeks signatures for a proposed South Dakota government ethics constitutional amendment in Brookings, S.D. The amendment would stop lawmakers from changing future ballot measures and the state's initiative system without taking the changes to a public vote. 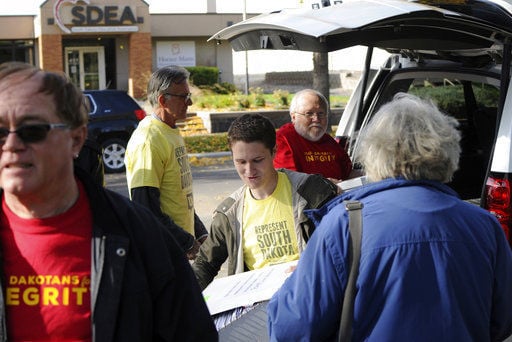 In this Oct. 18, 2017 file photo, Represent South Dakota spokesman Doug Kronaizl, center, and other supporters of a proposed government ethics constitutional amendment unload boxes of petitions outside the state Capitol in Pierre, S.D. The proposed constitutional amendment would stop lawmakers from changing future ballot measures and the state's initiative system without taking the changes to a public vote.