Omicron will push US deaths past 1 million, expert predicts

The Montana Federation of Public Employees, the Montana Farmers Union and two Montana citizens are asking the Lewis and Clark County District Court to temporarily halt signature gathering for Constitutional Initiative 121. The lawsuit alleges that Montana’s Attorney General Austin Knudsen and Secretary of State Christi Jacobsen did not complete requirements of House Bill 651, passed by the Legislature and signed into law last year. 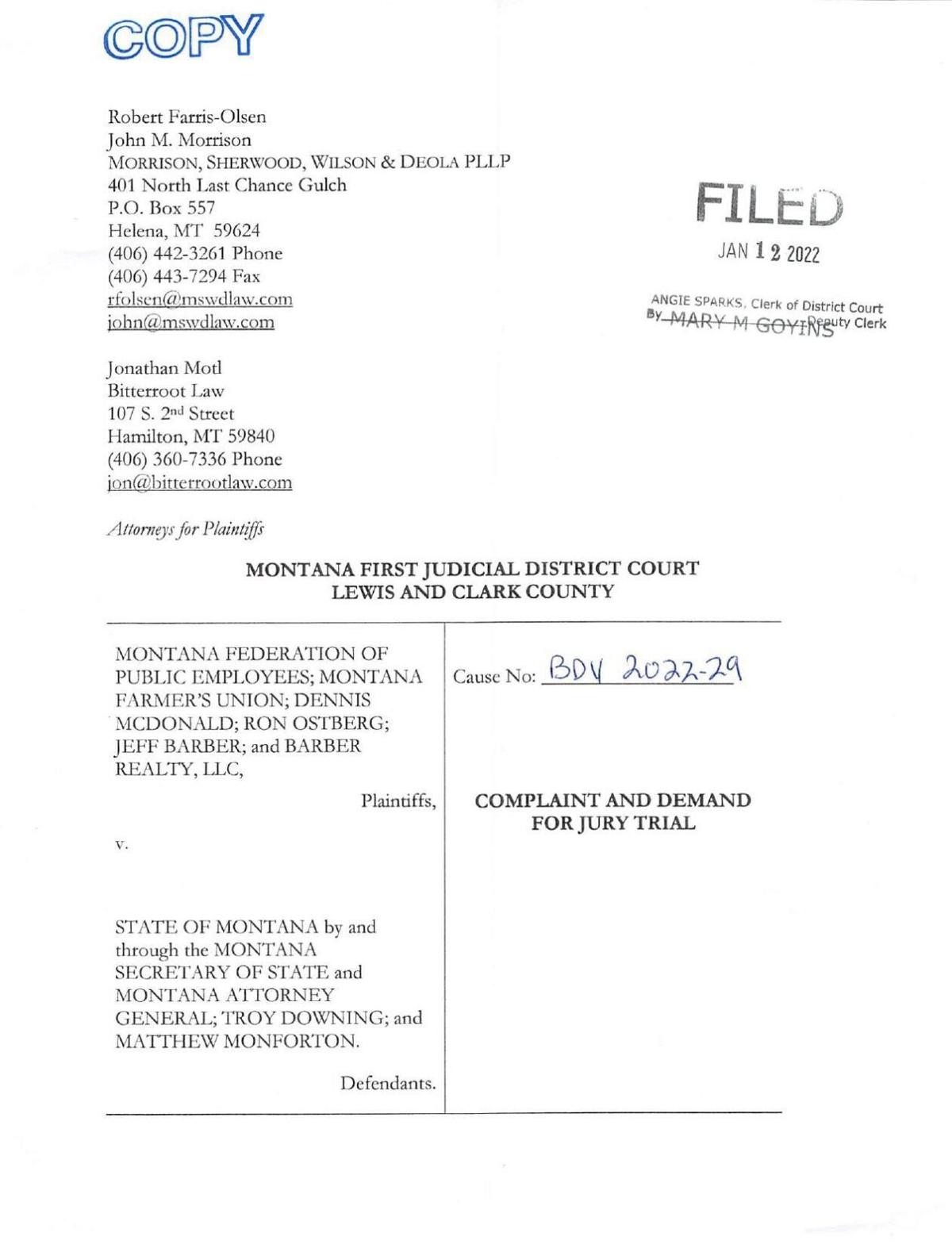 Jacobsen last week certified CI 121 for signature gathering brought by the group Cap Montana Property Taxes. The initiative would put tax valuations back to 2019 levels, cap rates on residences at 1% and limit increases in assessed valuations to either 2% or the inflation rate, whichever is lower.

The group touted the measure as limiting the rate of growth in property taxes to "keep Montanans from being taxed out of their homes."

HB 651 brought by Rep. Marta Bertoglio, R-Clancy, inserts the Legislature into the initiative process and expands the role of the attorney general. The law restricts the secretary of state from approving a ballot initiative for signature gathering until a legislative interim committee weighs in via a vote, which must appear on the signature-gathering petition. The law further requires the attorney general to analyze and include a warning should the initiative have a negative effect on business.

The lawsuit notes that neither the legislative vote nor business impact analysis took place with CI 121. Including that information would help voters make an informed decision when deciding whether to sign, the lawsuit states.

“CI-121 is a very complex and far-reaching initiative with unforeseen consequences for all Montanans,” MFPE President Amanda Curtis said in a statement. “In fact, they tried this stunt in California and, as expected, it has been a spectacular failure. The Attorney General and Secretary of State have a legal duty to review and inform the public of the risks involved and to protect Montana businesses, but they failed to do so and that’s why we are being forced to file this suit. Not a single Montanan should sign any petition until they have all the facts.”

Those opposed to property tax caps generally argue they do result in a loss of funding.

Spokespeople for Jacobsen and Knudsen said Thursday that HB 651 applies only to statutory initiatives and did not change Montana’s code concerning constitutional initiatives.

“Our shared understanding with Legislative Services Division is that there is no requirement for interim committee review for Constitutional Initiatives,” Jacobsen spokesperson Richie Melby said in an email. 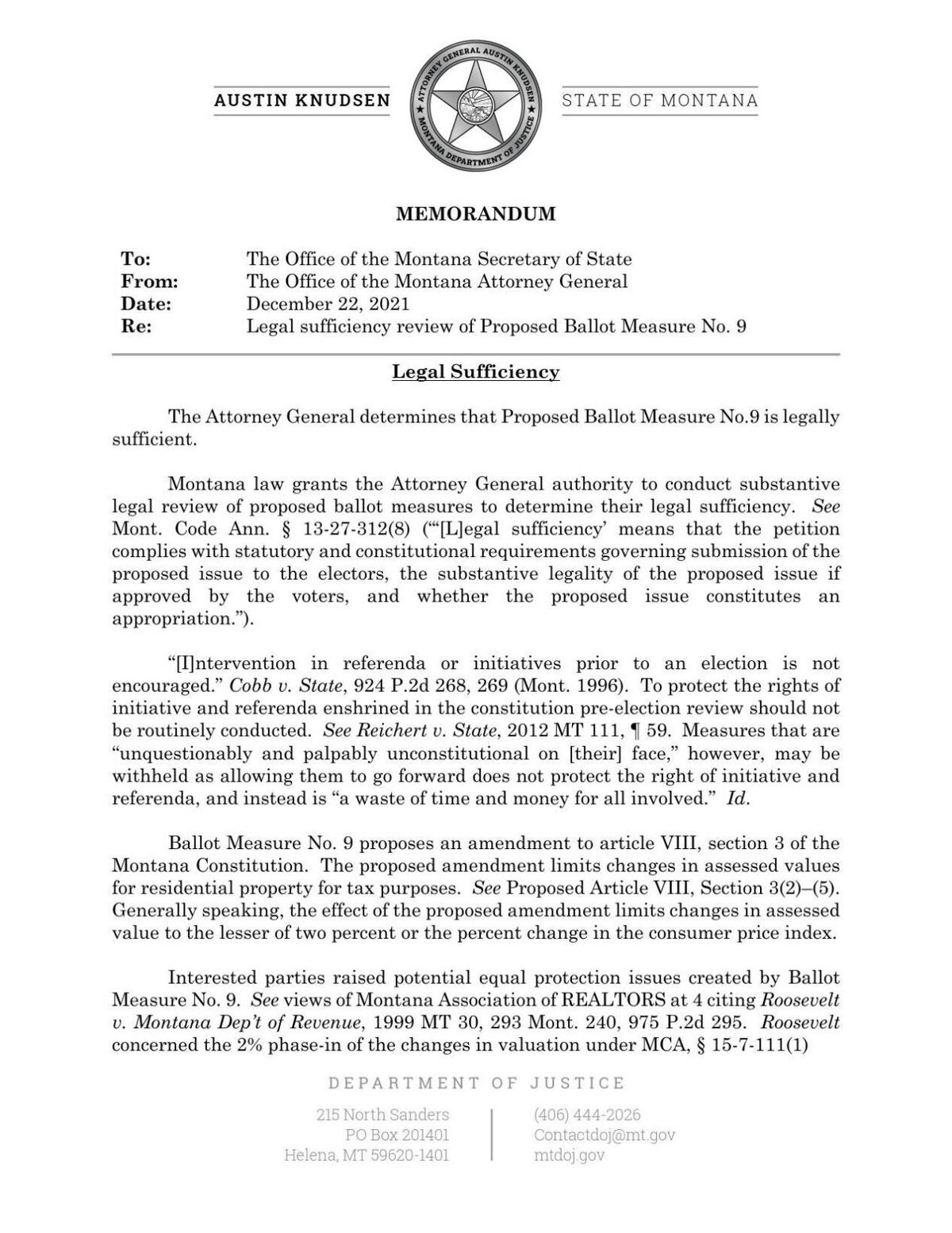 “The Attorney General’s Office fulfilled its legal obligation to review the measure,” he said in an email. “Attorney General Knudsen is committed to the rule of law and is not going to exceed the authority that the legislature delegated. As stated in the legal sufficiency review, the law gives the attorney general the power to make a ‘significant material harm’ finding for statutory initiatives but does not do so for constitutional initiatives.”

The lawsuit alleges that the legal conclusion limiting the scope of HB 651 to statutory initiatives is incorrect, citing the definition of “ballot issue” found in Montana law to include both statutory and constitutional initiatives.

Those bringing the lawsuit are asking the judge to find that HB 651 applies to constitutional initiatives and to halt signature gathering until the secretary of state and attorney general to complete the provisions of the law.

In 2021, the state Legislature dramatically increased the amount a person or business could claim in a tax credit, from $150 to $200,000.