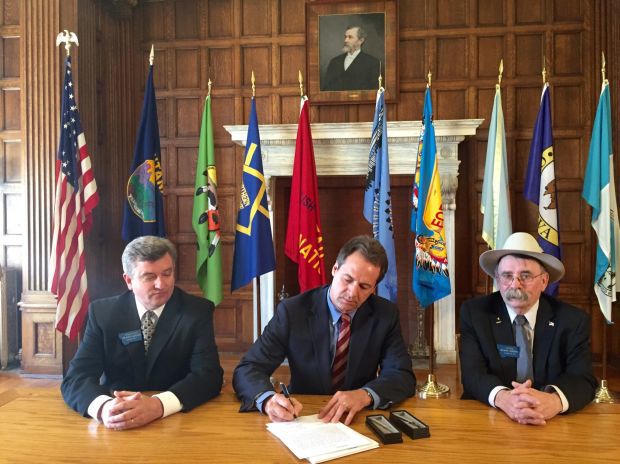 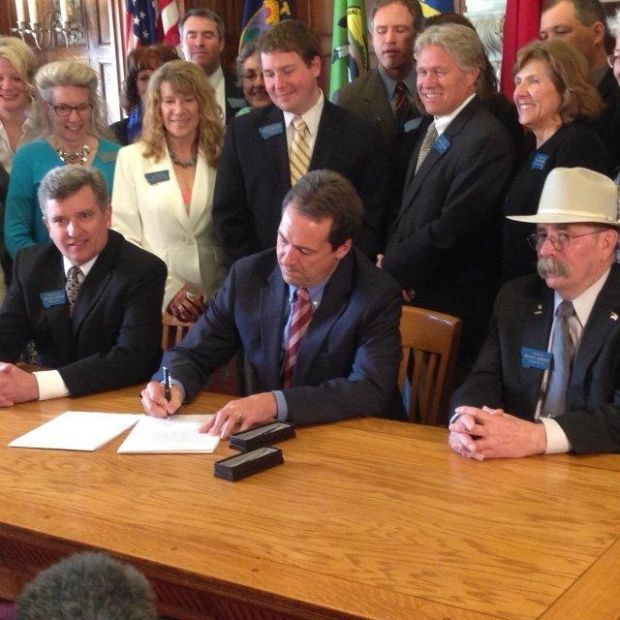 Gov. Steve Bullock signs into law Senate Bill 289, to tighten Montana's campaign finance laws. On right is the bill's sponsor, Sen. Duane Ankney, R-Colstrip. On left is Rep. Frank Garner, R-Kalispell, who led debate on bill in House. Supporters of the bill and others who worked on it stand behind them.

The Democratic governor signed the bill flanked by two Republicans, Sen. Duane Ankney of Colstrip, who sponsored the bill, and Rep. Frank Garner of Kalispell, who led the debate in the House. Later, a number of legislators who supported the bill and others who worked on it stood behind the governor and two lawmakers for another bill signing.

“When it comes to Montanans as individuals having control of our elections, this is the most significant day in the last 112 years since Montanans passed the Corrupt Practices Act,” Bullock told a large crowd in the Governor’s Reception Room.

That initiative, passed by voters in 1912, helped wrest the state’s political power from the Copper Kings, the mining barons who had exerted enormous influence over state politics, Bullock said. That initiative prohibited corporations from making independent expenditures in state political campaigns.

“For a century following, our elections — and the candidates who prevailed in those contests — were responsive not to some anonymous corporation and their millions, but rather to their neighbors who elected them,” Bullock said. “Our campaigns were something we could be proud of, and our democracy worked. That is, until recent anti-democratic decisions by the U.S. Supreme Court allowed unlimited secret money to flood into our elections.”

A group known as Western Tradition Partnership sued to have the Corrupt Practices Act found unconstitutional. Bullock as attorney general represented the state, which won at the Montana Supreme Court in 2011. The next year, however, the U.S. Supreme Court summarily reversed the Montana court to strike down the law.

Bullock said he, Ankney and Garner all have been targeted by the lies spread by dark-money groups.

With the passage of SB289, Bullock said Montana now has a law “that mandates that every penny spent in our elections will be disclosed.”

“Montana is now back to having legitimate elections instead of the auctions we — for a brief time — held every two years,” he said. “And we are on our way back to having elected officials that are finally accountable to the citizens they represent instead of some special interest and their bundles of dark money.

“Beginning in the next election for state races, Montanans will be able to accurately judge and understand the political attacks that have become so common in our elections, and they’ll have the opportunity to see who is funding the attacks.”

Ankney said he was proud that the bill passed after the Senate “squashed” a similar bill in 2013.

He recounted talking to one legislator this year who wasn’t sure he was going to support SB289.

“I said, ‘Okay, think of it this way,’” Ankney said. “ ‘You want a flier against you that says he voted for dark money or do you want to send a flier saying I voted to send them damn carpetbaggers out of this state?’ ”

The crowd cheered loudly at that line.

“Why in the world would not like to have fair elections?” Ankney asked, “Why would you not want to run your campaign in a manner that represents your constituents and not individual groups?”

Garner, a former Kalispell police chief, said, “You really don’t know you need a raincoat until it’s raining. That’s kind of what happened to me this session. As a freshman, this was not something that was on my radar screen.”

He was targeted earlier this session by Americans for Prosperity-Montana, part of a conservative political group founded by billionaires David and Charles Koch of Wichita, Kan. That came after Garner refused to sign a card from the group pledging to oppose Medicaid expansion.

As a result, the group, without notifying him, sent critical postcards to notify its supporters of a town meeting in Kalispell. Garner and his supporters showed up uninvited to the meeting, which local press accounts said did not go well for AFP-M.

On the drive back to Helena that night, Garner said he decide to support the bill to fight dark money.

“I think if we do nothing else when we leave here, if we’ve made sure that elections are more open and fair, I think we’ve done our job,” Garner said.”

The new law would:

After the bill signing, the Montana Republican Party issued a press statement saying that even with passage of the new law, Bullock, as chair of the Democratic Governors Association, still will be able to raise and spend undisclosed, unlimited corporate cash.

“Bullock only believes in transparency as long as he doesn’t have to tell Montanans where all his undisclosed, unlimited corporate cash is coming from,” the Republican Party said.

In response, Bullock’s spokesman David Parker said, "When it comes to stamping out corruption and restoring integrity to our elections, you're either with Gov. Bullock, Sen. Ankney and Rep. Garner, or you're with the billionaires who funded the opposition to this measure and think our democracy is for sale. It's clear which side the Montana GOP picked.”

Montana’s new campaign reform rules were added to the books Tuesday, despite objections from state lawmakers who say the rules go too far.

Gov. Steve Bullock signs into law Senate Bill 289, to tighten Montana's campaign finance laws. On right is the bill's sponsor, Sen. Duane Ankney, R-Colstrip. On left is Rep. Frank Garner, R-Kalispell, who led debate on bill in House. Supporters of the bill and others who worked on it stand behind them. 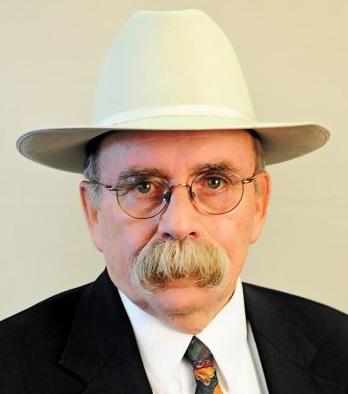