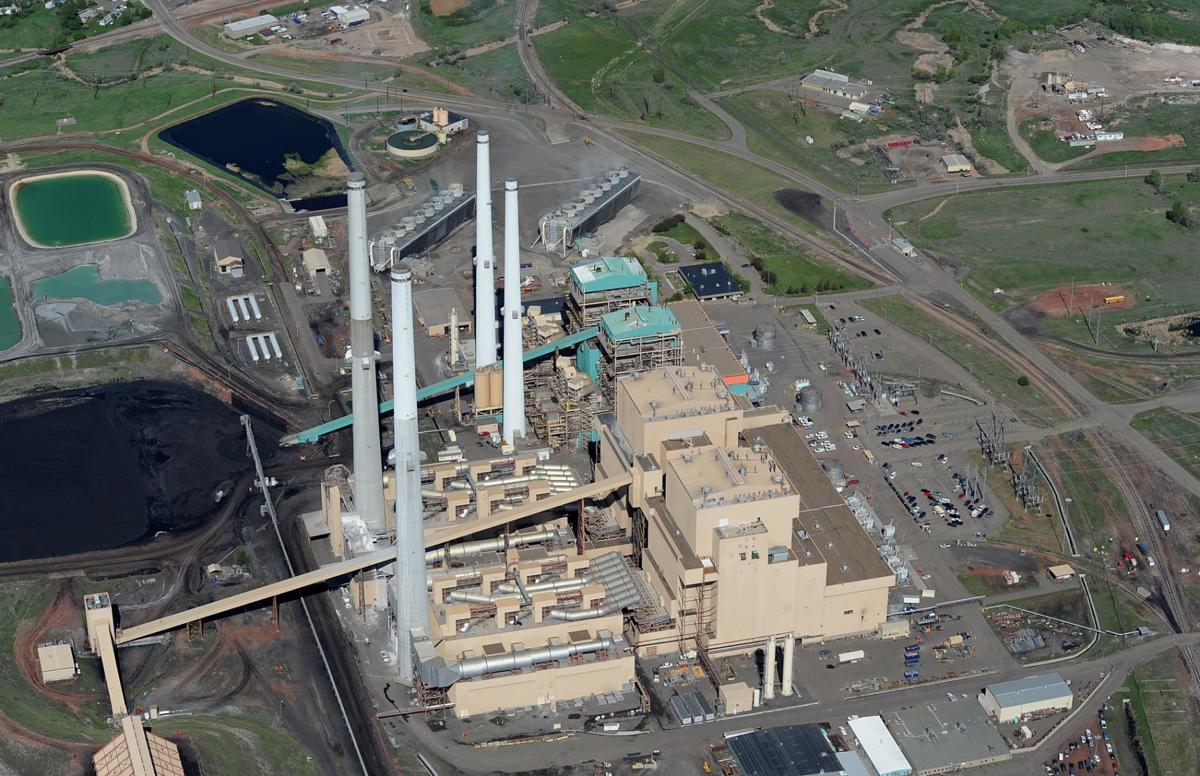 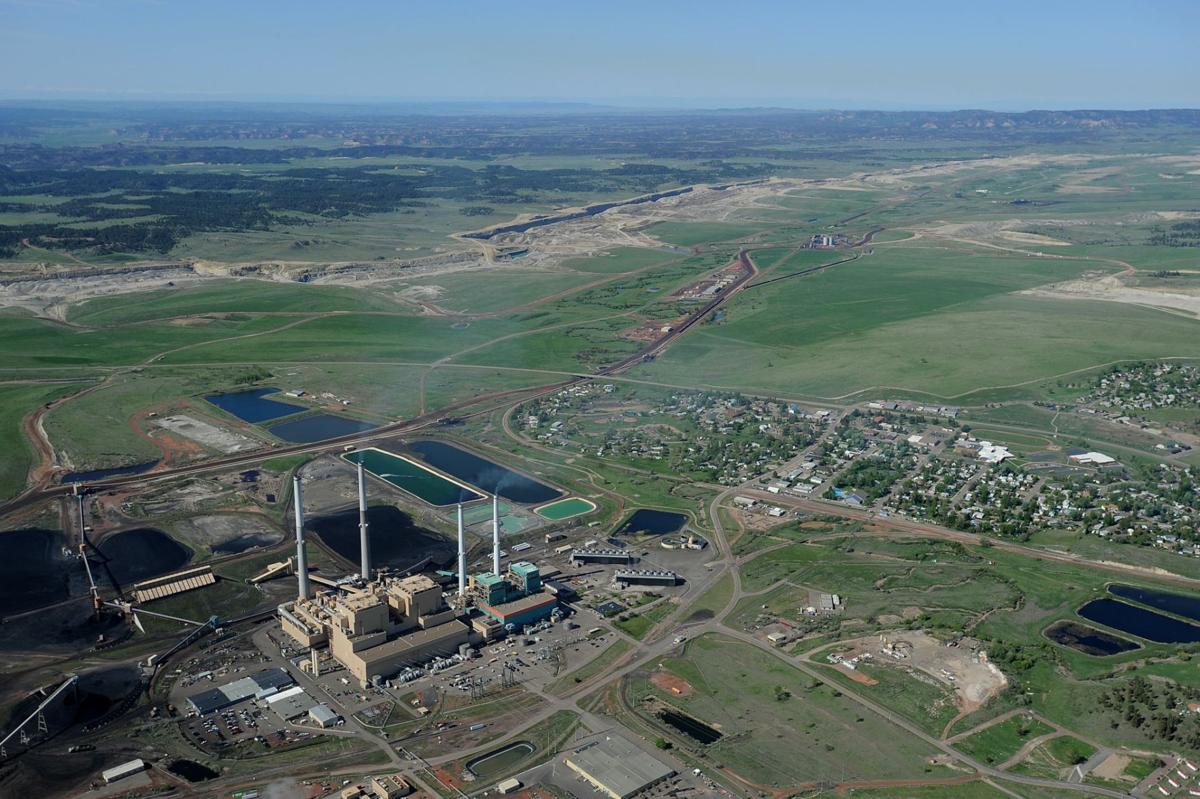 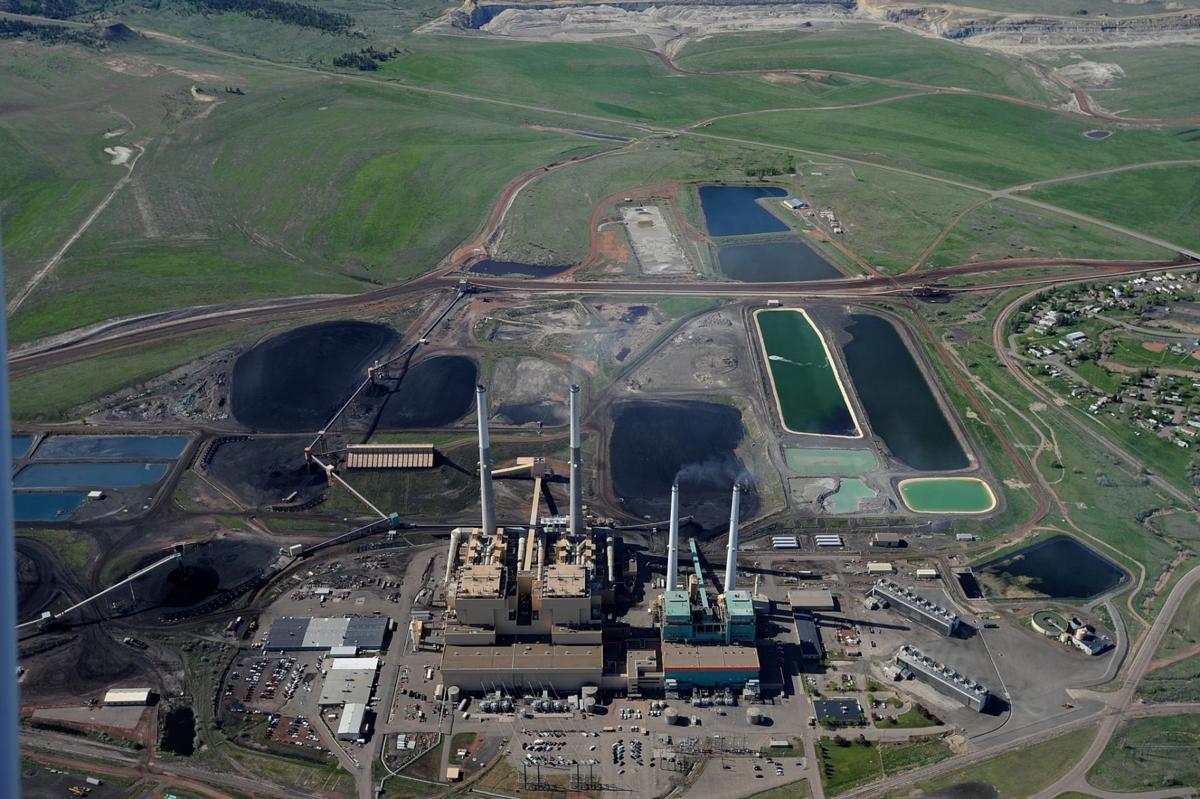 An aerial view shows Colstrip power plants 1,2,3 & 4 and the Westmoreland coal mines near Colstrip. Montana has some of the largest coal reserves in the country, but a continued push from Washington on carbon regulations places the industry's future in doubt. 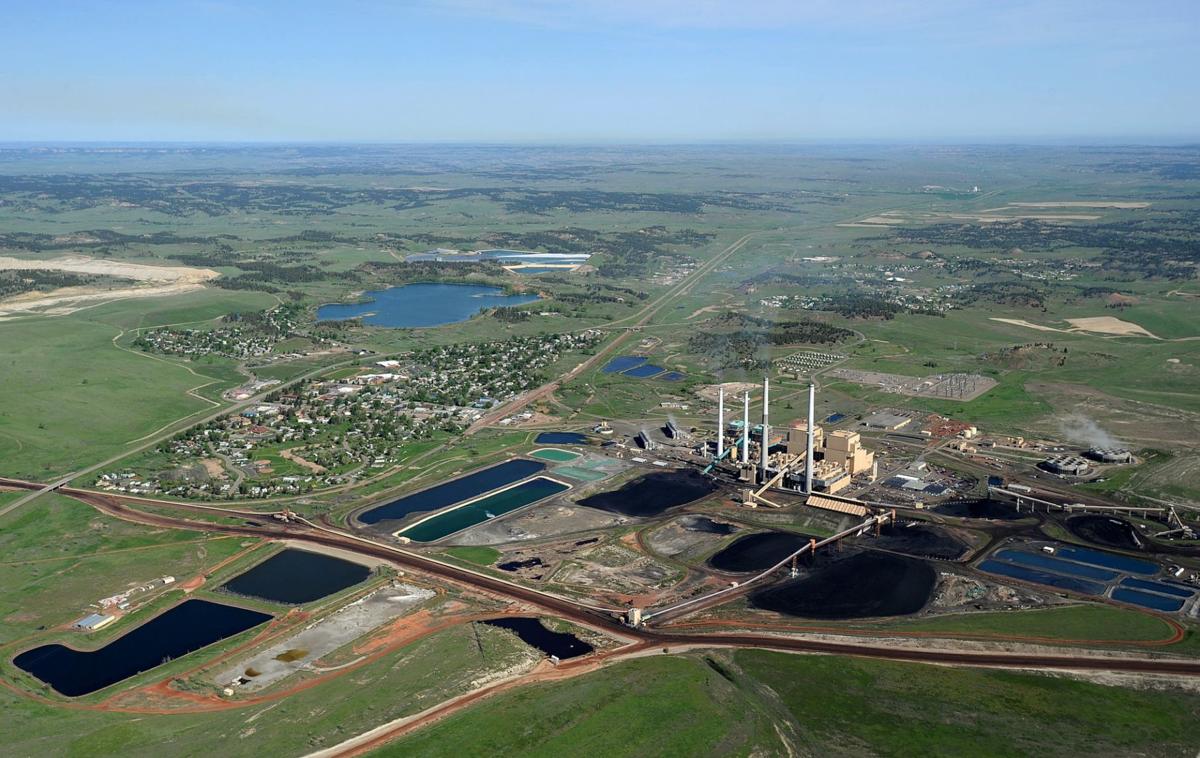 The accelerated schedule is spelled out in Puget Sound Energy's legal settlement filed Friday with the Washington Utility and Transportation Commission. The date speaks specifically to the four-unit power plant’s two youngest generators, Units 3 and 4. Colstrip’s two older units are already slated for closure by 2022, five years from now.

The 2027 depreciation date aligns Puget Sound with plans by Colstrip’s other utility owners in Oregon and Washington who are circling 2030 as the end of Colstrip’s “useful life.” Puget is agreeing to begin billing customers now for the closure of Units 3 and 4, with funds ready to go by 2027.

“Depreciation life should be relatively equivalent to a plant’s useful life and we feel like with 3 and 4 we’re in the ballpark,” said Ken Johnson, Puget’s director of regulatory affairs.

Natural gas and renewable energy are expected to fill the void as Puget Sound Energy transitions from coal.

The settlement requires approval by the Utility and Transportation Commission to be final. It also includes money to help the Colstrip community transition away from a coal-energy economy.

Other settlement provisions are meant to keep a close eye on Colstrip, including annual retirement dates for Colstrip Units 3 and 4 and an annual accounting for decommissioning and remediation costs. Regular reports on how money is being spent to shut down and clean up Colstrip Units 1 and 2 are also required.

Five years ago, Colstrip’s utility owners were in agreement that Units 3 and 4 would burn into the 2040s. But environmentally-conscious consumers in Oregon and Washington began demanding changes. Oregon lawmakers in 2016 passed a law requiring PacifiCorp to stop supplying coal power to the state by 2030. The law required the same of Portland General Electric by 2035.

PGE has since estimated Colstrip’s useful life to end by 2030. PacifiCorp is required to do the same. Avista Corp., a Spokane, Washington, utility, now puts the life expectancy of Units 3 and 4 at 2037.

This year, communities in Puget Sound Energy’s service area have been demanding that the utility get out of Colstrip. In Seattle-anchored King County mayors of 14 cities have signed a “strategic climate action plan” to phase out coal-power by 2025.

“This is what Washington customers have said they want. It’s inevitable,” said Doug Howell, of the Sierra Club’s Beyond Coal Campaign.

The outlier among Colstrip owners is NorthWestern Energy, which serves half of Montana. NorthWestern estimates the lives of Units 3 and 4 to end in 2046.

Talen Energy, the sixth Colstrip owner, has not publicly identified an end date for Units 3 and 4, but has agreed with Puget Sound Energy to close Units 1 and 2 by 2022. Those utilities split ownership of Units 1 and 2 equally.

Talen and Puget agreed in 2016 to close Units 1 and 2 to settle a lawsuit brought by the Sierra Club and the Montana Environmental Information Center.

There is money in the Puget Sound Energy settlement to help the community of Colstrip and Rosebud County transition away from a coal economy. Puget agreed to put up $10 million to help the communities economically tied to the power plant. How the money is spent will be up to a yet-to-be-assembled committee of representatives from the local community, the state of Montana and Puget Sound Energy.

The transition plan resembles one recommended by the Natural Resources Defense Council, which partnered with Renewable Northwest and the NW Energy Coalition to make suggestions for Puget’s future plans for Colstrip. As interveners in the rate case, NRDC made the point that Rosebud County, where Colstrip is located, is the fifth most dependent county in the nation on federal coal for employment, with 13.6 percent of its jobs in mining or power generation.

Montana Attorney General Tim Fox indicated in a press release Friday that he had mentioned the transition terms in recent talks with Puget Sound Energy.

In the end, Puget based its transition support for the Colstrip community on a similar package offered to Lewis County, Washington, to deal with the shutdown of TransAlta’s coal-fired power plant in Centralia. That plant will retire in 2020. Power plant owners are spending $55 million on the transition.

The $10 million in transition funding for Colstrip is less than the TransAlta funding, but Rosebud County and Colstrip are much smaller communities, Johnson said. Per person, the money offered for transition is more than what was offered by TransAlta.

The amount is less than the compensation Ankney and others attempted to require from Puget Sound Energy by passing a industrial shutdown law during the 2017 Legislature.

"As far as the $10 million, I was aware that was the figure. We here in Rosebud County will have to figure out how that money is going to be used."

Ankey didn't expect the $10 million to be the end of the transition funding for the Colstrip community. He's been in early talks with Talen Energy about its role in the closure of Units 1 and 2, though there's been no talk of transition funding.

It's also possible the 2019 Legislature will take up mandatory compensation from industrial businesses exiting the state. Ankney said he will read the settlement before deciding what to do next.

Right now, there's a lot of heartburn over the new 2027 depreciation schedule for Units 3 and 4, Ankney said. He had hoped those units would have been left out of Colstrip's rate case.

It’s Puget’s hope that utility owners of Colstrip power plant will also put money on the table to help the community transition. The decision to contribute is one each utility will make on its own and that autonomy will be in play in other matters moving forward for Units 3 and 4.

There were 10 parties involved in Puget’s settlement talks, including the Montana Department of Justice, represented by former Washington attorney general Robert McKenna. Montana signed off on the settlement, though Attorney General Tim Fox has said earlier that Units 3 and 4 should have been left off the table in Puget’s rate case.

The attorney general’s office later filed testimony in August, in which it made several points that were ruled irrelevant and submitted too late to be added to the evidence used to decide the case.

Fox said in press release Friday that the settlement was a good start.

“In representing the state’s interests in this rate case, my office has made clear through negotiations with PSE our expectation that the utility fulfill its responsibilities to the state of Montana," Fox said. "This settlement is a good start, and we urge the Washington UTC to approve it as agreed upon by the parties.”

Shortly after the settlement was filed, Fox wrote the Washington Utility and Transportation Commission emphasizing his support of the deal.

"PSE's contribution should encourage other Colstrip owners to contribute similar amounts - or more - to help fund community transition in southeastern Montana," Fox wrote. "This good faith effort recognizes that the public interest here involves the intertwined concerns of Washington ratepayers and Montana residents who benefit from affordable, reliable Colstrip power and livable Colstrip wages, respectively; PSE's contribution should also, as noted above, spur a shared effort among all stakeholders for Colstrip community transition."

The attorney general wrapped up his letter stating that Colstrip workers should be used in the shutdown and cleanup of Units 1 and 2.

Puget Sound also agreed to begin talks with Colstrip's other utility owners about keeping power on Colstrip's transmission lines as coal-power draws down. Those talks will begin before Washington's utility commission with PacifiCorp and Avista Corp. participating. All three are regulated by the WUTC.

"The transmission aspects of the proposed agreement would help to secure Montana's role in the region's renewable energy future," said Jeff Fox, Montana Policy Manager for Renewable Northwest. "If approved, the settlement will focus attention and efforts on retooling Montana's transmission system to export new clean energy resources to the Northwest, paving the way for continued energy investments in Montana."

Renewable Northwest was a party involved in the settlement.

“This is a major milestone, because far too often in Montana out-of-state companies have shut their doors with little notice and left communities with contamination and nothing economically," said Anne Hedges, MEIC deputy director. "The huge shifts in energy markets have made planning difficult, but now that there is a realistic end date for the life of the Colstrip plant, it provides Montana the time and money to prepare for the transition.”

OLYMPIA, Wash. — A company that wants to build and operate a large terminal to export coal from the western U.S. to Asia was denied a key perm…

$10M to help with Colstrip power plant shutdown is too much, Washington State council says

For Montana, the Obama-era Clean Power Plan was all smoke and no fire by the time the Trump administration announced Monday that it would kill…

The owner of a coal-fired power plant in Hardin has lost money from the site since 2014 and plans to leave town.

Last week The Billings Gazette published a troubling headline: “Colstrip moves to cut ties with Rosebud Mine as Westmoreland falters.” In this…

An aerial view shows Colstrip power plants 1,2,3 & 4 and the Westmoreland coal mines near Colstrip. Montana has some of the largest coal reserves in the country, but a continued push from Washington on carbon regulations places the industry's future in doubt.