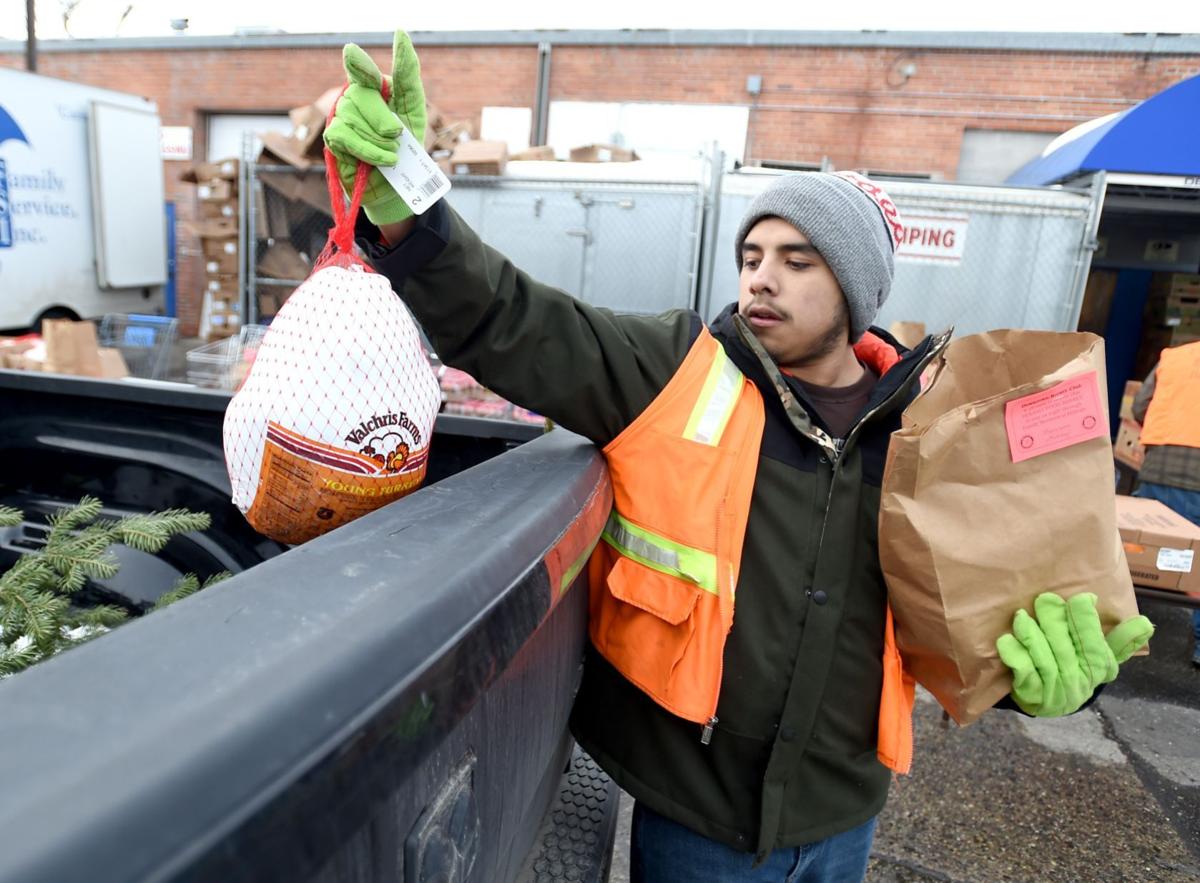 Parker Jackson loads a turkey and a bag of groceries into the bed of a truck at Family Service Inc. on Monday. Families drove up all afternoon to receive a full holiday meal. More Montanans are working now than were during the recession, but the number of people receiving Supplemental Nutrition Assistance Program benefits hasn’t followed unemployment’s downward path. 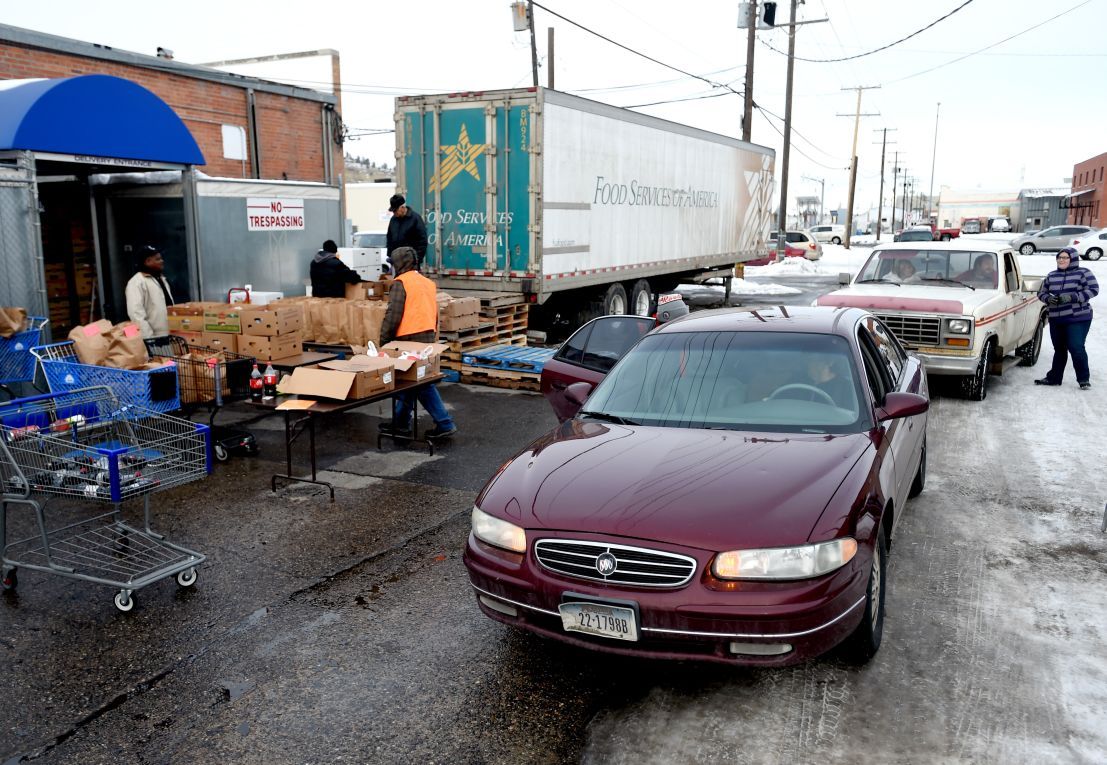 Families drove up to Family Service Inc. on Monday to receive a full holiday meal. More Montanans are working now than were during the recession, but the number of people receiving Supplemental Nutrition Assistance Program benefits hasn’t followed unemployment’s downward path. 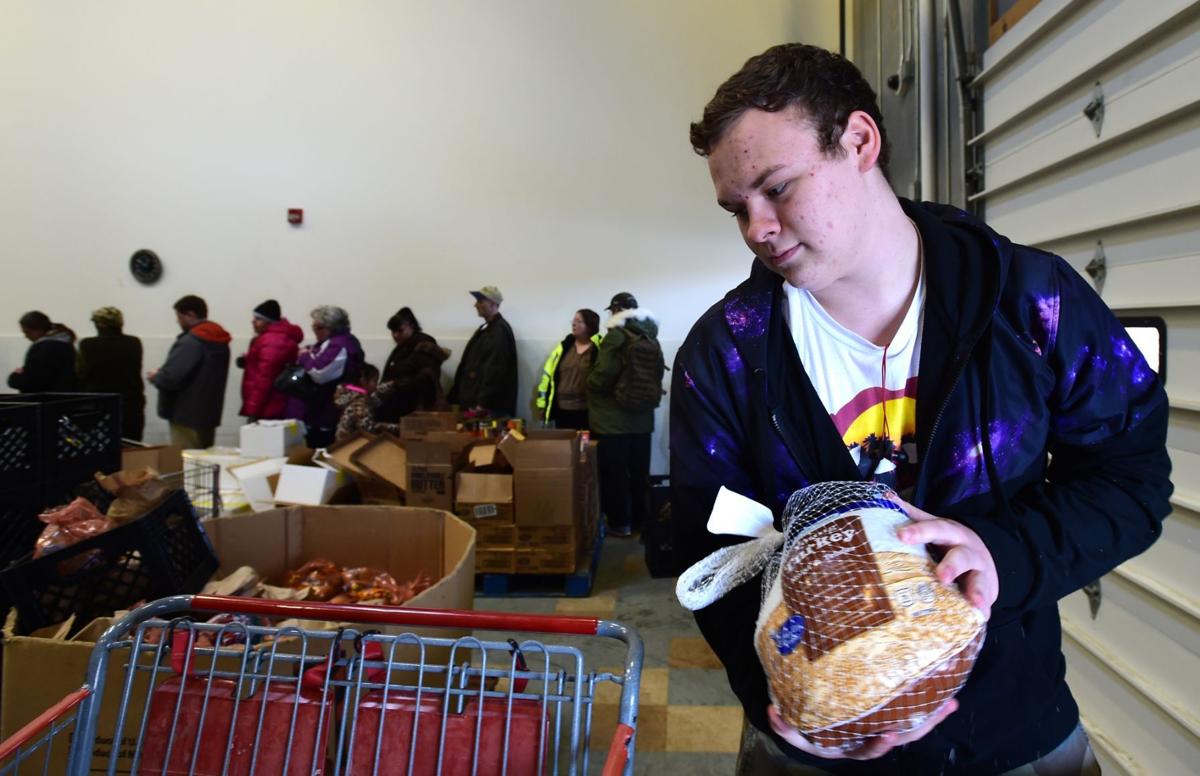 Blake Kierstead was among Career Center students loading holiday food boxes at the Billings Food Bank on Tuesday. The Food Bank gave out a record 1,800 boxes of food. 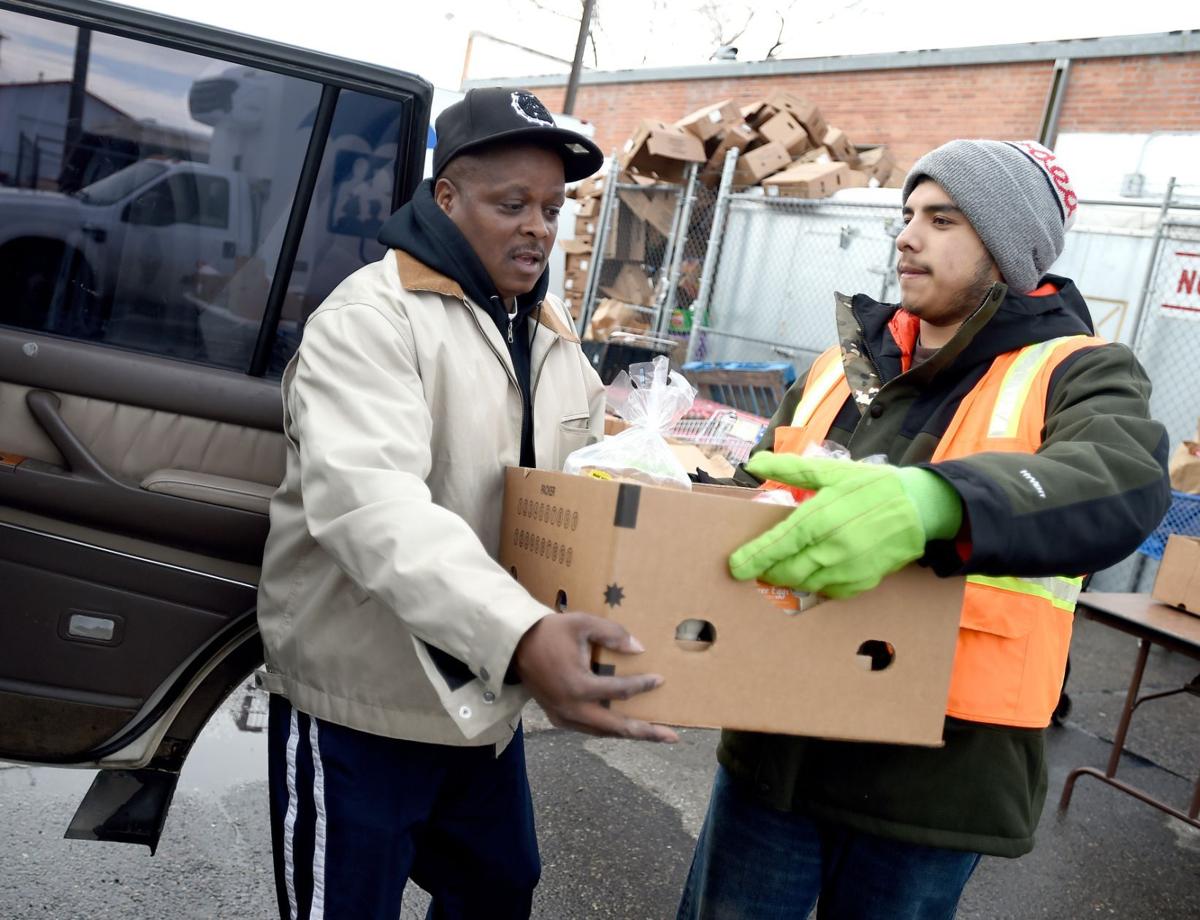 Volunteers Eric Dennis, left, and Parker Jackson load a box of food into a vehicle at Family Service Inc. in this December 2015 file photograph.

The aging Chrysler Pacifica rolled to a stop behind Family Service Inc. and let out a mechanical rattle loud enough to shake something loose.

It was a cold, gray December day. Amanda Stevenson, a single mother of five, cracked her driver’s side window and passed a blue food voucher to a woman holding a clipboard and standing at a card table. Criteria were reviewed, boxes checked. The woman handed the clipboard to Stevenson, who penned her name on the 511th line of a list of low-income families receiving a modest Christmas dinner in a box.

It was a special occasion for a not-so-special trip. Christmas or not, Stevenson and thousands of other Montanans who work full-time but still struggle to make ends meet, arrive at charitable food pantries like this one when the monthly support they receive from the Supplemental Nutrition Assistance Program runs out.

“It lasts a few weeks. We get very little,” Stevenson confided. “I get a meal at my job, and my kids eat at a school. We make it work.”

More Montanans are working now than were working during the recession. January is the worst month for unemployment of every year, and next month’s jobless number will likely be 25,000 or less, based on the average increase in jobless numbers from November to January over the past several years. At the worst point of the recession, in January 2011, 42,397 Montanans were on unemployment. The decline in the number of people filing for unemployment had been roughly 30 percent.

For example, last October, the most recent month for state SNAP data, 113,462 people were receiving public assistance to buy groceries. The number of people turning to SNAP in October during the recession rose to 125,413 in 2011. The decline in the number of people eligible for SNAP has been roughly 10 percent.

There’s a reason the number of Montanans eligible for nutrition assistance has never returned to pre-recession levels.

It has a lot to do with low-income workers’ ability to apply for SNAP.

In the last months before Montana’s housing construction industry softened and the national mortgage crisis came into view, which was 2008, the number of Montanans on SNAP, formerly known as food stamps, was 80,946. Five years later, people eligible for food assistance numbered 130,952, an increase of 50,000.

Economic hardship contributed to the increased demand for SNAP, but there were other factors, said Jamie Palagi, who manages the Montana SNAP program as Human and Community Services Division administrator for the Department of Public Health and Human Services. Namely, the hours during the day in which people could apply for SNAP tripled from eight business hours to a 24-hour online application.

“It is working,” Palagi said. “We’ve had really significant adoption of our online application.”

There have been other changes, as well. People who qualify for other social welfare programs like Medicaid, find out more quickly if they are SNAP eligible, too. But the expanded hours to apply for SNAP were a game-changer, according to people who work with the poor.

“The reason enrollment went up after they went 24 hours is that all those people who work in the service industry, all those who don’t make enough to pay the rent and maybe purchase food for their families, now have the opportunity to enroll,” said Stacy Brown, Family Service Inc. executive director.

Applying for SNAP at the window of a government office is first-come, first-served. For a working person, unpredictably of the process in the middle of the workday made applying difficult. Sometimes applicants had to decide whether to go to work or apply for nutrition assistance.

Stevenson said she knows a mother who lost SNAP benefits after program paperwork was sent to the wrong address. Stevenson’s friend, also a single mother, couldn’t afford to give up work time to straighten out her SNAP problems. Consequently, her family went without the grocery help SNAP offers.

The Center on Budget and Policy Priorities reports that more than 46 percent of the Montana families relying on SNAP include people who work. Able-bodied family members ages 16 to 59 must register to work unless they’re in school.

Roughly 72 percent of Montanans enrolled in SNAP are in families with children. And children account for 50,000 of the Montanans in the program. More than a quarter of the families also have a member who is elderly or disabled.

“The minimum wage went to $8.05 in January 2015, but the living wage for one parent with one child would be $17.35, according to the MIT Living Wage Calculator,” Mermel said. “We don’t have enough good-paying jobs. A lot of our growth has been in low-paying jobs.”

State employment surveys indicate people in part-time jobs would also work more if they could get the hours. Among Montanans age 16 to 64, nearly 22 percent work less than 35 hours a week. That’s the sixth-highest percentage of part-time workers in the nation, according to the U.S. Bureau of Labor and Statistics.

Among Montana part-time workers, 36 percent would like full-time work, according the state Department of Labor.

Mermel sees two sides of the living wage argument, both as a coordinator of a program to feed hungry children and also as a restaurant owner. She and her husband own Qdoba in Billings, where they pay a better-than-average wage but realize there’s only so much they can do without raising the price of their food beyond what customers will pay.

The backpack meals program was created to meet a need for more food among low-income Billings students. Teachers reported children distracted by headaches and empty stomachs, Mermel said. At the time, the kids wanted to attend school on weekends, just for the hot lunch. The program sends low-income students home with food to see them through weekends and holidays. Earlier this week, the program prepared 1,800 meals to see students through the long Christmas break.

The backpacks have enough fruit, milk, cereal and snacks for a single child, but not enough for parents. By packing the food away in backpacks, the program keeps donations discreet.

“Teachers tell me the children go over and pat their backpacks. Kids like to feel that it’s in there and then they go and sit down and participate in class,” Mermel said.

Last week, the United States Conference of Mayors cited low wages, followed by poverty as the leading causes for hunger in U.S. cities. Folded into the problem were high housing costs and SNAP benefits that lasted only a few weeks each month.

The survey spoke to what Brown said she sees daily at Family Service Inc.: families short on cash and long on problems making tough decisions about paying the rent, or buying groceries, repairing a car or paying for childcare.

The mechanical rattle in Stevenson’s car was going to have to wait, the mother said. There were simply too many other bills needing to be paid. And it was Christmas.

She smiled, put the car in drive and drove down the alley with her care package.

This incredibly small reptile species was just discovered in Madagascar

Montana's unemployment rate at 4% in December

^pA new $63,900 refrigerated truck donated by the Wal-Mart Foundation will help Family Service Inc. add to the number of families it helps fee…

House Republicans were all set to pass the 2018 farm bill last week, but then conservative voters joined with Democrats to kill the legislatio…

Parker Jackson loads a turkey and a bag of groceries into the bed of a truck at Family Service Inc. on Monday. Families drove up all afternoon to receive a full holiday meal. More Montanans are working now than were during the recession, but the number of people receiving Supplemental Nutrition Assistance Program benefits hasn’t followed unemployment’s downward path.

Families drove up to Family Service Inc. on Monday to receive a full holiday meal. More Montanans are working now than were during the recession, but the number of people receiving Supplemental Nutrition Assistance Program benefits hasn’t followed unemployment’s downward path.

Blake Kierstead was among Career Center students loading holiday food boxes at the Billings Food Bank on Tuesday. The Food Bank gave out a record 1,800 boxes of food.

Volunteers Eric Dennis, left, and Parker Jackson load a box of food into a vehicle at Family Service Inc. in this December 2015 file photograph.