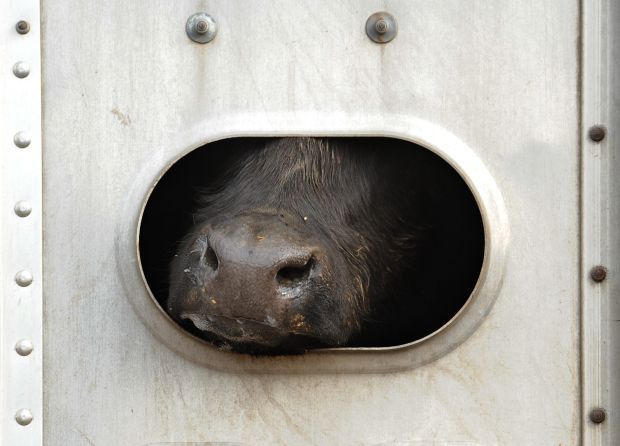 A calf sticks its nose from the truck as Lavina rancher Craig Jensen shipped steer calves from his ranch in November. 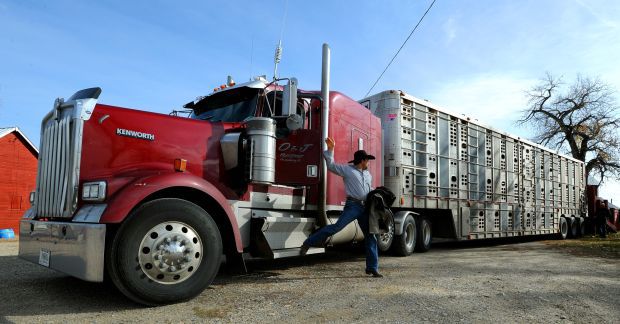 Livestock trucker Sy Roark, of Phillipsburg, jumps down from his truck to load 200 steer calves as Craig Jensen, his hired help, family and friends round up and ship from the ranch near Lavina.

With cows in the trailer and his semitruck headed north last week, Nick Jerke was making good time as he passed Melville.

The road was dry and for first time this month the Park County trucker wasn’t worried about new federal regulations, slated for mid-December, shortening his driving hours.

The Federal Motor Carrier Safety Administration recently tapped the brakes on new rules requiring all truck drivers to use electronic logging devices to make sure they're pulling off the road after 11 hours and not return to driving for at least 10 more.

The administration announced a three-month deferment for truckers hauling livestock. Other haulers will have to comply starting Dec. 18.

“They did give us a 90-day waiver yesterday for livestock. That’s good,” Jerke said. “What’s going to happen 90 days later, we don’t know.”

After years of talking about getting sleepy truckers off the road, the Federal Motor Carrier Safety Administration is closing in on requiring all commercial drivers to have electronic logging devices capable of showing when truckers hit 11 driving hours per day. The objective is to get drivers off the road to rest for 10 hours before they start driving again.

The rule change has been criticized by the trucking industry in general, but particularly by drivers hauling livestock. Jerke and others say it’s inhumane to leave animals in a parked trailer for 10 hours so a trucker can rest up. The truckers would rather continue driving until the animals can be unloaded at a final destination.

A driver hauling cattle has to get off the road without delay, Jerke said. Cattle experience shrinkage when they travel. They lose weight from stress and lack of water. An animal can withstand those conditions for little more than half a day, but after that the trip wears on the animal’s immune system.

A trip with a 10-hour break can turn 14 hours in a trailer into 24, once the mandatory break is combined with the remaining road hours driven the following day.

Fall is the busiest time for livestock haulers in Montana. A half million calves head to market, mostly between September and December. The interstate is heavy with cattle trucks in communities with auction yards like Billings and Miles City.

Some calves are bound for out-of-state feedlots, and Nebraska is a common destination. The trip can take up to 16 hours for some Montana loads.

The administration on Tuesday described the 90-day extension as a transition period. It did not indicate a permanent exception to the electronic logging device, or ELD, was in the works for livestock haulers.

“FMCSA has listened to important feedback from many stakeholder groups, including agriculture, and will continue to take steps to ease the transition to the full implementation of the ELD rule,” said Cathy Gautreaux, FMSCA deputy administrator, in her recent announcement.

Last week, the Montana Farm Bureau threw its support behind an exception for livestock haulers. The group wrote its opposition to the current rule into its platform for the year. The member organization called the pending rule impractical. Drivers like Jerke would be forced to unload livestock during a mandatory 10-hour break. The downtime would be anything but restful.

MISSOULA — Bobby Hauck unleashed the charm before his introductory press conference even began on Friday morning.

Photos: Hunting trophies from the 2017 season

Montanans love to hunt, and many harvested trophies this season. Readers submitted their photos showcasing their hunting successes of 2017.

We've called for the truth.

Here is a look at some of the crime stories from The Billings Gazette from November.

A different kind of rock artist lives in Josephine Crossing.

ST. ANTHONY, N.D. — Kelly Schaff had high expectations for SAV America 8018. But he had no idea the bull would end up being the record highest…

A calf sticks its nose from the truck as Lavina rancher Craig Jensen shipped steer calves from his ranch in November.

Livestock trucker Sy Roark, of Phillipsburg, jumps down from his truck to load 200 steer calves as Craig Jensen, his hired help, family and friends round up and ship from the ranch near Lavina.