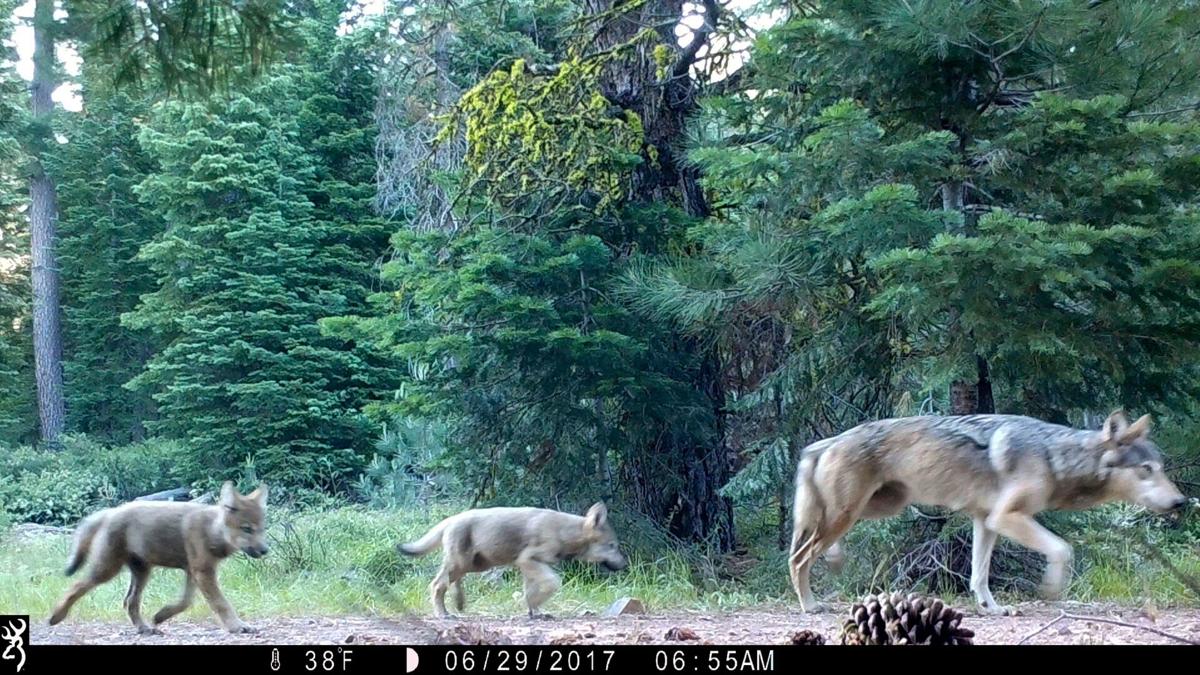 FILE - This June 29, 2017, file remote camera image provided by the U.S. Forest Service shows a female gray wolf and two of the three pups born in 2017 in the wilds of Lassen National Forest in Northern California. Trump administration officials on Thursday, Oct. 29, 2020, stripped Endangered Species Act protections for gray wolves in most of the U.S., ending longstanding federal safeguards and putting states in charge of overseeing the predators. (U.S. Forest Service via AP, File) 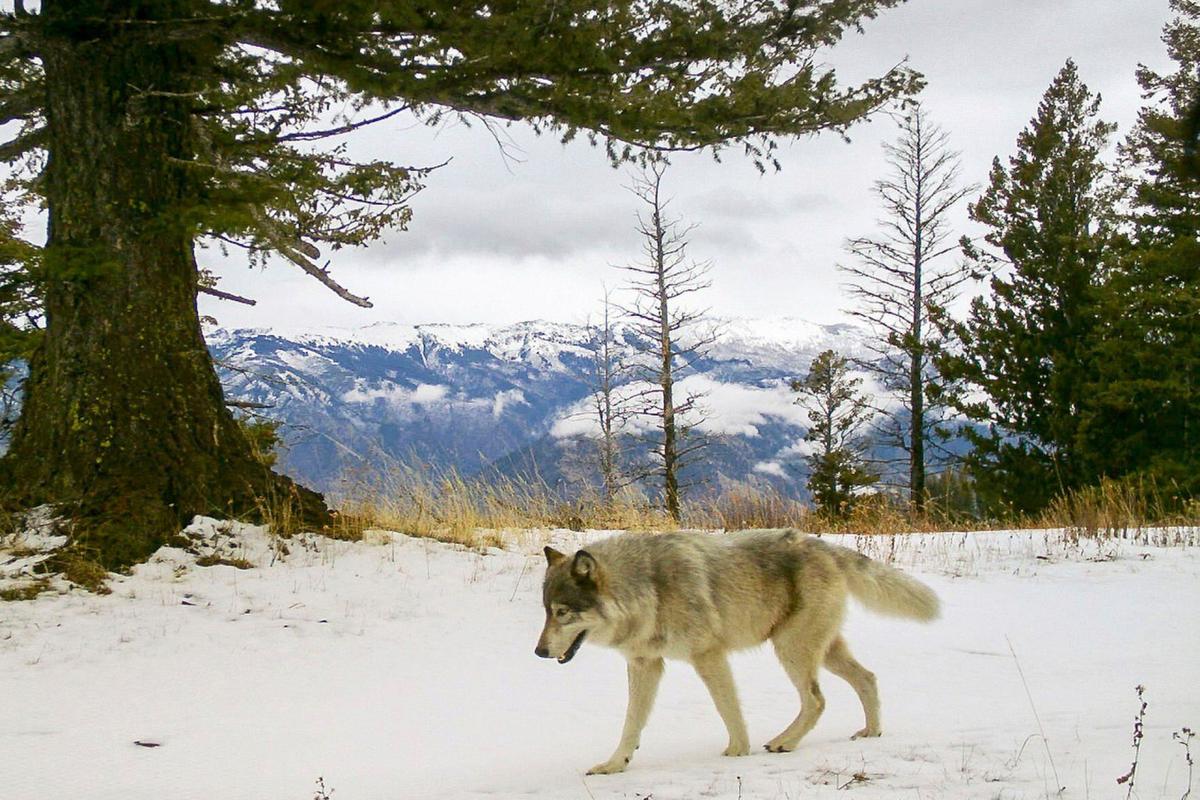 In this 2014 photo released by the Oregon Department of Fish and Wildlife, a wolf from the Snake River Pack passes by a remote camera in eastern Wallowa County, Ore.

BILLINGS — A U.S. government attorney urged a federal judge Friday to uphold a decision from the waning days of the Trump administration that lifted protections for gray wolves across most of the country, as Republican-led states have sought to drive down wolf numbers through aggressive hunting and trapping.

Wildlife advocates argued that the state-sponsored hunts could quickly reverse the gray wolf's recovery over the past several decades in large areas of the West and Midwest.

They want U.S. District Judge Jeffrey White in Oakland, California to put wolves back under the legal shield of the Endangered Species Act, which is meant to protect animals from extinction.

Federal officials contend that wolves are resilient enough to bounce back even if their numbers drop sharply due to intensive hunting. They say protections are no longer warranted.

At stake is the future of a species whose recovery from near-extinction has been heralded as a historic conservation success. That recovery also has brought bitter blowback from hunters and farmers angered over wolf attacks on big game herds and livestock.

Friday's hearing focused on a much more arcane, legal issue: Were wolves properly classified under the endangered act prior to losing their protected status last year?

A U.S. Justice Department attorney said they were not, because of changes to the act by Congress in 1978. That means the wolves at issue do not make up a valid "species" that is distinct from a smaller number of wolves not included in November's decision to lift protections by the U.S. Fish and Wildlife Service .

"Congress was very clear in the statute: If there is not that species, the service does not have the ability to regulate it," said Michael Eitel with the Justice Department's natural resources division.

Judge White questioned if the government's approach amounted to a "back door" way to remove protections.

Eitel said in response that the wildlife service was "not trying to skirt its obligations" to wolf recovery, but attorneys for the wildlife groups insisted it was.

"They cannot take this shortcut," said Kristen Boyles with Earthjustice, representing Defenders of Wildlife and other groups. "One of the casualties of the Fish and Wildlife Service argument is that we are not here today talking about the key issues of what protections wolves need, where those protections are needed."

White did not issue an immediate ruling.

The lawsuit does not cover wolves in all or portions of six states in the northern U.S. Rocky Mountains, where the animals lost protections a decade ago.

Federal officials in September said they would consider if those protections should be restored in western states in response to loosened hunting rules in Idaho and Montana. That could take a year or longer.

In Wisconsin, where hunters surpassed a state harvest quota last winter and killed 218 wolves in just four days, this season's hunt was recently put on hold by a state judge, two weeks before it was set to begin.

Conservatives on a state wildlife board had set Wisconsin's kill limit at 300 wolves, prompting a lawsuit from wildlife advocacy groups and a federal lawsuit from a half-dozen Chippewa tribes, which consider the wolf sacred.

A state agency controlled by Democratic Gov. Tony Evers later took the unprecedented step of unilaterally reducing the kill limit to 130 wolves, openly defying the board.

Wolves once ranged most of the U.S. but were wiped out in most places by the 1930s under government-sponsored poisoning and trapping campaigns.

A remnant population in the western Great Lakes region has since expanded to some 4,400 wolves in Michigan, Minnesota and Wisconsin.

More than 2,000 wolves occupy six states in the Northern Rockies and Pacific Northwest after of the animals from Canada were reintroduced in Idaho and Yellowstone National Park starting in 1995. Protections for wolves in the Rockies were lifted over the last decade and hunting of them is allowed.

However, wolves remain absent across most of their historical range. Wildlife advocates argue that continued protections are needed so they can continue to expand in California, Colorado, Oregon and other states.

The Biden administration's defense of the removal of protections under Trump has angered environmentalists who hoped the election of the Democrat would shift U.S. policy on wolves.

Democratic and Republican administrations alike, going back to former President George W. Bush, have sought to remove or scale back federal wolf protections first enacted in 1974.

FILE - This June 29, 2017, file remote camera image provided by the U.S. Forest Service shows a female gray wolf and two of the three pups born in 2017 in the wilds of Lassen National Forest in Northern California. Trump administration officials on Thursday, Oct. 29, 2020, stripped Endangered Species Act protections for gray wolves in most of the U.S., ending longstanding federal safeguards and putting states in charge of overseeing the predators. (U.S. Forest Service via AP, File)

In this 2014 photo released by the Oregon Department of Fish and Wildlife, a wolf from the Snake River Pack passes by a remote camera in eastern Wallowa County, Ore.