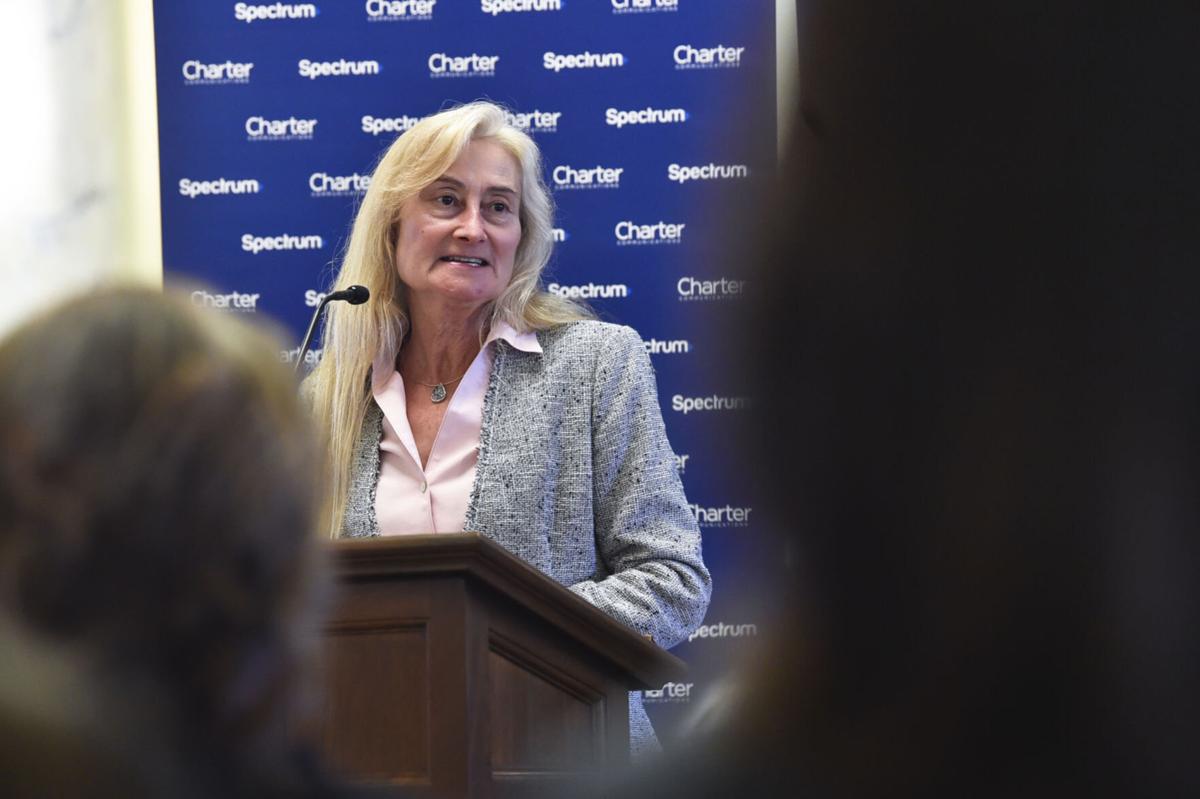 First lady Susan Gianforte speaks at a Women’s History Month celebration in March at the state Capitol on March 18.

Spokeswoman Brooke Stroyke said Tuesday the first lady had taken a COVID-19 test Monday and received a positive result Tuesday, adding that she has exhibited no symptoms.

“The governor continues to exhibit mild symptoms, including fatigue, but otherwise feels OK,” Stroyke wrote in an emailed response to questions.

No one else in the governor’s office has tested positive in the past week, Stroyke said, including 25 staff members who were tested Tuesday morning and received negative results.

She added that Gianforte, a Republican who will turn 60 later this month, is continuing to work remotely from his home in Bozeman. He plans to isolate for 10 days on the advice of his doctor and public health guidance.

Gianforte received his first dose of the Pfizer COVID-19 vaccine last week. While the vaccine is about 95% effective, a person does not get full immunity until two weeks after their second dose, according to the Centers for Disease Control and Prevention.

The governor had mild symptoms Sunday and tested positive for COVID the following day, his office stated previously. He had attended an Easter service at his church prior to developing symptoms.

Gianforte notified all of his close contacts since his last public event on Thursday, the Associated Press reported. Those contacts were with a staff member, a member of his security detail, family members and friends with whom he had dinner, according to Stroyke.

He continues to encourage people to get the vaccine and take "commonsense precautions" to prevent the spread of the coronavirus, Stroyke told the AP.

Elsewhere in the Capitol, no legislators have received positive COVID tests since March 22, Kyle Schmauch, a spokesman for the Senate GOP, told the Montana State News Bureau. A total of six lawmakers have tested positive since the legislative session began Jan. 4.

Dylan Klapmeier, a spokesperson for the House GOP caucus, said in a press call Tuesday no members of GOP House leadership have been contact-traced from Gianforte's positive case. Gianforte was last on the House floor Wednesday, Klapmeier said.

Gianforte was observed in the House anteroom, next to the floor, Thursday afternoon.

Schmauch said the Legislature's COVID-19 panel is not aware of any other lawmakers who have been identified as a close contact of Gianforte. Contact tracing was done through the county health department, he said.

One branch of government in Montana rejecting the power of another would be unprecedented, except this was the second time it'd happened in less than a week.

In an uncommon procedural move by Democrats, House Bill 427 was indefinitely postponed on the Senate floor.

Giles confirmed as head of Dept of Administration

The new law requires that either county commissioners or the city council, whichever entity oversees a local health board, approve of that board or officer's regulations put in place.

Montana Democrats on Monday filed a lawsuit against Secretary of State Christi Jacobsen.

First lady Susan Gianforte speaks at a Women’s History Month celebration in March at the state Capitol on March 18.