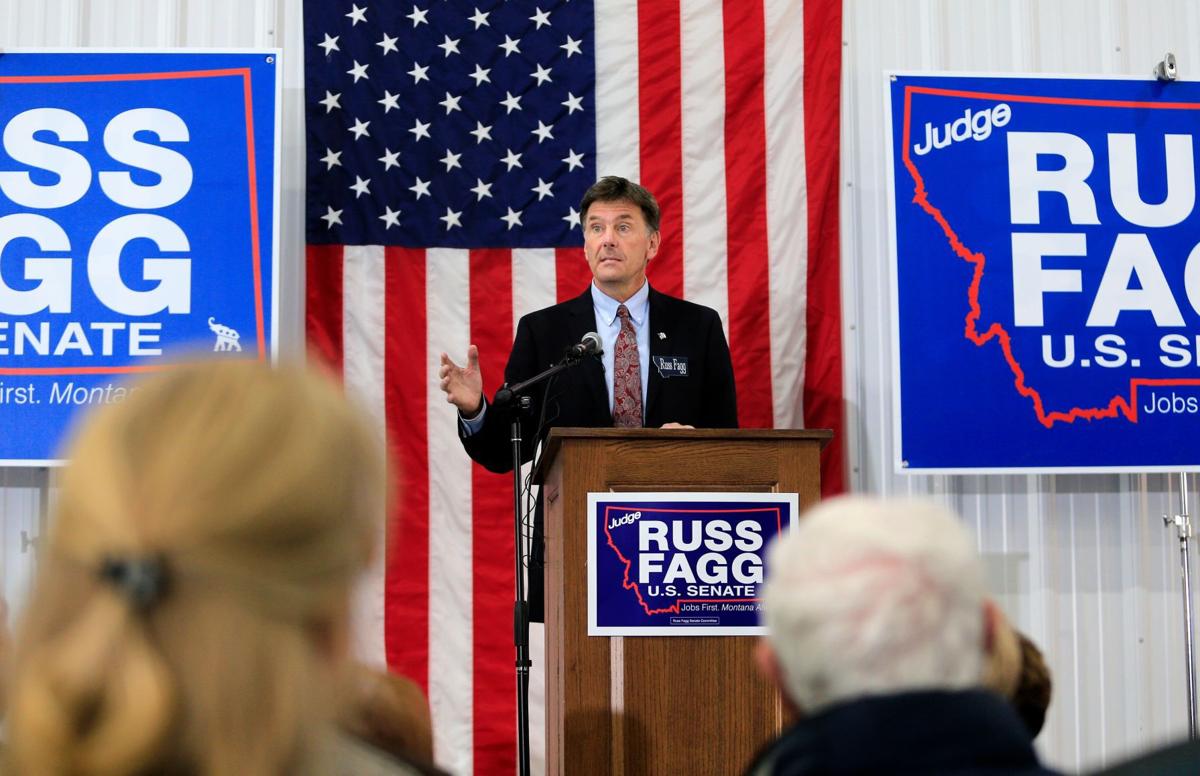 Former judge Russell Fagg announces his run for Senate at Billings Flying Service Inc. west of the airport on Saturday, October 14. Fagg will be running for Tester's seat. 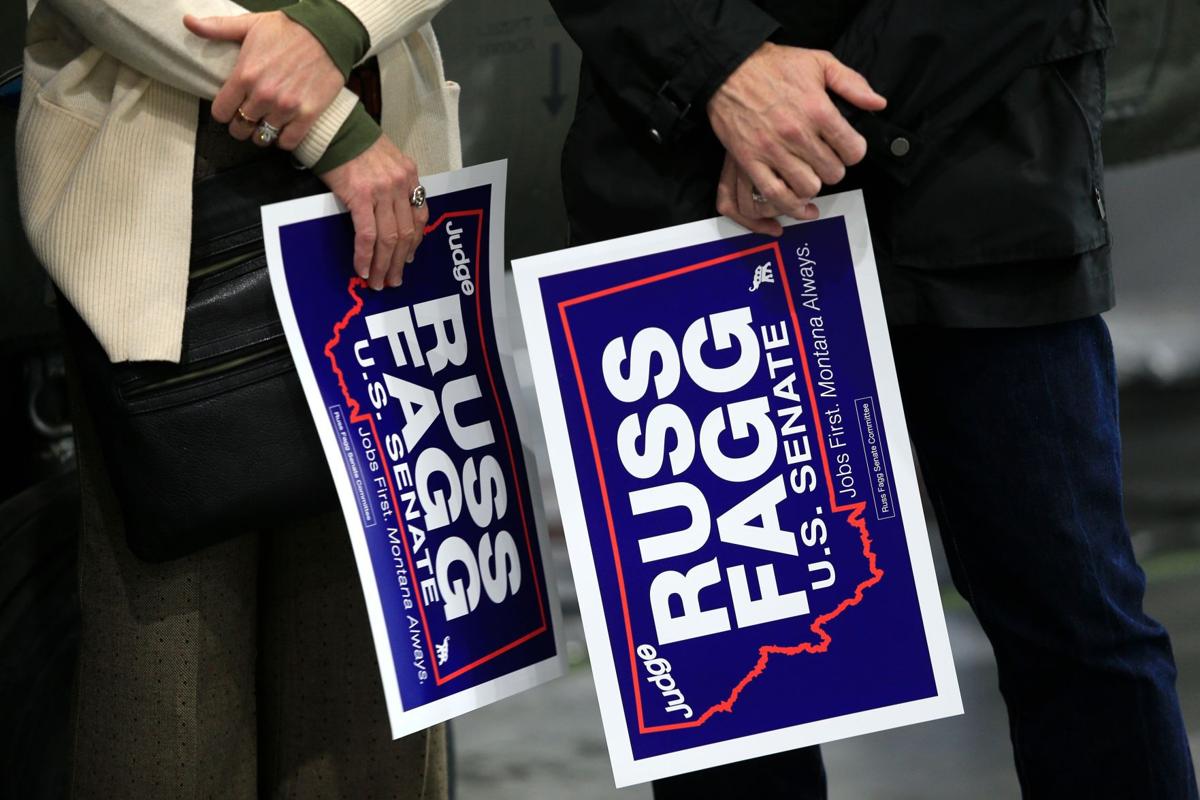 Fagg supporters hold signs before the event at Billings Flying Service Inc. west of the airport on Saturday, October 14. 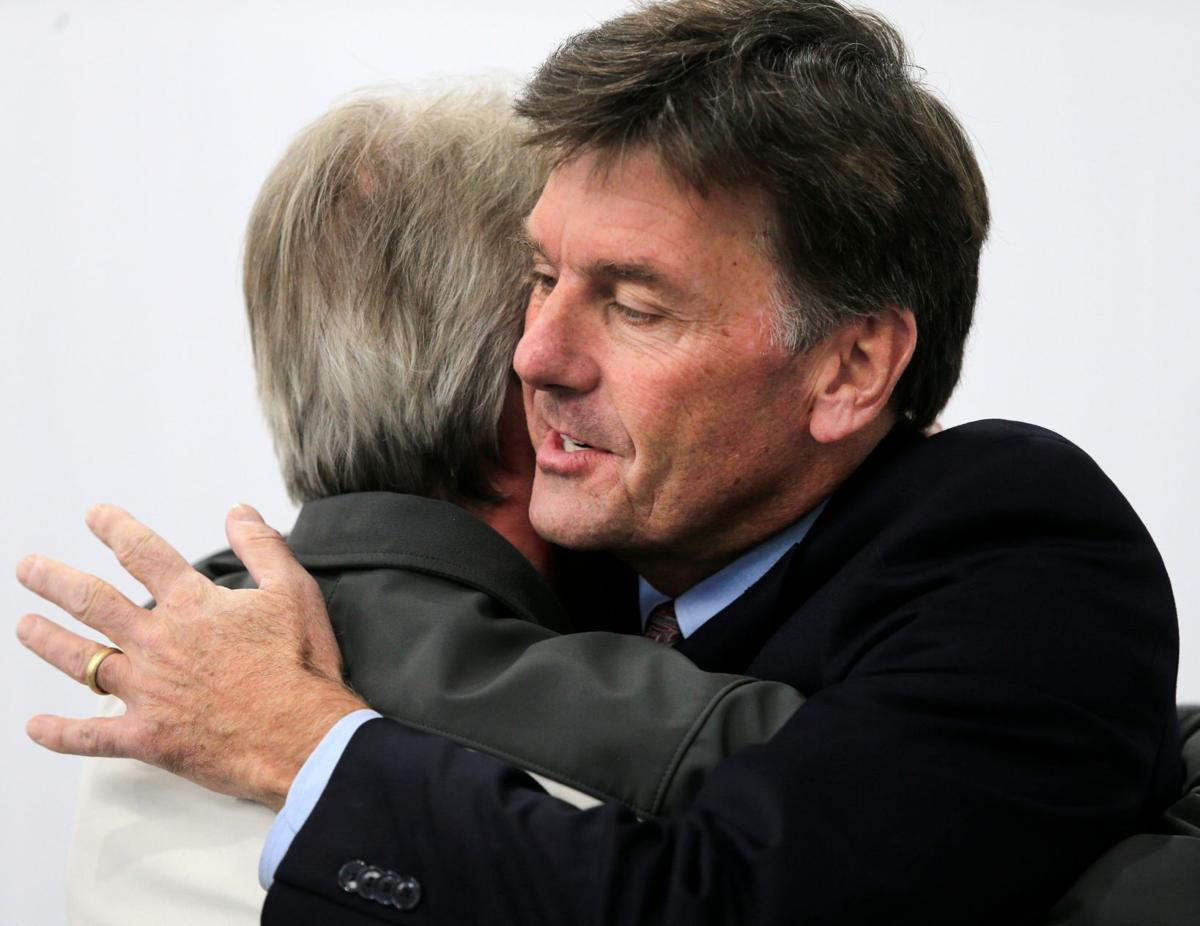 Russell Fagg hugs a supporter before his event at Billings Flying Service Inc. west of the airport on Saturday, Oct. 14. 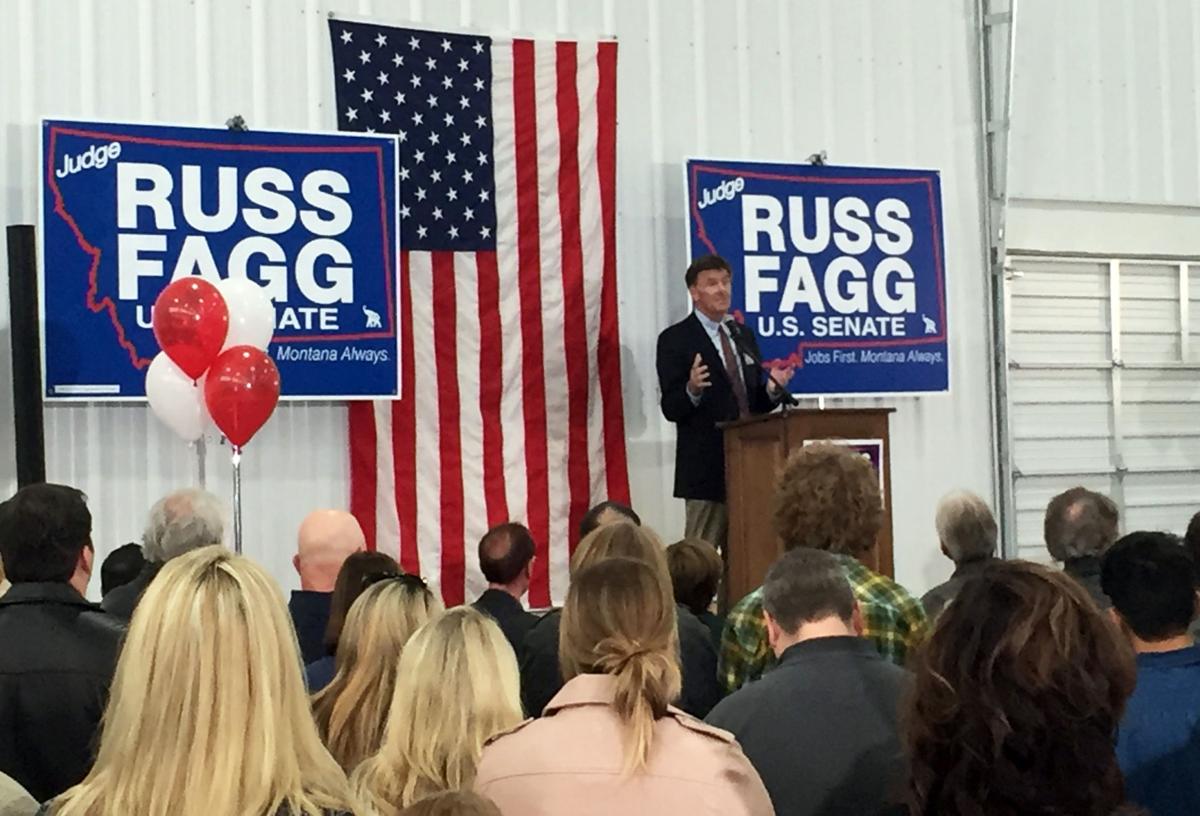 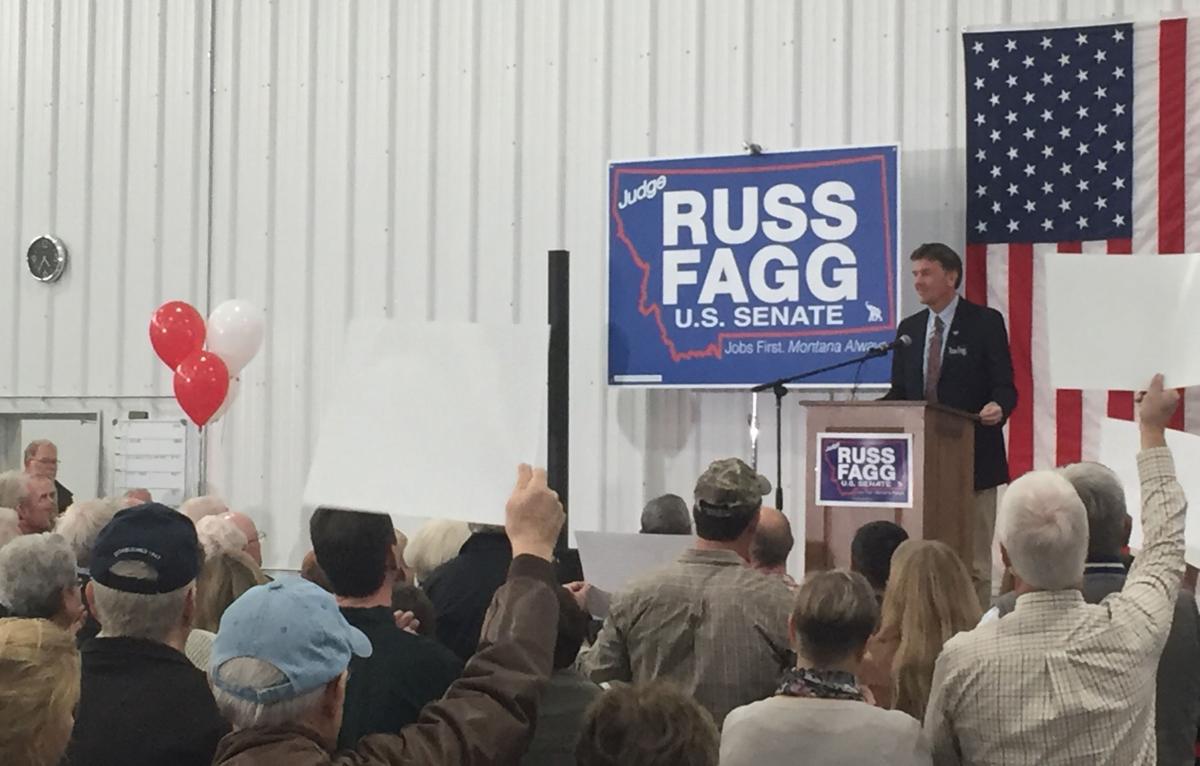 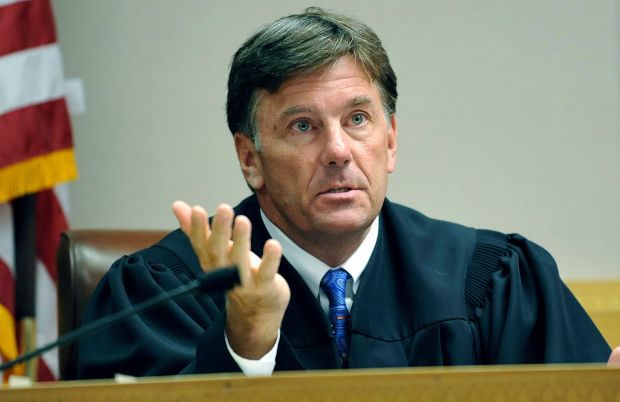 Retired Judge Russell Fagg let Billings in on one of the worst-kept secrets in Montana politics on Saturday: the Republican is running for U.S. Senate.

The announcement, made at Billings Flying Service early Saturday evening, put an end to Fagg’s four-month exploratory committee. He will barnstorm the state over the next four days explaining his decision to join a field of five Republican candidates vying to challenge two-term incumbent Democratic Sen. Jon Tester.

Fagg would take the stage about 30 minutes after more than 100 people filed through the doors to the helicopter hangar, but the campaign signs behind the trailer bed from which Fagg would later announce his candidacy hinted at his intentions.

"Jobs First. Montanans Always," replaced the words "Exploratory Committee" which had previously rested below the outline of Montana on Fagg's political signs.

Three minutes into his speech, after being introduced by childhood friend and BFS co-owner Al Blain, Fagg stated his intentions.

"Tonight, for the very first time, I’m publicly announcing that I am going to run for the United States Senate," he said.

Fagg went on to describe a 22-year career as a judge during which he said he saw 25,000 cases. "I've seen all kinds of tragedy but I know there's one theme that runs through all of this. I think I'm in a unique position through these 25,000 cases," Fagg said. "If we could raise jobs and opportunities and increase the economy and reduce poverty, a lot of these issues would be easier for people to deal with."

He also touted the endorsements he said he had received, naming former Governors Marc Racicot, Judy Martz and Stan Stephens among his supporters, in addition to former U.S. Representatives Rick Hill and Denny Rehberg. Later, Fagg criticized Tester on issues including his vote for the Affordable Care Act, commonly known as Obamacare, and also his vote against President Donald Trump's nomination of Judge Neil Gorsuch to the U.S. Supreme Court.

Fagg called Tester a "nice man," but said "probably the granddaddy of all issues" is what he sees as Tester's failure to abide by "ethical principles." Fagg cited a February 2016 trip to Cancun for Tester and his wife Sharla Tester, paid for by Missouri U.S. Sen. Claire McCaskill, as proof of this.

The St. Louis Post-Dispatch reported in May 2017 that Tester included the $7,410 trip on his 2016 senate financial disclosure forms and that a spokesman for McCaskill described the trip as a birthday celebration.

While an announcement tour of Montana lies immediately ahead for Fagg, he said in the coming months he will continue to add to his staff, which currently counts a few part-time members.

Democrats identified Fagg as a Republican front-runner in June, when the District Court judge of 20 years announced he would leave the court in October, return to private law practice and possibly seek public office.

Possibly seeking public office quickly turned to likely and then almost definitely as the judge formed an exploratory committee for a U.S. Senate candidacy. Democrats almost immediately began casting aspersions about Fagg’s exploratory committee, calling not only a poorly disguised Senate campaign, but also a run for public office by a sitting judge — something Montana’s judicial canon does not allow.

The Montana Democratic Party has crafted its message almost equally against Fagg and State Auditor Matt Rosendale to the near exclusion of the other three Republican candidates for U.S. Senate.

“It’s probably more than tea leaves,” political scientist Craig Wilson said of the Democrats’ reading of the Republican candidates. “It’s probably polling. These are the guys who have name ID.”

Wilson sees the U.S. Senate seat as incumbent Jon Tester’s to lose. The two-term Democrat and farmer from Big Sandy campaigns effectively in rural communities. Tester has also done well in Yellowstone County, which Democrats have to at least lose narrowly in order to win a statewide election.

Rosendale has been on statewide ballots twice, once for auditor in 2016 and also the 2014 Republican primary for U.S. House of Representatives, which he lost to Ryan Zinke. Fagg hasn’t been a statewide candidate, but he’s a ballot regular in Yellowstone County District Court races.

Because Yellowstone County has one-eighth of the vote in statewide elections, it’s no small matter that Fagg is the hometown candidate.

Chris Meagher pens most of the Montana Democratic Party’s attacks on Republican Senate candidates, dropping a few emails to the press every week with assembly-line precision. Meagher includes Big Sky Republican Troy Downing in the discussion of Republican front-runners, although he writes on Rosendale and Fagg each on a six to one ratio to his Downing emails.

The Republicans who are getting no mention by the Montana Democratic Party are Ron Murray, of Belgrade, and state Sen. Dr. Al Olszewski, a Kalispell doctor, though Olszewski did garner a single press release by Democrats after becoming the first Republican to announce his candidacy. Newly filed Republican James Dean is not on Democrats' radar.

Early on with Rosendale, the Democrats’ focus was on Obamacare repeal. As auditor, Rosendale is Montana’s insurance commissioner. Lately, the focus has shifted to tying the Maryland native-turned-Eastern Montana rancher to Steve Bannon, President Donald Trump’s former chief strategist and champion of ousting Senate Majority Leader Mitch McConnell, of Kentucky.

“With Rosendale, obviously all the Bannon stuff that's coming out — who is he associating himself with?” Meagher said. National media reports that a Bannon ally group called Great American Alliance backs Rosendale. “Bannon is making it pretty clear in news articles that one of his main conditions for a candidate is that they would vote against Mitch McConnell.”

The messaging against Fagg from the beginning had focused on whether the Republican’s exploratory campaign was ethical.

Fagg fired back at the editor, arguing that he was still “testing the waters,” all allowed by judicial ethics standards.

On Oct. 6 national Democratic groups joined the ethics targeting. The American Democratic Legal Fund announced that it had filed a complaint with the Federal Elections Commission that Fagg’s exploratory committee was violating federal election law.

More than a week after ADLF said it filed, the Federal Elections Commission has no record of receiving the complaint. The Gazette has called the FEC daily to check on the status of alleged filing.

The announced filing by ADLF includes a quote by the group’s Brad Woodhouse. Woodhouse, according to the Center for Responsive Politics, is a former strategist for President Barack Obama and a former communications director for the Democratic Senatorial Campaign Committee. Woodhouse is also past president of American Bridge Political Action Committee, a key funding source for ADLF.

Emails sent by The Gazette to an address provided by ADLF as its only contact option were returned with an "undeliverable" notice.

Fagg told The Gazette the claims against him are baseless.

“To me the only answer is the Judicial Standard Commission has given me a clean bill of health,” Fagg said.

Darrell Ehrlick: We should be asking the judge...

In one of my favorite stories about former Billings Mayor Willard Fraser, he once became incensed at The Billings Gazette for, well, speaking …

Russ Fagg: 'Testing the waters' has been above board

I have a strong belief it is important to be able to disagree on issues without being disagreeable. So let me simply say to Darrell Ehrlick re…

The gadget that transformed a Las Vegas terrorist’s semiautomatic rifles into machine gun-style weapons is under criticism, but Montana’s cong…

As health care battle reignites, Daines and Tester once again are on opposing sides

Montana’s Senate delegation is picking up where it left off on repealing the Affordable Care Act as lawmakers prepare for another vote, possib…

Don Harris has been named as the new district court judge for Yellowstone County.

Former Billings legislator Lynda Moss has joined the list of Democrats running for the U.S. House.

When it came time to hang a robe on the shoulders of Don Harris for the first time as a judge, there wasn't one immediately available.

Former judge Russell Fagg announces his run for Senate at Billings Flying Service Inc. west of the airport on Saturday, October 14. Fagg will be running for Tester's seat.

Fagg supporters hold signs before the event at Billings Flying Service Inc. west of the airport on Saturday, October 14.

Russell Fagg hugs a supporter before his event at Billings Flying Service Inc. west of the airport on Saturday, Oct. 14.