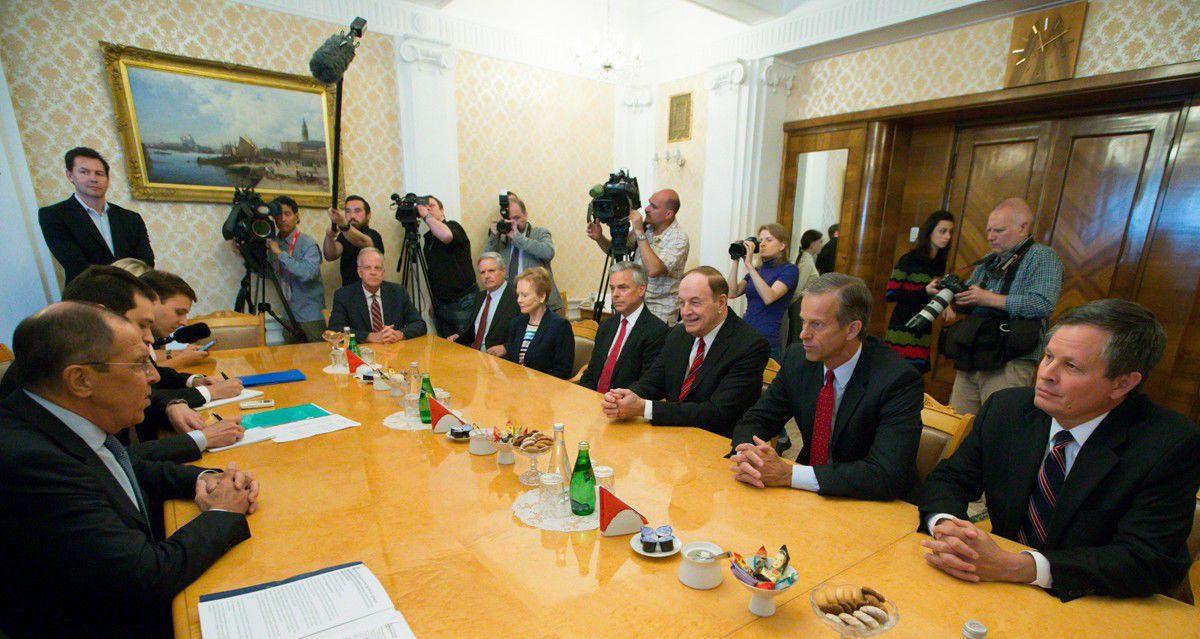 Russian Foreign Minister Sergey Lavrov, left, listens to U.S. Sen. Richard Shelby, R-Ala., third right, during a meeting with a U.S. congressional delegation in Moscow. The U.S. group, including Montana's Sen. Steve Daines, at far right, is scheduled to meet with senior Russian officials amid preparations for a summit between the nations' presidents. 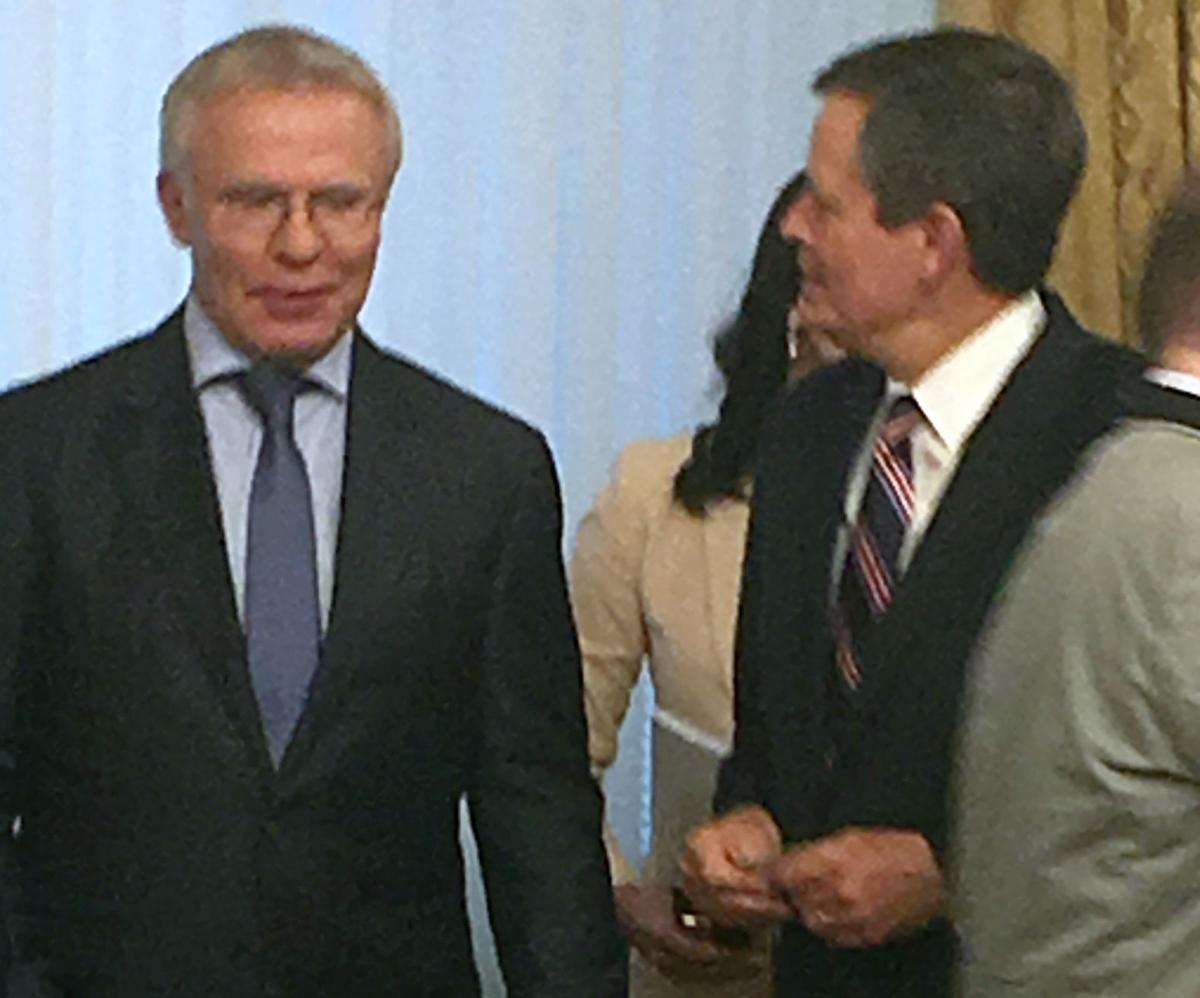 Sen. Steve Daines, R-Mont., right, speaks in Moscow on July 3 with Viacheslav "Slava" Fetisov, a member of the upper house of the Federal Assembly of Russia and chair of the World Anti-Doping Agency Athletes Committee.

Speaking during a press call Monday, Daines said the all-Republican delegation of eight lawmakers had several things to discuss with the Russian officials, among them election interference, the Russian invasion of Crimea and Syria.

“Key messages that we sent to the Russian leaders in every meeting we had was first, don’t interfere in our election. Second, respect the sovereignty of Ukraine and exit Crimea,” Daines said. “Third, work with us not against us in bringing peace to Syria. We’re concerned, certainly, with Russian and Iranian involvement in southern Syria that presents a very direct threat to the security of Israel.

“Fourth, was violation of the (Intermediate-Range Nuclear Forces) Treaty,” Daines said. “That is medium- and short-range nuclear weapons. We believe they have been in violation. So does the world.”

The delegation met with Sergey Lavrov, Russian Foreign Minister, and Sergey Muromtsev, chairman of the state Duma, the Russian equivalent of House speaker.

One member of the delegation, Sen. John Kennedy, R-La., told the Associated Press that Lavrov is a bully and that dealing with the Russian government was like “dealing with the mafia.” Kennedy advised against trusting Russian President Vladimir Putin, who President Donald Trump is expected to meet with in private later this month.

Another member of the delegation, Sen. Ron Johnson, R-Wis., suggested America should reconsider sanctions imposed on Russia for invading Crimea, saying they didn’t appear to be working well.

All members of the delegation have told similar stories about warning the Russians about election interference. They recommended no specific steps to be taken should Russia meddle in U.S. elections again. The other members were Sen. John Hoeven, R-N.D.; Sen. Jerry Moran, R-Kan.; Sen. Richard Shelby, R-Ala.; Sen. John Thune, R-S.D.; and Rep. Kay Granger, R-Texas.

U.S. Ambassador to Russia Jon Huntsman Jr., told the delegation the relations with Russia were at their lowest since the end of the Cold War, Daines said. The two nations possess 90 percent of the world’s nuclear weapons, a fact that should compel the countries to improve relations, he said.

Russia has grown increasingly hostile to American democracy and the U.S. economy. Both House and Senate intelligence committees have concluded that Russians made aggressive moves to influence the U.S. elections by agitating existing divisions within American society.

The House Permanent Select Committee on Intelligence concluded that Russia used 36,746 automated Twitter accounts to produce 1.4 million unique tweets leading up to the 2016 election. The accounts incited racial divisions and promoted anti-Muslim and anti-immigrant messages while speaking positively about Trump and negatively of Democrat Hillary Clinton.

On Facebook, Russian operators generated election-related “malign influence” posts that reached the news feeds of 29 million Facebook users, according to the House committee. Based on the number of “shares,” “likes” and “follows” on the Russian content, 129 million people may have received Russia’s malign influence content, Facebook told House investigators.

The Senate Select Committee on Intelligence concluded July 3 that Russia meddled in the 2016 U.S. election specifically to help Trump get elected.

The attacks on the United States didn’t end with the 2016 election, but also involved U.S. energy policy. On June 11, the House Committee on Science, Space and Technology concluded that between 2015 and 2017 the Russian Internet Research Agency used social media platforms to disrupt energy markets and influence domestic policy.

American energy production is at record levels, according to the U.S. Energy Information Administration. That production threatens Russia’s economy, both by driving down global oil prices as supplies increase, and by transforming the United States into a global supplier of liquid natural gas.

“Energy is one of the most strategic cards we have to play in this fight,” Daines said. “It’s very important that we continue building out more pipeline infrastructure in this country so we can get more (liquefied natural gas) over to Europe, for example. When Russia supplies over 30 percent of Europe’s energy, 50 percent of Germany’s energy, that puts Europe, and more specifically Germany at the mercies of Russia. Europe in particular would be much better served and secure if they moved their energy dependence on the United States instead of onto Russia.”

Russian social media attacks have been well received by Americans on social media. One bogus Russian account posing as the Tennessee Republican Party on Twitter with the handle @TEN_GOP had more followers than the actual Tennessee GOP Twitter account, according to the House Permanent Select Committee on Intelligence.

“After tweeting ‘We love you, Mr. President’ to Donald Trump, @TEN_GOP received a thank you from the presidential candidate,” the committee reported

Daines learned firsthand how quickly misinformation can spread after becoming the target of Twitter outrage July 4. The senator posted photographs of his July 4 evening with his wife in Washington D.C. Twitter users accused the Daineses of using stale photos of a D.C. evening to hide spending Independence Day in Russia.

Fireworks over the Washington Monument and the U.S. Army Band and Stars and Stripes Forever. Proud moment. pic.twitter.com/sgPLfriy8n

In the week leading up to the Russia trip, Montana Democrats editorialized that Daines would be in Russia for Independence Day.

Steve Daines is an imbecile. Not only was he not in DC, he's in Russia, but he didn't post this to coincide with local times and events. A quick Google would have let him know that DC fireworks start after 9, which is 90 minutes after this post. Shenanigans! https://t.co/N2I8dB4rEO

Daines was in D.C. He returned early so he could fly with Trump on Air Force One to a July 5 campaign rally in Great Falls.

“It’s very important that we all have the responsibility to get facts, but it does show the power of social media,” Daines said Monday. “This is the new world we live in in social media, there’s a lot of fake news out there. Unfortunately it's everywhere on social media. I think it goes back on all of us to confront it. Set the record straight as quickly as possible.”

Montana U.S. Sen. Steve Daines, a Republican, will travel to Russia next week with five other senators ahead of a potential Moscow meetup by P…

Sen. Jon Tester: 'We’ve had a long history of people trying to buy our elections'

Montana’s congressional delegation is cautioning President Donald Trump not to proceed with any more Syrian bombings without Senate approval.

The week of the July 4 holiday has earned a reputation as the deadliest for drivers on Montana roads.

A 5-month-old infant who was found early Sunday buried alive face-down under sticks and debris near Lolo Hot Springs is doing well.

Max Baucus, former U.S. senator for Montana and ambassador to China, says the United States is squandering its leadership role in the world, s…

COLUMBUS — Fake news has invaded our culture and shaped our lives at a time when the need for accountable journalism is more important than ever.

There aren’t many Republicans more conservative than Steve Daines, which is why it stuck out this week when the Montana senator sided with Dem…

In 1986, Nicholas Daniloff spent two weeks in a Soviet Union jail called Lefortovo. While he was there, he thought about what it meant to be a…

Russian Foreign Minister Sergey Lavrov, left, listens to U.S. Sen. Richard Shelby, R-Ala., third right, during a meeting with a U.S. congressional delegation in Moscow. The U.S. group, including Montana's Sen. Steve Daines, at far right, is scheduled to meet with senior Russian officials amid preparations for a summit between the nations' presidents.

Sen. Steve Daines, R-Mont., right, speaks in Moscow on July 3 with Viacheslav "Slava" Fetisov, a member of the upper house of the Federal Assembly of Russia and chair of the World Anti-Doping Agency Athletes Committee.