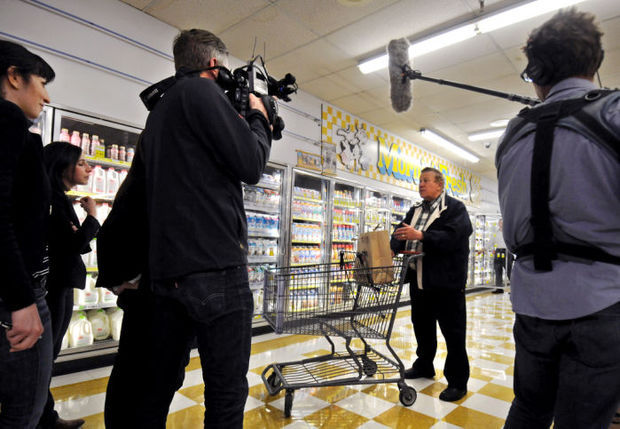 Larry Lussy of Missoula is interviewed by a film crew from Harvard University on Friday afternoon as he shops at Pattee Creek Market in Missoula. Montana has the strictest laws in the nation regarding the “sell by” date for milk. 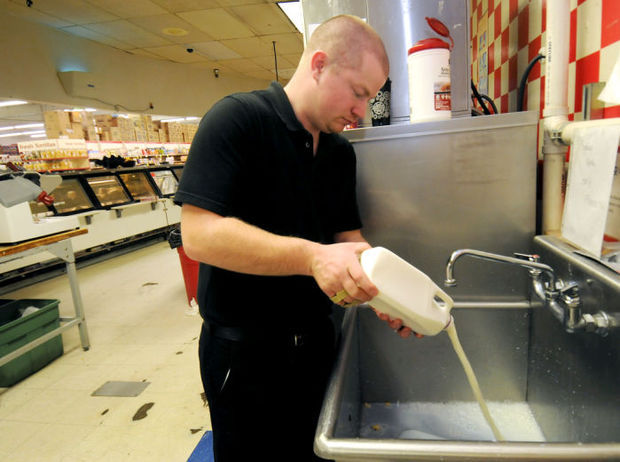 Pattee Creek Market employee David Hall pours milk that has exceeded the "sell by" date down the drain at the store. 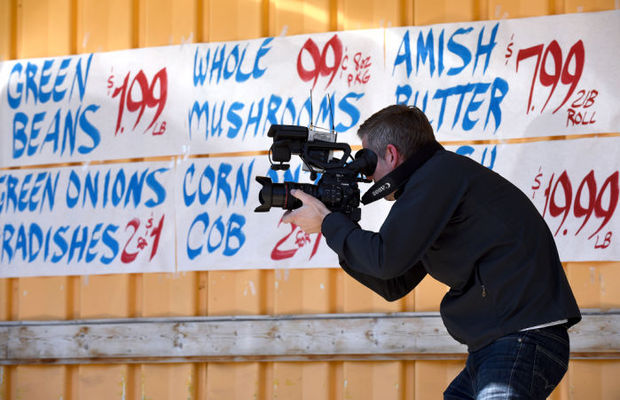 Freelance videographer Nathaniel Hansen and a film crew from the Harvard Law School's Food Law and Policy Clinic are working on a documentary about food waste in America.

MISSOULA — Montana has the strictest law in the nation governing the “sell by” date for milk, forcing grocers to dump untold thousands of gallons of perfectly good food every week.

“This has been part of a long-running interest of ours that’s around how we’re wasting so much of the food we produce in the U.S. We’re looking at how these laws – like the law we’re looking at in Montana – are the cause of that waste,” said clinic director Emily Broad Leib.

Emily Deddens, a law student, said she has been working with Broad Leib and Rebecca Richman Cohen, a filmmaker who teaches media advocacy at Harvard Law School, to illustrate the issue of food waste and how food dates, specifically, contribute to the problem.

“We went through a bunch of big ideas throughout the semester and finally settled on this law in Montana, which requires milk to be thrown out 12 days after pasteurization, and we just thought this is good because it’s such an extreme example of the bigger problem,” Deddens said.

Deddens said only one other state has a requirement for the number of days that milk is allowed to sit on a retailer’s shelf.

“In Pennsylvania it’s 17 days, and in any other state they either have no law at all or they just require a date, but they don’t specify what the date has to be,” she said. “It differs state by state, but many states don’t necessarily regulate whether you can sell or donate the milk even after the date.

“But in Montana, you can’t sell or donate when that 12 days passes.”

Wyoming and Idaho have no specific date labeling requirement.

Montana’s strict law was implemented in 1980 by the Montana Livestock Board, and it has survived many attempts to change it over the years.

Most recently, Rep. Greg Hertz, R-Polson, introduced House Bill 399 this past February aimed at getting rid of the rule, but it was tabled in committee and appears to be dead.

“Montana has a law for 12 days, but studies have shown that it’s just as fresh after 28 days, so we’re trying to understand whether that impacts consumers or what they think that date means,” Broad Leib explained. “It’s arbitrarily very short, and it’s not just a waste of people’s food but a waste of money.

“This law makes no sense. It’s really bad for consumers. But even though Montana is the strictest on milk, other states are strict on other things. Again, it’s not just milk. With all of these foods, it’s a quality date. It’s when the manufacturer thinks you get the peak quality on that food. And yet, 90 percent of consumers think it’s about safety, and they throw perfectly good food away.”

Edwards said dairies don’t want the rule changed, because it means grocers like him have to buy more milk. It also keeps milk prices higher in Montana than in surrounding states.

“Every time I have to throw out a gallon of milk I cringe,” Edwards said. “Because it’s not 50 cents. It’s $2.50, and the grocery business is a penny business.”

Because of the threat of lawsuits, Edwards said he can’t donate the milk to homeless shelters, even though it’s fine to drink for weeks after the “sell by” date. He has found a woman in the Bitterroot Valley who gives it to her horses, but most grocery stores simply send it down the drain or to the landfill.

“Little cartons of milk, they go bad quick,” Edwards explained. “But they’re dated for 30 days or something like that. But the gallons never go bad. Half gallons go bad before gallons because anything in a bigger container will last longer. It’s just like wine. A great big huge bottle of wine will age better than a small bottle of wine.”

“Which is the craziest thing of it, is that the bigger gallons have the sooner dates, but your half gallons have a date that is further out, so it’s the opposite of science,” Broad Leib added.

The women all agreed that most people have no idea that they are throwing out perfectly good milk or that grocery stores are forced to do the same.

“Most people think that if they eat that food after the date, they are going to get sick,” Broad Leib said. “Consumers see one date and think they must throw it away. We’re trying to raise consumer awareness. If you divert some of that food that is going to waste, you can actually alleviate some of the hunger and food insecurity problems in this country. And milk is a very environmentally intensive product to make.”

Richman Cohen said the hope is for the film to play a part in a larger advocacy campaign.

“We hope that it raises general awareness about these laws and expiration dates, the fact that milk, even when it spoils, doesn’t pose a safety risk,” she said. “Pasteurization kills all the pathogens. So it’s going to be a little gross if you drink spoiled milk, but it’s definitely not a danger. So people that are just going based on dates and throwing it out just because of the ‘sell by’ date are costing themselves a lot of money and wasting good food. And so we hope to educate consumers and we also hope to change laws.”

Larry Lussy of Missoula is interviewed by a film crew from Harvard University on Friday afternoon as he shops at Pattee Creek Market in Missoula. Montana has the strictest laws in the nation regarding the “sell by” date for milk.

Pattee Creek Market employee David Hall pours milk that has exceeded the "sell by" date down the drain at the store.

Freelance videographer Nathaniel Hansen and a film crew from the Harvard Law School's Food Law and Policy Clinic are working on a documentary about food waste in America.