The Montana Department of Justice is appealing a state District Court judge’s decision that found a portion of legislation signed into law earlier this year regulating firearms on Montana’s university campuses is unconstitutional.

Lewis and Clark District Court Judge Michael McMahon on Tuesday issued a permanent injunction in the case filed by the Montana Board of Regents over House Bill 102 for segments of the law that stopped the board or university system from prohibiting the carrying of firearms on campuses. The decision does not affect other parts of the law that expand where both concealed and openly carried firearms may be possessed. 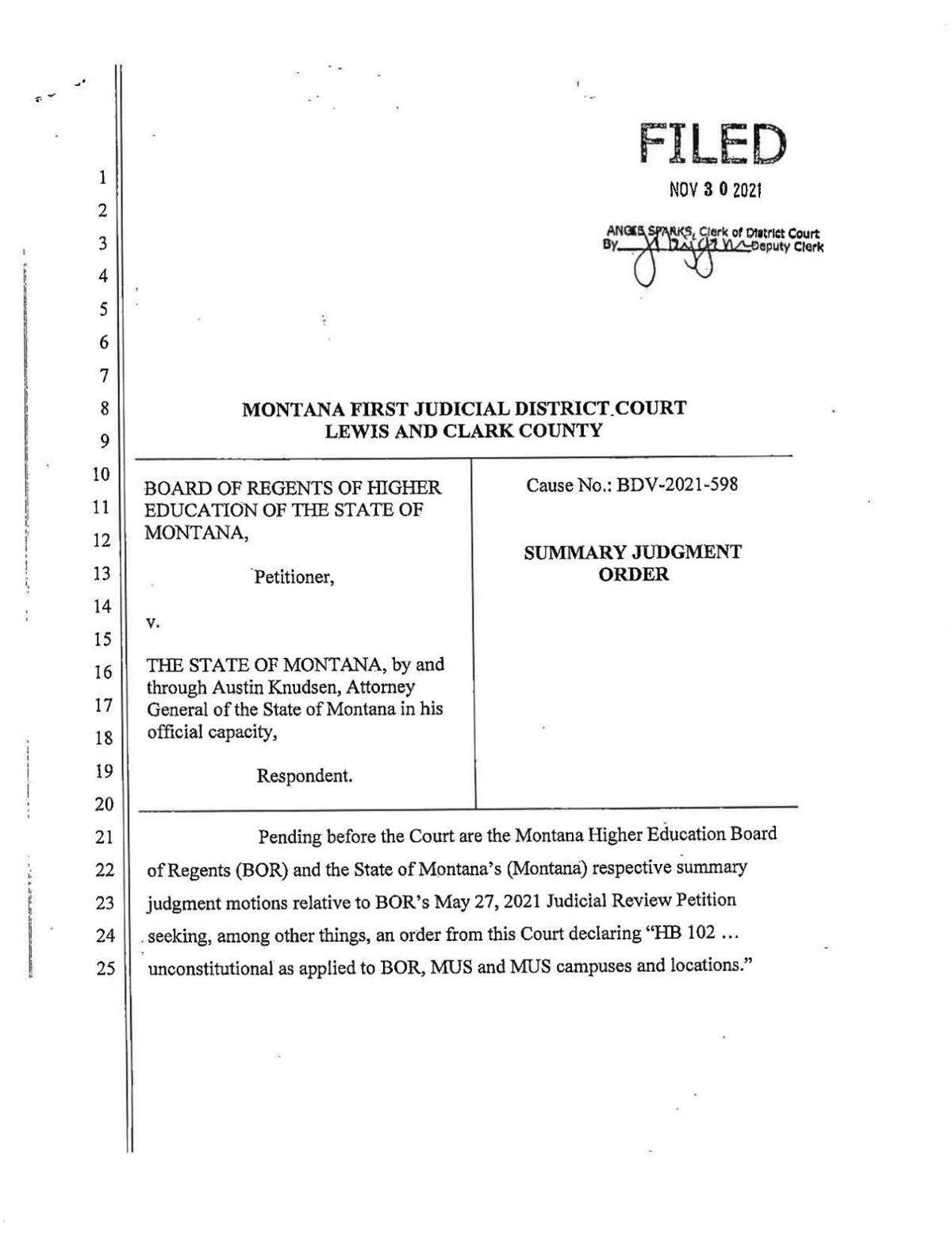 Republican lawmakers lauded HB 102 for its expansion of Second Amendment rights, which they said would increase the ability for citizens to defend themselves. In addition to blocking the Board of Regents from prohibiting the carrying of firearms, it greatly expanded where concealed firearms may be carried without a permit and allows permitted-carry in more places such as establishments that serve alcohol.

In May the Board of Regents filed suit, arguing HB 102 overstepped the board's authority to regulate aspects of the university system, including health and safety. Outside of police or security officers, the board currently prohibits carrying firearms on campuses.

“Full control means just that; the Board is vested with ‘full’ authority to supervise, coordinate, manage and control (Montana University System) and its campuses, which necessarily includes the creation and implementation of firearm policy,” attorneys for the board wrote.

The state, represented by the DOJ, argued in part that the Legislature was well within its power to pass laws for the state that includes public campuses.

“The bottom line is that the Legislature is the Legislature, even on (Montana University System) campuses,” they wrote. “And in many instances, the Board’s policy preferences must yield to the policy of the State — which the Legislature determines and articulates.”

On May 28, McMahon issued a temporary injunction, which was later extended until Tuesday’s ruling.

The judge agreed with the Board of Regents, finding the Montana Constitution is clear in vesting power over the university system and its campuses with the board.

“… While this Court is mindful that Montana has a legitimate interest in protecting the public, it is equally mindful that (the Montana Constitution) provides the (Board of Regents) with a constitutional shield from majority tyranny relative to the governance and control of (Montana University System) property.”

McMahon further cited U.S. Supreme Court decisions ruling that individual rights under the Second Amendment are not unlimited. Those decisions recognize restrictions on felons or those with mental illness possessing firearms as well as limitations on firearms in schools or government buildings.

A Montana Department of Justice spokesperson said Wednesday that the agency had already filed an intent to appeal the decision to the Montana Supreme Court.

“We disagree with the judge’s decision,” spokesperson Emilee Cantrell said in a statement. “State law applies on college campuses. The Board of Regents does not have the power to pick and choose which state laws it will follow. Montanans do not forfeit their constitutional rights when they step foot onto a college campus.”

Board of Regents Chair Casey Lozar noted the pending appeal in his response Wednesday.

“In seeking judicial review of HB 102, we sought clarity on the question of whether the Legislature or the Board of Regents has the authority to regulate firearms on university system property,” he said in a statement. “The board appreciates the clarity provided by the district court yesterday and will await further review by the Montana Supreme Court on appeal.”

Rep. Seth Berglee, R-Joliet, introduced HB 102. On Wednesday he called the language and implications of the decision “shocking," saying that it ceded multiple sections of the Montana Constitution to the board rather than the Legislature. That includes the authority to limit additional rights, he said, such as individual dignity and freedoms including speech, religion, expression and protections related to searches and privacy.

"That unelected Board of Regents members would have the ability to unilaterally limit these constitutional rights should be a concern to all Montanans," he said.

HB 102 was one of the first bills signed into law by Gov. Greg Gianforte, who on Feb. 19 said it allows law-abiding Montanans to defend themselves. On Wednesday a spokesperson for the governor said that he does not generally comment on ongoing litigation, but that “the state will staunchly defend the constitutionality of HB 102 and Montanans' Second Amendment rights.”